The corpus callosum (CC) is a midline cerebral white matter structure, which represents the largest forebrain commissure of tightly packed tracts in the central nervous system, connecting the two cerebral hemispheres. It comprises of four parts, rostrum, genu, body and splenium. It is formed from anterior to posterior, beginning with the genu at 12th weeks gestation. The rostrum is an exception, as it develops last at 18-20 weeks.1-3 If the Corpus callosum does not form prior to birth, it will never form. If there are some corpus callosum nerves crossing between the hemispheres at birth, these may continue to develop, but new nerves or fibers will not develop. Since agenesis of CC is congenital, all the rest of the brain connections are organized accordingly.4 Congenital callosal malformations range from agenesis, hypogenesis or hypoplasia (complete CC but thin). The Callosal hypogenesis (partial absence) is associated with other cerebral malformations, such as migration disorders, Dandy Walker etc.5,6  Abnormal imaging findings can be seen in a person with epilepsy.5  Thus neuroimaging has an important application in the diagnosis and treatment. Computed tomography, combined with EEG recording which has an essential role in confirming the clinical diagnosis, represent the standard clinical practice for a child with recurrent seizures.7,8  Computed tomography is important for the diagnosis of CC lipoma, and other acquired pathologies with calcifications or haematomas' involving the anterior part.9  Agenesis of the corpus callosum is one of the most frequent malformations in the brain with a reported incidence ranging between 0.5 to 70 in 10000.10  Disorders of the CC may be caused by arrested growth, or delayed development that attempts to compensate for earlier abnormalities in the evolution of midline structures. It can also be observed in association with major malformations of the embryonic forebrain prior to formation of the anlage of the corpus callosum e.g., holoprosencephaly.2,11  Currently, MRI which is safe and painless, is the imaging procedure of choice in infants and children. It is recommended in the evaluation of cerebral pathologies and is used in evaluating agenesis of CC, even in patients who have previously undergone CT scan and ultra-sonography examination. The Multiplanner capability and, high soft tissue contrast permits confident diagnosis of agenesis of corpus callosum and its associated anomalies especially neuronal migration anomalies or atypical form of holoprosencephaly.12-14  Magnetic resonance Imaging defines CNS anatomy in detail, permits in-vivo characterization of human brain anomalies, previously incompletely evaluated using CT scan and ultrasonography. Certain anomalies, previously thought to be isolated, have proven to be associated with one or more brain malformations. Thus, MRI sheds new light on a fundamental problem in clinical neuroradiology.15  Corpus callosum and other interhemispheric connections are considered to transfer unilateral abnormal electrical activities to the contra lateral hemisphere.

Magnetic resonance imaging mapping, confirms the genu of corpus callosum, as the major pathway for seizures generalization.16  This study aimed to verify the role of MRI in the diagnosis of callosal disorders among epileptic patients in the paediatric age group.

A descriptive case series on 52 patients was conducted in the radiology department MRI unit, of a major tertiary paediatric health care center (Central Teaching Hospital of Paediatrics'), Baghdad, Iraq, from March 2015 to April 2020. It was an observational study including 52 patients. The Ethical Committee of the Medical College and Central Teaching Hospital of Paediatrics approved the study. Included were 31 males and 21 females with age ranging from 4 months to 14 years. The decision to perform MRI was based on the clinical judgment of the referring paediatric neurologist. All patients included had history of seizures. Demographic criteria collected were age and gender, Imaging of corpus callosum with associated disorders, types, severity and malformations. Measurements were taken at the mid sagittal plain view which clearly defined the four callosal components, rostrum, genu, body, and splenium. Axial plain showed parallel configuration of the lateral ventricles, coronal plains showed midline defects associated with Lipoma, and listhencephaly. Patients were divided according to age (4 months -1 year), (2-5 years) and (6- 14 years). Imaging criteria were based on the identification of complete ACC, partial ACC, hypogenesis, and associated malformations of cortical development, ventricles, posterior fossa and extra-axial spaces. This was a native study without intravenous contrast media as the contrast does not provide a further diagnostic value. Utilizing MRI machine with 1.5 Tesla MEGNATOM Avanto scanner (Siemens, Germany) was employed. Using head coil, with T1, T2, FLAIR and diffusion weighted sequences, with the required plains, sagittal, axial and coronal plains, the corpus callosum appeared as high signal on T1, low signal in T2 and intermediate signal on FLAIR sequences. The duration of each examination lasted about 20 minutes. General anaesthesia was recommended for children under 6 years age and in the older non-cooperative or nervous children. In older children, the examination was explained to both the patient and relatives, to relieve anxiety. Our centre permits the stay of parents in the MRI examination room throughout the test.

Data were collected, summarized, analyzed and presented using Statistical package of Microsoft office Excel 2010. The results of data analysis was presented as mean with standard deviation and ranges to determine the number and percentages (%) per hundred using one sample with a descriptive, quantitative, observational and exploratory analysis design.

The study group comprised of 52 paediatric patients, of various callosal disorders and associated anomalies. The age range of the children was from 4 months to 14 years, with a mean age of 5.94 ± 4.08 years. All patients selected had a history of full term delivery. These results are summarized in Table-1. Magnetic resonance imaging findings of corpus callosum disorders showed, complete agenesis, partial agenesis and hypoplasia representing 9(17.3%), 25(48%) and 18(34%) cases respectively. Associated malformations contributed to 32(62%) cases. Hypoplastic extra colossal and supra tentorial white matter was a constant observation in the entire study group. Pachygyra and Dandy Walker syndrome were the more frequent associated malformations, being 10 (19.2%) and 6 (11.2%) respectively. There was non-specific age or gender distribution of isolated callosal disorders. About one-half of female patients presented with imaging features of both callosal disorders and malformation. 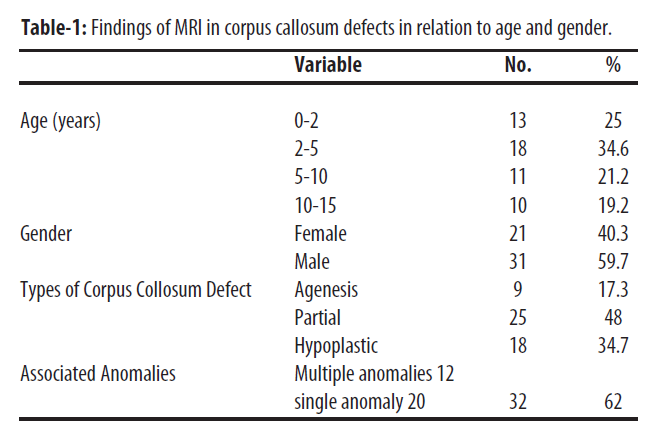 Seventy percent of epileptic male patients had callosal disorders and additional malformations. Table-1 shows the maximum age distribution in the category of 2-5 years. Male gender was more effected, 31 (59.7 %) with partial agenesis in 25 (48%).

Figure-1 displays the associated malformations, with Pachygyra (30.1 %) being more frequent. 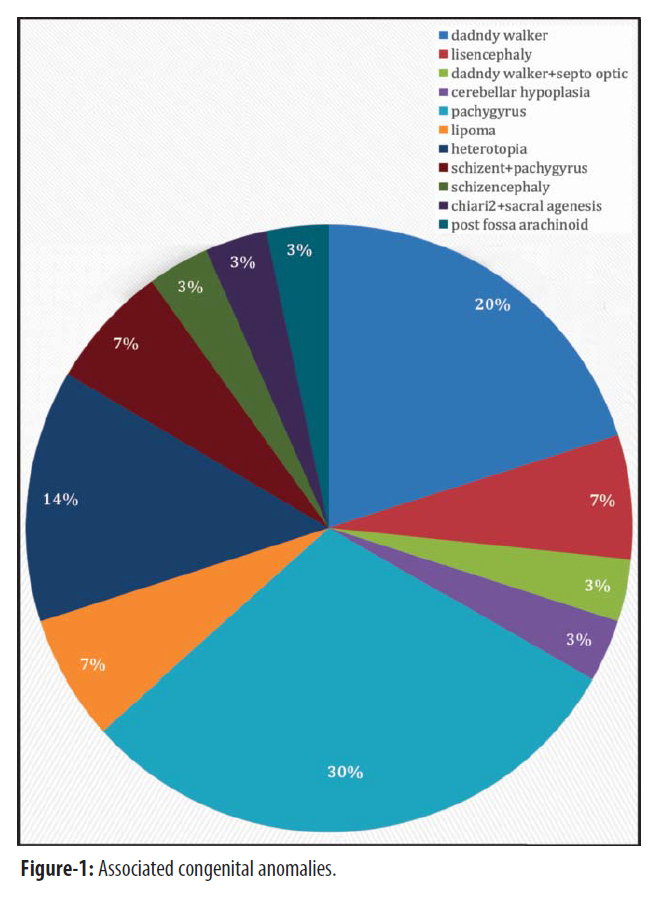 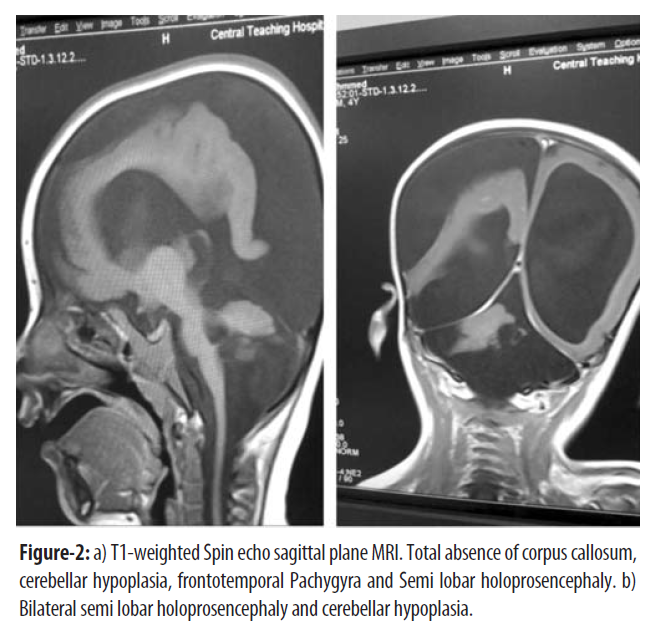 Agenesis of the corpus callosum is an abnormal developmental malformation involving the white matter commissural fibers. It represents the largest intra cerebral connecting white matter bands, between the two hemispheres of the cerebrum. Callosal disorder involvement could be in various forms, complete absence (agenesis), partial agenesis, when the missing component involves one of the portions, genu, body, splenium or the rostrum or is hypo-plastic, when corpus callosum is present without a missing segment but thin or smaller than normal. These abnormalities are diagnosed by various neuro-imaging modalities, Ultrasonography, CT scan and MRI. MRI is the imaging investigation of choice in these circumstances. It utilizes a non-ionizing radiation device, providing an excellent intrinsic soft tissue contrast discrimination with Multiplanner facilities along with providing more comprehensive, additional information which aids in the diagnosis. Nevertheless, it is time consuming with most paediatric patients requiring sedation or general anaesthesia. The specific selection of paediatric patients presenting with epilepsy in the current study was observed as it is the most common clinical association with corpus callosum disorders. In the clinical description of Marie-Laure Moutard, the author describes epilepsy in 50 % of patients presenting with agenesis of corpus callosum.17 Neonatal and prenatal imaging studies suggest that corpus callosum agenesis occurs in at least 1:4000 live births.18  Abnormalities of corpus callosum was almost always accompanied by other brain malformations and grey matter heterotopia was the most common malformation of cortical development.15  In the current series, 32 of the 52 patients presented with associated brain malformations. This makes a figure of 61.6%. The types of individual, accompanied malformations in our study differ with Dandy Walker syndrome, and pachygyra being the most common malformations. Interhemispheric cysts and lipoma were present in 15 patients. In this study, we also found two patients with lipoma and one patient with listhencephaly. The difference in data observation between our study and others,15,17  is related to the inclusion of variable clinical CNS and somatic manifestations in multicentre studies. This will offer a large sample size and more generalizable MRI findings. Enrolling asymptomatic individuals with callosal disorders, with a wider age range, based on retrospective data collection from the database network can raise a doubt on the frequency of the corpus callosum disorders. This study describes the MRI findings of a single tertiary centre on selected symptomatic paediatric patients who presented with epilepsy, with a limited age range showing MRI imaging criteria pointing to congenital anomalies. This represents a superior inclusion criterion. The other factor is the choice of a single centre work up approach, might increase the risk of bias which can modify the results. However, child epilepsy is a critical care emergency situation. A single centre study provides more effective treatment estimates, with a closer follow up observation than a multicentre trial. Extra-callosal, supra-tentorial reduced white matter volume was a constant observation in all cases included in our study. This is in agreement with other studies, as the corpus callosum is the principle transverse white matter tract connecting the cerebral hemispheres.15  In the current series, agenesis and hypoplastic corpus callosum is more in boys than girls which is a similar observation in the literature.12,19  Imaging MRI observation of Partial callosal agenesis is the most common feature, followed by callosal hypoplasia and complete agenesis. This is in accordance with the studies published by Barkovich et.al and Essam et al.1,20

8.       Al-Awadi QH, Al-Bierouti AK. The significance of EEG recording in confirming the diagnosis of epilepsy in cases referred for the 1st time. Mustansiriya Med J 2006; 6:77-85

Maternal and perinatal outcome of pregnant women with COVID 19, a tertiary centre experience in Iraq — A Case Series

Osteochondroma : the local effects and the management