Objectives: To evaluate the response to treatment by the new directly acting antivirals drugs Sofosbuvir and Ledipasvir (Harvoni), on Iraqi patients diagnosed with hepatitis C infection genotype1 and genotype 4.

Methods: This prospective study was conducted in the Gastroenterology unit of Al- Yarmouk Teaching Hospital, Baghdad, Iraq, from February 2019 to February 2020. Included were one hundred patients diagnosed with hepatitis C by antibody test and viral load. All non-cirrhotic participants received a drug containing 400 mg sofosbuvir /90 mg ledipasvir once daily for 12 weeks, whereas the cirrhotics had to take it for 24 weeks. Lab. Investigations and viral load were assessed at baseline, and twelve weeks after end of treatment.

Conclusion: Excellent therapeutic results were achieved with generic combination of sofosbuvir/ledipasvir. The regimen is highly effective and tolerable with the highest viral response observed in HCV patients with genotype 1and 4, inclusive of patients with chronic renal failure or cirrhosis.

Hepatitis C virus (HCV) infection is a leading cause of chronic liver disease globally. The management of HCV infection has revolutionised over the last 20 years due to better comprehension of the pathophysiology of the disease, and because of advancement in investigations and evolution in therapy and prevention.1 In 2016, the World Health Organisation (WHO) announced the first guideline for the eradication of HCV infection by 2030.2 HCV has 6 genotypes: 1a, 1b, 1c, 2a, 2b, 2c, 3a, 3b, 4, 5 and 6. Genotypes 1 and 4 are the most common in the Middle East region.3 The incubation period extends from 2 to 23 weeks (mean 7.5 weeks). HCV patients rarely present with acute liver damage. Those with chronic infection are usually asymptomatic before the onset of cirrhosis, but they frequently complain of fatigue or depression.4

The presence of antibodies indicates infection with virus but does not distinguish if it is an acute, chronic or a previous cleared infection. The anti-HCV antibodies are primarily used for diagnosis, whereas viral load is needed for confirming the infection, for observing the response to treatment, and assessing immunocompromised or haemodialysis patients.5 Evaluation of liver disease severity is essential before treatment. Recognising patients with advanced cirrhosis is also essential because the choice of treatment and prognosis depend on the stage of fibrosis.1

In October 2014, the United States Food and Drug Administration (FDA) approved ledipasvir and sofosbuvir (brand name Harvoni) as among the best treatments for patients with genotypes 1 and 4 irrespective of previous therapy or the presence of cirrhosis.6

The current study was planned to evaluate response to treatment for HCV genotypes 1 and 4 in patients treated with sofosbuvir and ledipasvir.

To our knowledge, this is the first study in Iraq to assess the response rate of treatment of hepatitis C infection genotype 1 and genotype 4 in patients treated with the new directly acting antivirals drugs, sofosbuvir and ledipasvir (Harvoni).

The prospective study was conducted at the Gastroenterology Unit of Al-Yarmouk Teaching Hospital, Baghdad, Iraq, from February 2019 to February 2020. Those included were patients aged >13 years, diagnosed with chronic HCV infection on the basis of anti-HCV antibodies and HCV viral load. The participants received 400mg sofosbuvir / 90mg ledipasvir once daily for 12 weeks for non-cirrhotic, and for 24 weeks for cirrhotic patients.

Excluded were patients having decompensated cirrhosis, those who died due to other medical diseases during the follow-up, those with severe comorbidities, pregnancy or patients who could not use proper contraception, and patients with loss of data about sustained viral response (SVR) post-treatment, and those unable to complete the treatment due to any cause.

Detailed history was taken for each patient, including assessment of other possible reasons of chronic liver disease, or factors that cause worsening of liver disease, such as excessive alcohol intake, past drug exposure, diabetes mellitus (DM), hypertension (HTN), chronic renal failure, malignancy, autoimmune disease, or inherited diseases. Full clinical examination was also performed.

Abdominal ultrasound was performed to determine hepatic echogenicity, or radiological features of cirrhosis, presence of features of portal HTN, and to exclude hepatoma or other pathologies.

The detection for anti-HCV antibodies was performed by a fourth-generation enzyme-linked immunosorbent assay (ELISA). The method and result interpretations were performed according to the manufacturer's instructions (Dynex-AMERICAN).

Statistical analysis was performed by using Statistical Package for Social Sciences (SPSS) version 25. The data was presented as mean, standard deviation and ranges. Categorical data was presented as frequencies and percentages. Paired t-test was used to compare the continuous variables on before and after treatment. A p-value < 0.05 was considered significant 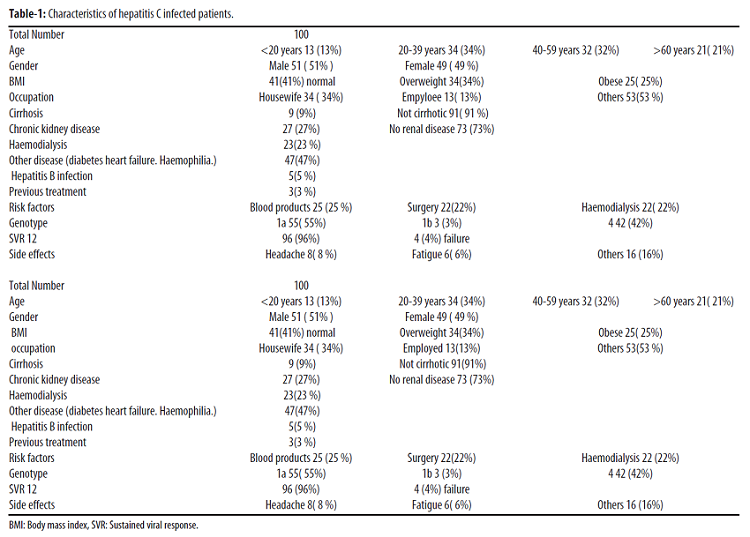 Among the haematological markers, only platelet count was significantly different post-treatment compared to the baseline value (Table-2). 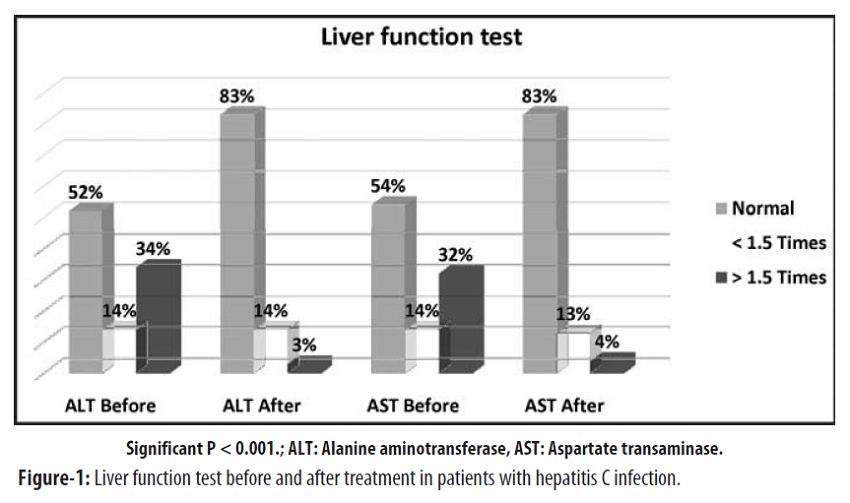 In terms of efficacy and safety of sofosbuvir-ledipasvir, there were no clinically significant treatment related adverse events. Side effects of the drug were noted in 30(30%) patients, hepatic decomposition occurred in 2(2%) patients and both were cirrhotic.

While the results of the current study are close but not similar to other studies in Iraq, which found genotype 4 to be the most common genotype among multi-transfused patients in many sections of Iraq.10-12 This difference could be due to sample size variations and because there are many different genotypes of HCV with various subtypes and strains.

The current study showed that ledipasvir-sofosbuvir therapy achieved 96% success in SVR12. In contrast, the regime with pegylated interferon plus ribavirin was found to be associated with high failure rate, with less than 50% patients achieving sustained virological negativity.13,14

A study in Baghdad on chronic HCV patients reported success in SVR12 treated by sofosbuvir/ledipasvir to be 70.8%. This low response rate could be due to the fact that sofosbuvir and ledipasvir used in Iraq are from different sources.12

The regimen generally was well-tolerated in the current study, with the predominant side effects being fatigue, headache, nausea, arthralgia and increase in weight.

As no alternative drugs are available presently, the benefits of using sofosbuvir/ledipasvir are more than the risk of increase in weight. In addition, in November 2019, the Food and Drug Administration (FDA) approved sofosbuvir-containing drugs to be used in CKD patients even with estimated glomular glomerular filtration rate (eGFR) <30mL/min and those on haemodialysis.22 The current study used sofosbuvir/ledipasvir in 27 HCV patients with renal impairment; 23 on haemodialysis, and 4 had severe renal impairment (eGFR <30). SVR12 was achieved by 26(96.3%) patients, while 1(3.7%) patient failed to respond, and only 2(7.4%) patients showed increased symptoms of uraemia which were related to the underlying disease. These results are similar to those reported earlier.23,24

Among the non-responding patients in the current study, 3 were females, 3 were aged <40 years, and 1 patient had chronic renal failure and was on haemodialysis. Another patient had cirrhosis and 1 patient was HBV-positive. Two patients also had anaemia. The presence of these associated pathologies may influence the treatment and anaemia may need correction before initiation of therapy.

The current study has its limitations. The presence and role of resistance-associated mutations was not assessed even though it can cause significant resistance and can be a cause of non-response. Besides, the sample size was not scientifically calculated but a convenient sample of 100 patients were included, which can cause a decrease in the power of the study.

The treatment regimen of ledipasvir plus sofosbuvir was found to be highly effective in HCV patients with genotypes 1 and 4, as it was associated with minimal side effects and had the highest virological clearance, including patients with chronic renal failure or cirrhosis. SVR12 of 96% may dramatically improve the treatment of HCV in Iraq.

Differential effects of statins on matrix metalloproteinase-9 (MMP-9) in patients with acute ischaemic stroke: A potential for salutary