Differential effects of statins on matrix metalloproteinase-9 (MMP-9) in patients with acute ischaemic stroke: A potential for salutary

Objectives: To illustrate the differential outcome of atorvastatin versus rosuvastatin on matrix metalloproteinases (MMP-9) in patients with acute ischaemic stroke (AIS).

Methods: The case-control study was done in the Department of Clinical Pharmacology and Therapeutic, Mustansiriyah University, Baghdad, Iraq, from March to June, 2020 and involved 66 AIS patients and 22 healthy controls. They sub-grouped into Group A: AIS patient on statins therapy (n=44), with 22 on atorvastatin and 22 on rosuvastatin. Group B: AIS patients not on statins therapy (n=22). Anthropometric, lipid, and pressure profiles were evaluated. As well, MMP-9 level was estimated in different treated groups. SPSS version 20.00 was used for data analysis.

Conclusion: MMP-9 is regarded as a surrogate biomarker of AIS in patients with underlying poor cardio-metabolic profile. Both atorvastatin and rosuvastatin are operative in attenuation of AIS measured by lowering of MMP-9 serum levels.

Stroke is a rapidly growing clinical disorder characterized by a rapid onset of focal and/or global neurological deficit, fixed more than 24 hours. The most reported type of stroke is acute ischaemic stroke (AIS), which represent 60-90.1%, followed by haemorrhagic stroke (HS), which includes subarachnoid haemorrhage (SAH) and intra-cerebral haemorrhage (ICH) and represent 10-30% of stroke patients.1

The risk factors for stroke including non-modifiable risk factors (gender, age, race, genetics and previous stroke history) and modifiable risk factors (diabetes, hypertension, smoking, alcohol intake, polycythemia and obesity).2 In general, there are five unified sources of AIS that are large-artery atherosclerosis (thrombosis/ embolism), cardio-embolism, small-vessel occlusion (lacunae), undetermined etiology (cryptogenic), and other etiology like vasculitis. Cryptogenic stroke is a type of cerebral ischaemia without obvious origin and represents about 20% of all AISs.3

Different mechanisms are involved in the pathogenesis of AIS; increasing evidences show that ischaemic injury and inflammation are the central mechanisms in the pathogenesis and progression of AIS.4 AIS triggers ischaemic cascades, which ultimately results in irreversible neuronal injury inside the ischaemic region.5 AIS-induced neuro-inflammation is due to microglial activations at the acute stage of AIS that elicit an aggressive inflammatory reaction by release of pro-inflammatory cytokines including tumour necrosis factor (TNF-a), matrix metalloproteinase (MMP), chemokines and interleukins (IL-1b) and IL-6.6

MMPs are important group of proteolysis-associated enzymes; cleave fundamental structural elements that maintain blood brain barrier (BBB). Function of MMPs is regulated by specific MMP inhibitors, which are distributed in different tissues.7 Among MMPs, MMP-9 is mainly involved in AIS and over-expressed by neutrophils adjacent to BBB in response to brain injury in AIS. Microglia, astrocyte, and endothelial cells increase MMP-9 expression following brain injury, which is involved in the initial pathological and late repairing events.8

Statins are a class of medications which inhibit HMG-Co-A reductase, a rate limiting enzyme in cholesterol biosynthesis. The interruption of mevalonate pathway by statins is linked the pleiotropic effects of statins.9 Farynsyl-pyrophosphate and geranylgeranyl-pyrophosphate are isoprenoid intermediates that are crucial for prenylation of specific GTPase proteins, which regulate cell differentiation and and cytoskeleton activities.10 In addition, administration of statins during the acute stage of AIS may prevent stroke progression and relapse with reduction of post-stroke complications.11

Therefore, objective of the present study was to demonstrate the differential effect of statins on MMP-9 in AIS patients.

This case-control study was completed in the Department of Clinical Pharmacology and Therapeutic, Mustansiriyah University, Baghdad, Iraq, from March to June, 2020. This study was permitted by Scientific Committee and Editorial Board, College of Medicine, AL-Mustansiriyah University. A total of 88 participants (66 patients with AIS and 22 healthy controls) were involved in this study. The sample size was calculated according to the population size regarding 95% confidence interval and 5% marginal error. At first, 131 AIS patients were recruited, however, 65 of them were excluded due to haemorrhagic stroke (n=12), transient ischaemic attack (TIA) (n=13), acute renal failure (n=15), heart failure (n=9), malignancy (n=7), and liver cirrhosis (n=3). Therefore, only 66 patients were included, as shown in the consort-flow diagram of the present study (Figure-1). The included cohorts were hospitalized patients within 48 hours of focal neurological deficit, confirmed by computed tomography (CT) scan and magnetic resonance imaging (MRI). The selected 66 patients were initially subdivided into two groups following detailed medical history and physical examination. 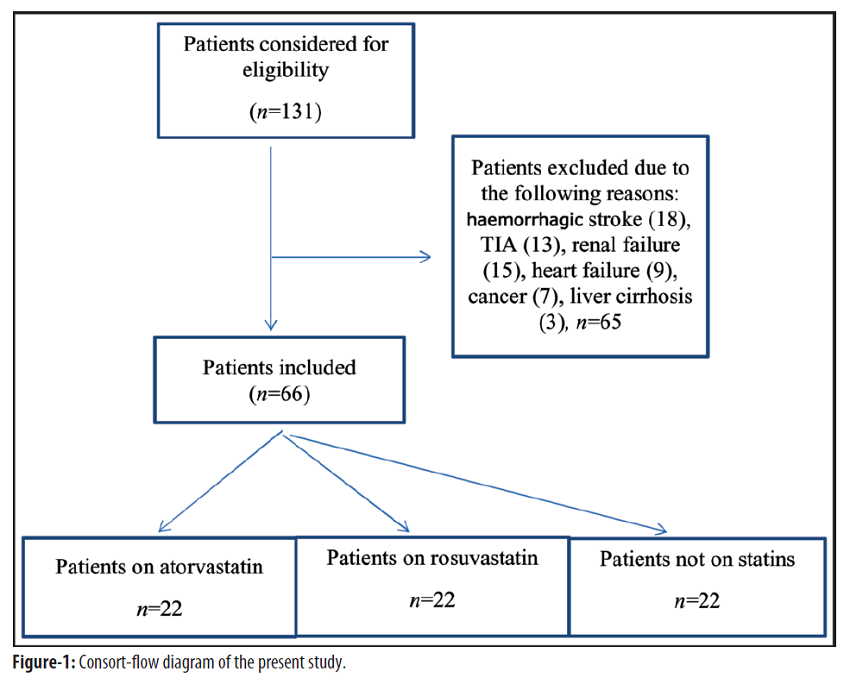 Group B: AIS patients not on statin therapy (n=22).

Patients age > 45 years, those with neurological symptoms of AIS within 48 hours, and with positive findings confirmed by MRI or CT.

Stroke risk score (SRS) was evaluated according to the underlying cardio-metabolic risk factors according to Kate et al method.14

In the present study, 66(75%) of the enrollments were patients with AIS compared to 22(25%) healthy controls with a mean age of 67.81±12.84 years and nearly equal male-female ratio (51.13%-48.86%). Also 30(45.45%) of patients with AIS were cigarette smokers. The duration of AIS was short (days), and most of the patients presented with motor deficits and paralysis 32(48.49%), coma 8(12.12%), sudden visual loss 7(10.60%), and other neurological dysfunction like aphasia, dysphasia, dysphagia, delirium, and convulsion. Moreover, patients with AIS were associated with different cardio-metabolic disorders including; hypertension 66(100%), dyslipidaemia 65(98.48%), ischaemic heart disease (IHD) 10(27.27%), previous CVAs 22(33.34%), AF 4(6.06%), and other neurological disorders such as dementia 2(3.03%) and Parkinson disease 2(3.03%). Concerning the associated and current pharmacotherapy, 44(66.67%) patients were on statins therapy compared with 22 (33.37%) patients not on statins therapy. According to the medical history of drug therapies, AIS patients also received but in an intermittent manner other medication such as anti-hypertensive and anti-platelet medications (Table-1). 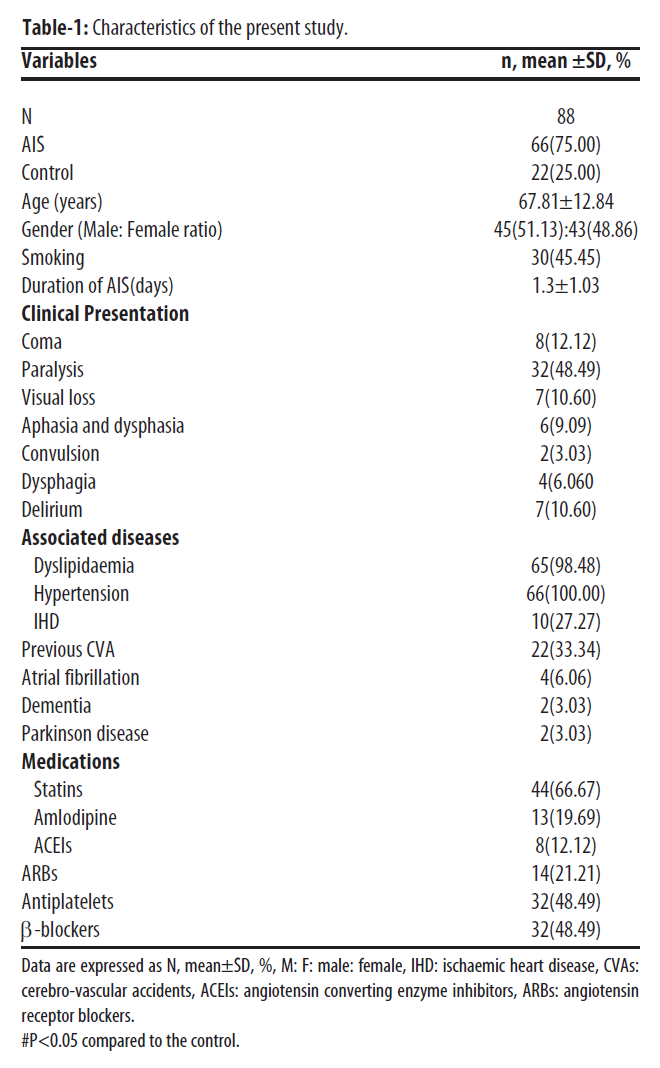 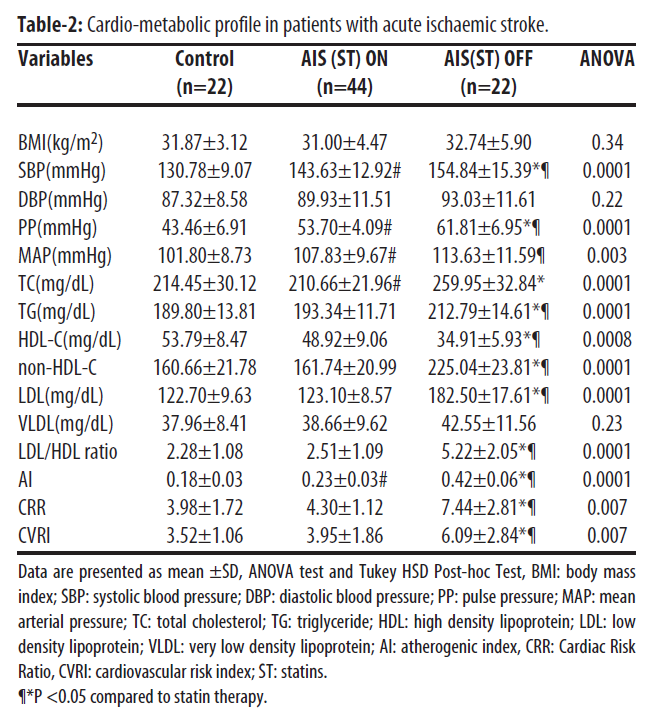 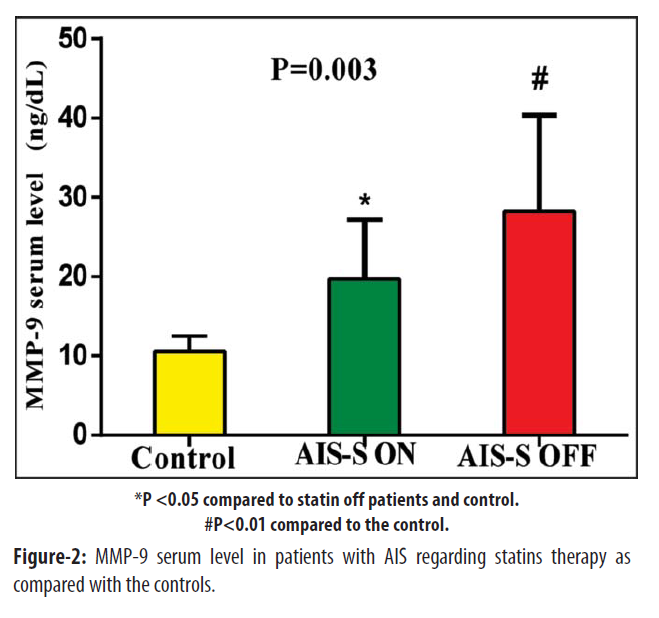 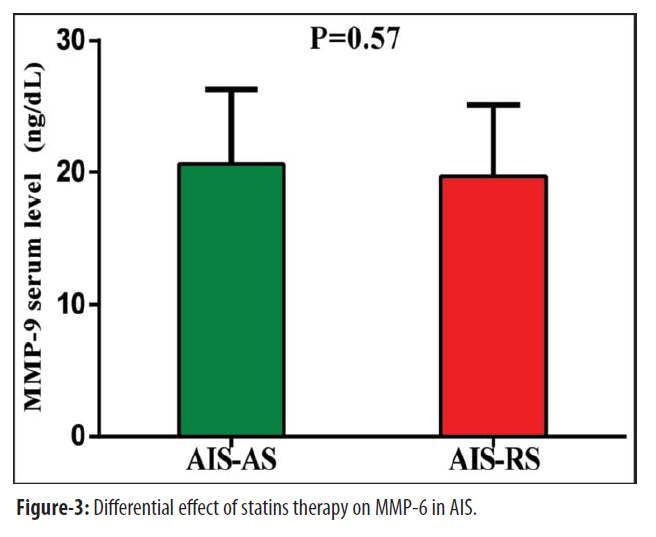 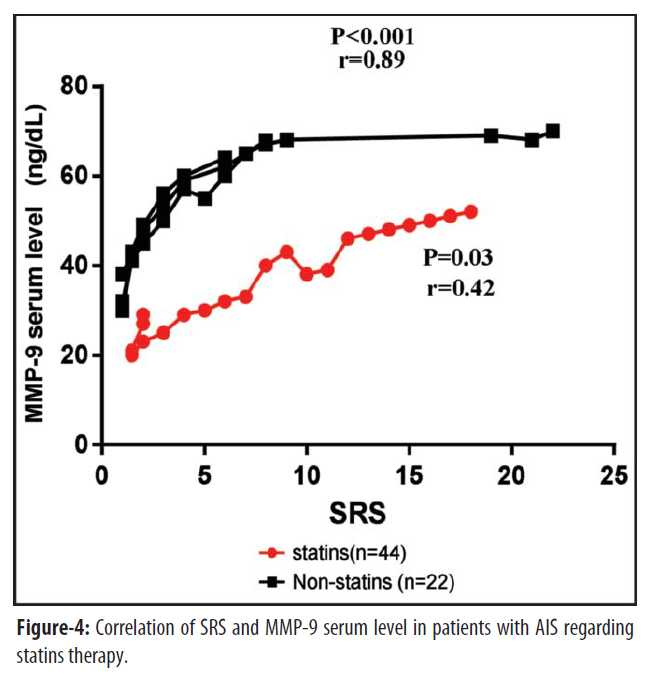 Different factors affect the incidence of AIS, such as, gender, age, smoking, dyslipidaemia, hypertension, ischaemic heart disease and previous AIS.15 In the present study, the mean age of AIS patients was 67.81±12.84 years). Yousufuddin and Young's16 study showed that the ratio of AIS in patient older than 64 years was high. The most vigorous non-modifiable risk factor for stroke is aging, with the doubling of stroke incidence each ten years beyond 55 years. Aging triggers alterations in the functional and structural cerebral blood flow due to endothelial dysfunction, neuro-inflammation, and micro-vascular injury.17

BMI did not considerably differ between AIS patients and controls in the current study. It has been reported that increased BMI is independently associated with lower AIS risk; however, obesity is considered a risk factor for stroke in general population. The mechanism of obesity as a protective factor against stroke is unclear; though, it could be explained by the aggressive and earlier preventive treatments taken by obese patients with cardio-vascular risk factors.19

Furthermore, serum lipid concentrations (TC, TG, LDL-c, non-HDL-c) were higher in AIS patients compared to controls, though, HDL-c serum levels were lower in AIS patients compared to controls. This result is consistent with the results of cohort studies in the field of AIS; that found an association between high serum cholesterol levels and risk of AIS. Moreover, an inverse relationship is found between HDL-c levels and risk of AIS. High LDL-c triggers endothelial dysfunction and atherosclerosis leading to cerebral hypo-perfusion, while high HDL-c provides a protection against the incidence of AIS.22 Therefore, the present study illustrated that the underlying cardio-metabolic risk factors, mainly hypertension and dyslipidaemia, are strongly linked with the incidence of AIS.

On the other hand, in the present study, MMP-9 levels were significantly higher in AIS patients compared to the controls since; higher MMP-9 serum level is an evident factor in AIS patients. Following AIS, MMP-9 is over-expressed by microglia, endothelial cells, astrocytes, and neurons. MMP-9 degrades extracellular matrix components and stimulates leukocytes to enter the CNS.23 MMP-9 is involved in both damage and repairing mechanisms, therefore MMP-9-targeted therapies might prevent an early damage and enhance late remodelling effect.24 MMP-9 triggers the disruption of BBB resulting in extravasation of blood cells and plasma, with subsequent vasogenic oedema to provoke haemorrhagic transformation. High MMP-9 serum concentration during AIS is related to many complications, including large infarct volume, poor prognosis, and haemorrhagic transformation.25 Therefore, MMP-9 can be used as a novel biomarker to predict post-ischaemic complications as haemorrhagic transformation.

Furthermore, measuring MMP-9 serum levels in patients with SAH, within 2 weeks from the start of haemorrhage, might predict the episode of delayed cerebral ischaemia. Some evidences suggest an association between MMP-9 gene polymorphism and risk of AIS since stroke patients with poor neurological consequences had higher MMP-9 serum concentrations compared to other patients.26 Indeed, many studies described an increase in MMP-9 serum level in AIS patients within the first 24 hours after the start of ischaemia.27 Keeping in mind the negative actions of MMP-9 in the course of AIS, along with some evidence showing its positive functions, it became obvious that using MMP-9 in the diagnosis of AIS is still unclear and needs further studies. Presently there are no studies indicating the effect of blocking of MMP-9 on stroke pathophysiology.

This study had some limitations including a small sample size, outcomes of AIS patients were not evaluated, as well the sequential brain radiological changes were not evaluated in relation to the MMP-9 serum levels. Though, this study is considered as an introductory step for large forthcoming studies to assess the precise association between AIS and MMP-9 serum levels regarding statins pharmacotherapy.

MMP-9 is regarded as a surrogate biomarker of AIS in patients with underlying poor cardio-metabolic profile. Both atorvastatin and rosuvastatin are effective in attenuation of AIS measured by lowering of MMP-9 serum levels.

Acknowledgment: To the all members in College of Medicine, Al-Mustansiyriah University.

Source of Support: None.