Objective: To determine and compare serum vitamin D and cortisol hormone levels in hypothyroidism patients and healthy controls, and to assess the correlation of vitamin D with related parameters.

Conclusions: Subjects with primary hypothyroidism had deficiency or insufficiency of vitamin D. High level of serum cortisol was observed in hypothyroid patients compared to the controls. Vitamin D and thyroid function parameters were not found to be correlated.

Vitamin D, a fat-soluble vitamin, acts as steroid hormone and its main action is to modulate the levels of calcium and phosphorus and to then regulate bone metabolism. It is produced by conversion of subcutaneous cholesterol in the skin upon exposure to ultraviolet B (UVB) radiation, and acts on the regulation of expression of a large number of genes.1 Vitamin D deficiency represents a global health problem. The guidelines of both the Institute of Medicine (IOM) and the Endocrine Society recommends that the serum level of <20ng/mL of 25-hydroxyvitamin D (25OHD) as the threshold for deficiency.2 In the Middle East, including Iraq, vitamin D deficiency is much more prevalent than in northern and western Europe despite there being abundant sunshine. Generally, the risk of severe deficiency is in women more than men due to the traditional clothing style in the region.2

Over the past two decades, several studies have demonstrated that vitamin D has a role in autoimmunity, metabolic syndrome and thyroid disease.3 The relation of thyroid disorders and vitamin deficiency is biphasic. In hypothyroidism, the causes of vitamin D insufficiency are both poor intestinal absorption and improper activation and transport of vitamin D,4 while low vitamin D concentrations and/or activity has been shown to be associated with higher incidence of Hashimoto's thyroiditis.5

Cortisol is a steroid hormone produced from cholesterol in the adrenal cortex, and plays a vital role in the regulation of different physiological process within the human body, including blood glucose regulation, inflammatory response modulations, stress and blood pressure (BP) control.6 It is well known that disturbed thyroid function is associated with metabolic stress like that observed in uncontrolled diabetes.7 Studies showed that elevated cortisol levels were associated with hypothyroidism, and the reason for this elevation could be attributed to both reducing plasma clearance of cortisol and disturbing feedback control of the cortisol on the hypothalamic-pituitary-adrenal axis.8

The relationship between vitamin D and serum cortisol level is unclear and is complicated. Low Vitamin D was shown to deteriorate cardiovascular stability in critically ill children with adrenal insufficiency where cortisol level was low.9 Another study showed no association between serum vitamin D and the adrenal function.10

The current study was planned to determine and compare serum vitamin D and cortisol hormone level in hypothyroidism patients and healthy controls, and to assess the correlation of vitamin D with other parameters.

The case-control study was conducted from March to October 2019 at the National Diabetic and Endocrine Centre, Mustansiriyah University, Baghdad, Iraq. After approval from the institutional ethics review committee, the sample size was calculated using Online OpenEpi Sample size calculator,11 with 80% power to detect an effect of 10% at a significance level of 0.05 with 95% confidence level. The sample comprised newly diagnosed overt hypothyroid patients, aged 28-62 years from among those visiting the diabetes, endocrinology, thyroid surgery and outpatient clinics. The patients were randomly selected and any patient taking thyroid medication and/or Vitamin D supplementation were excluded.

Healthy controls were included after complete physical assessment and laboratory tests. Those taking any kind of medication were excluded from the control group. After taking informed consent from the subjects, serum samples were collected in gel plain tubes and were permitted to clot for 2 hours at 20-25°C, and were then centrifuged for 15 minutes at 2000 rpm. Sera samples were stored immediately at -20°C until testing.

Patients were diagnosed as cases of hypothyroidism by endocrinologists and internal medicine specialists, and confirmed by conventional thyroid function tests, including thyroid-stimulating hormone (TSH), triiodothyronine (T3) and thyroxine (T4).

Data was analysed using SPSS 25. Data was presented as frequencies, percentages, mean, standard deviation, and range, as appropriate. Difference related to quantitative data was tested using students t-test between two independent means or through analysis of variance (ANOVA) for difference in group means. Difference related to qualitative data was tested using chi-square test. Statistical significance was considered with p<0.05. The correlation coefficient value (r) either positive having direct correlation, or negative having inverse correlation was categorised as <0.3 = no correlation, 0.3-0.49 = weak correlation, 0.5-0.7 = moderate strength, and >0.7 = strong correlation. In addition to correlation, the r2 value was also calculated. With r=0.58 and r2=0.34 meant 34% of the variation in the values of y could be accounted for by knowing the values of x, or vice versa. 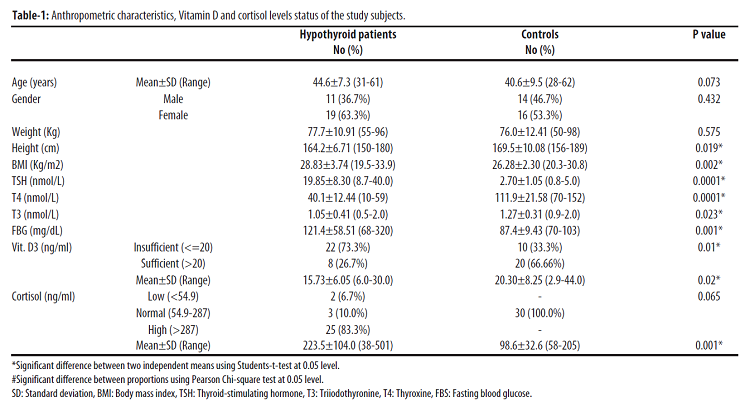 The mean vitamin D level was significantly lower than that of the controls (p<0.05) (Table-2; Figure). 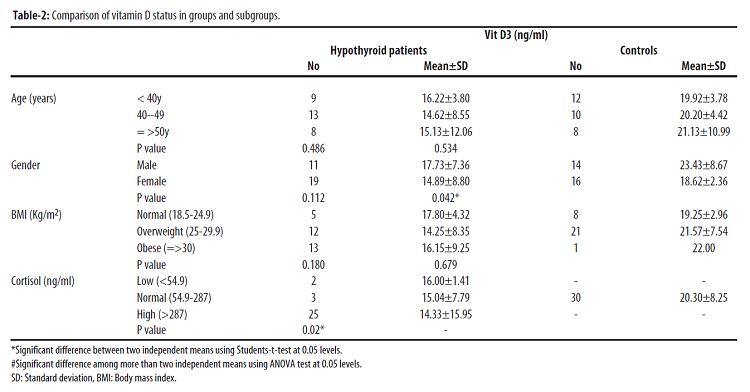 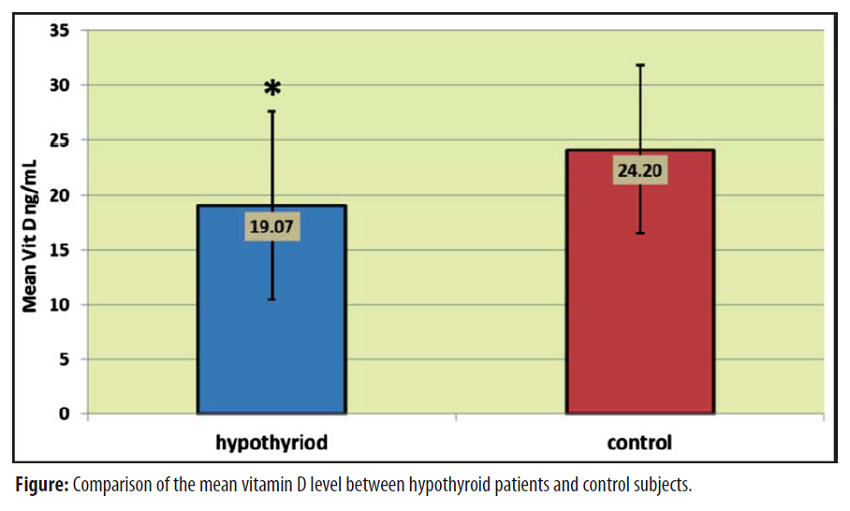 The mean cortisol level in the patients was significantly higher than that of the controls (p<0.001). There was no significant correlation between vitamin D and thyroid function parameters in either group (p>0.05). Correlation of serum vitamin D with other variables were also calculated (Table-3). 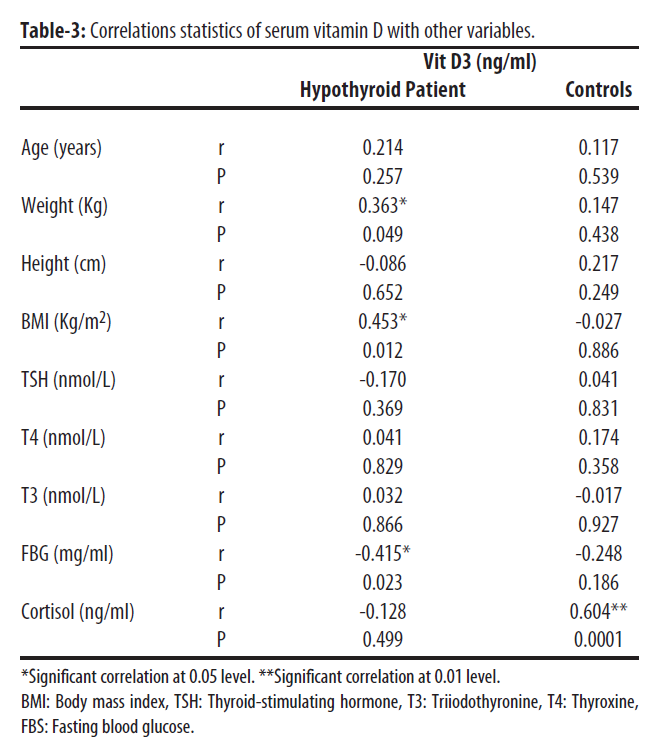 In Iraq, no mass data is available to assess the prevalence of vitamin D status of whole country. Several scattered studies in different provinces have reported the prevalence from a mean of 13.80ng/mL12 to 15.85ng/mL.13 In the current study, the overall prevalence was 18.02±7.53ng/mL. The higher value could be attributed to small sample size.

Hypothyroidism is one of commonest endocrine disorder globally Which is usually associated with other metabolic and endocrine abnormalities.14 The reported global prevalence of hypothyroidism is between 1% and 2%.15

Vitamin D plays a vital role in the modulation of the immune system,16,17 and both thyroid hormone and vitamin D act on the same nuclear binding steroid hormone receptors. Genetic defects in vitamin D receptor (VDR) were found to be associated with a variety of autoimmune disorders, including thyroid autoimmunity.18

No significant differences in the vitamin D levels were observed regarding age of the subjects and BMI in both the study groups. A previous study reported obesity as a risk factor of low vitamin D status,20 while another study found no correlation between the degree of obesity and hypovitaminosis D in healthy women of reproductive age.20  In the current study, significantly high (p=0.002) BMI value was noted in the hypothyroid group (28.83±3.74 kg/m2) compared to the controls (26.28±2.30 kg/m2). The analysis within each group regarding vitamin D status showed no differences in any group, which might be because of the small sample size and the presence of a reasonable number of male patients.

Cortisone hormone is a molecule produced and secreted by the middle zone of the adrenal cortex, and regarded as a biomarker for variety of diseases in the human body. Studies have reported that hypothyroidism causes elevated cortisol,8,21  which is a finding shared by the current study as well as the mean cortisol level in hypothyroid patients was 223.5±104.0ng/ml compared to the healthy controls 98.6±32.6ng/ml (p<0.001). In addition, vitamin D insufficiency in patients with high cortisol levels was significantly higher than that of the controls. These results are in accordance with earlier study findings.10  In addition, an interesting result was that the significant positive correlation of the level of vitamin D with cortisol observed in healthy controls (r=0.604, p=0.0001) diminished in hypothyroid patients group (r =-0.128, p=0.499).

There was vitamin D insufficiency in hypothyroid patients with high cortisol level was significantly higher than that of the healthy controls. This complexity of the correlation needs further clarification in future studies.

Acknowledgments: We are grateful to the teaching staff of the Department of Chemistry and Biochemistry, College of Medicine, Mustansiriyah University, for their support.