Do boys complete the family: Sex selection by choosing when your family is complete?

Objective: Preference for sons has sometimes resulted in adverse practices such as female infanticide or neglect in some cultures. We analyzed data from a population representative survey in an urban informal settlement in Rawalpindi, Pakistan to identify if there was a preference for boys by couples. The preferences of couples were measured by comparing the gender of the last child in the family with other relevant indicators.

Methods: Data from a cross-sectional survey from Dhok Hassu, Rawalpindi are presented. Dhok Hassu is an urban informal settlement where an urban lab was established to test health and development interventions. Data were gathered from 1556 Married Women of Reproductive Age (MWRA) through cluster randomization and analyzed through descriptive statistics and a binomial regression.

Results: The sex ratio for all children is 1.16 in favour of boys and increases 1.39 for the last child and increases to 2.45 among certain (Afghan) ethnic households. When a boy, as opposed to a girl, is the last child, the family size is 4.21 vs. 3.95 children (p: 0.044), Preference for sons is evident in Dhok Hassu where women desire and are on average likely to have another child if the youngest living child is a daughter. Family size was larger and contraceptive use was high in families where the last child was male with an AOR of 2.018, LL: 1.255, UL: 3.244.

Conclusion: A relatively less well described method of sex selection is described where couples continue to have children until they have a boy. In effect, having boys complete families. There is need to better understand motivations of families to have boys in the changing context of societies, particularly in the face of urbanization and increasing entry of women in work place.

In his seminal paper Amartya Sen focused the world attention on "missing women" by highlighting that in some cultures, the number of women are far fewer than would be expected.1 The phenomenon occurs predominantly in some regions such as China, South Asia or the Middle East;2-5 and may relate both to culture and economics. On the other hand, it is almost non-existent in the US or Europe, where a more "balanced family" is the norm.6,7

Subsequent work has confirmed his idea and explored causes of the discrepancy. These include traditional values favouring sons, beliefs that boys take care of parents in their old age, limited access to healthcare or education for women and girls, sex selective abortions, female feticide and possibly female infanticide. Conversely, paid employment of women reduces the gender gap.8-15

Natural sex ratio at birth (SRB) is 105 and is expected to equilibrate as girl children have lower mortality and older women outlive men. However, in some places, sex ratios of 120 or even 130 are observed and may actually be exacerbated due to the availability of modern technologies that allow parents to identify the sex of a foetus,15 use a sex selective medical procedure to terminate pregnancies or simply selectively choose to conceive to fulfil their desire for sons.8,16

While, a sex ratio of 106 in Pakistan is somewhat smaller than in other regional countries but the national average may also hide pockets of son preference.14,17 We analyzed data from a population representative survey in an urban informal settlement in Rawalpindi, Pakistan to explore how couples express their preferences for boys. Rather than ask couples their preferences and risk receiving biased answers, we measured revealed preferences of couples by comparing the gender of the last child in the family with other relevant indicators.

We conducted a cross-sectional quantitative survey of Married Women of Reproductive Age (MWRA) in November 2017 in Dhok Hassu, a low-income urban settlement in Rawalpindi, Pakistan. The area population is 228,000 spanning 16 neighbourhoods (mohallas). Using Google Earth® software, a total 1040 clusters were identified corresponding to approximately 50 meters length of a street.

Sample size was estimated using multi-stage cluster sampling at 1354, assuming a design effect of 3 and a 95% confidence interval. 300 clusters were randomly selected for the study. Allowing for 5 interviews per cluster and a minimum of 50 interviews for each mohalla - to ensure mohalla level representation — a total of 1,556 MWRA were interviewed. Within each cluster, the first house was randomly selected and then every third household was selected until 5 interviews had been completed. One interview was conducted per household.

After monitoring to ensure data quality, the data were cleaned, compiled and analyzed in IBM SPSS Statistics 25. Population weights were estimated for each mohalla and applied before analysis to ensure accurate representation of the study population. We cross tabulated demographic features, current contraceptive use and fertility choices of the family against whether the last child was a boy or a girl, and checked whether differences were statistically significant through Pearson's Chi-Square. A binary logistic regression model was also used to estimate the effect of gender of the youngest child, who makes the decision about having another child, ethnicity, mother's education in years, total number of living children, wealth quintile, employment, whether the mother has a CNIC and duration of urban residence on the rate of contraceptive usage within the community. 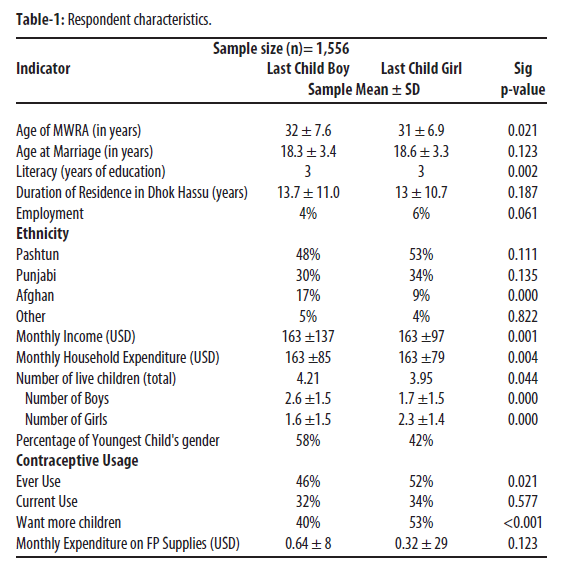 On average, the respondents reported their ideal number of children was a mean of 4.4; 2.4 boys and 2 girls. This translates into their current male to female sex ratio among their living children of 1.16. However, this difference was even more pronounced for their youngest child at 1.39 and is the most marked among Afghan women, 147 (71 %) of whom reported that their youngest child was a boy (sex ratio: 2.45, p-value <0.001). Gender of the youngest child correlates with lack of literacy — sex ratio of 1.69, compared to 1.10 for women with at least some education (p-value <0.001). However, women among the two lowest wealth quintiles showed relatively lower preference for sons. They have a sex ratio for the youngest child of 1.22 as compared to 1.50 in the other 3 quintiles (p-value < 0.05). Families where the youngest child is male, tend to have more total number of children (Table-1).

These decisions also reflect in family planning and specific method choice. Women whose last child is a boy are twice as likely to use family planning (AOR: 2.018, LL: 1.255, UL: 3.244 in the binary logistics model) and prefer injections, Intrauterine Devices (IUD) or sterilization - methods that are more certain to limit fertility (Figure-1).

We describe evidence for an unusual form of sex selection that families practice to have sons, i.e., they continue to conceive if the last child born was a girl. Had there been no selection, the last child would be equally likely to be a girl or a boy. However, our data show the last child is a boy in 58% of families, suggesting that at least some families continue to conceive if the last child was a girl and stop when they have had a boy. This tendency runs across all the four major ethnicities in our survey and is consistent with higher family planning use, and the use of more consistent methods, among families where the last child was a boy. Interestingly, this increased Contraceptive Prevalence Rate (CPR) was not seen among the poorest families, perhaps because they were unable to afford or access FP even when they wanted to.

Unlike the historically manifested means of son preference such as female infanticide and neglect of healthcare or nutrition needs, our study reflects a gentler, yet still profound way of sex selection in the society and is consistent with previous observations in the region.18-20 In a country where family planning is seldom used, the change of family planning pattern in contrast to last child's gender is intriguing. Even though we mention better off households, all respondents in our study were extremely poor (median household spending of USD 163 for a household of 6). It would be useful to examine these trends among better off households and communities.

Our findings suggest a more benign but pervasive method of sex selection that is grounded in fertility choices of couples that profoundly affects sex ratios of children within families. More research is needed to replicate these findings in other contexts such as rural areas, with different ethnicities and among communities with higher education and income levels.

Contraceptive access, choices, and discontinuation among the urban users in Karachi, Pakistan: Findings from a comparative analysis of Pakistan demographic and health survey 2012-12 and 2017-18