Contraceptive access, choices, and discontinuation among the urban users in Karachi, Pakistan: Findings from a comparative analysis of Pakistan demographic and health survey 2012-12 and 2017-18

Objective: To explore and assess the contraceptive access, choices, and discontinuation among the urban users in Karachi using the last two Demographic and Health Surveys in Pakistan.

Methods: A comparative analysis of the six districts of Karachi (Urban only) using Pakistan Demographic and Health Survey 2012-13 (sample size 2324) and 2017-18 (sample size 2896) of the currently married women of reproductive age 15-49 years was designed and conducted. For the current study, we used descriptive statistics on contraceptive use, method-mix, unmet need for family planning, method-specific discontinuation, sources of modern contraceptive use by channel (public and private), and exposure to family planning messaging.

Results: The analysis of the PDHS indicated that the mCPR for Karachi Urban remained stagnant at 35%. However, CPR (all methods) improved from 48% to 52% mainly because of an increase in the traditional contraceptive methods. On the other hand, there was an increase in unmet need between the two DHS surveys from 13% to 16%. The possible explanation is inadequate resource allocations, affordability of the services, poor quality of care, and fear of side effects, among other factors. The supply-side situation indicates that the private sector holds a significant share of family planning service delivery. However, the decline of 15% in the current share of services from the private sector in Karachi's urban areas since 2012-13 PDHS data. The desire for pregnancy, method failure, and side effects remained three significant reasons for the method discontinuation.

Conclusion: The present study reports a high unmet need for family planning and a stagnant mCPR for urban Karachi between the two demographic surveys. In addition, the data reveals private sector taking over the public sector for the delivery of modern contraceptive methods while the major reasons for method-specific discontinuation illustrates a similar trend at national and urban Karachi level.

More than half (55%) of the world's population currently lives in cities, and this massive urbanization is accelerating to almost 70 percent by 2050, especially in Africa and Asia.1 Cities benefit from economic growth and struggle to accommodate rising demands for services; hence, cities are home to growing, underserved poor communities called "slums." According to UN-Habitat, nearly a billion people live in slums, an increase from 689 million in 1990.2 During the past two centuries, the proportion of the world's population living in cities and towns has grown from about 5% to more than 50%.3 This considerable growth in slums has provoked increasing international interest. The United Nations Sustainable Development Goals (SDGs) specify a target to address the "plight of slums".4

Since 1951, the percentage of the population living in urban areas of Pakistan has more than doubled from 17.4% to 36.4% in 2017.5 Karachi is the largest and most populous metropolitan city in Pakistan, with a population of 16.05 million5 growing at an estimated rate of around 5% per year due to rural to urban migration. In addition, 45-50 thousand working migrants, who come to Karachi every month from around Pakistan, increase the size and the number of urban slums known as "Katchi Abadis" in Urdu. This leads to increasing the density along with the emergence of new slums areas.5 Soon, Karachi will become the seventh most populous city globally, with an estimated population of 21.2 million.5,6 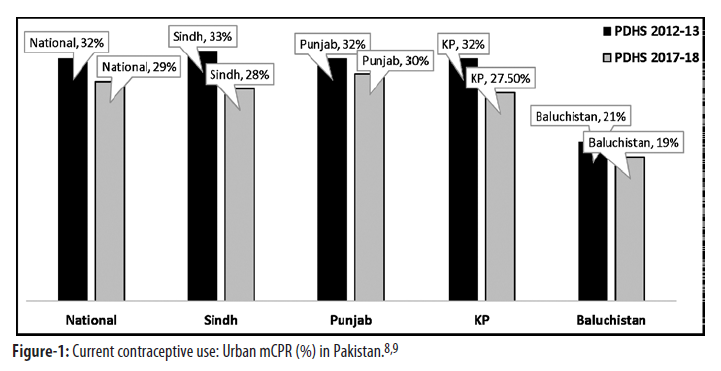 Like in any other urban city of Pakistan, modern family planning methods and services are widely available in Karachi, either at public sector facilities (free of charge) or through a private hospital, clinic, or pharmacy; however, the utility of these methods remains low.10,11 The present study sought to explore and assess the contraceptive access, choices, and discontinuation among the urban users in Karachi throughout two consecutive demographic health surveys.

This was a secondary analysis of data from two rounds of Pakistan Demographic and Health Survey (PDHS) using 2012-13 and 2017-18 (PDHS)8,9 datasets, a nationally representative survey — nationally representative cross-sectional surveys conducted by the Pakistan Bureau of Statistics, Government of Pakistan. This paper used previously published data available as free resource from the DHS programme website and did not require ethical approval.

The study population comprised of a total of 12,937 and 11,831 (weighted) currently Married Women of Reproductive Age (MWRA) between 15-49 years, respectively from two surveys who are now using a contraceptive method (unweighted respondents were 13,010 for 2012-13 survey and 11,902 for 2017-18 survey). In addition, further data were extracted based on "type of residence for Karachi" from the two respective databases with the segregation of Karachi URBAN and Karachi RURAL (Table-1). 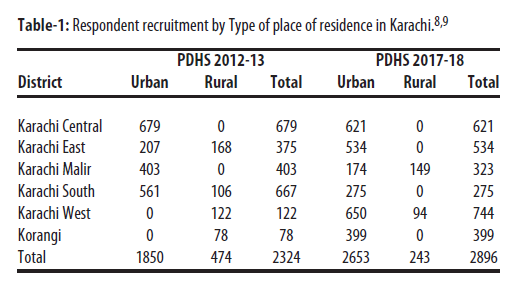 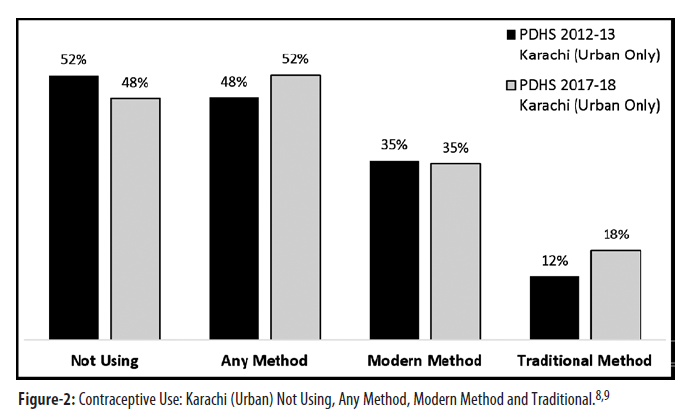 Descriptive analysis of the PDHS data 2012-2013 and 2017-20188,9 for Karachi Urban indicates a significant decline in modern contraceptive methods, i.e., injection from 6% to 2%, pills from 3% to 2%, and IUD from 2% to 1%. However, these have been offset by increases in traditional methods and stagnant use of condoms (Figure-3). 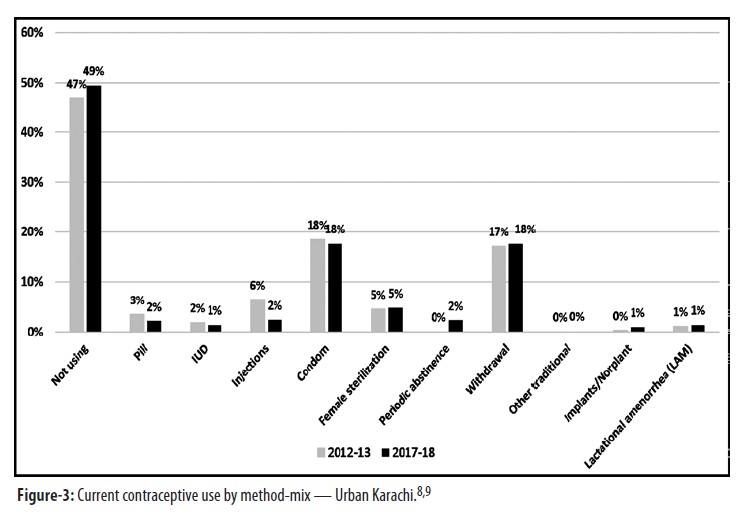 The unmet need: Unmet need for family planning is around 22% for urban Karachi (Figure-4). 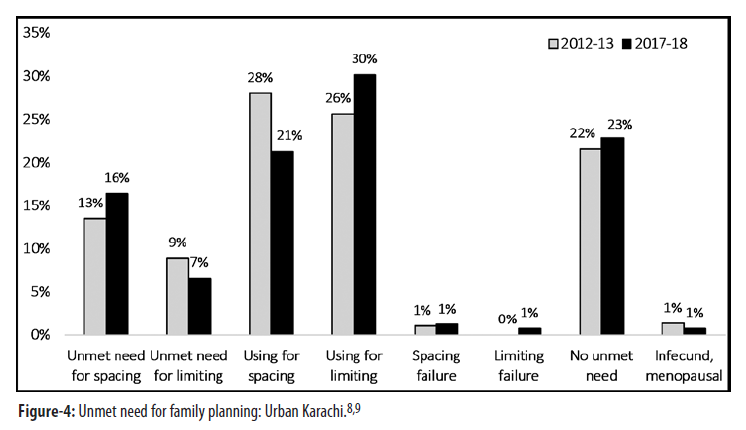 Source of contraceptive methods: The private sector's total share has increased over the period (Figure-5). 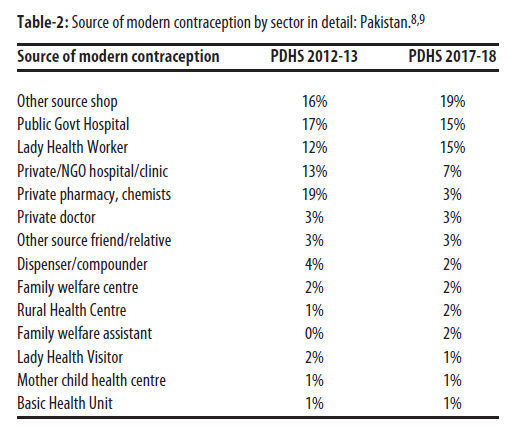 As compared to the national data, urban Karachi data also presents a similar picture where the primary source of modern contraception is the private sector (71% is shared between pharmacy/chemists and private shops in 2012-13. While for 2017-18 it is reported about 39% in 2017-18 PDHS report).8,9 Similarly, the current share of private hospitals/clinics/NGOs in urban Karachi areas also resembles the national phenomena and stands around 4% — a decline of more than 12% from 2012-13 PDHS data. The public sector consistently fulfills less than 20% of modern contraceptive services in urban areas of Karachi, according to the 2012-13 and 2017-18 surveys (Table-3).8,9 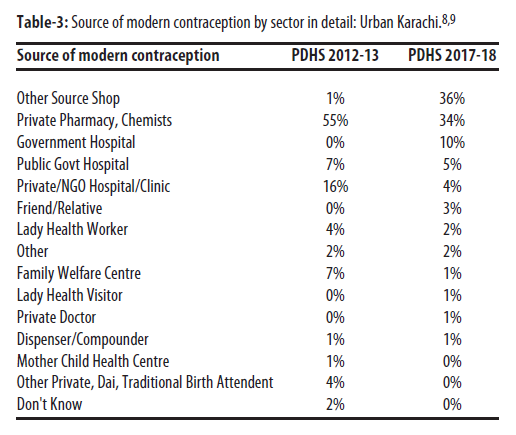 Contraceptive method discontinuation: As far as the reason for discontinuing a modern method of family planning is concerned, the 2017-18 PDHS data8 reported the desire for pregnancy (44%) followed by health concerns/side effects (19%) and method failure (16%) as the top three causes of in Pakistan (Figure-6). 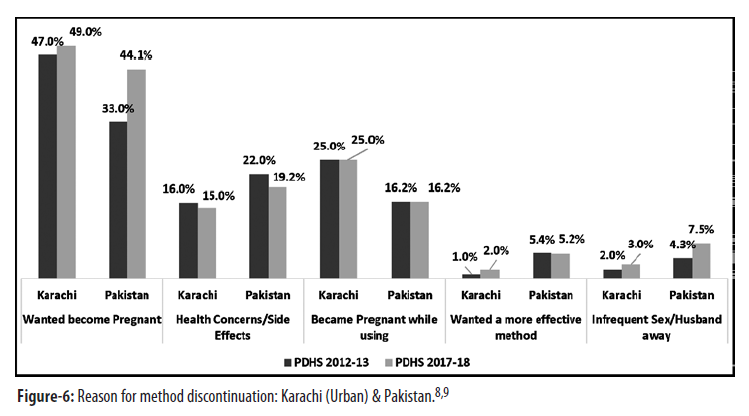 While urban Karachi also presents an almost similar picture — the desire for pregnancy (49%), method failure (25), and side effects (15%), refer to Figure-6.

Mobile phones use for family planning messages exposure is almost negligible throughout Pakistan, including urban Karachi.

The current study aims to explore and assess contraceptive use, unmet need, sources of contraceptive methods, method-specific discontinuation, and family planning messaging in Karachi urban areas from two successive rounds of PDHS 2012-13 and 2017-18 in Pakistan. The study also explores reasons for low and  stagnant mCPR (at 35%) in the inter-survey period and to identify strategies that may increase mCPR in urban Karachi.  According to our analysis, the increased use of traditional methods and sustained use of condoms kept the mCPR stagnant in urban Karachi also conforming the national trends.12

In contrast, other short methods like pills and injections decreased, as did IUCDs.  Moreover,  the use of modern contraceptives for urban areas of Karachi is low when compared to other populated cities such as Mumbai (74%), India,13 Tehran, Iran (81%)14 and Beijing, China (80%).15 The study also indicates that the unmet need for family planning for urban Karachi is higher (22%) than the national figure (Pakistan reported a decline from 20% in 2012-13 to the 17% in 2017-18 for unmet need family planning).8,9 The unmet need for spacing is also more than the need for limiting in urban Karachi areas.

Some highly probable reasons for low mCPR in urban Karachi include insufficient geographical and underserved population coverage, indifferent programming, inconsistent access and lack of targeting slums in the main policies.6 All these challenges could be addressed by prioritizing trained human resources and allocating financial resources — to family planning — as the increase in population growth may adversely impact the overall economy of the Sindh province, and at the same time, well-being of the residents because of disparities in the affordability and purchasing power.11 A study conducted in Karachi mentioned that most people cannot access family planinig methods due to economic constraints and linked with it the fact that a significant market share of the family planning service are provided by the comparatively costly private sector. These financial contraints in access contributes to persistent unmet need for family planning services.11 Besides financial access, it is also interesting to note that the reasons for modern contraceptive discontinuation are in line with national trends, i.e., most common factors are desire for pregnancy, method failure, and side effects.

It is worth noting that the scenario in service sector in Pakistan is quite different from the South Asian regional countries where almost 70% of the modern FP services are delivered by the public sector.16 In Pakistan, the private sector has, over the years, overtaken the public sector for modern FP service delivery. The PDHS 2017-18 data8 indicates, the private sector share increased to 55.3% from 52% in the 2012-13 period.9 Likewise, urban Karachi also depicts a similar trend. The strong and increasing reliance on the private sector in Karachi urban for obtaining modern contraceptives demands a strong oversight, pricing and quality control measures to ensure access to underserved and those in need.15 The study has identified the need for public-private partnership to synergize and leverage the resources to train qualified female and male healthcare providers and incorporate quality assurance measurements to improve access and quality of family planning service delivery.17 One of the successful and proven models is the social marketing of contraceptive products and services led by the private sector in Pakistan that has shown to increase reach and contributed to increasing contraceptive use.13,14,18-23 The results of these social franchising models become more significant when they are coupled with health financing support such as free or subsidized vouchers for the poorest.24,25

For efficient functioning, the provincial government in Sindh, has merged the health and population ministries under a central authority in 2013-14 and developed Costed Implementation Plan (CIP) in Sindh budgeting additional activities to increase access and uptake of family planning.11

The authors would like to acknowledge a major limitation of this analysis that the overall sample is representative of Sindh, Pakistan but not of entirely of Karachi. Also to note that sample for analysis, though large, came from some locations in Karachi, so data interpretation must be done with caution.

According to the the last two Pakistan Demographic and Health Survey (PDHS), the national and province Sindh's urban modern contraceptive prevalence rate (mCPR) had fallen three and five percentage points, respectively. With the anticipated increase in the share of the country's urban population, especially in Karachi which illustrates an stagnant mCPR (due to sharp decline in short and long term method use but this reduction is offset by increases in traditional methods and stagnant use of condoms), higher unmet need and increasing dominance of private sector for family planning services, there is a strong need to initiate and strengthen public-private partnerships, ensure policy implementation, foster accountability, and adapt the programme to  emerging needs in family planning service delivery in the targeted areas. Effective strategies to address the imbalance in modern family planning services access and uptake in Karachi, the largest metropolitan city of Pakistan, will be vital to achieving the FP2030 goals.