This case series of 4 patients was studied at Queen Mary Hospital, Hong Kong from 2007 to 2011 to evaluate the clinical and radiological outcome of scaphoid fracture non-union treated with Open reduction and internal fixation ORIF supplemented with Bone Graft (BG) from iliac crest and Platelet Rich Plasma PRP. The purpose was to achieve union with pain free adequate range of movement. Patients presenting with scaphoid fracture non-union were included in our study.

Total 4 patients with an average age of 35±7.7 years (range 31 to 47 years) and mean follow-up of 21.75±14.97 months, (range 05 months to 3.5 years) were included. All patients achieved union with pain free Range of motion of wrist as well as thumb. We recommend open reduction and internal fixation with bone graft along with platelets rich plasma for non-union of scaphoid.

Scaphoid non-union: Fracture of Scaphoid is commonest among carpal bones with incidence of 60-70%. Majority of the fractures occur at the waist. Herbert and Fisher Classified non-union of scaphoid on the basis of anatomy, delayed union and non-union (Table-1). 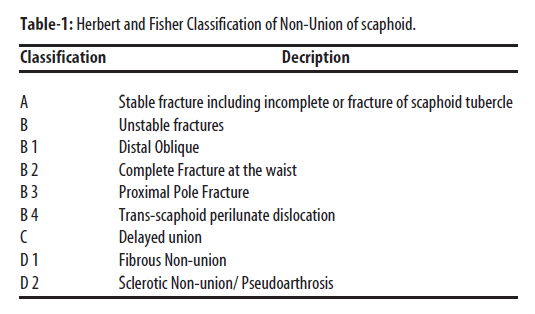 Scaphoid is notorious for non-healing and is difficult to treat with a significant risk of non-union. By definition, non-union of scaphoid is defined as absence of bone healing at-least 3 months after initial injury.1

Scaphoid non-union can lead to sequence of arthritic changes with involvement of scaphoradial, scaphocapitatae and capitulolunate joints. Non-union can be classified by using Russe Classification as Horizontal oblique, transverse and vertically oblique.2 While Herbert and Fisher classified it according to stability3 (Table-1).

Non-union of scaphoid requires surgical intervention as the aim is to achieve bone healing. It includes stable internal fixation, Bone Graft, electrical or electromagnetic stimulation either one or in combination. However Rate of persistent non-union can be as high up to 35%. Schuind et al. in their multicentre retrospective review on 138 patients with scaphoid non-union, performed ORIF with k-wires or screw along with non-vascularised bone graft (BG). He found persistent non-union in 25%.4 Treating the scaphoid non-union is always a challenge in orthopaedics and it is notorious for non-healing. Considering this high frequency of scaphoid non-union, inspired us to use another modality to enhance fracture healing hence we added Platelet Rich Plasma (PRP) along with ORIF and BG.

The case series of 4 patients was conducted at Queen Mary Hospital, Hong Kong from 2007 till 2011. Written informed consent was obtained from the patients presenting with scaphoid fracture non-union. They were included in our study and treated with standard treatment of ORIF with BG and in addition with PRP to enhance fracture healing. Demographic Data included was Age, Sex, Gender, Occupation, Dominant Hand, Site of Injury (Table-2).

All 4 patients underwent open reduction and internal fixation with iliac crest bone graft and PRP. Volar approach was used for 3 patients with waist fracture and dorsal approach for one patient with proximal pole fracture. Internal fixation was done with k-wires.

PRP was prepared by using centrifuging system to separate it from blood technique known as gravitational platelets separation (GPS). Patient's autologous blood was centrifuged and 3 layers were obtained, bottom layer of red cells, middle layer of platelets and white blood cells (WBC) and top layer of plasma rich in platelets.

Patient-2: 36 years old Right hand dominant male, salesman of herbal medicine by profession, acquired injury while playing football on 29 Oct 2007. He presented to us 3 months later with fracture non-union of proximal pole of Right scaphoid. Per-operatively following findings were noted: Proximal pole fracture which was sclerotic and had avascular margins with no solid remaining bone except cartilage like an egg shell. 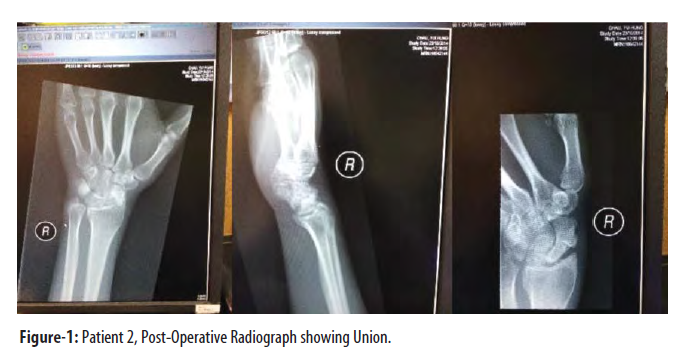 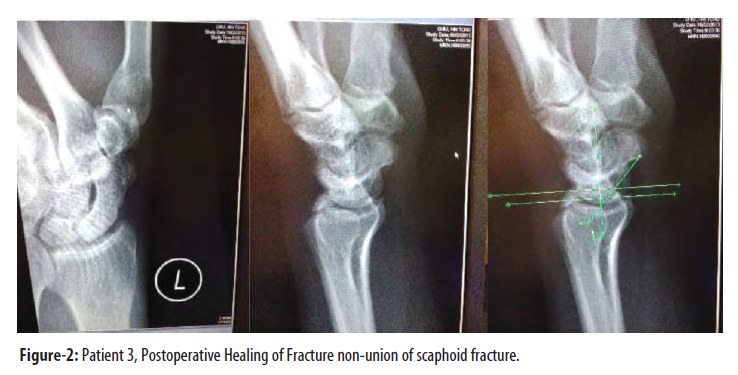 But it resulted in non-union despite Bone graft. The second operation was done, k wires were retained as they were maintaining the reduction, fibrous tissue was removed by curette and power burr and bone graft with PRP was undertaken on 31 Dec 2007. Last follow-up was on 21 Oct 2008 i.e. 10 months after the second operation.

There were 4 patients in our study with an average age of 35±7.77 years (range 31 to 47 years). The mean follow-up was 21.75±14.97 months (range 05 months to 3.5 years). All the patients achieved union with pain free Range of motion of wrist as well as good total active range of movement (TRAM) of thumb. All patients had good apposition of thumb with little finger and got back to normal activity of daily living (ADL).

Scaphoid non-union is always a challenge with high incidence of persistent non-union despite ORIF with BG. We consider PRP to enhance fracture healing along with ORIF and BG.

PRP is a fraction of the patients' autologous whole blood with supra physiological concentration of platelets. It has been used in various fields of Orthopaedics to regenerate tissue including soft tissue and bone.5 As it is autologous hence there is no chance of disease transmission and immunological reactions. It contains 5 times higher count of platelets than autologous blood. Its a granules contain various proteins including platelets derived growth factors PDGF, transforming growth factors TGF-B, platelets factor 4, interleukin 1, platelets derived angiogenesis factor PDAF and many others which enhance tissue healing. PRP also contains proteins which help in cell adhesion including fibrin, fibronectin, vitronectin and thrombospondin.6 It also helps in proliferation of bone cells.7

Clinical application of PRP was first reported in 1994 for mandibular reconstruction.8 It has been used in the treatment of tissue healing in lateral epicondylitis, open repair of tendo-achilles, and repair of rotator cuff.

Bielecki et al. treated 32 patients with delayed union and non-union with percutaneous PRP injections and achieved 100 % success rate with union in all patients.10

Open reduction and internal fixation with bone graft along with platelets rich plasma is the recommended technique for non-union of scaphoid.

The study size was small with only 4 patients included. Large multicenter studies should be conducted and further Randomized Control Trial is required to compare different treatment options to determine the union rate as well as complications related to each procedure.

Clinical and functional outcomes following platelet rich plasma in the management of knee osteoarthritis: A case series in a tertiary care hospital