The aim of this study was to evaluate the radiological outcome of acute subtrochanteric fractures fixed with Recon intramedullary nail.

Charts of 48 patients with subtrochanteric fractures treated with Recon IM Nailing from January 2014 to December 2015 were retrospectively reviewed. Thirty (62%) patients were male and 18 (38%) were female. The mean age was 52±7 years. The most common mechanism of injury was road traffic accident (RTA) which was in 27 (56%) patients followed by a history of fall in 18 (38%) patients. Mean Radiological Healing time was 14±2 weeks. The mean duration of surgery was 2.27±1 hours while Mean Hospital Stay was 5±2 days. Four patients had delayed fracture healing. This study suggests that intramedullary nailing in Recon Mode is a reliable and effective device especially for subtrochanteric fractures, leading to a high rate of bone union and minimal complications.

The subtrochanteric zone of the femur is the area that extends from the lesser trochanter to a point 5 cm distally. Subtrochanteric fractures are relatively less common compared to other fractures in this region, with a prevalence of about 7-15% of all hip fractures.1 These fractures exhibit a bimodal incidence, occurring in two age groups: the young population and the elderly. In the young, the main cause of fracture is high energy trauma and road traffic accidents whereas, in the elderly osteopenic population, low energy ground-level falls are commonly associated with subtrochanteric fractures.

Histologically, the subtrochanteric area is primarily composed of hard cortical bone with poor vascularity and is under appreciable tensile stress biomechanically, owing to the multiple shearing forces applied by the muscles in that region.2

When considering the management of subtrochanteric fractures, surgeons are faced with multiple challenges because of the inherent complexity and instability of the region and the focus of the muscles in the region that act on the proximal and distal fragments. The short proximal fragments which are deformed by the hip flexors and adductors pose an additional challenge and make precise reduction and fixation difficult. Owing to these challenges, the outcome of these fractures has not been very good with a high rate of non-union, malunion and fixation failure.3,4

Over time, multiple modalities for the treatment of subtrochanteric fractures have been devised, each with its pros and cons. Non-operative management (traction) has by far produced the worst results with complications including but not limited to shortening of the femur and varus malformation.5 Operative management options include the following: plating, AO angled blade, intramedullary (IM) nail, Enders nail, Zickel nail, hip screw, and most recently the reconstruction nail.5 Each of these operative interventions has been reported to have its own set of complications including, varus malformation, shortening, lengthening, mechanical failure, protrusion of various nails into the joint, nonunion and malunion.6-8

The ideal device for the sustainable treatment of subtrochanteric fractures would be one that can effectively stabilize and reduce the fracture and prevent major complications from arising e.g. shaft medialization, as well as rotation and varus angulation of the proximal fragment. Various biomechanical studies done in this particular area have suggested that among the various operative options available for the treatment of such fractures, intramedullary devices have proven to be the most feasible option in providing a stable construct for the subtrochanteric fractures.9-13

Intramedullary nailing is preferred as the implant of choice in this regard since it is as close to the ideal implant as possible, with a short lever arm on the proximal fixation, it has load shearing characteristics along with excellent rotational and axial control which allows for early weight-bearing. It also allows for the preservation of the local histology of the region since it does not damage the periosteum of the bone and the surrounding soft tissue extensively which makes it superior from the surgical point of view.

The Intramedullary nail in Recon Mode is a unique intramedullary device with proximal fixation by two screws placed through the nail into the femoral head. The primary indication for this specialized intramedullary device is high subtrochanteric fractures. It produces favourable results in the long run and also prevents insufficiency fractures that are a common problem in these fractures.

The research was conducted at Aga Khan University Hospital, Karachi in January-March 2017. This retrospective case series comprised of 48 patients with acute subtrochanteric fractures treated with Recon Intramedullary Nail at the Aga Khan University Hospital from January 2014 to December 2015. The medical records of all 48 patients were reviewed for age, gender, mechanism of injury, type of fracture, pre-existing comorbidities, mean duration of surgery, complications, duration of hospital stay and healing time after surgery. The inclusion criteria for the study were all acute subtrochanteric fractures managed with Intramedullary Recon Mode Nail, regardless of race, age, gender, etc. All cases presenting with fractures other than subtrochanteric fractures, pathological subtrochanteric fractures, and cases of nonunion during the same period were excluded from the study. Postoperative plain radiographs were reviewed for healing (Figure). 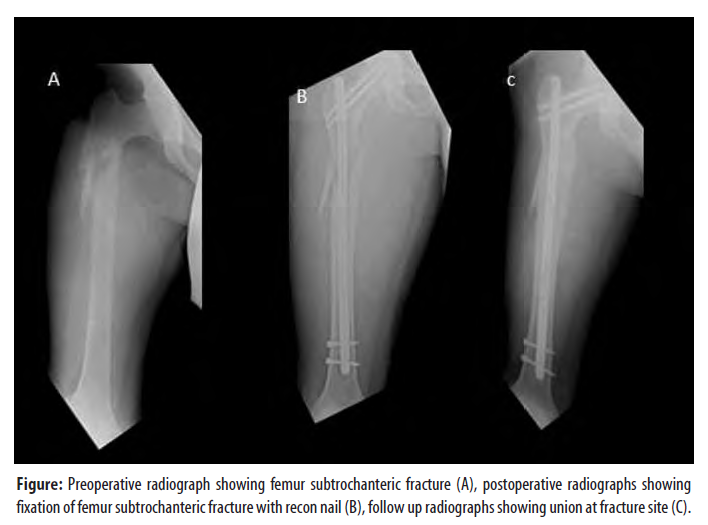 The mean age of the patients was 52±7 years. There were 30 (62%) males while 18 (38%) were females. The most common mechanism of injury was road traffic accident, seen in 27(56%) participants followed by fall injuries 18(38%) with ground-level falls seen in the elderly and fall from a height seen in the younger patients. A small fraction of these injuries was due to firearms 3(6%). Among the 48 participants of this series, pre-existing co-morbidities were seen in 30 (62%) whereas 18(38%) participants had no prior co-morbidities. The most common co-morbid being Hypertension followed by Type 2 Diabetes, Ischaemic Heart Disease, and Chronic Obstructive Pulmonary Disease, respectively. The baseline ambulation status of the 48 patients revealed that 45(94%) were independent community ambulant and 3(6%) were on community ambulant support.

The mean duration of presentation to surgery was 13±4 hours. The mean operative time was 2.27±1 hours. The mean hospital stay was 5±2 days and the mean radiological healing time was 14±2 weeks. All 48 cases were followed up by clinical and radiological examination and none were lost to follow-up.

The only complication arising from this method of reduction and fixation was delayed union seen in 4(12.75%) cases out of 48. Delayed union, is defined as a union not having occurred even after 12 weeks post index surgery. These patients were followed up until twelve weeks and fracture lines were still visualized on their plain radiographs. Corrective dynamization of the intramedullary nail had to be done in these patients. The delayed union cases were victims of high energy trauma and had other associated injuries. We did not encounter implant failure and malunion.

Subtrochanteric fractures of the femur pose a special challenge in orthopaedic traumatology with regards to treatment options and prognosis. This is because of the high rate of complications associated with their management due to the inherent complexity and instability of patterns.3,4

The deforming forces in this area are the pull of muscles: the hip abductors; short external rotators; and iliopsoas, which pull the proximal segment into a flexed, abducted and externally rotated position. This results in an overall varus and apex anterior deformity at the fracture site. This deformity makes closed reduction difficult. This causes a high concentration of stresses and deforming forces in this portion of the bone. The subtrochanteric area is made of mainly cortical bone with diminished blood flow to this region when compared to the metaphyseal bone of the intertrochanteric region. These factors contribute to the complex nature of managing these subtrochanteric fractures as has been made evident throughout the orthopaedic literature.

As far as treatment options available are concerned, the conservative non-operative method of treating these fractures has taken a backseat due to the highest rate of complications and poor outcomes.5 As far as operative management of these fractures is concerned, there has been ongoing discourse over which method (intramedullary or extramedullary fixation) is more effective in terms of immediate healing time and later complications.

Recon nail is an intramedullary device that is a unique treatment option for these complicated fractures that allows placement of two interlocking screws into the femur head and distally in femur metaphysis. These features make it possible to treat the subtrochanteric fractures that have medial comminution and fractures with intertrochanteric extension to be treated with closed intramedullary technique. Intramedullary nail in Recon Mode that has shown promising results in these fractures, provide stable fixation, allowing for earlier weight-bearing and lowers the risk of insufficiency fractures, which improves the quality of life of the patient. However, the use of this device in fractures associated with high energy trauma has not shown promising results.

This retrospective study was compared to the work done previously at different institutes internationally in the same field (Table).

Broos et al did a study in 2002 with a larger sample size than ours (80 patients) and calculated an overall complication rate with the use of intramedullary nailing in recon mode to be 21%. The cases were categorized into non-union (21%) and implant failure (21%) which required intervention in 9% of the cases.14 Datir et al conducted a study in 2004 with a sample size of 55 patients who presented with subtrochanteric fractures and were treated with intramedullary nailing and his complication rate amounted to 21%, too. These were cases of non-union (21%) and implant failure (21%) and required corrective surgery in 13% of the cases.15 A recent study done at Aga Khan University Hospital with a sample size of 50 patients with subtrochanteric fractures had a complication rate of 26% cases.16

The complications of this device include mechanical complications like screws cut out, implant breakage. We did not encounter these complications in our study. The biological complications include malunion, non-union and delayed union. In our study, the only complicated we encounter was delayed union in 4(12.75 %) cases. All these 4 cases had a history of high energy trauma associated with the fracture. These cases were successfully treated with corrective dynamization. Varus malalignment is another complication; no cases of displacement or malalignment of the neck fracture were met. We conclude that, provided optimal reduction and adequate compression are achieved intra-operatively, a single proximal screw may suffice for the fixation of the fracture.

The current study on radiological outcomes of treating acute subtrochanteric fractures with the intramedullary nail in recon mode, we had a larger sample size of 48 patients and this time, our complication rates were lower, i.e. 12.75%. The complications were seen in the form of delayed union (8.33%) and the cases with delayed union all had a history of high energy trauma associated with the fracture. Corrective dynamization of the nail had to be performed in these patients for a full recovery. Except for 8 out of 40 patients, all had full weight-bearing status after being discharged. Partial weight-bearing was seen in 8 patients due to multiple other injuries that these patients had, other than subtrochanteric fractures. In the previous studies, the delayed union was not evaluated as a parameter of healing which was focused on in our study. The major limitation of this study is its retrospective design.

In summary, this study suggests that the use of Intramedullary Nail in Recon Mode is a viable treatment option for subtrochanteric fractures with a high success rate of bone union and a reduced rate of complications mainly delayed union. In contrast with other studies, the complication rate was lower, this indicates that other pathophysiological, demographic or operant reasons could be the cause of the complications. Further studies are required to evaluate the effectiveness of this technique in treating subtrochanteric fractures and to compare its effectiveness with other modalities of treatment.

Clinical and functional outcomes following platelet rich plasma in the management of knee osteoarthritis: A case series in a tertiary care hospital