Objective: To determine the experience at the Aga Khan University Hospital in diagnosing and treating adult patients with primary lymphoma of bone.

Methodology: All patients with Primary lymphoma of bone (PLB) that were diagnosed and/or treated at Aga Khan University Hospital, Karachi from 2005 to 2019 were included as part of this study.

Result: There were 17 patients with PLB including 13 (76.5%) males and 4 (23.5%) females with a mean age of 44 ± 16.5 years. Nine patients were between 30-59 years of age at diagnosis. The mean follow-up time of patients was 80±46.7 months. Six patients had tumours of pelvic bone followed by tibia (5) and femur (4). Four patients had a pathological fracture at the time of presentation whereas 2 (11.8%) required surgical fixation of the pathological fracture. The stage of the tumour was based on Ann Arbor classification. Nine (52.9%) cases had Stage 1 disease, 7 (41.2%) had stage IV disease with metastasis in extra nodal tissues. As for treatment, every patient received chemotherapy whereas 5 (29.4%) received adjuvant radiotherapy. Complete remission in the size of the tumour was seen in 11 (64.7%) patients while 6 (35.3%) had partial remission. Post-treatment, 4 (23.5%) patients expired. The mean Overall Survival (OS) time was 80.18 ± 46.71months with a survival rate of 76.5%

Conclusion: Primary lymphoma of the bone can be treated with medical regime and good prophylactic surgeries to avoid pathological fracture such as intramedullary nailing.

According to the WHO classification, primary lymphoma of the bone (PLB) is defined as a monostotic disease involving a single skeletal site with or without the involvement of the regional lymph nodes, or as a polyostotic disease affecting multiple skeletal sites without visceral or lymph node involvement.1 Primary lymphoma bone (PLB) is extremely rare. The diagnosis is based on cortical and adjacent soft tissue involvement. On the contrary distant visceral and lymph node involvement is part of PLB or not is controversial in the literature. PLB affects 1.7/1,000,000 people in US with 5% of extra nodal involvement and 3% malignancies.2,3 It is a tumour of lymphoid tissues as lymph nodes and spleen.4 It presents with pain or swelling of the affected area. The tumour can be low grade, intermediate or high grade. Burkett's lymphoma is an example of a fast-growing tumour.4 PLB contributes to only 3% of all bone tumours and is usually seen in adult life. It can occur in all bones but predominantly in bones with marrow and most are large cells with B cell lineage, called diffuse large B-cell lymphoma (DLBCL).4,5 On plain x-ray, it can present with the lytic pattern, sclerotic pattern, increased density pattern, or near normal which makes biopsy important.4,6

Due to the low prevalence even in countries with good record maintainence as the United States, the information on PLB is scarce. This study aimed to determine the experience in diagnosing and treating adult patients with PLB in a tertiary care hospital of Karachi. The paediatric population was excluded because PLB in children is treated as a systemic disease rather than an isolated bone pathology.

A retrospective cross sectional study was conducted on all patients diagnosed with PLB or treated at AKU from 2005 to 2019. The diagnosis was based on a biopsy of the bone tumour. Patients were included in this study regardless of sex, race, age and co-morbids. Moreover, patients who had primary lymphoma other than bone or had received treatment for a Secondary Lymphoma of bone were excluded.

Approval for the study was obtained from the Ethical Review Committee of the institution. Patients who were part of the study were identified using medical record numbers. Noted were demographics of the patients including their age, sex, site of tumour, Follow-up (in months), Co-morbids, Type of Lymphoma, Histological subtype of Lymphoma, size of the primary tumour, stage of cancer, involved bone, presence of extra-lymphatic spread, pathological fracture, modality of treatment including Chemotherapy, Radiotherapy, Immunotherapy and surgery, type of remission, number of relapses, size of tumour after treatment (in case of incomplete remission) and post-chemotherapy complications. The collected data was analysed using Statistical Package for Social Sciences v. 21 (SPSS). Means and frequency were calculated along with survival analysis using the Kaplan-Meier test.

Some patients had comorbids along with the tumour in which 2 (11.8%) patients had Diabetes Mellitus type 2 and 2 had hypertension. Hepatitis B, Gilberts syndrome, and ischaemic heart disease were seen in only 1 (5.9%) case each. All the patients had non-Hodgkin lymphoma DLBCL type.

Most of the patients had a tumour in the Pelvic bones followed by the femur, tibia, radius, and scapula (Figure-1). 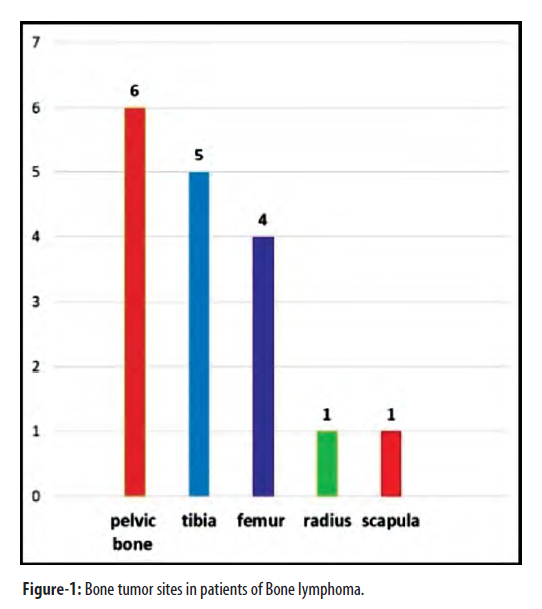 The staging of the tumour was based on Ann Arbor classification7 Stage 1 disease was seen in 9 (52.9%) patients; 7 patients (41.2%) had stage IV disease with metastasis in extranodal tissues. One (5.9%) patient had stage II disease. As for treatment, every patient received chemotherapy: 16(94.1%) received RCHOP (Rituximab, Cyclophosphamide, Doxorubicin, Vincristine, and Prednisolone), 3 (17.6%) received a high dose (Methotrexate) MTX along with RCHOP regime, 1 (5.9%) was given RDHAP (Rituximab, Dexamethasone, cytarabine, and Cisplatin). Five (29.4%) patients returned with febrile neutropenia for which chemotherapy was stopped and treatment was given. One (5.9%) patient each presented with acute gastroenteritis and oral thrush whereas 10(58.8%) patients tolerated chemotherapy well. 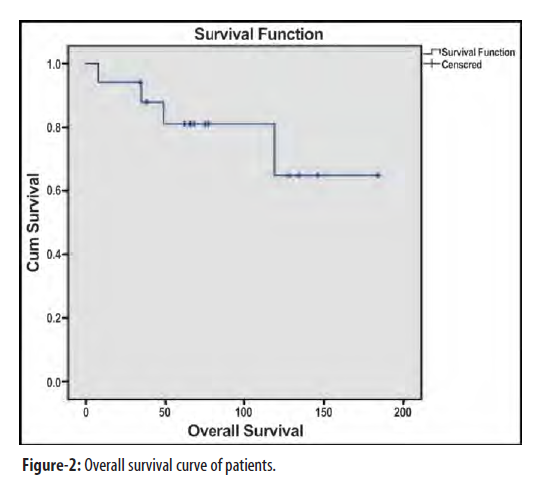 Primary bone lymphoma (PLB) is extremely rare presenting with pain and swelling on the affected area.2 The current study was carried out to share our experience of patients with PLB on their diagnosis and treatment. To our knowledge, this is the largest study done in the subcontinent (Pakistan, India, and Bangladesh) which discusses the patients with the disease and their prognosis. Even the Surveillance, Epidemiology, and End Results (SEER) database of the US does not include the data regarding the effect of chemotherapy on these patients.2 The principle to treat PLB is far different from sarcomas.3 In recent times much progress has been made to diagnose and stage the disease by using PET CT. This provides the anatomical and physiologic activities of the lesion. But still, no significant change in the incidence and overall survival has been noted. This supports the need to prospectively conduct a study at a multicenter and multinational level.2,5 Jacob et.al, also commented on the fact that appendicular tumour site is a predictor of survival compared to axial locations but some studies (which they describe in their publication) have different observations due to confounding factors.2 Differential diagnoses of such lesions include Ewing's sarcoma and osteosarcoma.3,4 According to the literature, PLB occurs most commonly in the femur followed by the pelvis. On the contrary in Japan, pelvis is the most common site. PLB shows a variety of presentations on plain X-ray. The X-ray of a patient of our series, who presented with a lesion in the right sacroiliac joint, showed patchy increased density along the right sacroiliac joint (Figure-3). 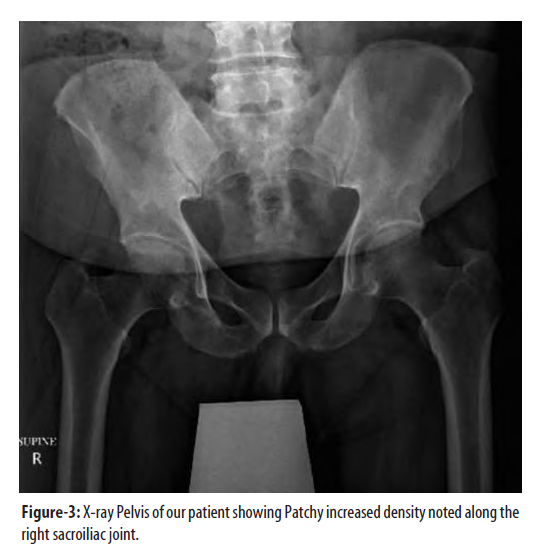 In our study also, most of the cases were of pelvic bone followed by tibia and femur. In PLB patients mostly present with pain (80-95%), swelling in 30-40%, and pathological fracture in 10-15%.9,10 The time between the disease onset and presentation to the clinic is generally short (8 months).8 Also, lymphoma in bones can develop around prosthetic devices especially anaplastic large cell lymphomas (ALCL) which present with swelling and erythema at the surgical site a few years after implant surgery.10 According to the literature, the median age of diagnosis of PLB is 45-60 years while our patients mean age was 44 years which is consistent with international data. For this reason patients presenting with pain or swelling should be advised plain X-ray to detect the lesion. In case a lesion is noted, MRI should be performed which is the gold standard for diagnosis of PLB. If PLB is in the bone with local extension of the lesion, PET CT is recommended for staging.5,8,11 In MRI more specific characteristics of PLB are present as compared to the plain X-ray film.6 For staging Ann Arbour system7 is used. Furthermore, metastatic workup and biopsy are done to know the nature of the disease and exclude other differentials, some studies suggest doing anchored multiplex PCR. Seven patients in the presented series showed metastatic disease. Bone tumours cannot be dealt with under the care of a single specialty. A multidisciplinary approach is recommended and at our center, such cases are discussed in Tumour Boards where orthopaedic oncological surgeons, medical and radio-oncologist specialists offer their expert opinion for the various treatment choices. The factors under consideration include age, socioeconomic factors, and marital status. Age is an important predictor of survival which could be due to the ability to endure chemotherapy and lesser comorbidities play a significant role in giving treatment options to the patients. Higher socioeconomic and married patients also show a better prognosis when compared to their counterparts.2 The first choice and evidence based treatment for DLBCL is cyclophosphamide, doxorubicin, vincristine, and prednisone (CHOP) plus etoposide. This has shown complete remission. Immunotherapy with rituximab (R-CHOP) is not well established in literature because most of the data is from the time when rituximab was not available in the market.4,6 Similarly, offering radiotherapy is controversial and can be on case based need, still further clinical trials are needed to prove its efficacy.8 It is also recommended that immunotherapy should be given before radiotherapy and currently R-CHOP is the first line treatment for PLB.11 If PLB is in a weight bearing bone then weight bearing limitations should be placed or the patient should be in protected weight bearing to prevent a fracture. At our institute the patients are discussed in tumour boards and the board decides on case need basis that whether patient needs radiotherapy or not. On the contrary, in a study patients with advanced-stage disease, who were treated with chemotherapy plus radiotherapy, had a poorer outcome compared with those who were treated with chemotherapy alone. Post treatment once remission is achieved, strict follow-up is required. Literature has reported a local relapse of 7-10% and 17-22% of distant metastasis.11

This study proves that PLB can be treated without any surgical intervention. Primary lymphoma of bone can be treated with good medical management. Prophylactic surgery is done to avoid pathological fracture for example intramedullary nailing in the femur. In this situation surgical morbidity can be avoided by early diagnosis and a multidisciplinary approach. Chemotherapy and if needed radiotherapy is applied.