Objective: To study the frequency of the thigh, hip and groin soft tissue sarcomas and retrospectively analyse the management, treatment results, and outcomes of these uncommon malignant tumours, in a tertiary care hospital of the city of Karachi.

Methodology: Data of soft tissue tumours registered from 2017-2018 was retrieved during January 2019 to March 2019 from Aga Khan University Hospital, Karachi bone and soft tissue tumour registry. A retrospective review was performed and all soft tissue tumour cases treated with surgical intervention (with adjuvant /neoadjuvant therapy) or palliative intention were included.

Result: Total 119 cases of soft tissue tumours (STS) were identified out of which 85 were malignant cases (sarcomas) while 30 were benign. On presentation 84 (70.6%) were primary cases. On topographical distribution, there were 25 patients who had hip, groin and thigh sarcoma. Of these, 15 were males and 10 were females.  As treatment, neo-adjuvant radiation was done in 4 (16%) patients and adjuvant chemo/radio therapy was given to 13 (52%) patients. Wide margin excision was performed in 19 (76%) patients and 4 (16%) had amputation.  Reconstruction was offered to 3 (12%) patients. In post-surgical complications, 1 (4%) patient had wound infection. On final surgical histopathology, majority of the sarcomas were liposarcomas, myxofibrosarcoma, synovial sarcoma and Leiomyosarcoma.  Post-surgery recurrence occurred in 7 (28%) patients. Overall survival was 76%.

Conclusion: In treatment of soft tissue sarcoma, limb salvage is an achievable option and survival results are also good.

Sarcomas are a diverse group of tumours, malignant in nature, with different clinical features and outcome. These rare tumours arise from skeletal and extra-skeletal connective tissues including the peripheral nervous system. They primarily affect the limbs, pelvic girdles and the retro-peritoneum but can occur in any part of the body.1,2 During recent years, a few case series have been published enhancing our understanding of the natural history following resection of these tumours.3 Although, our research has evolved greatly, these tumours are still resistant to chemotherapy and radiation in most cases hence surgical resection remains the mainstay of treatment.4

Due to the relative rarity of these tumours, there is only a handful of literature available even during this day and age. The treatment strategies have changed over the years but one approach has been universally accepted by all tumour facilities around the globe which is the application of multimodal approach towards these tumours.5 This has drastically changed the outcomes of these sarcomas with more and more cases now being treated with curative and/or limb sparing intent. This was earlier considered as untreatable and hence dealt with a palliative goal.6-9 This was majorly true for sarcomas occurring in retroperitoneum and pelvis where they often tend to involve major blood vessels, putting the oncology clinicians and orthopaedic surgeons in a difficult situation.10

In a developing country like Pakistan, where good health care facilities are still a dream yet to be achieved, having a tertiary care set up like The Aga Khan University Hospital, with a dedicated musculoskeletal oncology team comprising of highly trained oncologists, an orthopaedic tumour surgeon and vascular surgeons, is a blessing. However, the management and outcomes of soft tissue sarcomas in our part of the world have never been evaluated. Hence this study reviews the management and outcomes of soft tissue sarcomas, showing the frequency of the thigh, hip and groin sarcomas at our institute.

Data of soft tissue tumour patients registered from 2017-2018 was retrieved during January 2019 to March 2019 from Aga Khan University Hospital bone and soft tissue tumour registry. A retrospective review of cases was conducted at the Aga Khan University Hospital, Karachi, department of Orthopaedics after getting exemption from the institute ethical review committee.  The data was retrieved from the bone and soft tissue registry proforma which had been filled at the initial visit of the patient and completed at the final follow up. The detailed proforma comprised of patient demographics (age, gender, comorbidities, hospital medical record number etc.), tumour related details, investigation details, treatment details, surgical details and post treatment details (complications, recurrence, survival). All soft tissue tumour cases treated with surgical intervention (with adjuvant /neo-adjuvant therapy) or palliative intention were included irrespective of age and gender. For tumour staging, American joint commission center (AJCC) staging system was used.11 Data was stratified later as per objective requirements by topographic distribution as cases of hip, groin and thigh. Data was entered and analyzed on statistical software SPSS 21. Descriptive statistics was calculated for quantitative variables while frequencies were calculated for qualitative variables. 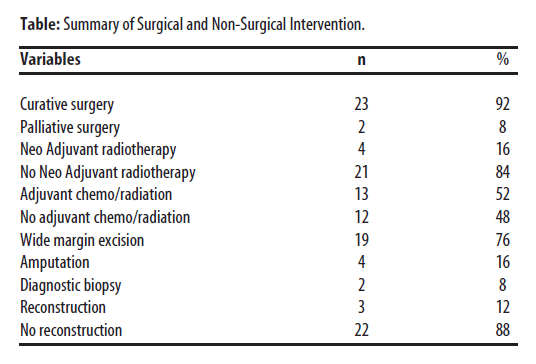 Curative intent was applied to 23 (92%) patients while 2 (8%) were treated with palliative intent. Of all the patients, 19 (76%) underwent wide margin excision and 4(16%) had amputation, 2(8%) had only diagnostic biopsies. Reconstruction was offered to 3(12%) patients which included vascular repair of femoral artery with contralateral reversed greater saphenous vein interposition graft, soft tissue graft and intramedullary nailing with free vascular fibula graft. In post-surgical complications, 1 (4%) patient had wound infection which was treated with oral antibiotics while 1 (4%) had iatrogenic injury in another hospital and was presented to us for a redo procedure. On final surgical histopathology, majority of the sarcomas were liposarcomas as it was reported in 6(24%) patients, 3(12%) patients had Leiomyosarcoma (Figure). 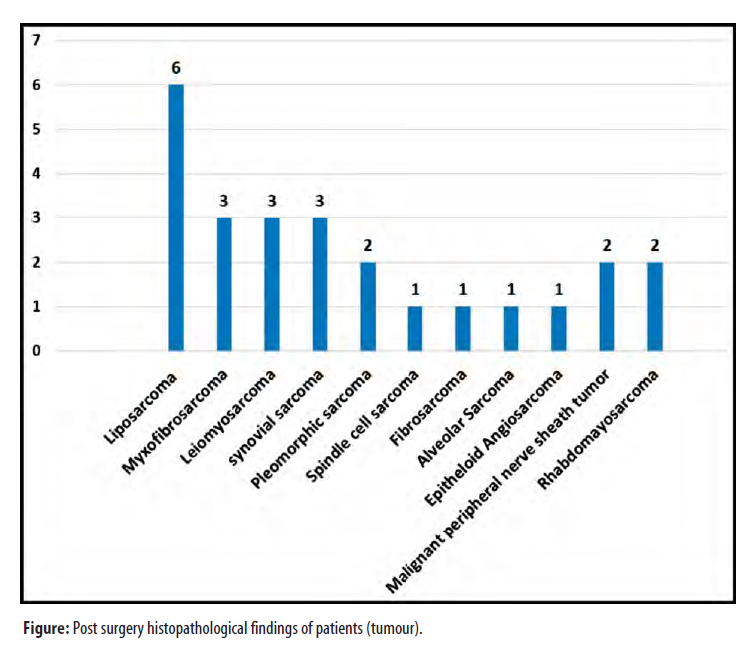 The present report highlights the advantages of having large focused prospective databases in tumour entities that are rare. Such datasets can be utilized not only for the prediction of prognostic factors but can identify varied and variable prognostic events at the time of presentation which influence the type of recurrence, i.e. disease specific survival, metastasis free survival, or overall survival.12-14

Most importantly, they provide a stable description of patient specific outcomes in a series of rare diseases, giving a baseline for predicted outcome and risk.

We conducted a retrospective analysis of prospectively collected data to assess the management strategies of these rare commodities employed at our institute and their outcomes with respect to histological type, post-operative complications, local recurrence, metastasis and overall survival. Vascular reconstruction was not considered a contraindication in our setup and vessel reconstruction was done wherever desired.

A multidisciplinary team was essential to our surgical approach. The preoperative team approach allowed for better surgical planning, removal of previously thought inoperable tumours based on outside hospital evaluations, more effective reconstruction, and improved outcomes.

This series consisted of 25 patients (15 males, 10 females) which is comparable to other case series previously published.10,15-17 Twenty-three (92%) patients were treated with curative intent while only 2 (8%) were treated for palliation. Limb salvage was possible in 82% of patients treated with curative intent. Comparably, similar rates of limb salvage ranging from 80% to 100%.18-20 have been reported in the previously published case series with similar number of cases.

It is possible to obtain reasonably good survival rates with careful pre-operative planning and appropriate and timely intervention. Recurrence of tumour remains an issue however. The use of adjuvant therapy in patients with limb sparing surgery for extremity STS has been widely accepted. Schwarzbach et al. report recurrence in 15.8% (n=3) of 19 patients in their study.10 A slightly higher figure of 21% has been reported by Song et al.15 Our study reports a recurrence rate of 28% (n=7) of 25 patients, 5 of which had recurrence with metastatic disease, one developed recurrence without metastasis and one had only distant metastasis (lungs). This high recurrence rate despite the fact that 52% of our patients received adjuvant therapy but still the survival rate in our patients was 76%.

Soft tissue sarcomas are classified histologically according to the soft tissue cell of origin, although the cell type is not part of the prognostic staging system. Additional studies, including electron microscopy, histochemistry, and flow cytometry, cytogenetic and tissue culture studies may allow identification of particular subtypes within the major histologic categories. Malignant fibrous histiocytoma is the most common histologic type (28%). Others are leiomyosarcoma (12%), liposarcoma (15%), synovial sarcoma (10%), and malignant peripheral nerve sheath tumour (6%).22 In our study however, liposarcoma was the most common histological type occurring in 24% of the patients. Other types included myxofibrosarcomas, synovial sarcoma and Leiomyosarcoma each reported in 12% patients. Other less common types included pleomorphic sarcoma, malignant peripheral nerve sheath tumour and rahabdomyosarcoma that were found in 8% patients.

The treatment of patients with STS involves a multidisciplinary team approach and most patients are eligible for limb-salvage surgery, usually combined with radiation. Following treatment the majority of patients can expect a painless and functional extremity.

This study, however, has some limitations. Firstly this study has a retrospective design which makes the inferior level of evidence compared to prospective studies and also this study is inherently prone to recall bias. Secondly, the sample size is very small and are thus not representative of the general population.