Methods: This retrospective study was conducted at orthopaedics section of Aga Khan University Hospital Karachi, Pakistan from July 2015 to December 2018. Data was retrieved from trauma registry from July 2015 till December 2018, including all patients who underwent percutaneous fixation for pelvic ring injury. Majeed pelvic score was used to determine the functional outcome.

Motorisation has made life easier but at the same time there are complications associated with it. Road traffic accident is a major public health problem due to the mortality and morbidity associated with it. According to the World Health Organization (WHO), approximately 1.35 million people die per year secondary to RTAs.1,2

Most of pelvic injuries are associated with high energy trauma; road traffic accidents, fall from heights or blunt trauma. Mortality rate associated with pelvic injury is 10 to 20%, which is mostly secondary to haemorrhage or associated thoracic injury or head injury.3 It is estimated that 15 to 45% of pelvic injuries involve the sacrum or there is sacro-iliac joint disruption.4,5 Posterior pelvic injury is critically important in pelvic injuries, which may involve fracture of the ilium, sacrum or sacro-iliac joint disruption. Different options for management of posterior ring injuries are conservative management, open reduction internal fixation with plating, sacral bar and triangular fixation systems or percutaneous fixation with cannulated screws.6

Open reduction internal fixation is done in prone position and requires extensive dissection of the soft tissue which leads to an increased chance of wound infection (up to 25%) and anaesthesia complications.

Percutaneous fixation of posterior ring injuries was described by Routte et al in 1993.3,7 As compared to open reduction and internal fixation, percutaneous fixation has the advantage of less soft tissue exposure, no associated risk of wound infection, less blood loss and can be performed in supine position in a poly traumatized patient.6

The outcome of pelvic injury management depends on early intervention, anatomic reduction and stable fixation which in term results in early mobilization and pain management. There has been evolution in the management of pelvis fixation with time, for posterior pelvic injuries percutaneous fixation is considered to be the choice of treatment.8

The purpose of this study was to evaluate the clinical outcome of percutaneous fixation for unstable posterior pelvic ring injuries.

The retrospective study was conducted at Section of Orthopaedics, Department of Surgery, Aga Khan University Hospital, Karachi, Pakistan from July 2015 to December 2018 with a minimum follow up of 10 months. Data was retrieved from the trauma registry. All patients who underwent percutaneous fixation with ilio-sacral screws for posterior pelvic rings injuries in the study period, were included. No formal sample size was calculated. Patients undergoing open reduction internal fixation with plate or managed conservatively were excluded.

Surgery was performed under general anaesthesia in supine position for all patients on a radiolucent table. Bowel preparation was done for patients and before surgery. Pelvis antero-posterior, inlet, outlet and lateral views were obtained to confirm proper position of the patient using fluoroscopy.

External fixator was applied where required to help in reduction. Initially closed reduction with help of manipulation of the external fixator or traction was achieved and confirmed under image intensifier. Once reduction was confirmed then guide wire was passed from lateral aspect of ilium in the safety zone into sacrum, perpendicular to the fracture line, confirming its position in AP, inlet, outlet and lateral view in fluoroscopy as shown in Image-1. 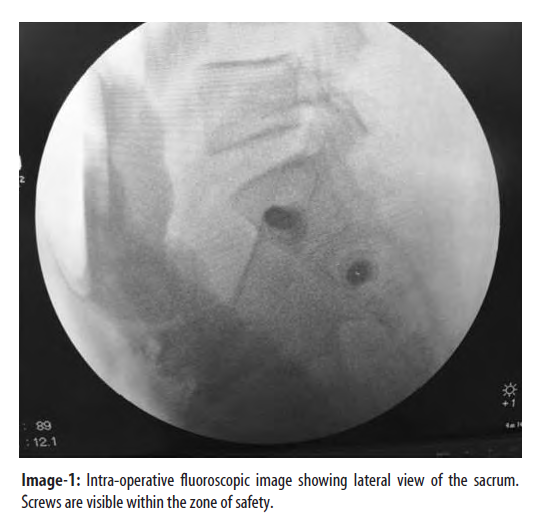 Once confirmed under image intensifier, the position of the guide wire then reaming was determined. Cannulated screws of size 73 mm were inserted (implant photograph shown in Image-2). 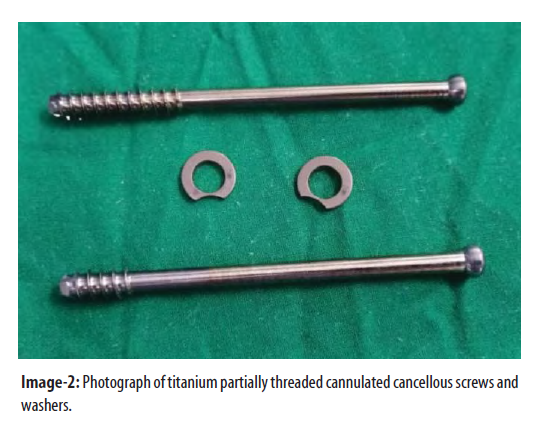 All data was analyzed by statistical package for the social sciences (SPSS software) version 21. Continuous variables were recorded as means with standard deviation and categorical variables were expressed as frequencies and percentages.

Total 31 patients met the inclusion criteria. Of them one was excluded due to mortality on 1st post op day secondary to haemorrhagic shock. Out of 30 patients 21 (70.0%) were male and 9 (30.0 %) were female. Overall mean age was 37.1±16.1 years. Twenty-seven (90.0%) were adult patients and 3 (10.0%) were from the paediatric group. Patients were further divided into three groups according to age, the percentage of patients in each group is shown in Figure-1. 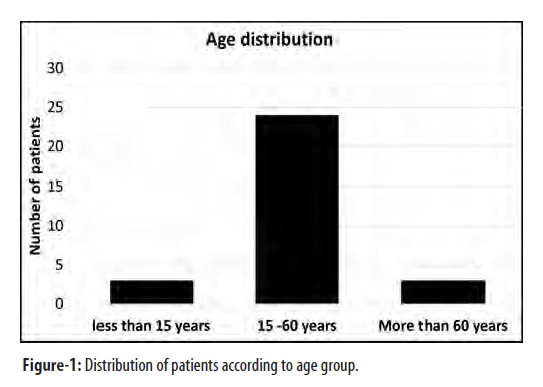 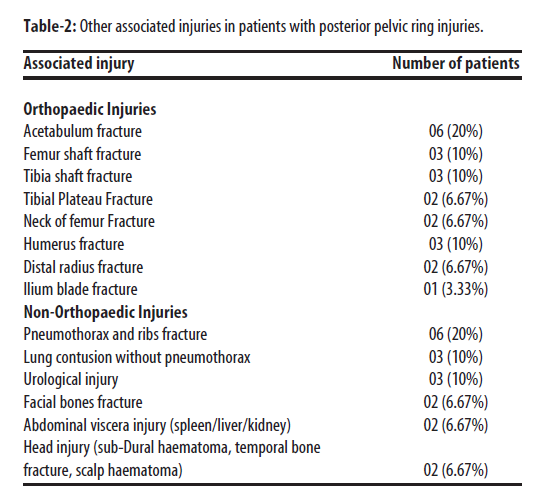 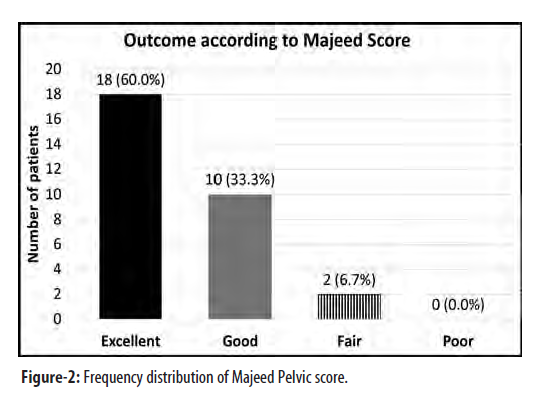 Three of our patients had complications post op. one patient died on 1st post op day due to haemorrhagic shock and was excluded from the study, 2 had implants failure.

One had back out of SI screws and the other had loosening of symphysis pubic plate, so revision surgery was done for symphysis pubic fixation and also ilio-sacral screws were revised.

Unstable pelvic ring fracture management has been challenging for orthopaedic/pelvic surgeons. Injuries of the posterior pelvic ring which include sacroiliac joint disruption, sacro-iliac joint fracture dislocation or sacrum fracture leads to posterior ring instability. The goal of the treatment is to save life and achieve stable fixation after reduction and return to functional life.

Results of the present study supported Majeed Pelvic Score as a tool for evaluation of pelvic injuries. In our study the mean age of patients was 37 years. Out of 30 patients, 21 (70%) were males and male predominance in pelvic injury cases has been reported previously by Ayoub MA et al,1 Amin et al,4 and Po Han Chen et al.22 Only one study showed female predominance conducted by Ayvaz M et al at Hacettepe University, Ankara, Turkey.23 However, our study reported, the post op mean Majeed Pelvic score as 85.76 on follow up. Out of 30 patients 18 (64%) were in excellent, 10(29%) in good and 2(7%) in fair group. Our study suggested promising outcomes in patients with Percutaneous fixation of posterior ring injuries with cannulated screws, which showed excellent functional outcome, with minimal blood loss and avoiding soft tissue striping.

Results of the previous studies from literature review were as follows;

Zaki et al showed excellent, good and fair outcome in 50%, 30% and 15% patients with stabilization of sacroiliac joint by plates and screws.24

Ayvaz M et al, conducted a study in 2011 at Turkey, a retrospective review of 20 cases with 2 years follow up, 19 showed excellent Majeed pelvic score and 1 patient was in good group. One ilio-sacral screw was changed for treatment of pseudoarthrosis. No fixation failures were reported.23

Po Han Chen et al, conducted a retrospective analysis of 32 consecutive patients with unstable pelvic ring in Taiwan (January 2002 to September 2009). Their study showed better outcome with percutaneous fixation for posterior pelvic ring injuries. Out of 15 patients, 8 were in excellent group, 4 in good, 2 in fair and 1 in poor group.22

Stabilization and fixation of posterior ring injuries with percutaneous screw fixation is a better option with reduced blood loss, better stability without stripping off of soft tissue and avoiding wound infection and early mobility.

Limitations of our study were a small sample size and a retrospective design. It was an audit so all those patients who met the inclusion criteria were included and there was no need of sample size calculation.

Further studies with larger sample size are needed. Our recommendation is posterior pelvic injuries should be managed with percutaneous fixation with cannulated screws, as it avoids extensive exposure for open fixation, less wound complications and reduced blood loss. Combined with fixation of anterior ring when indicated for stable fixation and better functional outcome.