Methods: This was a prospective study for the long bones fracture managed by MIPO using locking compression plate in thirty patients from January to December 2017. All the skeletally mature patients and the patients with osteoporotic bones were included. Patients with open injuries, paediatric patients and plating done in non-traumatic conditions were excluded. Patients were followed as outpatient after one week, six weeks, after three months and then after 6 months.

Conclusion: LCP system is a reliable and safe tool that extends the options for fixation by plating and has advantages over the other systems in term of stability that can be achieved with it especially in osteopenic bones.

For the management of long bones fractures, with and without inter-articular involvement, there are multiple options available. These include plating, intramedullary nailing and external fixator.1-3 The final decision about which treatment modality is to be used depends upon the fracture configuration, soft tissue involvement and quality of bone as well as patient-related factors.4,5 For the diaphyseal fractures intramedullary nailing is commonly used. For metaphyseal fracture with and without articular involvement, plating is commonly employed. If the soft tissue sleeve is intact, plating is the choice and if there is soft tissue compromise, external fixator is selected.5-7 Intramedullary nailing of diaphyseal fracture is perhaps the most elegant method preferred. With the development of proximal and distal locking, there is negligible chance of rotational malalignment. Intramedullary nailing has its limitations in articular and periarticular fractures. Nailing a metaphyseal fracture results in malaligment. Plate fixation of fractures provide good mechanical stability but the traditional technique requires extensive soft tissue disruption. Extensive soft tissue exposure disrupts the blood supply of the fracture site resulting in delayed and nonunion.8-10 There is change of emphasis from mechanical to biological priorities in the fracture fixation in recent decade. Thus with the aim to minimize stripping of the soft tissue around the fracture, minimally invasive plate osteosynthesis (MIPO) has been developed where by the plate is placed through small incision with little soft tissue disruption.11-13 In order to avoid  direct contact and friction between the conventional plate and bone, the new so called locked internal fixator have been developed, consisting of plate and screw systems where the screw are locked in the plate, so that there is no need for the plate to touch the bone at all.5,14,15 The interlocking of screws within the plates allows minimization of bone to implant contact. Instead the bone is fixed at each point along the length of fixator.16-18 These plates have combi holes allowing placement of both locking and conventional screws. The first locking plate was introduced about two decades ago for use in spinal and maxillofacial surgery.5,7,19,20 The objective of study was to evaluate the outcome of locking compression plate fixation using MIPO technique in skeletally mature patients with long bone fractures.

This study was conducted in a tertiary care trauma centre from January -December 2017. A sample size of 30 cases was calculated with 95% confidence level and 12% absolute precision `while taking expected frequency of failure of LCP to be 13%. Total 30 patients of long bones fracture fixed with locking plates using MIPO technique were managed and evaluated during the study period. The inclusion criteria in our study was all skeletally mature patients of both sexes with epiphyseal-metaphyseal fractures of long bones, age more than 18 years and patients with osteoporotic bones. Patients with open injuries, paediatric patients and plating done in non-traumatic conditions were excluded from the study. Through history and physical examination was done by primary investigator. All those patients fulfilling the inclusion criteria were enrolled for the study. The study was explained to the patients and informed consent was taken. Data was recorded on a proforma, (Appendix) starting from patient admission.

The proforma includes details about the patient, fracture characteristic, operative procedure and follow-up with outcome. For the follow-up, patients were called to the out-patient clinic at second week, fourth week, three months and six months and assessment of clinical and radiological healing was done.

The data collected from the conducted research study was analyzed as follows; gender of participants were represented by M: F ratio. Mean and standard deviation were used to scrutinize continuous response variables such as age, duration of surgery and amount of blood loss. To compare the per-operative and post-operative blood loss and haemoglobin levels independent sample t-test was applied. Before application of bivariate analyses, data normality was checked via Kolmogorov-Smirnov and Shapiro-Wilk tests which shed data to be normal (p >0.05). Patients were followed up to evaluate qualitative response variables such as early complications, post-op ambulation status, range of motion, wound healing, radiological healing, outcome of clinical union and indication for revision surgery. For these qualitative response variables, frequencies and percentages were used. Chi-square analyses were used to study the significance of changes in ambulation status, range of motion, clinical union and radiological union over the follow up period. P-value <0.05 was considered statistically significant. 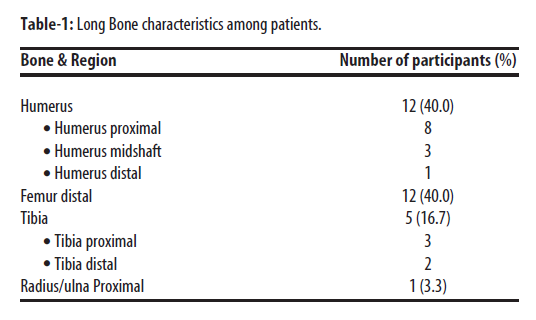 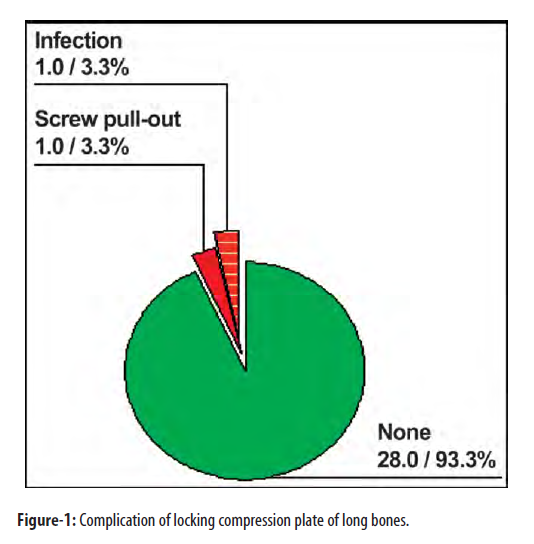 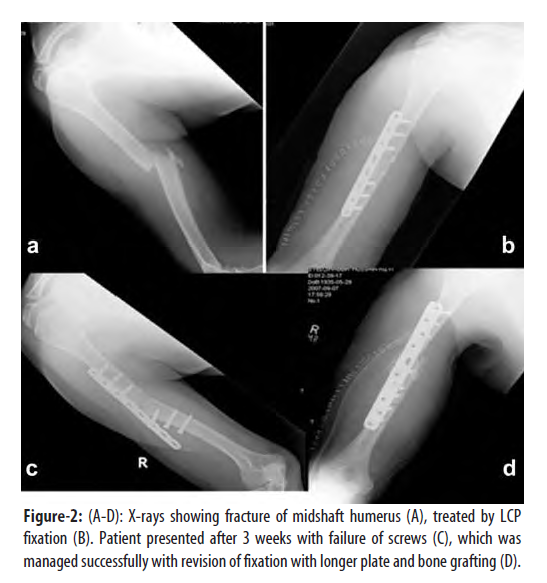 and 01 (3.3%) with proximal humerus fracture had deep infection which was debrided and was converted to hemiarthoplasty in the second stage.

In an effort to overcome the limitations associated with traditional plating methods, primarily for osteoporotic bones, therefore, locked plate technique was evolved.11 The evolution of screw torque and plate bone interface, friction is unnecessary with locked plate design. This technique significantly minimizes the amount of soft tissue compromise required for plating, conserving the periosteal blood supply and facilitating the use of MIPO technique. With the advent of locked plate, orthopaedic surgeons can manage the fracture with indirect reduction.12 The ease of application and fewer complication in early clinical trials have contributed to the proliferation of this technique.

We use this technology in all skeletally mature patients with long bones fractures and fractures in osteopenic bones.

The mean duration of surgery in our study was 98.0±27.1 (range= 50-150) minutes. According to the study conducted by Hasenboehler et al,10 the mean operative time was 86.6 min (range= 50-170) which is comparable to our study. We achieved good results regarding ambulation and union rates. All patients with lower limb fractures showed full weight bearing (FWB) at 6 months (range= 12-24 weeks). In the study conducted by Hazarika et al.11 Time to full weight bearing (FWB) for the lower limb fracture was 18.1weeks (range= 8-32 weeks). These results are comparable to our study. Full range of motion (ROM) at respective joint was observed in 29(96.7%) at 3 months. Out of twenty-nine, twelve patients had upper limb fractures and 17 had lower limb fractures. One patient of humerus shaft fracture was not permitted full range of motion (ROM) at 3 months due to pain but was permitted partial range of motion (ROM) at 6 months postoperative follow up. In a retrospective study conducted by Hasenboehler, Ricci D et al,16 on application of LCP using minimally invasive technique (MIPO) in 32 diaphyseal fractures and distal tibia fractures. All patients (100%) attained full range of motion (ROM) by about 9 months. These results are comparable with our study.

We had only 01(3.3%) patient with wound related complication (wound dehiscence), while 29 (96,7%) had no complications related to the wound. Fracture healing was defined as radiological evidence of bridging mature callus combined with pain free full weight bearing. Out of 30 patients, 28(93.3%) had complete healing at 6 months period. In 02 (6.7%) patients there was no radiological healing at 6 months. Koukakis et. al.12 shared their experience using proximal humerus interlocking osteosynthesis (PHILOS) plate in proximal humerus fracture. In their study over the span of three years, 20 patients with mean age of 62 years were treated with PHILOS plate. They reported 100% rate of fracture union. These results are comparable to our study. We had 2 complications, one with screw pullout and another had deep infection. Both of them required revision surgery. The patients with screw pullout from the humeral shaft required removal of plate and screws followed by redo-plating with longer LCP and bone grafting. The patient with deep infection following fixation with PHILOS was managed with wound debridement, removal of plate and intravenous antibiotics. He was later on managed with shoulder hemiarthoplasty.

Sommer et al20 in a case series of 144 patients 169 fractures, treated with locking compression plate (LCP) reported 27 complications (16%), including 5 implant loosening and four cases of implant breakage. According to him implant failure was the result of intraoperative technical error, including the use of two short plates and those that did not have adequate spanning segments (empty screw hole) over the fracture site.

Vallier et al21 reported on a failure locking compression plate (LCP) fixation in 6(13%) out of 46 distal femur fixation. In the series, 2 failures were due to plate breakage secondary to fatigue from the motion through non-union. The remaining 4 cases failed secondary to screw breakage at screw-plate interface. Interestingly each of these reported cases had medical comorbidities like DM, obesity, tobacco use and osteoporosis.

We had 12 patients with distal femur fracture treated with Locking compression plate (LCP-DF), with no complications regarding the plate breakage, screw pullout, varus drift, malalignment, delayed and nonunion. Our results in distal femur fractures was better (100%) as compared to studies mentioned above. But we had a small sample size.

There are several limitations in our study. Firstly, our study included two surgeons performing the procedure. While a standard protocol was applied for all the surgeries, slight variations in surgical technique as well as individual learning curve associated with performing a new procedure or use of a new implant could have influenced the result of the study. Secondly there was no control group of the patients treated conservatively or with an alternative implant.