Methods: This cross sectional series was performed at the Department of Trauma and Orthopaedics, Jinnah Postgraduate Medical Centre, Karachi from January 2015 to December 2019. A Total of 149 patients with close fracture neck femur of either gender between 20-60 years of age were included in the study. Patients with hip arthritis and pathological fractures such as tumours were excluded. Minimum three cannulated screws were used to fix the fracture with parallel configuration in compression mode. Patients were followed and evaluated for fracture healing and related complications such as nonunion and Avascular necrosis for two years. Descriptive statistics were calculated and stratification was done. Post stratification chi square test was applied taking p-value ? ≤0.05 as statistically significant.

Conclusion: Although cannulated screws are a universally accepted method of fixation for femoral neck fractures, the incidence of complications such as Avascular necrosis and non-union is quite high particularly in young males meeting a motor vehicle accident, undergoing open reduction for displaced fractures even with early diagnosis and treatment.

Femoral neck fracture (FNF) is a common injury in elderly people resulting from trivial trauma due to osteoporosis accounting for almost half of the fractures around the hip1 and its incidence is rising in parallel with an increase in aging population.2 However fracture neck femur in young patients constitute only a small proportion of 3% of all fractures around the hip3 resulting from high velocity injury such as road traffic accident, sports related trauma and falls from a height.4 This fracture has been designated as "unsolved fracture" since the treatment has been controversial whether to save the head or replace it.5

The treatment of choice in low demand elderly people is joint replacement allowing early mobility and avoiding problems of prolonged recumbency and revision surgery.6 In contrast young patients with high functional demand and good bone stock, treatment options revolve around to preserve native femoral head and to restore normal hip anatomy and mechanics.1 For that reason early reduction and fixation of the fracture is preferred which is achieved by the placement of multiple screws across the fracture and may be performed by either closed or open reduction using a standard lateral approach or a more limited percutaneous technique.7,8 However this method is not free of risks and treatment failure can lead to complications such as failure of fixation, non-union, infection and avascular necrosis.2,3,9

The incidence of Avascular necrosis (AVN), fixation failure and fracture non-union following internal fixation of the femoral neck fracture was reported to be 20 to 30%, 8 to 15% and 10 to 30% respectively.2,10,11 Avascular necrosis is a devastating complication of femoral neck fractures and may lead to femoral head collapse and subsequent osteoarthritis.6 Tenuous blood supply to the head of femur and higher intracapsular pressures have been demonstrated as the possible mechanism of development of avascular necrosis after fracture neck femur.11-13 In undisplaced fractures where the capsule is intact Raised intra-capsular pressure can cause a tamponade effect compromising blood supply to the head of the femur leading to avascular necrosis.11-13 Furthermore, fracture displacement can damage blood vessels and disrupt blood flow to the head of femur.14,15 Possible causes of poor outcome due to other complications such as non-union, infection and fixation failure due to loss of reduction may be related to a variety of factors such as patients' age, fracture displacement at the time of injury, time to fixation, anatomical reduction of the fracture, method of reduction and placement of screws.6,9 Therefore the aim of this study was to evaluate the risk factors for postoperative complications in fracture neck femur treated with cannulated screws.

This cross sectional study was conducted on patients presenting to Jinnah Postgraduate Medical Centre (JPMC), Karachi, with fracture neck femur from January 2015 to December 2019. Convenient sampling method was used by recruiting patients prospectively in a consecutive manner from emergency and outpatient departments for the initial three years of the study and were followed up for a minimum duration of two years to note complications.

Skeletally mature patients of either gender with closed fracture neck of femur presenting within two weeks of injury were included. Patients with open or infected fractures, with hip arthritis and pathological fractures were excluded.

The study was conducted after approval from institutional review board. Patients meeting the inclusion criteria were enrolled in the study. Informed consent was obtained from all the patients. The diagnosis and degree of displacement of fracture neck of femur was established by taking the history, performing a physical examination, and examining X-rays of the involved hip (Antero-posterior and lateral views). Fractures were divided according to Garden classification.15 Time from injury to surgery was recorded in days.

Surgery was performed upon traction table in supine position. After the induction of anaesthesia, close manipulation and reduction of the fracture was done under fluoroscopy. Quality of reduction was assessed using garden alignment index (GAI) in both anteroposterior and lateral views.16 The GAI is an angle measured between medial shaft of femur and the central axis of medial compressive trabeculae in femoral head and considered acceptable between 160-180° in both AP and lateral view. In cases of inadequate close reduction, open reduction was performed through anterolateral approach. Three guide wires were passed with the control in anterior, posterior and inferior direction in an inverted triangle fashion, from lateral side of the shaft to the neck and head of femur at or just above the level of lesser trochanter. In some cases two guide wires were passed superiorly and inferiorly. Drilling was done over the guide wires with cannulated drill bits and length of the screws was measured. Parallel Cannulated screws were used to fix the fracture in compression mode. Postoperatively, in bed mobilization was done on the evening of the surgery and non-weight bearing mobilization out of bed was allowed as the pain tolerated. Weight bearing was gradually progressed till six weeks postsurgery when patients were allowed to bear full weight.

The patients were followed at two and six weeks and every three months thereafter for two years for clinical and radiological assessment. The principal outcome measures were fracture union, and related complications such as non-union and AVN. Union was defined as asymptomatic patient with no pain at fracture site and obliteration of the fracture line and re-establishment of trabecular pattern on anteroposterior and lateral radiographs.9 When there was persistence fracture line on radiographs and pain at the fracture site at least six months after surgery, it was labeled as non union.9 Presence of subchondral sclerosis and segmental collapse of femoral head on X-rays was termed avascular necrosis.9 The data were recorded on the Performa. Confounding variables and biasness were controlled by strictly following inclusion criteria. 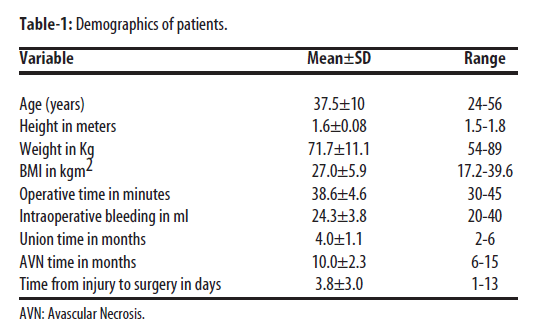 Fracture union was achieved in 126 (84.6%) patients with mean union time of 4.0±1.1 months whereas 23 (15.4%) fractures remain un-united at six months. Out of 23 non unions, five patients developed infection and seven patients had loss of reduction and failure of screws. Rate of development of avascular necrosis was noted in 28 (18.8%) cases with the mean AVN time of 10.0±2.3 months. Five patients had concomitant non-union and AVN. 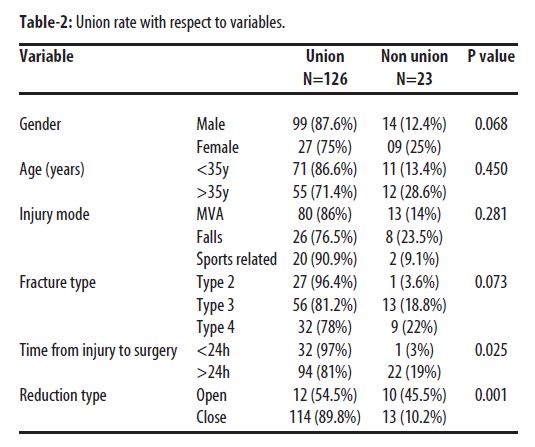 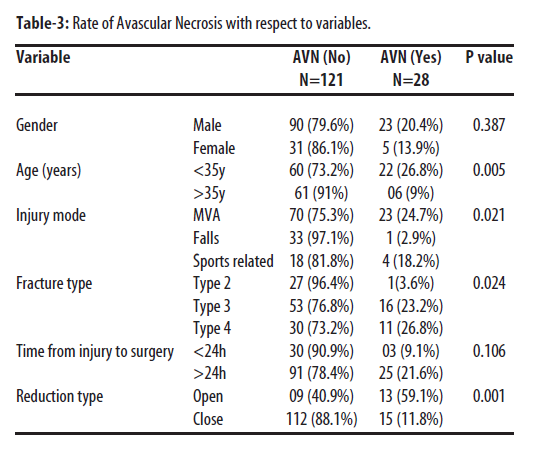 A significant association of avascular necrosis was observed with fracture type. Majority of the patients had either garden type III or IV fracture; 16 (23.2%) with type III and 11 (26.8%) with garden type IV fracture (Table-3).

Fracture union was achieved in more than 80% of the patients. Acceptable reductions whether open or close was seen in all but two patients. In total, 46 (18.8%) patients developed complications of AVN, non-union (15.4%), infection (3.4%) and loss of reduction and fixation failure (4.7%). It was imperative to find that fracture displacement, mechanism of injury, younger age, time from injury to surgery and open reduction of the fracture when close reduction cannot be achieved has a major impact on the development of these complications. Interestingly there was higher frequency of AVN and non-union in our cases where open reduction of the fracture was performed. The reason for increased incidence of complications in such cases may be related to the fact that multiple attempts of closed reduction were tried to achieve acceptable reduction failing which open reduction was done. Multiple attempts of close reduction may damage blood supply to the femoral head leading to higher chances of non-union and AVN.1,16

Kim JY et al8 found association of AVN with fracture displacement. In their series of 52 patients, all the patients who developed AVN (n=12, 23%) had either garden III or IV type displaced fractures. Similarly all five cases of non-union were related to displaced type III or type IV fractures in their series. In our series almost all cases with non-union (96%) and AVN (96%) were found to have displaced fractures. The rate of AVN seen in our series was reaching up to 18.8%, slightly less than that found by Kim JY et al,8 although the figure for AVN in the literature is very wide ranging from 0% to 86%.6,10-14,17,18

We found AVN more in patients younger than 35years comparable to national data18 where more than half of the patients were more than 35 years of age who developed AVN with fracture neck femur. International data also suggest a higher incidence of AVN in the younger population.6,10,11 However some studies reveal no impact of age on the frequency of development of AVN in fracture neck femur.2 In contrast, in a retrospective analysis by Kenan S et al19 on 27 patients with fracture neck femur treated with cannulated screws, four (14.8%) patients developed AVN or non-union and all patients were older than 50 years. In our series age had no impact on the development of non-union.

Most of the studies suggest a history of fall as the most common mechanism of injury,9,20 however in our analysis, motor vehicle injuries were the most common cause of fracture neck femur and subsequent development of AVN. The literature is sparse in this regard. In a recent study however it may be related to the fact that motor vehicle accidents are high velocity trauma leading to multiple injuries and more displacement of the fracture fragments and damage to the blood supply creating more possibilities of AVN.21 In addition diagnosis of fracture neck femur may be delayed or missed in polytrauma patients which can cause more complications such as AVN or non-union. Mechanism of injury was not related to development of non-union in our series.

Main strength of our study is that it represents a large number of young patients with prospective analysis and no loss to follow up. However we still did not include patients with comorbids such as diabetes, Hypertension etc to see their relationship with complications of non-union, infection, fixation failure and AVN. In addition this was a single centre based study and multicentre studies should be conducted to generalize the results.

Cannulated screws are the universally accepted fixation method for femoral neck fractures in young adults and despite early diagnosis and treatment, the incidence of complications such as avascular necrosis and non-union is quite high particularly in young males with motor vehicle accident, delayed fixation and displaced fractures.