Our experience of Mega-prosthesis in bone tumours: A retrospective cross-sectional study in a tertiary care hospital

Objective: To evaluate the oncological and functional outcomes of bone tumour patients who underwent reconstruction with mega prosthesis.

Methodology: A retrospective study was conducted in the department of Orthopaedics Aga Khan University Hospital, Karachi. All the paediatric and adult age group patients diagnosed with malignant, benign and metastatic bone tumours and meeting the inclusion criteria were selected and analysed.  Retrospective data was collected from January 2008-January 2018.

Conclusion: With a good patient selection, adherence to the principles of tumour surgery and an adequate applied knowledge of mega prosthesis insertion, a good functional outcome was achieved.

Since the introduction of first endoprosthesis in 1943 by Austin Moore, made of Vitallium (Chromium Cobalt Alloy), and the description of Total Femur Replacement by Buchanan in 1950, there had been a significant change in the management of extremity bone tumours in favour of limb salvage surgery.1,2 The introduction of chemotherapy particularly neo-adjuvant chemotherapy, the advances in surgical and diagnostic techniques, and the multidisciplinary approach allowed limb salvage procedures for sarcoma, with no obvious detectable differences in oncologic or functional results when compared with amputation.3,4 Hence, since 1980s, mega prosthesis had become the cornerstone of limb salvage surgeries, owing to their facilitation in early return to function, ability to bear weight, easy availability and better cosmetic appearance. Their use, in general, has drastically increased since the introduction of off-the-shelf modular prosthesis instead of previously used custom prosthesis. It is due to all of these factors that the limb salvage surgery is now indicated in up to 90% of the musculoskeletal tumours.4

In the light of these factors, there had been an evolution over the past three decades, in the biomedical engineering and refinement of surgical technique to enhance the oncological and functional outcome of endoprosthesis replacement which has, since then, become the primary modality of choice for limb salvage surgery.4,5 However, in the developing world, cost has been the most decisive limitation in the use of these implants. In a country where public has to pay for these services from their own resources, it becomes an expensive and unaffordable modality of choice and thus, presents a different kind of challenge.5 This is further aggravated by the non-availability of allograft in the country and absence of a bone bank. We are presenting our experience with functional outcome of mega endo-prosthetic replacement over the past decade. A previous study was carried out by us in 2012, which has been the only work on mega-prosthetic replacement in Pakistan to this date.5

A retrospective study was conducted in the Aga Khan University Hospital, department. of Orthopaedics after ERC approval. All the patients diagnosed with malignant, benign and metastatic bone tumours were included. All paediatric and adult age group patients were considered eligible for inclusion in the study.  The medical records of patients from January 2008 to January 2018 were reviewed and the follow-up was taken till October 2018. There were 58 patients who were included in study. For assessing functional outcomes in treated patients, Musculoskeletal Tumour Society (MSTS) scoring system was used. This system assigns numerical values (0-5) for each of six categories: pain, and function and emotional acceptance in the upper and lower extremities; supports, and walking and gait in the lower extremity; and hand positioning, and dexterity and lifting ability in the upper extremity.6 These values were added, and the functional score was presented as a percentage of the maximum possible score. The results were graded according to the following scale: excellent 75-100%; good 70-74%; moderate 60-69%; fair 50-59 %; and poor 50 % based on our previous study.2 Post-surgery complications and patient's status either with local disease or metastatic disease were noted. Data was analyzed on statistical software SPSS version 22. Frequencies and descriptive statistic were calculated for categorical quantitative variables respectively. Chi2- Test was run for analyzing associations among variables and P-value < 0.05 was considered as significant for finding associations among variables. Kaplan-Meier test was used for calculating survival status of patients.

Regarding oncological outcome, margins were negative in all primary bone tumours. Two patients had local recurrence while 7 had distant metastasis. Four patients were lost to follow up, however, they remained disease free till their last documented follow up.

MSTS functional score was assessed in 34 patients, which gave a mean score of 72.09±26.43 (Range 27-100). Excellent outcome was achieved in 18, good outcome in 6, fair in 5 while poor outcome was reported in 6 cases. There was an inverse relationship between age and MSTS score which was significant with p<0.01. No significant difference was found in the functional score of hip and knee surgery patients or secondary to difference in gender. 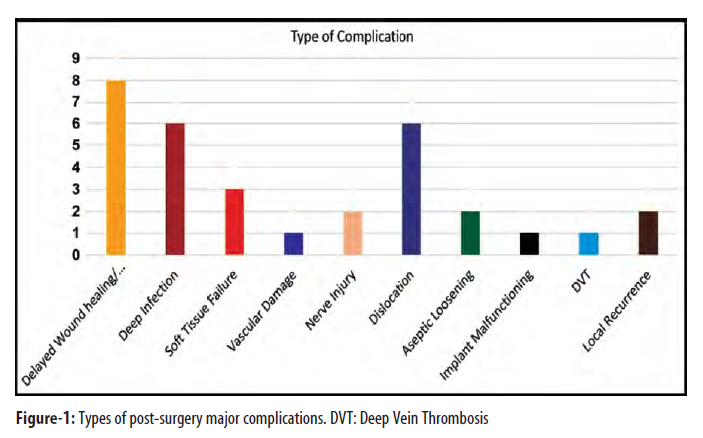 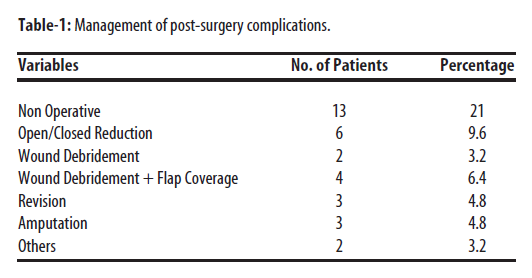 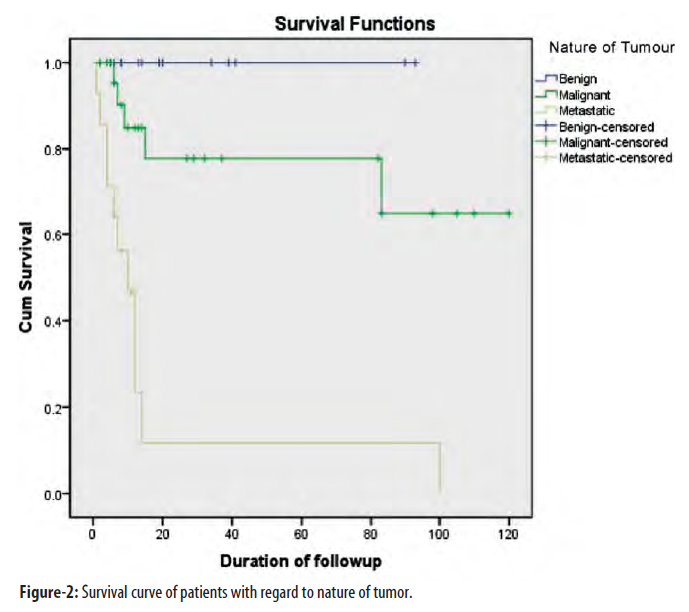 The mean MSTS score was 72.09% and 52% patients had some complications in the presented study. A major complication was seen in 31% patients requiring a second invasive intervention or lead to a change in functional status. These included wound dehiscence, deep tissue infection, major neurovascular damage, aseptic loosening or dislocation. Minor complications as delayed wound healing, cellulitis and superficial infection requiring antibiotics therapy was encountered in 21% patients.  Our mean functional score was comparable to our previous study.2 However, it remained lower than Tan et al. and Tunn et al. which were 78% and 77% respectively.7,8

Custom built prosthesis were introduced in 1949 initially by Stanmore, however, they gained popularity in 1970s because of the advent of neo-adjuvant chemotherapy and advancements in diagnostic modalities. Over the next decade, introduction of modular prosthesis ensured not only the easy availability and cheaper cost but also more flexibility during resection.7 Moreover, though these implants have been introduced primarily for oncological indications but they have also been of paramount utilization in the event of revision surgeries with large osseous defects, aseptic loosening, peri-prosthetic fractures and pseudo-arthrosis.9

These custom prosthesis used to replace the femur, the hip joint, part of the pelvis, the knee joint, the humerus and shoulder joint, and parts of the ulna and radius which are the most common predilection sites of primary bone tumours.10 In addition to these, custom and modular implants have also been involved in management of metastatic bone disease particularly in the setting of a pathological fracture and wherever the intent is palliative.11,12 The most usual site, in case of metastatic disease, has been proximal femur.12

Mega-prosthetic reconstruction has many advantages. The load-bearing characteristics of prosthetic reconstruction surgery offer immediate postoperative stability and facilitate rapid rehabilitation. However, appropriate patient selection is paramount to obtain better and more consistent results. The involvement of major structures is considered an important factor in determination of limb salvage vs amputation. The decision is to be made once patients are re-evaluated after the neo-adjuvant treatment, through which, some patients who are not candidates of limb salvage initially, may experience shrinkage in tumour size and thus increase in chances of limb salvage. Another patient group is the one with poor prognostic factors like metastasis on presentation, bone metastatic disease and ineffective response to chemotherapy. Mega endo-prosthetic reconstruction is a viable option in such patients to improve quality of life when compared to debilitating radical management, wherever there is a limited life expectancy.13

Endo-prosthetic reconstruction has now comparable results with amputation regarding oncological outcome and long-term survival but also with better functional outcome in terms of Musculoskeletal Tumour Society (MSTS) score. Since, bone sarcomas are the fourth most common cancer in individuals under the age of 25, this demands longevity of the reconstructions. Furthermore, cancer patients are more prone to complications, due to the impaired immune system, longer surgery time, and greater loss of tissue and structures.14 These mega-prosthesis also have worse long-term results compared to conventional total joint replacements.15

Nevertheless, all of these studies were based on primary bone tumours while our work also incorporated the cases of metastatic bone disease. In terms of functional outcomes, deep infection and concomitant pathology e.g., advanced osteoarthritis or AVN of ipsilateral joints also has an influence.15,16 Comparison with other studies in literature is displayed in Table-2.

On comparison with other studies17-19 with the rates of 4% to 30%, 9.6% of our patients showed peri-prosthetic infection which is one of the most common complication after mega endo-prosthesis apart from local recurrence (Figure-3A). 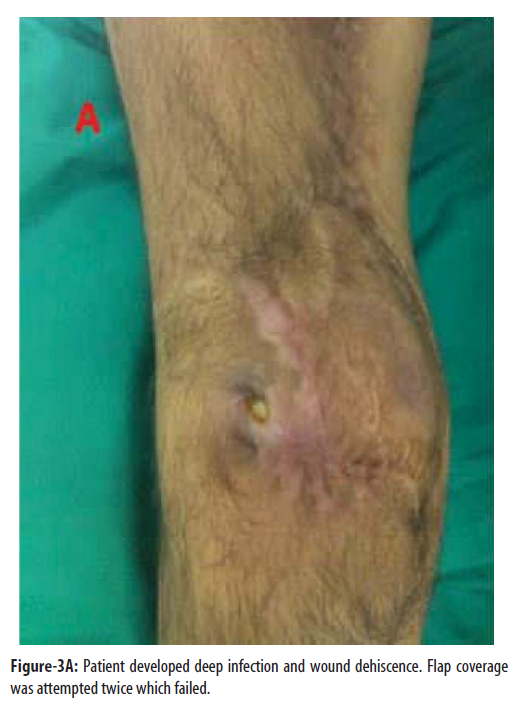 This is attributed to various risk factors like tumour disease, chemotherapy-induced immunosuppression, poor soft tissue situation due to radiation therapy, long operation time and inadequacy of coverage.20 One patient with metastatic renal carcinoma underwent tumour debulking and proximal femur replacement while four with primary malignant bone tumours received neo-adjuvant as well as adjuvant chemotherapy. Another case was that of a 14 year old girl with Ewing's Sarcoma who developed peri-prosthetic infection after 5 years of index surgery, though in literature, majority of the cases present within first two years.20 No significant difference was found in the infection rate between hip and knee surgeries. Recent studies have shown the promising results of silver coated mega-endoprosthesis in terms of decreased infection rate, however, no long-term level 1 data is available yet. Moreover, cost and availability have also been major deterrents of those implants in our setting.21,22

Three amputations had been observed in our study in which 2 of them had infection and patients underwent multiple wound debridement and coverage. In the third case, however, there was recurrence after undergoing intramedullary nailing of the pathological fracture of femur secondary to a Leiomyosarcoma, which was found out on subsequent biopsy. Our overall limb salvage rate was 95%.

Among the patients who required revision surgery, we performed revision of femoral components only. Both remained disease free, however, one of them developed coronal instability after 10 years of initial surgery (Figure-3B). 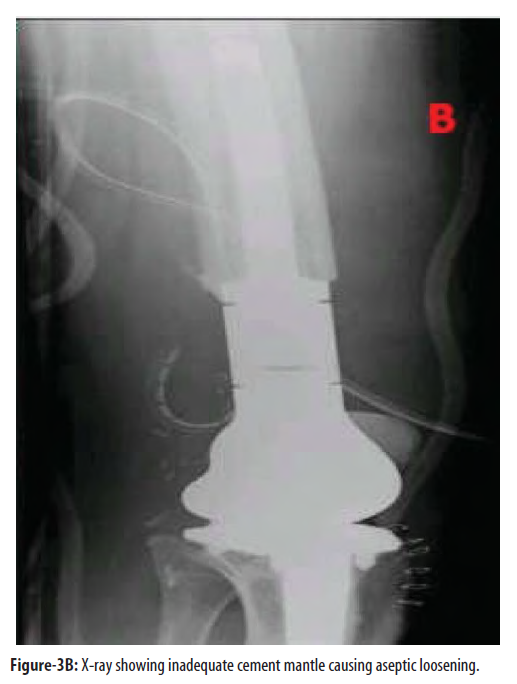 One of the rare complications and cause of revision is failure of hinge mechanism, which was also experienced by one of our patients. He eventually developed knee dislocation. Polyethylene (PE) bushing failure had been the likely mechanism in our case, which is also reported as one of the reasons of this type of failure.23

Our recurrence rate in primary malignancies remained 9% which is comparable with literature. Both Ham et al. and Malawer et al. reported 6% rate of local recurrence.6,24

Overall survival rate of our patients was 67.8%, whereas, mean survival time was 76±8.55 months. These were primarily patients with metastatic bone disease. Among those with primary malignant bone tumours, survival rate had been 80%.

Mega-endoprosthetic reconstruction is a good option, in terms of functional outcome, for limb salvage after bone tumour resection, with an acceptable rate of complications. However, cost has been a major deterrent. Patient selection and rehabilitation is of paramount importance for a good outcome.

There were numerous limitations in our study. Most important one was the small sample size despite a long span of 10 years. This is because of the financial limitations of our patient group. Secondly, we used prosthesis from different providers, which may have a bearing upon mechanical complications and long-term survival of the implants. However, it had no bearing upon resection plan and margins. Moreover, the follow up is too short in some cases to have any implications upon recurrence rate, functional score and particularly survival.

Future refinements in technique and technology would certainly improve the outcome and minimize the complications associated with limb salvage.