Results: The mean age of patients undergoing UTKA was 61±11 years and those undergoing BTKA was 64±8 years, with similar male to female ratio (1:1.8) in both groups. Males undergoing BTKA were significantly older than other patients (71±6 years). Primary osteoarthritis was the most common initial diagnosis (59% in UTKA and 89% in BTKA, p<0.05) followed by rheumatoid arthritis. Average blood loss per knee was higher in BTKA procedures but difference did not reach statistical significance. Blood transfusion requirements in BTKA patients not receiving antifibrinolytic agent were significantly higher than in similar UTKA patients (75% vs 17%, p<0.05) but were significantly reduced with peri-operative administration of antifibrolytic therapy (30% BTKA, p<0.05). Complication rates, low in both, were more frequent in BTKA patients with co-morbidities.

Total Knee Arthroplasty (TKA) was first performed in 1968. It has evolved to be one of most frequently done orthopaedic surgery performed in the west in the present era.  More than 600,000 procedures are reported in America annually.1 It has consistently been reported to be a successful means of relieving pain and restoring function in end stage arthritis: Also implant survival after TKA is reported to be 92-98 % at 15 years.2

Compared to the west, knee arthroplasty is still in its infancy in Pakistan. The Pakistan National Joint Registry reported 761 knee arthroplasties for the year 2014. This figure in reality is short of actual procedures being done, as not all cases are being registered.

Patients with end stage arthritis of knees present with symptoms that often require bilateral TKA. Such patients are offered either a "staged bilateral TKA" i.e. 2 separate unilateral TKAs (UTKA) within one year; or a "simultaneous bilateral total knee arthroplasty (BTKA)" i.e. arthroplasty of both knees are performed under one anaesthetic session on the same day. Performing simultaneous BTKA has its advantages such as a single anaesthetic session, reduced cost, better rehabilitation in severely deformed bilateral joints and early recovery time.3 Controversies still exist about the safety of this procedure.

The current study compared the pre-operative patient characteristics, underlying pathology, peri-operative blood loss, transfusion requirements and in hospital complications in simultaneous BTKA patients versus unilateral or staged bilateral arthroplasty [UTKA] patients. To our knowledge this is the first prospective comparative study from Pakistan focusing on this issue.

Patient's demographics, routine investigations, echocardiography and anaesthesia evaluation were carried out prior to surgery.

About half the patients were randomly selected to receive the antifibrolytic agent tranexamic acid [16/39 in UTKA and 20/36 in BTKA group] administered parentally in two doses in the perioperative period.

Surgery was carried under spinal or combined spinal and epidural anaesthesia in all patients. They were operated by two arthroplasty surgeons [SH and MSA] using cemented implants from DePuy or Zimmer and similar operative technique in both groups. UTKA, either primary or as part of staged bilateral procedure, was performed in 39 patients and 36 patients underwent simultaneous BTKA.

During the hospital stay cardiovascular, neurological, thromboembolic and wound complications were noted. In case of suspicion of pulmonary embolism, CT pulmonary angiography (CTPA) was performed to confirm the diagnoses.

Statistical analysis: Sample size was calculated by keeping the level of significance at 5%. the power of test = 95%. Pooled standard deviation = 89%. Test value of the population mean= 3.3. Anticipated population mean = 2.3. Sample size (n) = approximately 35 patients in each group. After checking the data for normality. Student's t test was applied to determine the differences in the age, blood loss and number of transfused units between the groups using SPSS version 23.0. Other parameters such as number of patients with various pathologies in the two groups, the number of patients who were given blood transfusion and those with complications were assessed by the chi square test using www.socscistatistics.com. Level of significance was set at p<0.05 for all calculations.

The 75 patients included in the study underwent 110 primary total knee replacements. Of these 39(52%) had unilateral or staged knee arthroplasty UTKA while 36(48%) had simultaneous BTKA (Table-1). 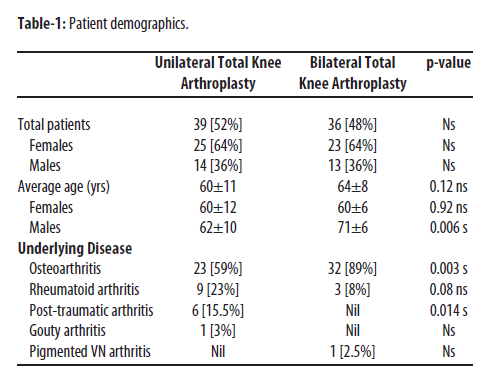 In both UTKA and BTKA groups male to female ratios were similar (1: 1.8) as were the mean ages of the patients. However the mean age of males in BTKA group was 71±6 years (range 59-79) and females was 60±6 years (45-74) and this difference in male and female ages was significant (p <0.05). There was also statistically significant difference in the mean age of male patients undergoing Bilateral knee replacement and Unilateral knee replacement (Table-1).

The distribution of underlying joint pathology in the two groups is given in Table-1. Primary osteoarthritis was seen to be the commonest underlying pathology in both groups. However its incidence was much higher in patients undergoing BTKA 32(89%), than in those requiring UTKA 23(59%) and this difference is statistically significant. It was followed by rheumatoid arthritis but the difference between two groups was not significant. Post traumatic and gouty arthritis required unilateral intervention.

Average blood loss per knee although higher in BTKA, was not statistically different between UTKA and BTKA patients undergoing similar protocols (Table-2).

However difference in total operative losses of two knees versus one knee was obviously much larger. Thus in patients who did not receive antifibrinolytic medication BTKA was associated with a significantly higher proportion of patients requiring blood transfusion than UTKA (75% vs. 17%, p<0.05). Among those transfused, the numbers of units per transfused patient in BTKA and UTKA groups were similar (Table-2).

In BTKA, patients who were administered tranexamic acid, the proportion of patients requiring transfusion were significantly reduced in relation to those who were not administered this medication (p<0.05). Also, the difference between the segment of patients requiring transfusion in UTKA and BTKA was no longer significant when tranexamic acid was administered. Among those transfused the number of units required in BTKA and UTKA groups was similar.

In our series of seventy-five patients, 4 patients (1 male, 3 females) developed complications during their hospital stay. These were the patients in the older age group (61, 62, 65 and 75 years of age), having pre-existing co- morbidities (ASA grade 2 or 3). Pulmonary complications in the two groups were comparable. There was one case of pulmonary embolism, confirmed on CTPA, in each group. They were treated medically and had a complete recovery. Cardiac complications occurred in two patients of BTKA. A male patient, 75 year of age, in ASA grade-III, developed ventricular fibrillation post operatively. He expired on 5th postoperative day due to myocardial infarction. Another female, 62 years of age, in ASA grade-II, had a cardiac arrest in the recovery bay, half an hour after surgery. She, however, recovered completely after resuscitation.

When comparing the demographic data of patients in our study, unilateral or bilateral TKA, females outnumbered males, with female to male ratio being similar in both groups i.e. 1.8:1. The presence of gender difference in osteoarthritis knees, higher female risk is well documented in the meta-analysis done by Srikanth.4 The Framingham knee OA study found incident knee osteoarthritis to be 1.7 times higher in women than in men,5, very similar to our patient distribution.

Although the average age of patients in both groups was around 60 years, interestingly a difference of 10 years was observed in the mean age of male patients (mean 71 years, range 59-79) undergoing BTKA as compared to all other patients, male or female, and this is statistically significant (Table-1). Primary osteoarthritis of knees was the leading underlying cause for arthroplasty in both groups, accounting for nearly 90% of BKTA patients. From this data it can be inferred that end stage primary osteoarthritis is more likely to manifest in older age in males as compared to females. A recent study from Spain has also found that incidence rates increased continuously in males peaking only in oldest ages >85 years.6

Controversy exists regarding amount of blood loss in the UTKA and BTKA procedures. While few papers have stated that blood loss per knee is almost equal in the two groups; most showed significantly more blood loss and higher transfusion requirement with simultaneous procedures. This is perhaps because of greater stress placed on the coagulation cascade with simultaneous procedures.7 In our study we found the average blood loss per knee was higher in BTKA than in UTKA procedures although the difference did not reach statistical significance. However total operative losses in BTKA patients necessitated blood transfusions in significantly greater proportion of patients as compared to UTKA (75% of BTKA and 19% of UKTA patients, Table-2). The blood loss and transfusion requirements in both groups were significantly reduced by use of tranexamic acid (an antifibrinolytic agent). It should be used as a safe adjunct to prevent blood loss and transfusions.8

Many of the recent studies have shown the safety of simultaneous BTKA when comparing it with unilateral or staged procedures.3,9-11 Some studies still question the safety of BTKA and reveal that it is associated with significantly larger number of in hospital complications as compared to UTKA.1,12-14 A metanalysis, comparing over 4 million hospital discharges of unilateral, bilateral, and revision TKA procedures, over a 14-year period, found that bilateral TKA had higher complication and mortality rates than either unilateral or revision TKA.15 In our small series the frequency of hospital complications was quite low but more frequent in BTKA patients (8.3% vs 2.6%), but there was no statistically significant difference between the two groups (Table-2).

It has been documented that tourniquet deflation is associated with release of accumulated metabolic wastes from the ischaemic limb into arterial blood. This may lead to enhanced minute ventilation and rarely arrhythmias.21 Trans-oesophageal echocardiography has shown a phenomenon called snow storm like echogenic particles for several minutes after the deflation of tourniquet which may lead to adverse events.22 Old age patients and females are more prone to tourniquet related complications. Patients in ASA-2 or ASA-3 have higher odds of tourniquet related complications.23 We have also observed signs of thromboembolism just after release of tourniquet in 3 patients who underwent simultaneous bilateral knee replacements. We consider that patients undergoing simultaneous bilateral knee replacement should be kept under close observation in the recovery in the initial one hour after deflation of tourniquet, followed by HDU/ICU care for next 24 hours.

Preoperative thorough evaluation of the patient by the surgeon and the anaesthetist is of utmost importance before embarking on this voyage. Jain et al published a study in which all their simultaneous bilateral TKA candidates underwent dobutamine stress echocardiography for detection of any silent cardiac co-morbidity by a cardiologist. TKA was deferred in those with positive results. In their series of 150 simultaneous procedures none of the patients suffered any cardiac or pulmonary complication postoperatively.3

Looking at the financial aspects, simultaneous bilateral knee replacements can reduce hospital charges by 18 to 50% compared with staged procedures.3,9 This is due to overall decrease in operative time and total duration of hospital stay.

We believe that elderly patients with co morbidities (ASA-2 or above) are at higher risk for complications in simultaneous bilateral knee replacement. Adding to it, the significant blood loss, puts these patients, with already low physiological reserves, under tremendous stress. The risks associated with staged and simultaneous approaches should be clearly taught to the patient and his attendants, before deciding about the procedure. Simultaneous BTKA procedures should preferably be carried out by high volume surgeons in high volume hospitals with backup facilities like ICU and HDU.

The strength of the study is that it is prospective, focusing sharply on ongoing blood loss, transfusions and complications rather than relying on recorded data as in retrospective studies. The relatively smaller number of patients is its weakness.