Objective: Tibial plateau is an important weight bearing surface and its fractures are the result of axial compressive forces. Post-traumatic osteoarthritis (PTOA) occurs despite anatomical joint reconstruction. In this study we determined the incidence of PTOA after primary management of tibial plateau fractures and determined the risk factors of PTOA of patients whose results were published at 24 months and now we present a five year follow up of the same patients.

Methods: In this study, we presented the prospective data of 109 patients who were managed for tibial plateau fractures, from August 2009 to June 2018 a Jinnah postgraduate medical centre. Data of patients regarding clinical and radiological, functional outcome (according to the American Knee Society criteria), post-procedural visual analogue scale (VAS) pain score was included. Incidence of development of PTOA was noted in each patient using the Ahlbäck classification.

Conclusion: There is a high proportion of osteoarthritis following tibial plateau fixation. The risk factors that related to the development of secondary arthritis our cohorts were increased age, male gender, a decrease in AKSS and a higher VAS group. Knee arthroplasty is the only option for our cohorts with severe posttraumatic arthritis.

Bicondylar fractures of the proximal tibia (Schatzker V and VI) occur as a result of axial loading together with varus/valgus applied forces, which leads to articular depression and malalignment.1,2 In the absence of a unified treatment protocol for tibial plateau fractures, these fractures represent with a broad spectrum of severity ranging from simple injuries with predictably excellent outcome after nonoperative treatment to complex fracture patterns that challenges even most experienced surgeons.3-5 Moreover, surgical management of these high-velocity fractures can be demanding and are prone to intra operative challenges of maintaining reduction, alignment and stability.6

As the knee is a weight-bearing joint, the anatomical reduction is pivotal for the restoration of the mechanical axis. Therefore, the presence of residual incongruity could lead to joint stiffness and is a known contributing risk factor for posttraumatic osteoarthritis (PTOA).7,8

There is variable evidence of secondary arthritis present in the literature, around 25% to 45% of patients with fractures of the tibial plateau having a radiological evidence of PTOA at long term follow up.1,5,9-12

The development of arthritis is related to the following factors; increased age (increased chances of osteoporosis), the complexity of the fracture, lower limb malalignment, mechanics of fracture, early range of motion for cartilage nourishment and preservation have a significant impact on the overall prognosis and development of osteoarthritis.1,11,12

Osteoarthritis leads to pain, swelling, stiffness, muscle weakness and joint instability, all of which can result in impairment of physical function, a decline of life quality and may have significant socio-economic influence. Total knee replacement (TKR) remains the only viable option in severe cases of secondary arthritis of the knee. TKR allows a painless joint, restoration of the alignment and provides mobility to the patient.

Since there are no studies published at national level that describe the incidence of PTOA following tibial plateau fractures, the primary aims of this study were to assess the functional outcome in terms of the American knee society score (AKSS) and Visual Analogue Scale (VAS) and to evaluate the frequency of PTOA after surgical management of proximal tibia fractures after a minimum of five years follow up. While the secondary aim was to assess the frequency of patients undergoing TKR secondary to PTOA following plateau fractures.

Following the permission of ethics review committee of the hospital, a prospective study was conducted in the Department of Trauma & Orthopaedic Surgery, Jinnah Postgraduate Medical Centre, Karachi from August 2009 to June 2018.

Inpatient records of all patients 18 years and above treated for Schatzker type V and VI managed by two different modalities dual plating and Ilizarov between 2009 and 2014 were traced from the medical record department and included in the study. Patients with pathological fractures, floating knee, severe head injury, polytrauma and significant comorbidities like congestive heart failure, hypertension, chronic liver disease, stroke or obstructive lung disease were excluded from the study. Also, patients having a follow-up of fewer than five years were excluded from the study protocol (Figure-1).13 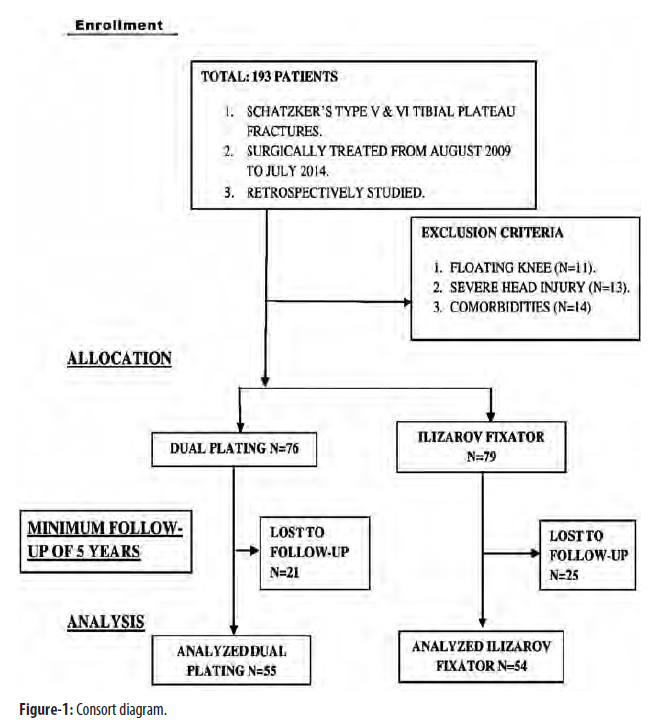 After finding the records of bicondylar tibial plateau fractures that were operated between august 2009 and June 2014 patients were contacted and 109/137 came to fracture clinic and their patient reported outcomes were recorded.

Preoperative data, including demographic data, mode of injury, the time lag between injury and primary surgery and fracture classification, according to Schatzker, was collected. Radiographic findings, including the fracture pattern, displacement of fragments, and depression of fragments were also noted. Preoperative computed tomography (CT) scan findings, intraoperative findings, and data regarding the course in the hospital were collected from the inpatient records.

Data were analysed using SPSS Version 20. Mean, and the standard deviation was calculated for quantitative data. Frequency and percentages were calculated for qualitative variables. Univariate/multivariate analysis was performed to determine the baseline and surgical risk factors of PTOA after primary treatment and odds ratio was calculated. Level of significance was taken as 0.05. 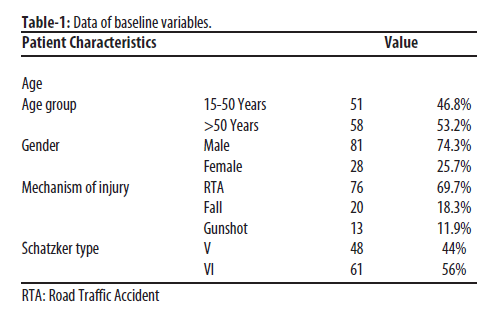 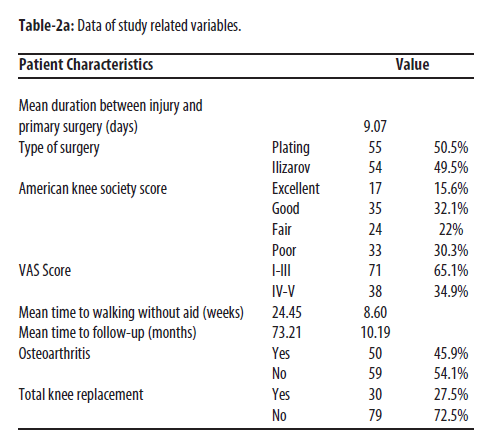 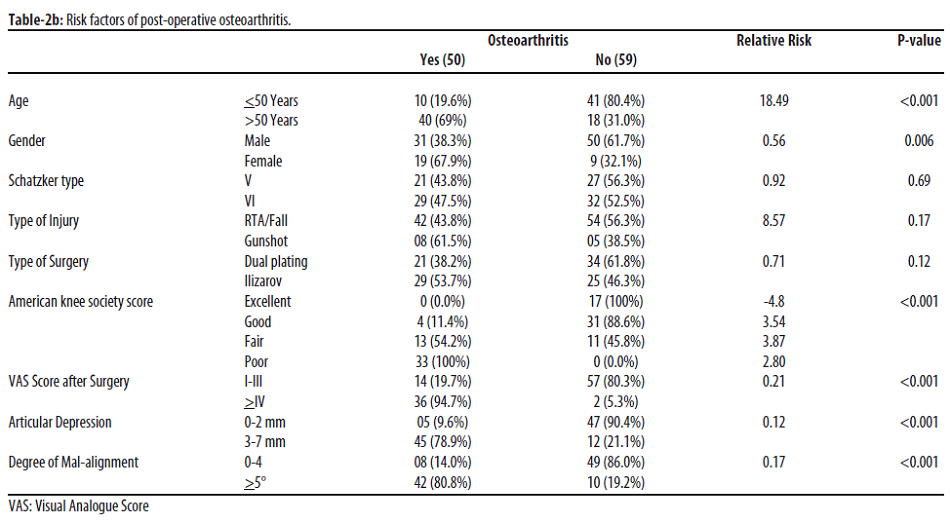 In this study we present the five year follow up results of our previously published results of tibial plateau fractures at 24 months. There was a high proportion of patients (45.9%) that developed osteoarthritis following the surgical management of tibial plateau fractures in our study which coincided with the works of Honkonen et al. who reported a 44% incidence of secondary arthritis of the knee.1 Likewise, Rademakers et al. reported a 27% incidence of arthritis with symptomatic degeneration in cases with malalignment of more than 5 degrees over 14 years, whereas Manidakis et al. reported osteoarthritis in 26.40% patients in his series of 125 patients over 20 months respectively.9,11 Another large study with follow up of 14 years by Volpin et al. reported the incidence of secondary arthritis to be 23% which developed within 6-8 years of follow up in patients with tibial plateau fractures.12

Our results are comparable with other published studies such as Volpin et al. and Honkonen et al1,12. who observed PTOA within 6-8 years. Mehin et al. reported endstage arthritis with a mean delay of 4 years following treatment of the initial injury.10 However, our results are only for bicondylar fractures of the proximal tibia, whereas the previous studies have included all Schatzker fractures ranging from I to VI, respectively. These studies have emphasized the fact that metaphyseal fractures of the proximal tibia are hard to reduce, align and stabilise. In addition, the pattern of injury, range of motion and cartilage nourishment influence the development of osteoarthritis.14

Age and gender had an impact on the development of osteoarthritis in our cohorts with the maximum incidence of PTOA observed in the age group > 50 (p=0.01). Stevens et al. pointed out that the age of the patient was strongly related to the development of secondary arthritis following the injury of the proximal tibia.5 Likewise, Parkkinen et al. noticed that older patients had more advanced secondary osteoarthritis and unsatisfactory functional outcome at follow-up when compared with younger patients.15 Honkonen et al. observed that patients under 50 years at the time of tibial plateau fractures had signs of PTOA only in the injured knee, whereas patients above 50 years had findings of secondary osteoarthritis in both the injured and the uninjured knee.1

Majority of patients 74.3% were males attributed to our social values that men work outdoor. These findings are in keeping with another Indian study done by Jagdev et al. who reported an incidence of PTOA in 73.3% of the population with a mean age of 41.28 years with male domination of 51 out of 60 cases (85%) relating to our society's norms.16

Several scoring systems have been used to evaluate the functional outcome of tibial plateau fractures. We assessed the outcome using the American Knee Society functional score having scores between 0 and 100, with a higher number indicating good prognosis. Our study showed a strong correlation with the functional outcome of the patient (AKSS and VAS) and the development of secondary arthritis (p-value 0.00, CI 95%).

We found that VAS score >4 is a significant predictor of PTOA in the follow-up period. Manidakis et al. also reported a similar outcome.9 This can be valuable in informing patients about the outcome that can be expected.

Our results are not immune to any shortcomings that the study was retrospective with a 24 month outcomes with a prospective follow up to a minimum five years per patient, with different reported patient reported outcomes instruments utilized in both studies, and conducted at a single centre. On the other hand, the strengths of this study are a long follow up period and being conducted at an urban level 1 trauma centre. Furthermore, to our knowledge this is the first study from Pakistan that gives an insight on the midterm results of surgically operated tibial plateau fractures.

There is a high proportion of osteoarthritis following tibial plateau fixation. The risk factors that related to the development of secondary arthritis in our cohorts were increased age, male gender, a decrease in AKSS and a higher VAS group. Knee arthroplasty is the only option for our cohorts with severe posttraumatic arthritis.

Acknowledgements: The authors would like to thank Alexander Swenson for making the graphical abstract which was presented as an e-poster at the 40th SICOT World Congress in Muscat 2019 held between 4-7 December 2019.

Disclosure of Funding: This project was not funded by any organization, and the authors received no financial support for the research, authorship, and/or publication of this article.

Conflict of Interest: The authors declared no potential conflicts of interest with respect to the research, authorship, and/or publication of this article.

Ethical Committee Approval: The study was approved by the Institutional Review Board Committee of Jinnah Postgraduate Medical Centre, Karachi, Pakistan with the IRB number of NO.F.2-81/ GENL-2019/ 18270/ JPMC.