Methods: A cross-sectional study was conducted at the Section of Orthopaedics, Department of Surgery, Aga Khan University Hospital, Karachi from 1st January 2019 till 30th June 2019. All patients between the ages of 15 to 80 years who underwent IM nailing for femur shaft fractures were included. Angulation was measured on immediate post-operative X-ray films and an angle of ≥5° on AP and/or lateral views was defined as malalignment.

Results: A total of 65 patients were enrolled in the study with a mean age of 39.9 ± 16.5 years. Majority of the patients,49 (75.4) were males and road traffic accidents were found to be the most common mechanism of injury. Malalignment after surgery was encountered in 6(9.2%) patients. Proximal femur fractures were noted to be significantly associated with malalignment with a p-value of 0.014.

Conclusion: This shows that frequency rate of malalignment after IM nail for femoral shaft fractures in a developing country like Pakistan is comparable to internationally reported literature and proximal femur fracture is a risk factor for malalignment.

Femur bone has always been a source of fascination for orthopaedic surgeons and femoral shaft fractures are one of the most commonly encountered fractures in orthopaedic surgery.1 In healthy individuals, femur fracture usually occurs as a result of high velocity trauma and is often associated with multiple complex injuries resulting in a life threatening injury pattern.1

As femur is an important load bearing bone, its fractures can lead to significant disability and morbidity, unless appropriate treatment is received in time.2,3 Some of the factors influencing the choice of treatment include age of the patient, location and type of fracture, degree of comminution and socio-economic status of the patient.2

Although multiple implants are available for management of femoral shaft fractures, interlocking intramedullary (IM) nail is currently considered the gold standard for treatment.1,4 Few of the major advantages of IM nail include high union rates and early mobilization of the limb.5 Though complication rates after IM nailing of femur are low, there are still certain pitfalls. Malalignment is one of the complications reported in literature which can lead to non-union and may result in a need for re-do surgery with reconstruction.6

Hence the objective of this study was to determine the frequency of angular malalignment of femur in patients undergoing IM nailing for femur shaft fracture by measuring axis on immediate postoperative plain radiographs.

A cross-sectional study was conducted at the Section of Orthopaedics, Department of Surgery, Aga Khan University Hospital, Karachi, from 1st January 2019 till 30th June 2019. All patients between the ages of 15 to 80 years who underwent IM nailing for femur shaft fractures were included in the study. Patients with any known metabolic bone diseases, who underwent IM nailing for deformities other than femur shaft fracture, or who were treated with flexible nails were excluded. Approval was obtained from the ethical review committee of the institution.

Informed consent was taken from all included patients and baseline characteristics were recorded including demographic details (age and gender), name, mechanism of injury, fracture site and side, type of nailing technique (antegrade/retrograde) and degree of angulation. Angulation was measured through a standardized computer software on immediate post-operative X-ray films using antero-posterior and lateral views. The angle measured was at the point of intersection of two lines drawn from anatomical axis of proximal and distal segments of femur respectively. Malalignment was defined as presence of greater than 5° varus/valgus angulation on antero-posterior radiograph and/or presence of greater than 5° flexion/extension on lateral radiograph.7 All surgeries were performed by experienced orthopaedic surgeons with at least 5 years of experience and same type of prosthesis was used for all procedures. Sample size was calculated by using WHO Sample size calculator.8 Confidence level (1-a %) was taken as 95%, with precision (d) of 0.07 and taking the frequency of mal-alignment from literature as 9%. Considering the frequency of femur fracture presented to our institute, the largest sample size that was calculated for the frequency of malalignment was 65.

Data was analysed using SPSS version 21. All quantitative variables are represented as mean ± standard deviation while all qualitative variables are expressed in terms of percentages. Data was checked for normality using Shapiro-Wilk test. Chi-square and Independent sample T-tests were used where appropriate and p-value of <0.05 was taken as significant.

A total of 65 patients were enrolled in the study with the mean age being 39.9 ± 16.5 years. Majority, 49 (75.4) of the patients were males and road traffic accidents were found to be the most common mechanism of injury as shown in Table-1. 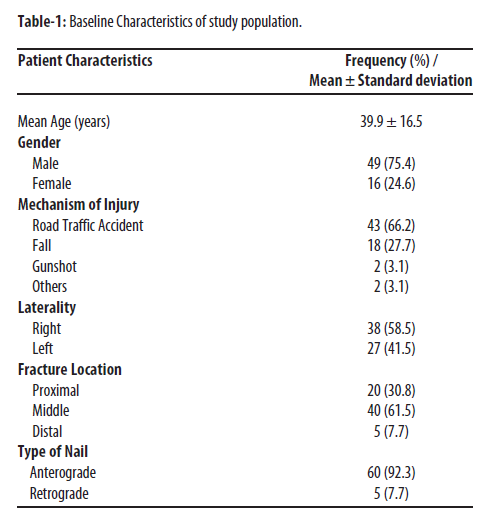 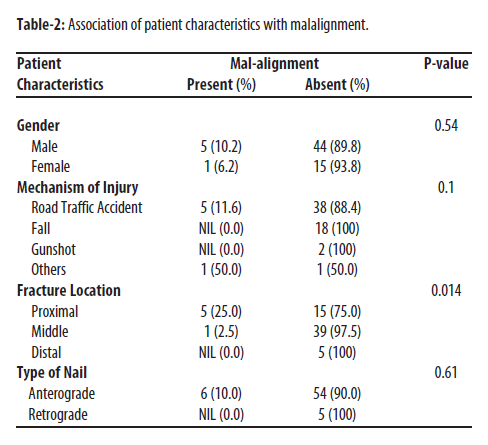 Proximal femur fractures were noted to be significantly associated with malalignment with a p-value of 0.014.

The incidence of femoral shaft fractures is reported to vary between 10-21 per 100,000 persons/year and therefore is of great significance in orthopaedic practice.9 Timely management of this fracture is necessary to avoid considerable morbidity and disability, hence multiple treatment modalities have been used for internal fixation of femur fractures.2,3 With advancement in technology, femur IM nail has evolved as the gold standard for treatment of femur shaft fractures irrespective of their location (proximal, middle or distal).4 Various advantages of IM nailing of femur include short hospital stay, early functional mobilization of limb and high union rates.10

Despite multiple advantages, femur IM nail also has some associated complications. Malalignment of femur after treatment with IM nail is one of the most feared complications which may result in non-union and need for second surgery.6 Presence of mal-rotation after fixation and limitation in functional outcomes and quality of life have also been reported in international literature and are an area of concern for orthopaedic surgeons.5,9,11

Malalignment after IM nailing has been described as either rotational or angular.11 Rotational malalignment has been defined as presence of >15° of rotation either internally or externally. Numerous studies have evaluated its significance and its incidence has shown to vary from 22 to 52% in international literature.11-14 However, there are very few studies evaluating angular malalignment which has been defined as >5° of varus or valgus deformity after fixation.7

A study conducted in Malaysia in 2017 with a sample size of 179 patients showed a frequency rate of 2.8% for angular malalignment after IM nail for femoral shaft fractures. All patients were noted to have proximal shaft fractures although this finding was not found to be statistically significant.3 Similarly, in another study, William MR et.al noted an angular malalignment rate of 9% after IM nail for femur shaft fractures. They also found a significant association between unstable fracture pattern in addition to distal and proximal fracture location with malalignment.7 In contrast, Wilson NM et. al conducted a study in 2019 to compare post-operative alignment in femoral shaft fractures after fixation with retrograde standard Surgical Implant Generation Network (SIGN) nail vs fixation with retrograde Fin nail. They reported no case of malalignment in both groups.15

The current study also shows a frequency of 9.2% for angular malalignment after femoral IM nail which is comparable to previously reported literature.7 A slightly increased rate can be attributed to the fact that this study was conducted in a developing country with limited resources and lack of awareness amongst general population. As a result, most patients tend to present late which makes intra-operative reduction and appropriate alignment even more challenging.

The results of the current study are comparable to internationally reported literature and therefore show that IM nail can be successfully used in developing countries for femoral shaft fractures.7 However, there is still considerable lack of literature on complications associated with IM nail specially from developing countries like Pakistan. In addition, post-operative malalignment is an important complication which can lead to non-union but there is very little international literature available on its incidence and risk factors. Hence, there is need to conduct large multi-centre studies from the developing world to evaluate its incidence and add on to internationally available literature.

The current study shows that incidence rate of malalignment after IM nail for femoral shaft fractures in a developing country like Pakistan is comparable to internationally reported literature and proximal femur fracture is a risk factor for malalignment.