Methods: This study was conducted in December 2020. A probabilistic model was used to estimate the probability of HIV-1 transmission from different key HIV population groups in Larkana. Our model was run on three probabilistic assumptions: 1) each replication gave two conceivable results: 'true' or 'false'; 2) the chance of giving a 'true' result is the same for each replication; and 3) the replications are independent - 'true' in one will not impact the likelihood of 'true' in another.

Conclusion: Our results suggest that there is a high likelihood of HIV transmission by key population groups in Larkana, such as MSM, TG, and PWID. Mathematic models, such as one proposed in our study can aid the HIV and acquired immunodeficiency syndrome (AIDS) control programmes in evaluating and optimising the strategies in controlling transmission of HIV from the key population groups.

Human Immunodeficiency Virus 1 (HIV-1) remains a major public health challenge worldwide.1 Globally, the number of new HIV cases has significantly decreased, due to an increase in usage of antiretroviral therapy (ART), and public health efforts to mitigate HIV transmission, such as needle-exchange programmes and 100% condom use per sex (CUPS), has resulted in a significant decrease in new HIV cases worldwide. For example, between 2000 and 2018, new HIV infections and HIV-related deaths decreased by 37% and 45%, respectively.2

In countries such as Pakistan, the number of new HIV-1 cases have proportionally increased over the past decade, with a nearly 57% increase in the number of new infections between 2010 and 2017.2 There have been eight documented HIV outbreaks in the past two decades. Four out of eight previous outbreaks occurred in the Larkana district, suggesting that Larkana is an epicentre for HIV transmission in Sindh. In Larkana, the key HIV population groups include: people who inject drugs (PWID) accounting for 38% of currently registered HIV-positive cases; male sex workers (MSM) and female sex workers (FSW), the incidence of HIV among whom have projected to rise from 18.9% in 2015 to 24.3% in 2020 (among MSM) and from 3.2% in 2015 to 6.3% in 2020 (among FSW); and finally transgender (TG) or hijra sex workers (HSW) in whom the HIV prevalence is around 27.6%.3-5 More recently Larkana witnessed another HIV outbreak in April 2019; more than 900 individuals, mostly children, have been identified as HIV-positive, making this outbreak the largest HIV outbreak in children in the world.3 In Larkana, and in Pakistan in general, health awareness and knowledge, particularly in rural areas, is low, and subsequently certain high-risk behaviours are prevalent, making high-risk population vulnerable to HIV transmission. As a result, there is a strong possibility that the overall prevalence of HIV is underreported in Pakistan.4 Additionally, isolated reports have documented bridging of the epidemic between high- and low-risk populations; however, it is not known which high-risk groups in Larkana are responsible or have a greater chance of spreading HIV-1 in the district, which can give rise to more HIV outbreaks in the future.5

Mathematical probabilistic models have been used previously to forecast HIV / acquired immunodeficiency syndrome (AIDS)  transmissions.6 They assume the initial HIV burden to model the spread of HIV infection and predict future cases.7 One past study from Tanzania for example, applied a nonlinear mathematical model to study the effect of screening and treatment on transmission of HIV/AIDS infection in a population.8 In areas with high HIV transmission, mathematical probabilistic modelling can be useful in determining which key population groups have the greatest risk of HIV transmission; such information can aid in establishing effective interventional strategies.

Assumptions for the probabilistic model

Our model was run on three probabilistic assumptions:

1. Each replication of the method comes about in one of two conceivable results: true or false;

2. The likelihood of 'true' is the same for each replication;

3. The replications are independent, meaning that a 'true' in one HIV-positive individual does not impact the likelihood of 'true' in another.

Probability P for n or more HIV positive individuals is the outcome. 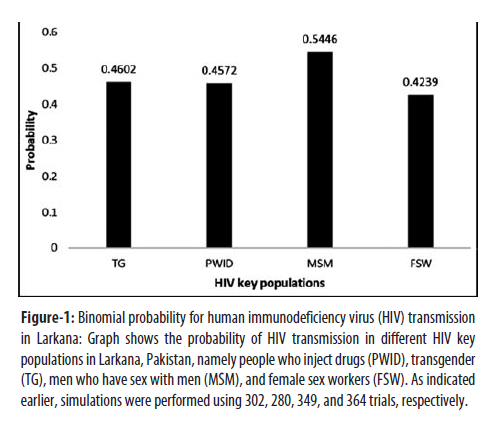 Contrary to the reported prevalence, the highest probability of transmission was predicted for MSM (0.54 per trial [349]), followed by TG (0.46 per trial [280]) and PWID (0.457 per trial [302]) (Figure-1). Since our model worked on the assumption that replications are independent of each other, meaning that the likelihood of acquiring HIV by one individual does not impact the likelihood of acquisition in another, the probabilistic measures of our study predict MSMs to be the major driver of HIV transmission in Larkana.

As indicated from the four key HIV population groups in Larkana, the highest probability of HIV-1 transmission (0.54) was estimated for MSM, followed by TG and PWIDs. These findings are in agreement with the published reports that identified that in Pakistan prevalence of HIV-1 in the general population is very low (0.04%), but very high in high-risk groups such as PWIDs (36.4%), HSWs (12%), MSMs (17.5%), and sex workers (53.5%).12 The increased prevalence of HIV in key population groups in Larkana is attributed to several factors, such as unemployment, poverty, lack of parental supervision, peer pressure and poor infection control practices, etc.13 Another important factor for the steady rise of HIV among PWID is lack of proper needle exchange programmes in the district.13 Moreover, Larkana has functioning brothels, where FSWs receive clients not only from the district but nearby cities as well. Additionally, there are also at least two motels on Larkana's Station Road which is located in the middle of the city where hijra (transgender) and MSW are available round the clock, which might be a probable cause of the high HIV prevalence amongst MSM, HSWs and FSWs in this region.14 In contrast to female sex workers, women in the general population are considered to be at low risk for HIV since they do not exhibit or indulge in high-risk practices.15 However in Pakistan, highly stigmatised MSMs often marry women to conceal their homosexual identity from society; their sexual relationships with their wives lead to HIV transmission to their wives.13,15 Additionally, children born out of this relationship can be HIV-positive.15

We anticipate few limitations of our analysis. First, to keep the outcomes as realistic as possible, the modelling was based on the reported prevalence of HIV in key population groups of Larkana. Underreported prevalence may likely lead to incorrect projections and the actual transmission probability can be higher than projected. Second, all probabilities were calculated assuming an equal chance of transmission, while it is possible that in reality some groups would have higher chances of transmitting HIV than others. These limitations can be addressed with dynamic mathematical modelling in follow-ups studies as more data from Larkana become available, providing a more robust estimate of HIV in different high-risk groups.

In conclusion, our current study, corroborating the finds of previous studies, suggest that the key HIV population groups in Larkana are likely to transmit HIV within the key population groups and possibly beyond the key populations to low-risk communities. In such a scenario the likelihood of getting new HIV cases is high over the next few years.3 Mathematic models, such as one proposed in our study, can aid the National/Provincial AIDS control programmes in evaluating and optimising the strategies in controlling transmission of HIV from the key population groups.

Funding: This study was funded by the Higher Education Commission Grant No. 5217/Sindh/NRPU/R&D/HEC/2016 and Pakistan Science Foundation Grant No. PSF/Res/S-AKU/Med (488).

Prevalence of HIV among pregnant women in three HIV-affected districts in Sindh, Pakistan

Baseline assessment of therapeutic injection practices in Pakistan in 2020: A cross-sectional study