Steroid cell tumours are rare type of sex cord-stromal tumour of the ovary, with the average age at diagnosis during the fourth decade of life. A 2-year-old girl presented with virilisation, precocious pseudopuberty and Cushing syndrome. Her morning cortisol level was elevated and there was left lower abdominal mass found in radiological examination. An explorative laparotomy followed by a left salpingo-oophorectomy was performed. Histopathological examination revealed an encapsulated solid yellow-tan tumour composed of polygonal cells arranged in nests/lobes, containing numerous vascular channels, with abundant, clear-to-granular eosinophilic cytoplasm, severe nuclear pleomorphism and no Reinke crystals present consistent with an ovarian steroid cell tumour (NOS). The tumours cells were diffusely positive with calretinin, weak focal positive for inhibin, melan-A, pankeratin, chromogranin and negative for AFP, HMB-45 and androgen receptors. Following the tumour removal, blood pressure regressed to normal. The patient was discharged and advised for outpatient care.

Ovarian tumours are rarely diagnosed in children, especially ovarian steroid cell tumours, a variant of sex cord-stromal tumour comprising of cells that secrete steroid hormone.1 Steroid cell tumours (SCT) in children are associated with precocious puberty and virilisation.2 This report describes a case of a steroid cell tumour, not otherwise specified (NOS) in a 2-year-old girl who presented with Cushing's syndrome and virilisation. Aspects of the diagnosis of the tumour are discussed emphasising in its histology and immunoprofile. Informed consent could not be obtained despite attempts to do so. The authors declare that every effort was made to anonymise the case report and any highly identifiable information is protected.

A 2-year- and 6-month-old girl was referred to our hospital in September 2017 with drowsiness, unresponsiveness, and inability to sit or stand up for three weeks. There was no history of fever, seizure or headache. Physical examination was significant for stage 2 hypertension, generalised acneiform papules, and cushingoid facies. She was stunted and obese. She showed signs of puberty (Tanner stage 3 pubic hair development) in addition to clitoromegaly, enlarged labia and hirsutism over the upper and lower extremities. 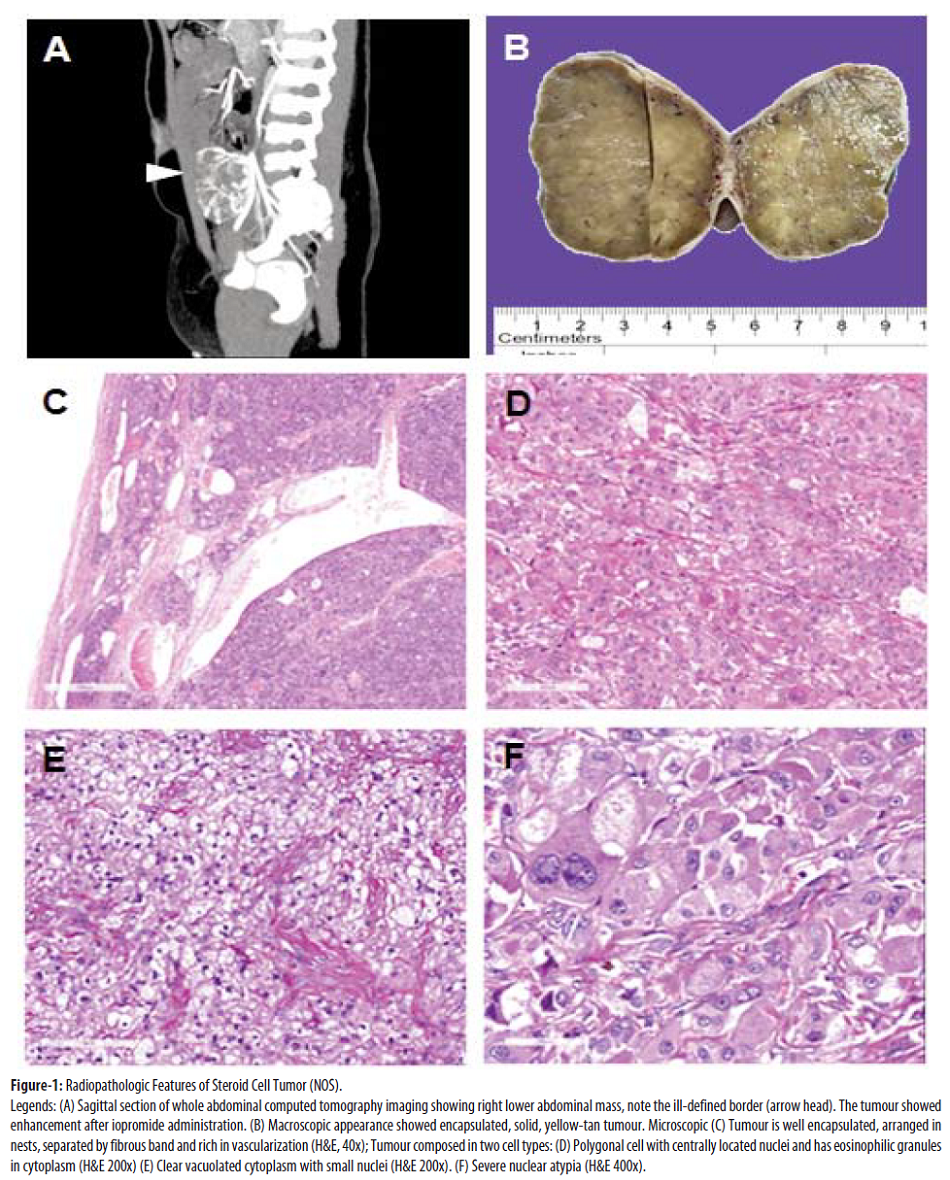 No focal lesion on pituitary gland found in brain imaging. 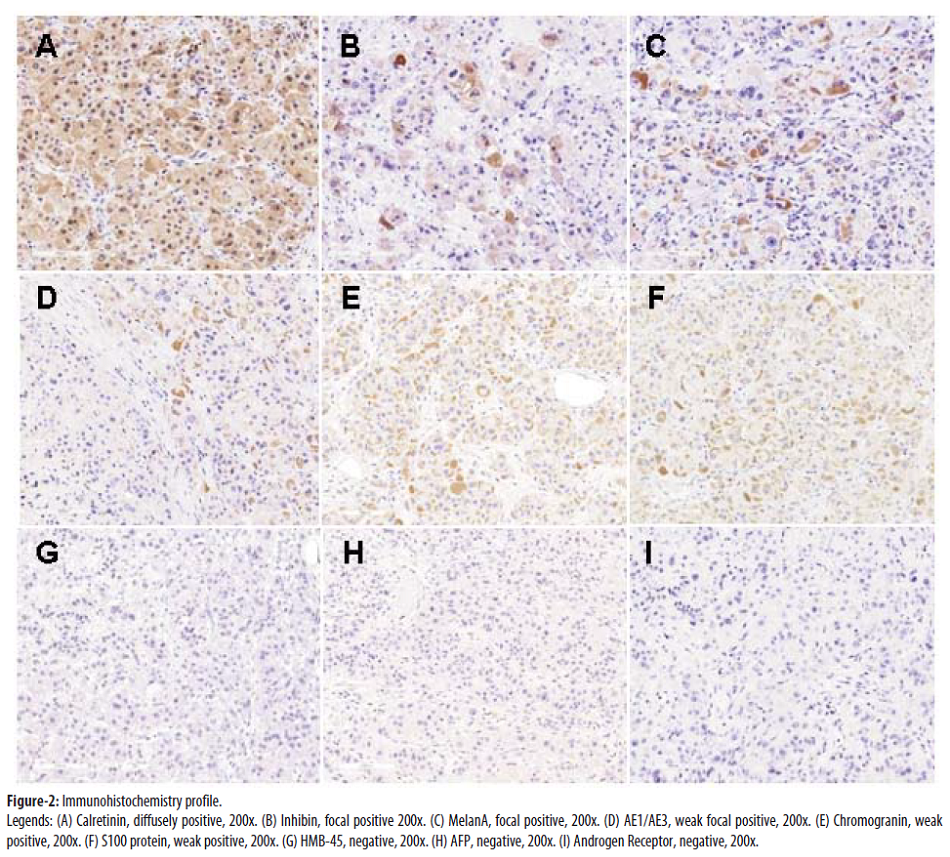 The cut section was solid, yellow with grey mottling. The histologic examination showed the tumour cells arranged in solid nests separated by thin fibrous septae and containing numerous vascular channels. The tumour comprised polygonal cells with distinct cellular borders and abundant, clear-to-granular eosinophilic cytoplasm. The nuclei were highly pleomorphic and vesicular. Up to 4 mitotic figures per 10 high power field (HPF) were identified. No area of necrosis and/or haemorrhage was present (Figure-3). The tumour cells were diffusely positive with calretinin, weak focal positive for inhibin, melan-A, pankeratin, chromogranin and negative for AFP, human melanoma black 45    (HMB-45) and androgen receptors (Figure-4). These findings were consistent with an ovarian steroid cell tumour (NOS). According to Hayes criteria,1 this tumour probably has malignant behaviour.

After surgery, the patient became more responsive and was able to stand up. Her blood pressure range was within p50-p90. The patient was still scheduled for a follow-up visit to control her body weight.

Ovarian steroid cell tumours are defined as neoplasms comprising of steroid hormone-secreting cells and lacking Reinke crystals. Steroid cell tumour accounts for 0.1-0.2% of all ovarian tumours and usually affects older women (5th - 6th decade of life; mean age 43).1,3 The SCT (NOS) occurs at younger ages, sometimes prior to puberty, compared to other SCTs.4 SCTs are subdivided based on their cell origin. Stromal luteoma arises from ovarian stroma and Leydig cell tumours arise from hilar Leydig cells. The origin of SCT (NOS) is thought to develop from the adrenocortical rests.1,3

Clinical presentations of Cushing's syndrome such as endocrine hypertension, obesity and growth failure were caused by excessive cortisol that is reflected in elevated morning cortisol level. Sawathiparnich, et al.,4 reported the first case of an ACTH-producing ovarian steroid cell tumour causing ectopic ACTH syndrome in a 6-year-old girl. The symptoms of virilisation such as acneiform papules, hirsutism and clitoromegaly were probably caused by increase testosterone levels due to the ACTH stimulation to the adrenal gland.4

The ovarian steroid cell tumours are usually unilateral (94%) and range from 1.2-45 cm (with an average size of 8.4 cm). Macroscopically, the tumours are well circumscribed and encapsulated. Mostly they appear lobulated or multinodular in the cut section, with solid tumours are more commonly found than cystic or mixed consistency. The colour ranges from yellow, or tan to grey-white. Foci of haemorrhage and/or necrosis may be found.1

Microscopically, steroid cell tumour cells are arranged in diffuse pattern, nests, clusters, or thin cords. The stroma is usually scant although it can be extensive, fibrous, hyaline, oedematous, or myxoid. Tumour contains rich network of thin walled blood vessels. In some tumours, foci of calcification, lipochrome pigment, necrosis and haemorrhage can be found. Reinke crystals must be absent. The neoplastic cells are categorised into two basic types, which can be present in equal numbers. The more common type is medium-to-large polygonal cells, cytoplasm containing eosinophilic granules, central nuclei and single nucleolus. The other type is the vacuolated cells with small nuclei. Some variants such as signet ring-like cells may also be observed.1 The most frequently reported positive immunostains are for calretinin and inhibin.3 Calretinin showed stronger and more diffuse staining, while inhibin showed a more variable result.2 Other immunostains that have been reported as positive in SCT include Melan A, human melanoma black 45 (HMB-45), S-100 protein,2 chromogranin A, cluster of differentiation 68 (CD68), CD34, placental alkaline phosphatase,5 oestrogen and progesterone receptor.6 Pankeratin is usually negative, but some reports have shown that the tumour presented a focal staining pattern.3 The electron microscopy may help in identifying the cytoplasmic secretory granules thus determining the hormone produced by the tumour.4

There is no established management for SCT. The treatment is similar to that of stromal tumours i.e., surgery and/or non-surgical therapy (chemotherapy, radiotherapy, or hormonal therapy using gonadotropin-releasing hormone agonist).8,9 SCT are usually benign, although 36% may be clinically malignant. Hayes and Scully1 proposed criteria based on histopathological features to determine whether SCTs are malignant. These include the presence of two or more mitotic figures per ten HPF, necrosis, a diameter of 7 cm or greater, haemorrhage and grade 2 or 3 nuclear atypia. The 5-years recurrent rate among the malignant tumour is 22% and more than 90% of patients were reported to have died due to the disease despite various therapies.1 The endocrine abnormalities regress variously in most patients but reappear with recurrence/metastases.1 Based on the criteria mentioned above, the tumour probably had pathologically malignant behaviour. We suggested a close follow-up to this patient, as it may recur.

We have reported the case of steroid cell tumour (NOS), probably malignant in an extremely young patient. She was treated with salpingo-oophorectomy and recovered well after surgery. This case report emphasises considering a neoplasm as an aetiology of excessive hormone production. Early diagnosis and treatment would prevent development of unfavourable sequel such as encephalopathy.