Hyperimmunoglobulin E syndrome (HIES) is a rare multisystem syndrome that affects musculoskeletal system, connective tissue, and immune system. Immune dysregulation in hyperimmunoglobulin E syndrome often accompanied by autoimmune diseases, such as systemic lupus erythematosus. While the role of IgG autoantibody is well known in the pathogenesis of systemic lupus erythematosus, other subtypes of autoantibodies, IgE in particular, are now known to be involved in autoimmune process. A female with known elevated IgE was diagnosed with adult onset HIES. Atypical chest pain and otherwise normal cardiac imaging studies prompted her for further lab testings. Positive antinuclear antibody immunofluorescence test and elevated anti ds-DNA led to SLE diagnosis. Lack of characteristic clinical manifestations complicates establishing HIES while showing the extent to which IgE elevation could be related to SLE.

Increased IgE level is a common finding in SLE, reflecting Th2 immune response. Although it is possible to find autoreactive or nonspecific IgE in SLE, both contribute to the pathogenesis of SLE. The increase of nonspecific IgE is related to SLE activity and its complications, while autoreactive IgE responds to autoantigens not targeted by IgG autoantibody, creating immune complexes, commonly in kidneys. To date, autoreactive IgE is known to target at least 7 autoantigens, some, APEX nuclease I, N-methylpurine DNA glycosylase, and CAP-Gly domain-containing linker protein family protein 4, are not targetted by autoreactive IgG. IgE autoantibody could be detected using ANA indirect immunofluorescence (ANA IIF), which typically observed as the fine-speckled pattern on Hep-2 cells substrate.4,5

A 38-year old female came to the allergy and immunology clinic of a tertiary health care centre in July 2018 with complaints of heartburn, chest pain, and shortness of breath, which were alleviated by rest. Angiography and echocardiography yielded normal results. She had a history of IgE level around 1,000 IU/mL and was diagnosed as HIES. The patient was treated with mycophenolic acid for 3 months, reducing IgE to 600 IU/mL. A complete blood count, urinalysis, blood chemistry, and allergy immunology tests were performed later.

Based on those results, the patient had a follow up ANA profile test which revealed strong antibody to native SS-A, nucleosomes, and weak Ro-52 as shown in Figure-1. 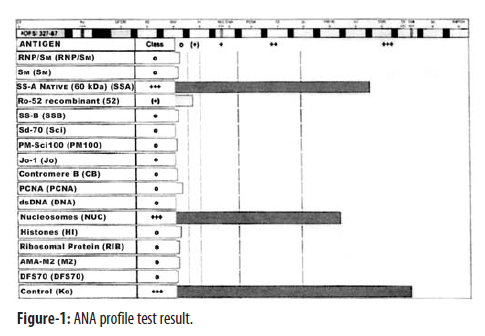 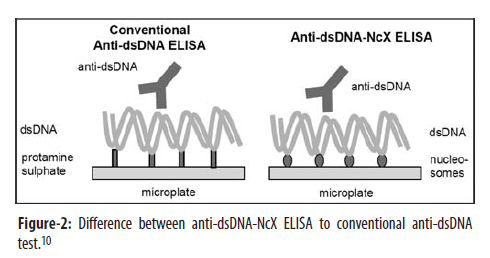 HIES is a genetic disorder that occurs sporadically or by inheritance, but symptoms could commonly be observed since childhood or early adolescence. Serum IgE is useful in assisting the diagnosis of HIES, but the patient's IgE of 613 IU/mL could be due to another primary immunodeficiency, infection, allergy, or SLE.10 Individuals with SLE produce varying autoantibodies, but autoreactive IgE is mostly prevalent in patients with more than 1/160 IgG ANA, and ds-DNA is the most commonly targeted autoantigen.4,5

Anaemia of chronic inflammatory state is the most common type of anaemia caused by both SLE and HIES while excluding other causes such as autoimmune haemolysis which still needs further workup. Thrombocytosis was more likely caused by reaction to inflammation. Positive blood by urine dipstick was inconsistent with otherwise normal urinalysis findings and renal function tests. Elevated liver transaminases were found in approximately 50% of SLE patients, but needed to be distinguished from other causes such as drug induced hepatitis or autoimmune hepatitis, which could be excluded by negative ribosomal protein antibody in the ANA profile test.6-8

Structural vascular defects were one of HIES manifestations; however, the exact prevalence rate was not known. However, defects such as tortuosity and focal aneurysm were ruled out since the patient had a normal angiography. Patient's angina like chest pain and heartburn were most likely associated to immunosuppressive therapies, including mycophenolic acid.9

The patient's homogenous ANA IIF and elevated anti-dsDNA supported immunologic criteria in diagnosing SLE, even though C3 and C4 were within normal ranges. ANA profile showed no reactivity to anti-dsDNA, but strong reaction was observed to nucleosome. Instead of protamine sulphate, both nucleosome and ds-DNA complex were used as substrates in anti-dsDNA-NcX ELISA method used in immunology laboratory of Cipto Mangunkusumo laboratory, explaining the discrepancy between anti-dsDNA and ANA profile test. The existence of autoreactive IgE had to be confirmed by IgE specific ANA fluorescence test.10

A 38-year old female with clinical info of hyper-IgE was found to have anaemia, thrombocythemia, elevated liver transaminases, homogenous ANA IIF with a titer of 1/1000, and strong ANA profile to SS-A, nucleosome, weak positive toward Ro-52, and negative anti ribosomal protein. She also had elevated anti-dsDNA and IgE levels. The diagnosis of SLE was supported by ANA, anti-dsDNA, and ANA profile. Diagnosis of HIES was not readily established due to lack of characteristic clinical manifestations and so needed further testing.