Objective: Endometriosis is a multifactorial disease that affects 10% of women of childbearing age. Its development is known to be related to the MMP-2 gene. Specifically, the expression of MMP-2 is increase in endometriosis. The aim of this study was to evaluate the correlation between mRNA expression and DNA methylation levels of the MMP-2 gene in peritoneal endometriosis.

Conclusion: The increase in MMP-2 gene expression in peritoneal endometriosis tissue is likely not only due to hypermethylation; there are other factors that might play a role.

Endometriosis is a common and complex disease in women that is usually characterised by the presence of endometrial-like tissue, such as stroma and glands located outside the uterus.1 Globally, the prevalence of endometriosis in women of reproductive or premenopausal age is around 10%, or around 176 million.2,3 Ping et al., using a microarray method, evaluated female endometrial tissue from endometriosis patients and found 2,255 genes whose expression increased and 408 genes with decreased expression in both focal adhesion and regulation of the actin cytoskeleton.4 The Matrix Metalloproteinase 2 (MMP-2) gene is involved in cytoskeleton regulation.4,5 The activation of MMP-2 encourages invasion of the tissue, causing degradation of the extracellular matrix (ECM),6 which could affect the cytoskeleton.5 However, the MMP-2 in peritoneal endometriosis tissue has not yet known it's mRNA expression and DNA Methylation level. This study aimed to compare mRNA expression, MMP-2 methylation level, and the correlation between mRNA expression and DNA methylation in peritoneal endometriosis compared to normal endometrial tissue.

This was a comparative cross-sectional study consisting of two groups: women with endometriosis and women without endometriosis. Determination of the minimum number of samples was based on a sample size formula or an estimated proportion (Lemeshow's formula).7-9 The prevalence of endometriosis in Indonesia based on data from several hospitals ranges from 13.6 to 69.55%. Thus, the sample size could be determined using the formula N = (Za) 2p (1 - p) / d2 (N = total sample size, Za = error rate (1.96), p = proportion of endometriosis (30%), d = precision (20%)), resulting in a total of 20 samples per group, from women aged 20-45 years. The study subjects were recruited from obstetric gynaecology clinics at CiptoMangunkusumo Hospital and Fatmawati Hospital, Jakarta. The study subjects were asked about their willingness to participate in this study before the tissues were taken. For women with endometriosis, peritoneal endometriosis tissue was taken using a laparoscopic technique; for women without endometriosis, normal endometrial tissue was acquired using the microcuretase technique.

The mRNA expression of the MMP-2 gene was measured using the RT-PCR technique. First, all collected samples were in RNA isolation using the Quick-RNA Miniprep Plus Kit (Zymo), and then the RNA was transcribed into cDNA using an Ace qPCR ReverTra RT Master Mix with gDNA Remover kit (Toyobo). Finally, the expression of mRNA was determined using the RT-PCR technique with a Thunderbird SYBR qPCR Mix kit (Toyobo).

The level of methylation of the MMP-2 gene was determined using the methylated specific polymerase chain reaction method (MSP PCR). First, all collected samples were isolated using a gSYNC DNA Extraction kit (Geneaid). Then, the isolated DNA underwent bisulfite conversion using an EpitectBisulfite kit (Qiagen). Finally, for the analysis of the methylation level of the MMP-2 promoter, MSP PCR was performed using an Epitect MSP kit (Qiagen). Amplification products from the MSP PCR step were confirmed by electrophoresis with 1.5% agarose gel, and the final results were visualised using an ultraviolet transluminator and photographed with a camera. The ImageJ application was used to measure band intensity. The ratio between the band intensity of samples and the positive control was determined as the DNA methylation level. Statistical Programme for Social Science (SPSS) version 23 software was used for data analysis. A t-test was used to analyse differences in mRNA expression and DNA methylation levels of MMP-2 genes between peritoneal endometriosis tissue and normal endometrial tissue for normally distributed data. However, if the data distribution was abnormal, a Mann-Whitney test was used for analysis. A Pearson test was used to analyse the correlation between mRNA expression and DNA methylation of the MMP-2 gene if the data distribution was normal; otherwise, a Spearman test was performed.

Analysis of the mRNA expression of the MMP-2 gene was performed with real-time PCR using an amplification curve depicting the cycle threshold (CT) value. MMP-2 gene expression increased. The results of the statistical analysis, based on an unpaired t-test, showed that there was a significant difference between peritoneal endometriosis tissue and normal endometrial tissue (p = 0.001). 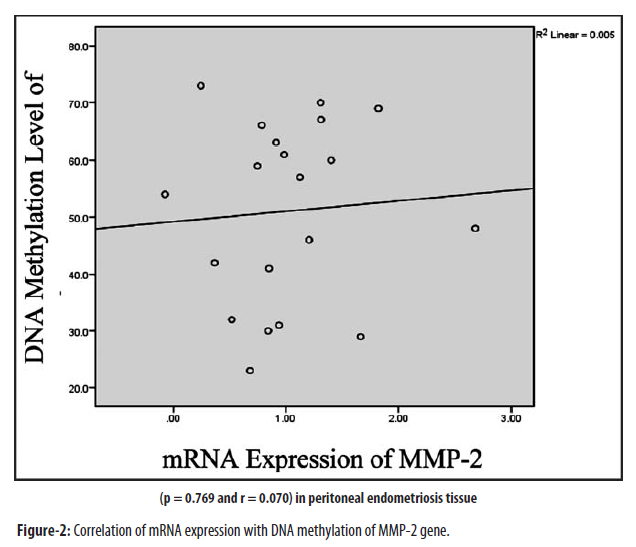 This findings regarding DNA methylation in the MMP-2 gene are not the same as those of Tang et al., who found that MMP-2 gene hypomethylation occurred in ectopic endometriosis tissue.14 Likewise, the study conducted by Lin et al. showed that MMP gene hypomethylation occurred in ischaemic stroke.16 This could be because the type of tissue was different in this study than that of Tang et al. Thus, the sensitivity of gene methylation might depend on the location of the endometriotic lesion.

The MMP-2 DNA methylation mechanism is not one of the main drivers of changes in gene expression in peritoneal endometriosis. Such changes could be due to other epigenetic mechanisms, such as histones and microRNA (miRNA) modifications, as well as mutations and polymorphisms. The histone modifications and changes in the expression of histone deacetylases that occurred have been found in endometriosis.4,19 MMP-2 is involved in the regulation of actin cytoskeleton, which could be activated by a variety of growth factors, including epidermal growth factor receptor (EGFR) through the MAPK pathway.5,4,20 The activation of MMP-2 encourages tissue invasion, causing degradation in the ECM.6 It is has been shown that the ECM affects the organisation of the actin cytoskeleton in non-muscle cells, smooth muscle cells, and striated muscle cells. In turn, ECM degradation could affect the cytoskeleton, causing it to change cell shape, motility and function. The interaction between the ECM and actin cytoskeleton is mediated by integrin receptors, which are transmembrane heterodimers capable of transmitting mechanical signals from the ECM to cells and transferring them to intracellular stimulation, which leads to changes in cell phenotype.5

There was an increase in the expression and level of methylation (hypermethylation of the MMP - 2 gene) in the peritoneal endometriosis tissue.

Acknowledgement: We are grateful to Dr. Achmad Kemal Harzif, Dr. Agus Surur Asadi, Dr. Gita Pratama, specialists at Department of Obstetrics and Gynaecology. We acknowledge the help of the nurses of the outpatient, inpatients and operating rooms of CiptoMangunkusumo Hospital and Fatmawati Hospitals, and all those who helped in this study.

Disclaimer: This manuscript has not been published in any journal. The abstract was presented as part of a poster presentation in the Malaysia Indonesia Brunei (MIB) International Conference, 2019 at the IMERI Faculty of Medicine, Universitas Indonesia.

Funding Disclosure: This study was supported by a grant (PITTA A 2019) from Universitas Indonesia.