Effects of paternal lymphocyte immunization in women with unexplained infertility

Objective: Infertility in women could be a result of an excessive production of antisperm antibody (ASA). Paternal lymphocyte immunization (PLI) could decrease the ASA levels, but the mechanism is still unclear. The aim of this study was to analyse the impact of a PLI-induced ASA decline on regulatory T-cell populations and serum interleukin-10 (IL-10) levels in women with unexplained infertility.

Methods: Samples were obtained from patients who came to Sayyidah Mother and Child Hospital in Jakarta from July 2018 to April 2019 with infertility problems. The inclusion criterion for this study was unexplained infertility. Each patient was examined for ASA titres using husband's sperm auto-agglutination test (HSAaT) method, and patients with ASA titres >1:128 were given PLI subcutaneously every 3 weeks. ASA titres were evaluated again 2 weeks after PLI with HSAaT. A total of 12 samples were analysed. Regulatory T-cell populations were evaluated using flow cytometry and human forkhead box P3 FoxP3 staining kit of Biotech and Device, and serum IL-10 was determined using an Abcam ELISA kit. The data were analysed using Wilcoxon and Spearman tests.

Conclusion: The decline in ASA was associated with a decrease in regulatory T cells due to a negative correlation with IL-10levels.

Paternal lymphocyte immunization (PLI) is a cell-based immunotherapy that stimulates activation and response of maternal immune system.1 PLI is performed using mononuclear cells separated from peripheral blood of husband in a Ficoll solution.2,3 These cells are then subcutaneously injected to the wife periodically in an effort to prepare maternal immune system so that pregnancy could take place. PLI was initially carried out in 1981 in several countries to resolve clinical cases, such as recurrent miscarriage and failure of in-vitro fertilization (IVF), with significant progress in pregnancy and live birth rates.1 In patients with recurrent miscarriage treated with LIT, the presence of ANA and TgAb was a risk factor for further pregnancy loss. Perinatal outcomes in those whose pregnancies continued were favourable.4 Four published meta-analysis found a beneficial effect of immunotherapy with lymphocytes in cases of RM, with significant improvements in the rate of live births.5 PLI can be used for immunotherapy in patients with recurrent spontaneous abortion. PLI has good efficacy and safety6 and can be used to treat recurrent spontaneous abortions (RSA) effectively. Furthermore, the detection of blocking antibodies showed a positive prediction on pregnancy outcome.7 A meta-analysis of recurrent miscarriage cases in a study involving 1,738 patients (a PLI group of 739 patients and a control group of 999 patients) revealed that PLI significantly improved live birth rate in recurrent miscarriage cases (OR 4.67, 95% CI 3,70-5,90).8 The efficacy of PLI for women with idiopathic infertility is around 43-73%. Another study has shown an efficacy of PLI of 38% in recurrent spontaneous miscarriages and 12% in idiopathic infertility.9 A study of 749 patients with recurrent miscarriages seeking treatment from October 2009 to June 2013 in China reported a successful and statistically significant conception rate of 89.7% in women treated with PLI.7

The mechanism underlying the success of PLI is not clear. The aim of the present study was to analyse the effect of PLI on antisperm antibody (ASA) titre, regulatory T-cell population and serum IL-10 levels in women with unexplained infertility.

This research method was observational, with a pre-post design. The study group consisted of 12 married women with ASA titres >1:128 who came to Sayyidah Mother and Child Hospital in Jakarta from July 2018 to April 2019 with unexplained infertility problems. A further 15 virgin women were enrolled as negative controls. The study was approved by Research Ethics Committee of Faculty of Medicine University of Indonesia (Number: 0437/UN2.F1/ETIK/2018), and all 27 participants signed an informed consent before enrolment. The study group women were older (32.5 years; range 28-35 years) than the control group women (25 years; range 25-31 years). The median length of marriage in study group women was 3.95 years (range, 3-10 years).

Peripheral blood was sampled from all study group subjects and evaluated for ASA titres using husband's sperm auto-agglutination test (HSAaT) method. This test measured antisperm antibody reactivity with prepared sperm from each woman's husband, not the sperm from a non-husband. Evaluation of APA titre after paternal leukocyte immunization (PLI) treatment always uses husband's sperm. This method involves washing the sperm with buffer and then observing autoagglutination reaction under a microscope.

The regulatory T cell population was analysed by flow cytometry with a human FoxP3 staining kit from Biotech and Device. IL-10 was detected in serum samples using an Abcam Human ELISA kit. Two analyses were carried out on each sample, one at the beginning of induction and the other after PLI had been performed three times. Exclusion criteria in this study were subjects who failed to complete PLI treatment. Data were analysed with IBM SPSS version 25.0. Wilcoxon and Spearman correlations were used for analysis. Differences were considered significant at p<0.05.

The results for 12 study group samples are shown in Table-1.

A correlation test between the levels of regulatory T cell populations and IL-10 was performed on 9 respondents who experienced a decrease in regulator T cell population after a decline in ASA. The results are shown in Table-2.

The correlation between ASA, IL-10 levels and regulatory T cell population is shown in Table-3. 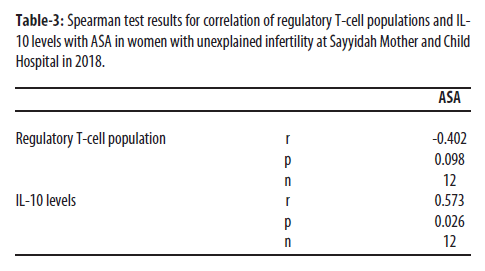 The reduction in ASA induced by PLI in wife did not appear to have a direct effect on cellular immunity, and especially on levels of regulatory T cells, in this research. Decreased ASA instead affected humoral immunity, as indicated by changes in IL-10 (p = 0.026, r = 0.573). The regulatory theory on T helper cells is that IL-10 is produced by antigen presenting cells (APCs) and Th2 cells to inhibit the cytokines secreted by Th1 cells.10 The Th1 cells that would ordinarily differentiate into regulatory T cells are suppressed by secretion of IL-10 by the Th2 cells. Regulatory T cells are known to play a role in protective immune responses through increases in Th1 or Th17 responses.11

IL-10 is an anti-inflammatory cytokine produced by Th2 cells and inhibits the action of pro-inflammatory cytokines such as IL-1, IL-6, IL-12 and TNF. IL-10 also inhibits APCs by inhibiting major histocompatibility complex (MHC) class II expression and inhibiting the action of co-stimulator molecules, such as CD 80 and CD 86. Biologically, IL-10 binds to IL-10R1 and IL-10R2 receptors that specifically initiate cascade signals. IL-10 activates the Janus kinase (JAK) and STAT pathways. In a normal pregnancy, IL-10 increases during trimesters I and II, but not in trimester III.16 IL-10 can normalize blood pressure and endothelial function in pregnancy-induced hypertensive rats and may be beneficial in women with hypertensive disorders of pregnancy.17 Hypothesised that alteration in expression of IL-10 is also associated with the incidence of the complications, regulation of IL10 expression during normal pregnancy is cautiously regulated.18 In the absence of a high serum level of IL-10, regulatory T cells will increase if ASA decreases, whereas a high serum level of interleukin 10 could inhibit this increase in the regulatory T-cell population.