Objective: To investigate the relationship between vitamin C intake and IL-6 level as a biomarker of oxidative stress during pregnancy.

Conclusion: There was no statistically significant association between vitamin C intake and IL-6 level in women during third trimester of pregnancy (p = 0.36).

Inflammation is often associated with disease, however, it could also be found under normal physiological conditions, such as pregnancy.1 The inflammatory response during normal pregnancy is primarily caused by increasing systemic oxidative stress due to the production of free radical species.2 The reactive species are abnormally generated by mitochondria, which are abundant in placenta.3 These reactive species induce cell apoptosis and necrosis that further attracts immune cells, such as leucocytes, to respond against damaged cells through the production of interleukin-1 (IL-1), interleukin-6 (IL-6) and tumour necrosis factor alpha (TNF-a).4

Oxidative stress is strongly associated with preeclampsia, one of the complications manifested during pregnancy.5 Signs of preeclampsia include hypertension and proteinuria. These signs usually occur at gestational age of 20 weeks or later. Studies indicated that preeclampsia is closely related to increased IL-6 levels.4,6,7 The ultimate complication caused by preeclampsia and oxidative stress is an increased risk of death from pregnancy as well as delivery. Globally, up to 830 women die from preeclampsia every day.8 Most of them are from developing countries, including Indonesia especially, where 359 out of 100,000 women died during delivery in 2012.9

In order to decrease mortality rate during delivery caused by oxidative stress, the role of antioxidants to neutralise excessive free radical production should be considered. Vitamin C, also known as ascorbic acid, is a low molecular weight carbohydrate with an enediol structure. Hence, it is a potent electron donor that could provide antioxidant protection against preeclampsia-related oxidative stress. Daily intake of vitamin C is obtained by consuming fruits and vegetables, as well as enriched foods and beverages.10,11

This hospital-based cross-sectional study was conducted in polyclinic and emergency unit of Department of Obstetrics and Gynaecology at Cipto Mangunkusumo National General Hospital from August 2018 to October 2018 under the approval of the Health Research Ethics Committee FKUI-RSCM no. LB.02/2.2/10796/2018. The study participants included women during third trimester of pregnancy (28 - 42 weeks gestational age) aged 18 years or older with a single, living, intrauterine pregnancy. All participants were required to provide written informed consent. The exclusion criteria included smokers and women with infectious diseases. Subjects were divided into two groups: women diagnosed with preeclampsia and women without preeclampsia. Since this is a preliminary study, the researchers decided to use 0.6 as the medium correlation coefficient, which resulted in 20 subjects being required for each group using consecutive sampling.

Eligible subjects had their peripheral blood drawn for IL-6 measurement using the ELISA assay. In addition, patients were interviewed using a semi-quantitative Food Frequency Questionnaire (FFQ) to assess their daily vitamin C intake. The data collected from FFQ were then processed using NutriSurvey programme by EBISPro to quantify each participant's vitamin C intake. All variables were then analysed using Statistical Package for Social Sciences (SPSS) ver. 20 for Windows by IBM: New York.

The data obtained were initially assessed with Shapiro-Wilk test to determine their data distribution. Additionally, age, gestational age, vitamin C intake and IL-6 level between different groups of patients were analysed using either independent t-test for normal data or Mann-Whitney and Chi-square tests for non-normal data. The test for correlation between vitamin C intake and IL-6 level was obtained using Spearman correlation.

This study included 40 women during third trimester of pregnancy at Cipto Mangunkusumo National General Hospital in Jakarta, Indonesia. They were divided into preeclampsia group and non-preeclampsia group. Age and gestational age variables were described as part of the inclusion criteria. The detailed characteristics of subjects are reported in Table-1.

The mean age of the women in preeclampsia group was 30.9±7.9 years, while mean age of women in non-preeclampsia group was 29.6 ± 5.4 years. This difference was not statistically significant (p = 0.55). In addition, women admitted into hospital had a status quo of third trimester pregnancy (shown in Table-2), which was proven by lack of statistically significant difference in gestational age between the groups (p = 0.34). 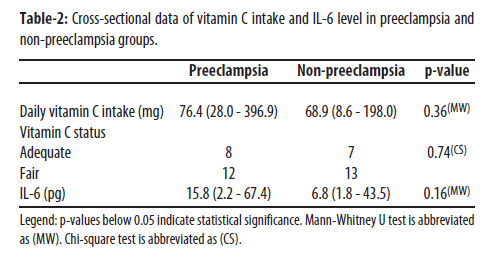 To measure the association between vitamin C intake and IL-6 level, a Spearman correlation test was conducted.

Lack of fruit and vegetable consumption was reported to be one of the causes of inadequate vitamin C intake in pregnant women. The other was food processing, which causes vitamin C to be lost from food and beverages. In addition, area of residence, age, education and socio-economic status also acted as risk factors for vitamin C deficiency in pregnant women.19

Results of Pearson non-parametric correlation test showed that vitamin C reduced IL-6 levels in all subjects with r = -0.15. The same results were also acquired in preeclampsia and non-preeclampsia groups where vitamin C reduced IL-6 levels, with r = -0.14 and r = -0.20, respectively. However, the correlation value acquired was relatively low, and there were no significant results in three correlation tests. Although, to the best of authors' knowledge, there were no studies evaluating correlation between vitamin C and IL-6 levels in preeclamptic women; studies linking vitamin C with IL-6 levels in other diseases, such as metabolic and cardiovascular diseases, have been conducted. A study by Mikirova et al., showed no significant effects of intravascular vitamin C administration on IL-6 levels of mRNA from mononuclear cells in metabolic diseases.23 Those results are different from a study conducted in Palestine, which found that 500 mg vitamin C supplementation for eight weeks reduced IL-6 levels significantly in hypertensive or obese patients with diabetes (p = 0.001).24 It should be noted that the study by Mikirova et al., had a limitation, i.e., shorter intervention time when compared to the study in Palestine.

Theoretically, vitamin C should be able to reduce IL-6 levels and decrease inflammation as well as oxidative stress. Vitamin C is a potent antioxidant and is easily acquired from many sources. Due to its role as an electron donor, it has the potential to stabilise free radicals. Decreasing free radicals might also ameliorate oxidative stress that augments inflammation process. Inflammation and oxidative stress are basis of many pregnancy complications, including preeclampsia. The reduction of inflammation may also reduce the expression of proinflammatory cytokines, such as IL-6.5,6,11 This theory is supported by studies conducted by Klemmensen and Zhang, which found that pregnant women with higher vitamin C intake had a lower risk of developing preeclampsia.17,18 Another study conducted by Ellulu found that 500 mg daily vitamin C supplementation could significantly reduce IL-6 levels in hypertensive, diabetic and obese patients.24

The similar correlation coefficients between the two groups in this study might have shown that vitamin C could reduce IL-6 levels in both preeclamptic and non-preeclamptic women, but no significant correlation was shown by statistics. This could be due to inadequate vitamin C intake in both preeclamptic and non-preeclamptic groups. A study conducted by Klemmensen showed that severe preeclampsia could be ameliorated by daily vitamin C intake of between 130 and 170 mg.17 The disparity of vitamin C daily dose in the study by Klemmensen and this study (less than 85 mg daily) is actually quite great, given that vitamin C intake shown in this study is below the recommended dietary allowance (RDA). Besides that, the physiological increase of IL-6 levels during third trimester of pregnancy in order to aid the process of delivery might also be a plausible reason for lack of statistically significant results in this study. From another perspective, this study only addressed the correlation between vitamin C and IL-6 as an inflammatory marker, whereas free radical scavenging activities are not only performed by vitamin C but also other exogenous antioxidants, such as vitamin A and E, and endogenous antioxidants, such as glutathione and manganese superoxide dismutase (MnSOD).25 To summarise, the role of other antioxidants could not be excluded. It should then also be taken into account that the subjects in this study were not matched subjects but had various medical histories of acute and/or chronic diseases, as well as, other pregnancy complications. Those conditions could potentially be associated with more severe inflammation and unpredictable comorbidities when compared with normal pregnant women.

Knowing that inflammation in pregnancy is a physiological process and excessive inflammation could lead to complications in pregnancy, adequate antioxidant intake is suggested for all pregnant women. Vitamin C is an example of an antioxidant, which could easily be acquired from fruits and vegetables. Foods high in vitamin C include citrus fruits, such as oranges, mangoes, papayas, guavas; and vegetables, including broccoli, spinach and lettuce. In addition to vitamin C, adequate intake of other antioxidants, such as vitamin A and E, would give the best results in reducing free radicals and inflammation.

Although many studies discussing vitamin C and IL-6 have been conducted, studies that correlate vitamin C and IL-6 levels in preeclamptic women during third trimester have not yet been performed. Albeit with lack of statistically significant results, this study could be considered preliminary research. The authors hope this study could help society in realising the importance of fulfilling the RDA for antioxidants, especially vitamin C as an anti-inflammatory agent.

Like other studies in general, this study has limitations. One of its limitations is that it used a semi-quantitative FFQ because subjects tend to forget about food and portion size eaten for the past month. In addition, the sample size in this study is relatively small, which resulted in lack of statistical strength to identify very small differences. The other limitation of this study is its location at the Cipto Mangunkusumo National General Hospital, which is national referral hospital in Indonesia. Because there are more complex disease histories and comorbidities at this hospital that could affect study results, caution should be exercised when extrapolating these results to general population. Finally, the cross-sectional design of this study is another limitation as it is unable to truly demonstrate cause effect relationship between vitamin C and IL-6 levels.

From the results of this study, it could be summarised that vitamin C did not correlate with IL-6 statistically in preeclampsia and non-preeclampsia groups or in total. Since vitamin C intake of pregnant women failed to fulfil RDA and increasing IL-6 levels demonstrated severe inflammation, it is suggested that pregnant women should be offered education and counselling to encourage meeting the daily requirements of vitamins A, C, E and other exogenous antioxidants through fruit and vegetable consumption.

20.    Tarnowska-Madra U, Leibschang J, Kowalska B, Filipp E, Kozar A, Nimer A, et al. Levels of immunoreactive cytokines in serum of women with preeclampsia or severe pregnancy hypertension. Ginekol Pol 2010;81:192-6.