Objective: To investigate the auto-induction of transforming growth factor-b1 (TGF-β1) in breast cancer stem cells (BCSCs) and its effect on cell viability and stemness.

Conclusion: TGF-β1 treatment in low concentration and for short period of time triggers its auto-induction in BCSCs, leading to increased cell viability and stemness gene expression via autocrine signalling.

Breast cancer is the most frequent cancer and cause of cancer-related deaths in women around the world.1 Some subtypes of breast cancer are known to be very aggressive and have a poor prognosis due to their recurrence capability after therapy.2 A considerable amount of evidence suggested that survival of a rare population of cells with stem cell-like properties might be responsible for breast cancer recurrences after an initial response to chemotherapy. These undifferentiated cancer-initiating cells in breast cancer, also called breast cancer stem cells (BCSCs), retain the capacity to self-renew and drive continued expansion of a heterogeneous tumour, which might give rise to malignant cells resistant to chemotherapy. These properties of BCSCs underline the importance of uncovering cellular mechanism that regulates their behaviour to identify possible therapy targets.2,3 Octamer-binding transcription factor 4 (OCT4) and aldehyde dehydrogenase 1 family member A1 (ALDH1A1) have been widely regarded as BCSC markers.4,5 OCT4 is one of 25 transcription factors that have been reported to be expressed in stem cells and belongs to the Pit-Oct-Unc family (POU) of DNA-binding proteins.4,6 It is also known as a master pluripotency gene, and its expression is associated with maintenance of BCSC pluripotency properties.4 ALDH1A1 is a member of ALDH1 superfamily of enzymes, which are involved in bio-activation and detoxification of various intracellular aldehydes in a nicotinamide adenine dinucleotide phosphate (NAD(P)+)-dependent manner.5 ALDH1A1 activity alone has been reported to regulate stem cells' self-protection and contribute to breast cancer cell therapy resistance.5,6 The importance of these two genes makes them relevant molecular markers of BCSCs. Two major elements involved in breast cancer pathogenesis and progression towards malignancies are biological actions and cross-communication between cancer cells or with stromal cells in tumour microenvironment that are mediated by secreted cytokines.7 Cytokines play a crucial role in modulation of cancer growth, maturation, differentiation and progression. One of the most studied cytokines responsible for regulation of cellular behaviour is transforming growth factor-b (TGF-β). The TGF-β pathway plays a dynamic role in a variety of cell types and tissues. TGF-β triggers cell-specific and context-dependent effects that often appear conflicting.7,8 In breast cancer, TGF-β activity plays both tumour suppressor and tumour promotor roles. Epithelial cells are meticulously perceptive to anti-proliferative action of TGF-β, which is widely presumed to be vital for TGF-β tumour suppressor activity.9 However, both complete depletion and high persistence of TGF-β signalling in mouse models promoted metastasis.10 These seemingly paradoxical findings highlighted our inadequate understanding of TGF-β pathway role in breast cancer.8,10

TGF-β signalling is known to auto-induce its gene expression to enhance autocrine signalling.11 In our previous studies, we reported that a heat-activated conditioned medium from umbilical cord stem cells enhanced the expression of TGF-β and TbR1 genes in human BCSCs.12 The heated secretome of stem cells from exfoliated deciduous teeth that contain activated TGF-β also increased stemness gene, OCT4 and ALDH1A1 expression in BCSCs (aldehyde dehydrogenase positive; ALDH+).13 However, it was not clear whether this increased expression was solely caused by TGF-β or another substance in conditioned medium. This study aimed to investigate auto-induction of TGF-β in BCSCs and its implication on cell viability and stemness.

A total of 3 × 105 BCSCs were seeded in 12 well plates in a serum-free medium with 0.1 ng/ml recombinant human TGF-β1 (rhTGF-β1) protein (Sigma-Aldrich, St. Louis, MO, USA). After periods of 1, 2 and 4 hours, the medium was replaced with serum-free DMEM/F12 without rhTGF-β1 to ensure that only newly secreted TGF-β1 protein would be measured. The cells were harvested after a 24-hour incubation period and determined using trypan blue exclusion method and an automated cell counter (Logos Biosystems, Gyeonggi-do, South Korea), whereas non-treated cells served as control.

The total RNA was extracted using Tripure Isolation Reagent® (Roche Diagnostics, Basel, Switzerland) according to manufacturer's instructions and was quantified using UV spectroscopy absorbance at 260 and 280 nm. An absorbance ratio of A260/A280 was used to determine RNA purity; a ratio of 1.8-2.1 was considered highly purified. The quantity of total RNA extracted was calculated using A260 reading, where 1.0 is equivalent to ~40 µg/ml single-stranded RNA. Quantitative real-time reverse-transcriptase polymerase chain reaction (qRT-PCR) was performed in a one-step reaction using the SensiFAST™ SYBR® No-ROX kit (Bioline, London, UK) in a 7500 Fast Real-Time PCR System (Applied Biosystems, Waltham, MA, USA) according to manufacturer's instructions to determine the expression rate of target genes. The specific primers for each of the target genes and their annealing temperatures are listed in Table-1.

A small amount of rhTGF-β1, as little as 0.1 ng/ml, showed the highest auto-induction effect in BCSCs (ALDH+) (Figure-1a). 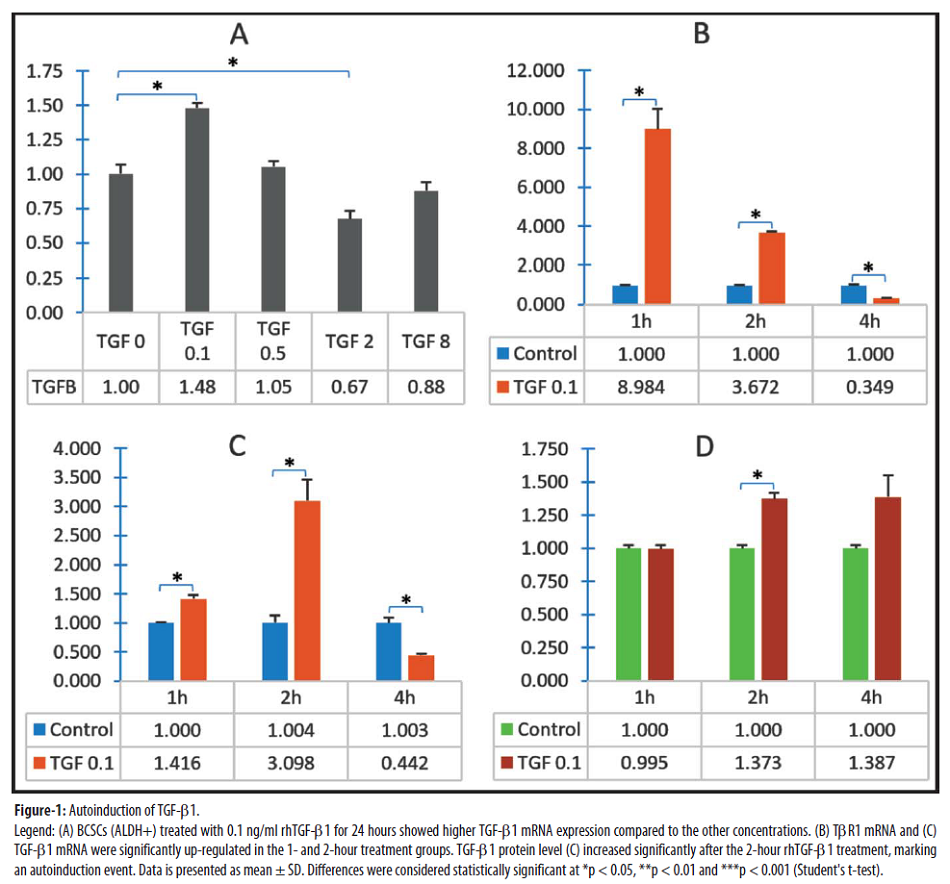 To investigate the implications of TGF-β1 auto-induction on BCSC (ALDH+) stemness properties, we determined the expression of OCT4 and ALDH1A1 mRNA as stemness-related genes. OCT4 mRNA expression showed a pattern similar to TGF-β1 mRNA expression, as it was significantly elevated and even took the same peak time after 2-hour treatment (Figure-2a). 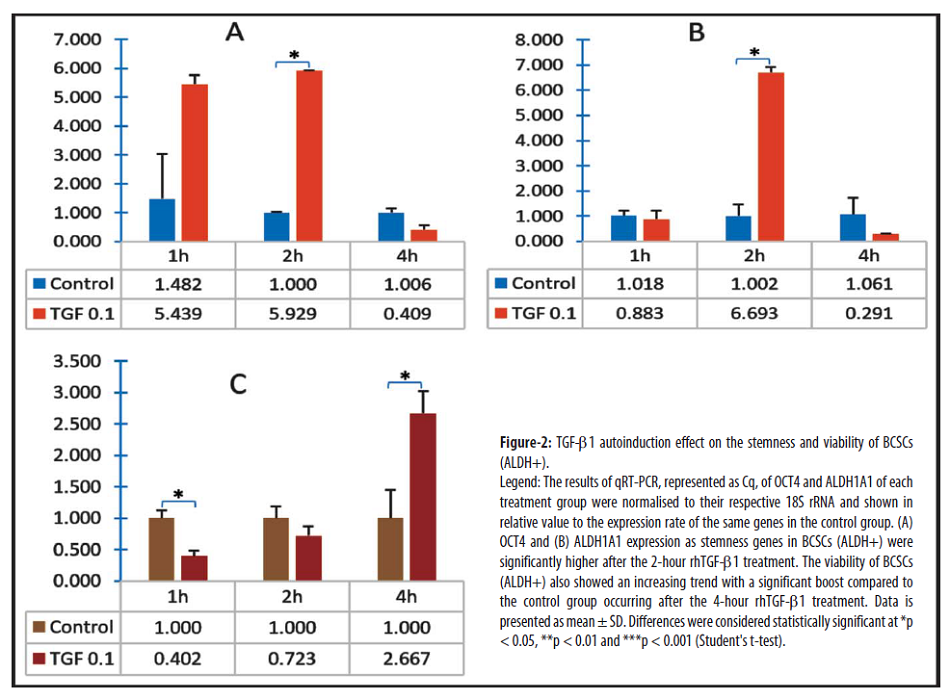 The viability of BCSCs (ALDH+) exhibited an increasing trend. After treatment for 1 and 2 hours, it was still below control but gradually rising. It eventually increased 2.7 times compared to control after 4 hours (Figure-2c).

TGF-β proteins are homodimer molecules bonded by disulphides bonds. Each monomer has a b strand that overlaps by forming a cysteine node. The TGF-β signalling pathway is initiated by activated TGF-β ligands binding to type 2 TGF-β receptor (TbR2) extracellular domain. The activated TbR2 is then recruited and phosphorylate type 1 TGF-β receptors (TbR1) through kinase activity.17 TbR1 activation then induces the intracellular activity of advanced signalling pathways, both canonical (Smad) and non-canonical (non-Smad).

In some types of cells, the TGF-β pathway could also induce its own secretion. Through the unique phenomenon of positive feedback called auto-induction, certain cell types express TGF-β gene after exogenous TGF-β exposure. These auto-induction events could strengthen the response to growth factors in pathological processes such as carcinogenesis.11,18 Our result showed that TGF-β1 treatment in a low concentration and in a short period triggers its gene expression in BCSCs (ALDH+). Such activity has been reported in several types of cells, such as human renal tubule epithelial cells, human lung fibroblasts and ras-transformed mammary epithelial cells,11,19,20 but never, to our knowledge, in BCSCs (ALDH+). The significantly higher secretion level of TGF-β1 protein after the 2-hour treatment confirmed the auto-induction of TGF-β1 in BCSCs. However, there seems to be a time lag between mRNA expression of TGF-β1 and the secretion of its protein, as TGF-β1 protein level was only significantly higher than control after treatment for 2 hours. The TGF-β auto-induction in BCSCs might increase local TGF-β levels and provide continuous stimulation not only for BCSCs but also for its surroundings.

TGF-β1 signalling might regulate different transcription factors through different pathways depending on cellular context. The selection of specific role of TGF signalling is in some way related to cofactor assisting transcriptional regulator that works in TGF pathways. For example, in Smad pathway, the heterotrimer Smad protein complex (two Smad2/3 and one Smad4), formed after being activated by TbR1, subsequently translocates into the nucleus and acts as a transcriptional regulator at certain sites in DNA. The Smad complex could recognize several DNA sequences but requires association with various cofactors to increase its affinity. The cofactor whose role is to assist the binding of the Smad complex to DNA may differ according to the specific site of interest.17 Variations in cofactor expression in different cell types underline the selective effect of TGF-β signalling on its target genes in specific cellular contexts, as each cofactor might act as a transcriptional coactivator or corepressor.

The results of this study suggested that TGF-β1 auto-induction event in BCSCs eventually leads to the increase of cell viability and stemness gene expression via autocrine signalling. The expression of TbR1, TGF-β1 and stemness genes shows comparable patterns. Except for ALDH1A1 after 1-hour treatment, they were all up-regulated and down-regulated after same treatment periods. It is already known that in a pathological scenario, TGF-β autocrine pathway could maintain cancer cell self-renewal through Sox4-Oct4 route. Sox4 as a direct target of TGF signalling binds with Oct4, and together they induce another stemness gene, Sox2.21,22 In contrast to Oct4, ALDH1 activity in stem cells has been reported to be related more to the increasing resistance to oxidative stress, thereby increasing stem cell resistance to chemotherapy.23 Although more research is needed to confirm it, TGF-β might increase ALDH1A1 expression through the activation of twist-related protein 1 (TWIST1). In colorectal cancer, TWIST1 activated by TGF signalling pathway has been reported to suppress E-cadherin, induce SNAI1 and elicit stem phenotypes by inducing ALDH1 expression.23 Our result implies that Oct4 and ALDH1A1 might share a related path in their respective upstream pathways, or that they are stimulated by a similar regulatory factor. Unveiling this shared joint might be useful for developing TGF-β-related targeted cancer therapies in future studies.

The TGF-β1 auto-induction event in BCSCs (ALDH+) needs to be highlighted, as it might worsen not only the pathological effect regarding stemness properties but also its surrounding cancer cells. TGF-β1 secreted by BCSCs (ALDH+) might also affect metastasis potential of breast cancer cells, as in experimentally induced tumour Ha-ras-transformed mammary epithelial cells.20 Eradicating cancer stem cells is one of the main objectives of cancer therapy. Since TGF-β1 auto-induction seems to play an important role in modulating BCSC properties, targeting its pathway might prove to be an excellent alternative in treating breast cancer subtypes that contain a large proportion of BCSCs.

TGF-β1 auto-induction in BCSCs might be triggered by a short-period low-concentration TGF-β1 treatment. It also leads to increased cell viability and stemness gene expression via autocrine signalling. In-depth studies are further needed to reveal the stemness-enhancing fork of the TGF-β1 auto-induction pathway in BCSCs in order to minimize the pathological effect of TGF-β1.

Acknowledgement: We thank Molecular Biology and Proteomics Core Facilities of Indonesian Medical Education and Research Institute (IMERI) and Department of Biochemistry and Molecular Biology, Faculty of Medicine, Universitas Indonesia for equipment and technical support for this research.

Disclaimer: This research was part of Master Thesis Project and has been previously presented in Malaysia-Indonesia-Brunei Medical Sciences Conference 2019.

Funding Disclosure: This research was funded by Master Thesis Grant (Hibah Tesis Magister) 2019 from Ministry of Research, Technology, and Higher Education of the Republic of Indonesia.