Objective: -This study aimed to analyse the expression pattern of FOXO3a in leucocytes of elderly women according to their lifespans.

Methods: It was a cross-sectional study involving 60 healthy elderly female subjects living in Jakarta. Women were classified based on age as younger (60-70 years of age) and older (> 70 years of age). Blood samples were taken for the preparation of leucocyte cells for RNA isolation. FOXO3a mRNA expression was analysed using quantitative polymerase chain reaction (qPCR).

Results: The relative mRNA expression of FOXO3a in leucocytes was significantly higher in the younger group (60-70 years of age) than in the older group (> 70 years of age).

The transcription factor Forkhead box O3a (FOXO3a) is believed to act as an anti-ageing molecule, and its expression is thought to be associated with longevity.1 These hypotheses may be linked to the action of FOXO3a, which protects cells from oxidative damage by increasing the expression of endogenous antioxidant enzymes, such as manganese superoxide dismutase (MnSOD) and catalase, that eliminate free radicals.2 The accumulation of free radicals is known to cause oxidative stress, which leads to the ageing process.3

Ageing is defined as an inevitable biological phase in which the physiological function of the body gradually decreases, thereby encouraging degenerative diseases and eventually leading to death.4 The size of the elderly population is now growing globally, and Indonesia is seeing a significant increase in the number of elderly women.5 Therefore, the biological and molecular ageing mechanisms require more comprehensive training to preserve the health status of elderly people and to detect anti-ageing molecules. The alleged function of FOXO3a as an anti-ageing molecule indicates the possibility of slowing the ageing process, and maintaining a stable and active ageing status among the elderly by modulating FOXO3a expression.

FOXO3a is expressed in different cells, such as the brain, liver, lung, muscle and skin.6 However, FOXO3a expression in aged cells is not well known. This study aimed to analyse the expression patterns of FOXO3a in leucocytes from elderly women classified, according to lifespans. This is a preliminary study to expand on the potential function of FOXO3a as a longevity biomarker.

This cross-sectional study was done from August 2018 until January 2019 on 60 elderly females living in Jakarta, Indonesia.  Consecutive sampling method was chosen and the inclusion criteria included healthy elderly women over 60 years of age who signed an informed consent form. Exclusion criteria included subjects with total immobility, hypertensive emergency or severe exacerbation of chronic obstructive pulmonary disease. Subjects were grouped by age into younger group (60-70 years of age) and older group (> 70 years of age). Ethical permission was taken from the Ethics Committee of the Faculty of Medicine, Universitas Indonesia (Number 0910/UN2.F1/ETIK/2018).

Blood samples were collected from all subjects for the preparation of leucocyte cells. Total RNA was isolated from the leucocytes using the kit (Tripure RNA Isolation kit, Roche®) following the manufacturer's instructions. Concentrations of RNA and purity were measured with a spectrophotometer. Total RNA was kept at -80°C before it was used.

FOXO3a mRNA expression was analysed using a SYBR Sensi Fast One-Step qRT-PCR kit (Bioline®) and detected by the quantitative polymerase chain reaction (qPCR). Primers for FOXO3a were 5'-TCTACGAGTGGATGGTGCGTT-3' (Forward) and 5'-CGACTATGCAGTGACAGGTGG-3' (Reverse),7 while primers for 18S rRNA, as the housekeeping gene, were 5'-AAACGCCTACCACATCCAAG-3' (Forward) and 5'-CCTCCAATGGATCCTCGT TA-3' (Reverse).8 The relative mRNA expression of FOXO3a was calculated using the Livak method9 as a ratio compared to the control. The controls used in this research were ten young women aged 20-30 years old.

Data were presented as minimum-maximum values with medians because the data was not normally distributed. The data was analysed using the Mann Whitney test.

Characteristics of the age of the subjects are shown in Table. 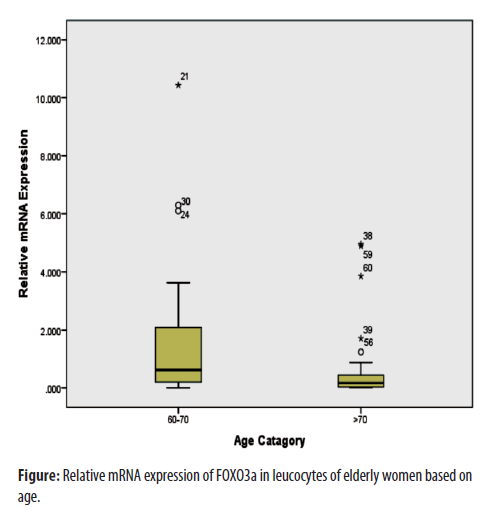 The difference between these groups was statistically significant (p < 0.05); the pattern of mRNA expression of FOXO3a indicated significantly lower expression in the older group than in the younger group. The expression values, however, varied widely in each group.

FOXO3 belongs to subclass O of the Forkhead family of transcription factors that have a DNA-binding domain for specific target genes. FOXO3 acts as the master regulator for gluconeogenesis, DNA repair, cell cycle arrest, stem cell homeostasis, immune system modulation, differentiation, cell death, redox balance and proteostasis.1 The FOXO3a transcription factor can be inhibited and translocated from the nucleus when phosphorylated at the Ser-253 residue by the AKT/PKB protein associated with the PI3K signalling pathway. The proteasome then degrades phosphorylated of FOXO3a. By comparison, dephosphorylation of the phosphatase-2A protein promotes the restoration of the nuclear location of FOXO3a and activation of its target genes.10

The low level of FOXO3a mRNA expression may be a response to high levels of the FOXO3a protein. Analysis of FOXO3a protein is therefore required to validate our findings. However, Pradhan et al.17 observed a substantial decrease in FOXO3a protein expression with increasing age in the serum of subjects in three age groups (20-30 years old, 60-79 years old and > 80 years old) subjected to stress. These researchers indicated that FOXO3a protein may affect redox homeostasis and evoke age-related disease.17

The FOXO3a mRNA expression in our research has shown a varied range that may indicate the existence of genetic polymorphisms of the FOXO3a gene. FOXO3 polymorphism has been associated with longevity in Japanese, German, Italian, Danish and Chinese populations,18 but polymorphisms have not yet been identified in the Indonesian population. Polymorphism analysis is therefore needed in future research. Li et al19 showed more single-nucleotide polymorphisms (SNPs) in centenarians than in a younger population. Polymorphic genes could increase the enhancer activity of FOXO3a, allowing for an increase in FOXO3a expression.20 One of the limitations of our study was that the level of FOXO3 expression was only measured at the mRNA level, which does not always reflect the protein level.

FOXO3a mRNA expression showed a particular pattern of expression in the leucocytes of elderly women classified by age. Overall, the mRNA FOXO3a expression decreased with rising age. However, more research is required to evaluate FOXO3a expression at the protein level for the establishment of FOXO3a as an anti-ageing biomarker.

Disclaimer: This research was presented in Malaysia - Indonesia - Brunei Medical Science Conference in 2019 and was part of a thesis project.

Funding Disclosure: This study was funded by Ministry of Research, Technology and Higher Education Republic of Indonesia through Thesis Magister grant 2019.