Objective: To identify the relationship between burnout stress and physical activity, specifically in pre-clinical medical students at Universitas Indonesia.

Methods: This cross-sectional study included 318 students selected by stratified random sampling. The Maslach Burnout Inventory General Survey was used to measure burnout stress, and the International Physical Activity Questionnaire Short Form was used for physical activity. Correlation and multiple regression tests were performed to evaluate the relationship between all variables.

Results: Overall, most students had a moderate burnout stress and moderate physical activity level. Spearman's correlation showed a statistically significant association for personal achievement with moderate intensity (r = 0.127, p = 0.024) and overall physical activity (r = 0.113, p = 0.045). Meanwhile, the correlation between depersonalisation and emotional exhaustion was non-significant. A statistically significant association was found for depersonalisation with both gender (r = -2.411, p = 0.016) and study programme (r = 1.007, p = 0.001). Additionally, at least 40% of students suffered from at least one aspect of severe burnout, while 25.7% had low levels of physical activity. Both conditions were the most severe among Grade III students.

Conclusion: An association was found between physical activity and the personal performance component of burnout stress, indicating how low levels of physical activity will lower students' sense of satisfaction with their own personal accomplishments. This will lead to higher levels of stress when doing school-related tasks as they see their efforts as a student in vain.

Burnout is one of the consequences of severe cases of stress in which a person has physical and mental exhaustion with respect to specific activities, usually those related to his or her occupation. It is characterised as feeling drained, empty and burnt out due to an inability to cope with tremendous pressure.1 One population that is highly prone to burnout is medical students, as a meta-analysis of 183 studies from 43 countries found that the prevalence of depression in this group was 27.2%.2 A high level of burnout has been found to reduce an individual's productivity and health due to psychological and physiological effects. Many studies have shown that burnout decreases self-adequacy, sleep time and cognitive function and increases the risk of cardiovascular-related disease.3

Many studies have been undertaken to find ways to deal with burnout, and physical activity is one of the mechanisms. According to the World Health Organization (WHO), physical activity is any movement by skeletal muscles requiring energy expenditure.4 The medical student population is considered to have low levels of physical activity. This was shown by the Medical University of Silesia in Poland and the University of Malaya in Malaysia, which found that 26.0% and 24.4% of their medical students, respectively, had low levels of physical activity.5,6 Low physical activity, identified by the WHO as being physically inactive, is the fourth leading risk factor for global deaths, accounting for up to 6% of global deaths. Many countries have reported that being physically inactive is directly linked to non-communicable diseases.7,8

Sample size was calculated with a minimum of 316 samples in a 71% expected prevalence.10 Inclusion criteria were medical students currently completing their pre-clinical year. Students with inadequate Bahasa Indonesian skills or who did not complete the online questionnaire within 48 hours were excluded from the study.

The data was collected electronically. Three questionnaire included sociodemographic data, burnout stress level and physical activity level. The burnout stress level was measured with the Maslach Burnout Inventory: General Survey (MBI-GS), which was optimised for medical students. This questionnaire classifies burnout stress into three dimensions: depersonalisation, emotional exhaustion and personal accomplishment. Both depersonalisation and emotional exhaustion are increased in burnout patients, while the level of personal achievement is decreased. The level of physical activity was calculated using the International Physical Activity Questionnaire: Short Form. All questions have been translated to Bahasa Indonesian with Cronbach's alpha scores of 0.85 for both depersonalisation and emotional exhaustion and 0.83 for personal accomplishment.11

The data was analysed using SPSS version 20. The data was tested for normality and mean/median were tabulated to describe the variables based on each sample characteristic. Cross-tabulation was done correlation between physical activity and burnout stress level was established. A multiple regression test was performed to explain the sample characteristics. Additionally, a stratified analysis was conducted based on study programmes. To interpret and correlate burnout stress and physical activity level, a normality test was conducted by one-sample Kolmogorov-Smirnov test.

Overall out of the total 318 questionnaires 106 responses were equally divided for each grade in the pre-clinical year. More than half of the respondents were female (59.4%), and the mean age was 19 years (19.35±1.12). The study participants represented 22 different ethnicities, the most common being Javanese. Approximately 60% of the respondents follow Islam, and around 98% were unmarried. Additionally, a majority of the participants came from Jabodetabek region (Table-1). 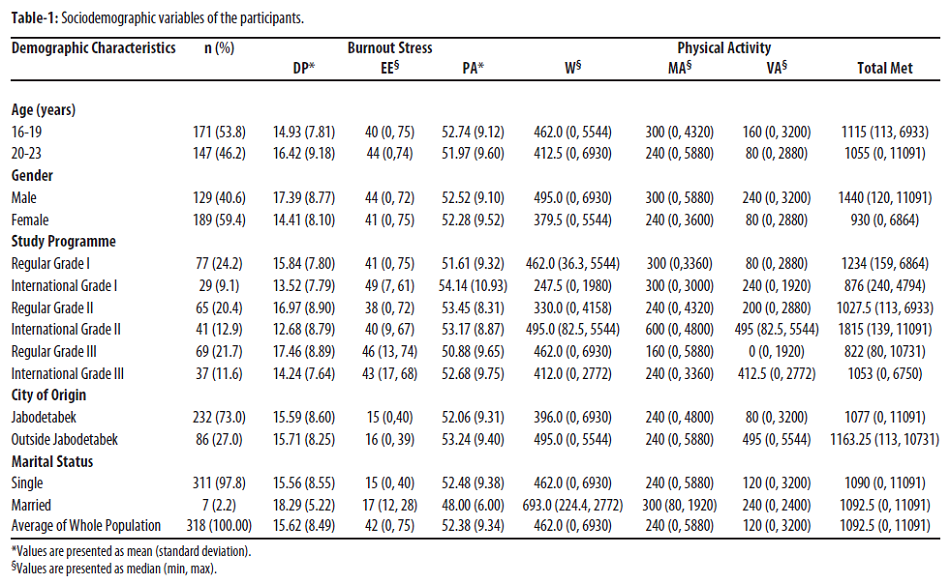 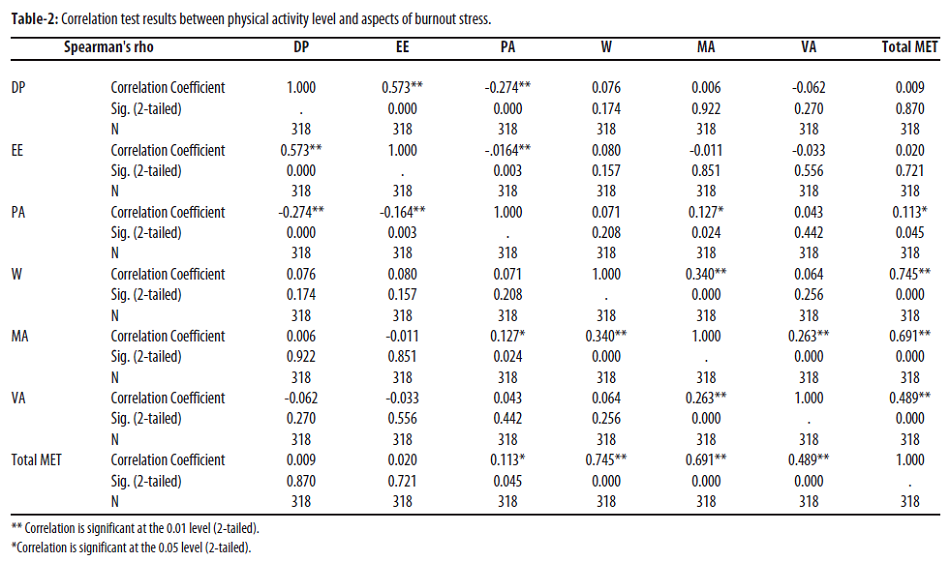 For each burnout component, a linear multiple regression test was performed to assess the effect of all factors examined on the dependent variable. Only depersonalisation was statistically significant (R2 = 0.045, p = 0.003), suggesting that around 4.5% of the population was influenced by this variable. In addition, in the depersonalisation factor, gender had the highest correlation (r = -2.411, p = 0.016), followed by study programme (r = 1.007, p = 0.001). All other values were statistically non-significant (p > 0.05).

The stratification of the study groups is shown in Table-3.

It can be seen that Grade III medical students have the highest overall burnout stress, with the highest depersonalisation (16.34) and emotional exhaustion (43.23) scores and the lowest personal accomplishment score (51.51). Grade I had higher levels of emotional exhaustion and lowered personal accomplishment in comparison to Grade II, but Grade II had a higher depersonalisation score.  Additionally, Grade III students were found to have the most severe burnout stress regarding all areas, in addition to the lowest level of physical activity. Moreover, the level of burnout stress was substantially higher for those with greater emotional exhaustion.

Based on the result of the sample characteristics, only five characteristics could be analysed: age, gender, study programme, city of origin and marital status. Both religion and ethnicity showed inconclusive trends due to a high diversity of responses, with six religions and 23 ethnicities.

Based on the Department of Health in Indonesia, the study participants were divided into two age groups: 16 to 19 and 20 to 23 years. This stratification was done to distinguish between the adolescent and adult groups. As far as burnout is concerned, it was found that the adult group had higher stress level across all aspects. As an adult, people appear to have more commitments and are worried for their future.  While this may be valid, it may not be the only factor, because age of the student is largely associated with their level of education. As the student reaches a higher grade, the complexity of their studies often increases, resulting in a higher workload and potentially higher levels of stress. However, the physical activity levels between the two showed similar values.

In this study, it was found that men had higher scores for depersonalisation and emotional exhaustion compared to women. However, the personal achievement scores between the two groups were identical. Thus, the result indicate that women have greater control of their emotions and are able to display more empathetically than to men. These findings may be attributed to females having higher emotional intelligence, making them better in emotional perception and expression.12 However, male students had better levels of physical activity, which is expected due to the general stereotyping. Despite this, studies have shown that women's health problems are less influenced by a lack of physical activity, especially in the case of cardiovascular, diabetic and cancer risks.13

There was no pattern between burnout or physical activity depending on the city of origin. Married couples have been found to have higher burnout stress levels. However, due to the limited sample size, this could not be confirmed in this analysis. The level of physical activity was comparable.

Overall, the data showed that the majority of pre-clinical medical students at Universitas Indonesia had moderate levels of burnout stress. These individuals are likely to be unaware of their condition. Since self-reflection is necessary to avoid further development, burnout sensitivity should be increased. Additionally, extreme severe cases of burnout have been reported in a number of students, and some very serious cases have occurred. According to the MBI-GS, these students need medical attention and support from their family and friends in order to ease their situation.

Grade III had the most severe conditions for both burnout and physical activity. This is possibly due to tough study materials, elevated workload and the longest period of exposure to academic stress. Grade I students showed more serious cases of emotional exhaustion and personal accomplishment compared to Grade II, which is believed to be due to cultural shock. However, depersonalisation was higher among Grade II, which may be attributed to the fact that Grade II had a longer prolonged exposure to academic stress than Grade I, decreasing their eagerness for and emotional interest in the study programme.

Based on the correlation analyses, no significant correlation was observed for either depersonalisation or emotional exhaustion with the amount of physical activity.  However, a statistically significant positive correlation was found between total physical activity and personal accomplishment score (r = 0.113, p = 0.045).  There are several theories that may explain this phenomenon. First, the release of endorphins, followed by a decrease in adrenaline and cortisol, one of the neurochemical effects of exercise. This secretion induces positive emotions within the body and is more pronounced in moderate-intensity exercise.14 This theory is confirmed by the positive correlation between total moderate physical activity and personal accomplishment (r = 0.127, p = 0.024). Another view is that exercise is linked to more positive reinforcement of self-image, thereby increasing the feeling of personal achievement.15

The strengths of this study were its large sample size, equal stratification between grades and the use of probability sampling. However, there were several limitations of the study, including cross-sectional study design, self-reported results, restricted research time and the lack of an officially translated questionnaire. In addition, while there was a positive correlation between physical activity and personal accomplishment, this study failed to find correlations between physical activity and the other two dimensions of burnout. This study was unable to predict the degree of impact of physical activity on each dimension of burnout, as the multiple regression test showed statistically non-significant results.

For further studies, using measuring instruments such as a pedometer instead of self-reported questionnaires may result in more reliable and comprehensive data regarding physical activity level. Finally, a re-evaluation of the MBI-GS questionnaire should be carried out in order to synchronise the score key with the original English version.

Acknowledgement: The pre-clinical medical students of Universitas Indonesia are duly acknowledged for their participation in this research.

Disclaimer: This paper represents the views of its authors, and does not necessarily represent the stance or opinion of Universitas Indonesia.