Objective: To analyse factors affecting the recurrence of TB in a tertiary hospital in Jakarta, Indonesia.

Methods: This is a hospital-based survey, located in Jakarta, in the period of January 2014 - December 2018. All patients with recurrent TB were included in the study, while the samples with successful treatment in the same period were chosen by consecutive sampling. Statistical analysis of clinical characteristics of both study groups was conducted.

Results: The medical records of 2322 TB patients who presented to Sulianti Saroso Hospital were analyzed retrospectively. Ninety-four cases of recurrent TB that met inclusion and exclusion criteria were included in the study. It was observed that factors affecting recurrence of TB were medication compliance (p = .007, odds ratio (OR) 0.38 [CI 95% 0.19-0.76]) and appearance of lung cavity lesions in the first thorax x-ray examination (p < .001, OR 0.08 [CI 95% 0.03-0.20]).

Conclusion: There was a relationship between recurrent TB and medication compliance and the appearance of lung cavity lesions in the first thorax x-ray examination.

Tuberculosis (TB) is the 9th most prevalent cause of death and one of the leading cause of mortality from singular infection, after HIV/AIDS.1 TB is caused by the bacteria Mycobacterium tuberculosis.1-4 This infection predominately occurs in the lungs, but can occur in other organs as well.3,5 TB can lead to various complications, including death, if not treated adequately. A study by the World Health Organization in 2017 reported that 1.6 million people expired annually due to TB who tested either negative or positive for HIV.6 Indonesia is ranked 3rd in TB prevalence with 8% of TB cases, below India and China.6 A survey conducted by the Indonesian Ministry of Health from 2013 to 2014 reported that the incidence of pulmonary TB in Indonesia was 403/100,000, while predicted prevalence was 660/100,000.7 By estimation, the Indonesian population in 2016 numbered around 250 million people, which indicates that there are an estimated 1 million new cases of TB each year and consequently, 100.000 new deaths. This data shows that Indonesia is facing an epidemic of pulmonary TB.7

In 2016, a regulation by the Indonesian Ministry of Health stated that TB is a public health issue that causes a lot of suffering, disability, and death and needs to be addressed.2 Indonesia aims to eliminate TB by 2035 and be free from TB by 2050.2 And yet, according to 2017 report, none of Indonesia's provinces has been able to achieve a case discovery rate above 70% and treatment success rate above 85%.8 The report did not state whether or not a TB patient considered as successfully treated was compliant to the use of anti-TB drugs. Therefore, there has been no actual report regarding recurring TB despite the high rate of recurrence. A study stated that data of recurring TB is between 47%-49%.8 The most recent data from the Indonesian Ministry of Health in 2017 shows that reported new cases of TB numbered 364,760 with 12,147 recurring cases, totalling 376,907 cases including positive mycobacterium tuberculosis (MTB), negative MTB, and extrapulmonary TB.3 Cases of recurring TB patients contribute towards the high incidence of TB.

One of the main obstacles in treating TB is the absence of a consistent provision of TB treatment with good standards regarding the monitoring and compliance. There is a necessity to study characteristics (age, gender, HIV, diabetes mellitus (DM), nutrition, miliary TB lesions, lung cavity lesions, and MTB status) of patients who were treated at Sulianti Saroso Hospital, a tertiary care hospital in Jakarta, Indonesia, with reference to the statistical rise of new cases of TB and cases of recurrent TB.9,10 Thus, we undertook this study to identify factors affecting recurrent TB so that medical doctors could treat TB more holistically and reduce recurrent cases.

This was a hospital-based survey analysing patient characteristics of recurring TB cases at Sulianti Saroso Hospital. Secondary data from medical records of patients with non-recurring TB who visited the hospital between 1st of January 2014 to 31st December 2018 were also analyzed. We collected medical records of the patients based on inclusion and exclusion criteria as follows:

Inclusion Criteria: a. Adults (age > 18 years) inpatient and outpatient with recurring TB, confirmed by a positive specimen culture or strong clinical evidence, which was treated with anti-TB medication and the patient had been declared free of TB or completed an anti-TB regiment at least 6 months prior to recurrence.

b. Adult (age > 18 years) inpatient and outpatient with non-recurring TB, confirmed by a positive sputum acid-fast bacilli stain or strong clinical evidence, which was treated with anti-TB medication and the patient had been declared free of TB or completed an anti-TB regiment at least 6 months earlier.

Exclusion Criteria: were, incomplete medical records, severe comorbidity, such as sepsis or cancer and transfer of patient.

The target population of this study was adult patients with non-recurring TB and recurring TB. TB was confirmed with positive sputum acid-fast bacilli stain or strong clinical evidence.

The sample size was calculated, using the formula for analytic categorical study, with the minimal number of samples needed for each group being 50.

All patients' data were protected for confidentiality. This study was reviewed and approved by the Sulianti Saroso Hospital Health Research Ethics Committee (No 65/XXXVIII.X/XI/2018).

There were 2322 sets of TB patient's data collected at Sulianti Saroso hospital between 1st of January 2014 and 31st of December 2018. The collected samples were then consecutively placed into non-recurring TB and recurring TB groups, with each group containing 94 samples.

Univariate analysis was performed on clinical variables as treatment compliance, HIV status, lung cavity lesions and miliary lesions from each group and the result is shown in Table-1. 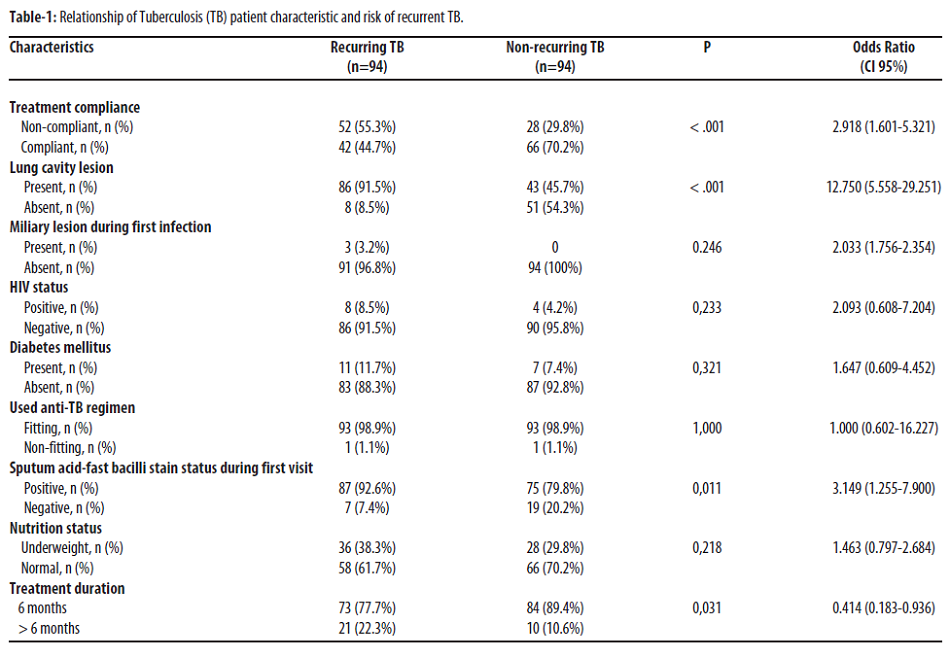 Bivariate analysis was conducted between 2 categorical variables using the Chi-square Test or Fischer Exact Test to determine the correlation between patient's clinical characteristics and recurring TB incidence. The Chi-square test was applied for treatment compliance, lung cavity lesions, Diabetes Mellitus, and nutrition status, while the Fisher Exact Test was used for the rest of the clinical characteristics, such as age, gender, HIV, miliary TB lesions, and sputum acid-fast bacilli stain status.

Multivariate analysis was conducted using logistic regression (LR) to determine which factors have a significant relation to the increase of recurrent TB incidence at Sulianti Saroso Hospital. The factors analysed were: treatment compliance, lung cavity lesions, sputum acid-fast bacilli stain status on first visit, and treatment duration, and were chosen from factors that showed p < 0.2 in bivariate analysis. The result of the LR is shown in Table-2.

Only treatment compliance and lung cavity lesions before treatment showed significant relation (p < .05) to the increased risk for recurring TB.

The result of the multivariate analysis revealed that only treatment compliance and lung cavity lesions had a significant relation (p < .05) with the increased risk for recurring TB, while sputum acid-fast bacilli stain status on first visit failed to show a relation.

This result differs from a previous study conducted in Semarang in 2015, which found that patients' sputum acid-fast bacilli stain status during their first visit is one of the factors predicting TB recurrence.11 On the other hand, this result is similar to a study conducted in India in 2005, which found that positive sputum acid-fast bacilli stain status is not one of the factors predicting recurring TB.12

Of the 194 patients included in this study, 80 (40%) showed bad compliance with the TB treatment, as reflected by the failure to regularly collect medicines every month. Of these 80 patients, 52 were in the recurring TB group and 28 were in the non-recurring TB group. This finding highlights a dangerous situation-failure with treatment compliance is one of the major factors influencing the success of treatment.12 This infers that if a patient does not collect the medicine regularly, they most likely take the medicine irregularly. In this study, we were unable to deduce the reason behind the failure of compliance. It may be caused by the side effects of the drugs, the patient feeling better, or economic factors.

Lung cavity lesions shown on a patient's first chest X-ray proved to be the factor with the highest risk for recurring TB in this study, with 12.75 times higher risk compared to patients without lung cavity lesions. This data needs to be analysed carefully, considering that lung cavity lesions are a general clinical diagnosis for TB. The lung cavity mentioned in this study is an empty space formed in the lung parenchymal tissue due to damage of the lung tissue, most commonly in the alveolus. The cavity is a signature feature of post-primary TB, and is characterized by a circular hollow space with an irregular wall thickness which is radiolucent and without a lung pattern. No other study in Indonesia could be found relating lung cavity lesions with recurrent TB. Although, the cavities develop a smooth, thin wall thickness with successful treatment, further studies are needed to determine what is left in the cavity after complete TB treatment. This study showed that lung cavity lesions are an important factor in diagnosing TB, and provided information that more evaluation of lung cavities is needed regarding the risk of recurrent TB. Patient's clinical characteristics and compliance is important for clinicians in providing effective treatment.

The weakness of this study is that there could be patient selection bias since the data was collected from Sulianti Saroso Hospital, a referral hospital for TB and recurring TB. There could be an overestimation of recurring TB incidence, therefore the result could not be applied to the general population. There were also some missing data that could have prevented a complete recapitulation of the medical records.

This study found that in Sulianti Saroso Hospital, there was a correlation between recurring TB and treatment compliance, as well as lung cavity lesions in the first visit before start of treatment. Further studies are needed, preferably a cohort study, to understand more about the importance of lung cavity lesions, so that TB treatment can be more effective and recurrent TB can be further prevented.

Funding Disclosure: We thank DRPM Universitas Indonesia for the financial support for this study.

Disclaimer: The result of this study has been presented in Malaysia Indonesia Brunei Medical Sciences Conference 2019 and a part of thesis of Clinical Pharmacology Specialist Programme.

12.    Rukmini R, Chatarina UW. Factors that influence the incidences of adult tuberculosis cases in Indonesia. E-Journal of the Ministry of Health Research and Development 2011;14:320-31.