Objective: To determine the association between fat and vitamin E intake with quality of life in patients with pulmonary MDR-TB.

Methods: This was a cross-sectional study conducted at Dr. M. Goenawan Partowidig do Hospital, Cisarua, Indonesia, from April to May 2019. Ninety-two patients were enrolled in this study. Fat intake was assessed using 24 hours food recall, vitamin E intake was assessed using a semi-quantitative food frequency questionnaire (FFQ), and quality of life was obtained by a short form 36 questionnaire (SF 36). Data were analyzed using Pearson and Spearman correlation test.

Conclusion: There is a significant association between fat and vitamin E intake with quality of life among pulmonary MDR-TB patients. Further research is needed to evaluate the intervention by modifying food intake and giving vitamin E to MDR-TB patients.

Tuberculosis (TB) is a global problem that is still unresolved and ranks in the top 10 causes of death in the world.1 WHO's 2018 report stated that an estimation of 10 million people was affected by TB in 2017, and two-thirds of them were reported from 8 countries, including Indonesia. Indonesia ranked third with the most TB cases in the world.2 In 2018, West Java was a province with a high prevalence of pulmonary TB, which is 0.6%.3 Other health problems that arise from TB are TB resistance, including multidrug-resistant tuberculosis (MDR-TB).1 Multidrug-resistant TB is TB that is resistant to both rifampicin and isoniazid.4 Multidrug-resistant TB cases in Indonesia have increased, and the WHO Global Tuberculosis Report 2018's data showed that Indonesia is one of the 20 countries having the highest number of cases of MDR-TB in the world.2,5

In TB patients, there was an increase in the production of reactive oxygen species (ROS) and decreased antioxidants in the body. Therefore, oxidative stress will occur due to an imbalance between the production of ROS and antioxidants.6,7 Vitamin E is a fat-soluble vitamin and the most potent lipophilic chain-breaking antioxidant. Among all forms of vitamin E compounds, a-tocopherols has a high biological activity.8 Research conducted by Pratiwi et al. showed that there was a significant low correlation between vitamin E intake with lung function, and there were no subjects that met the vitamin E requirements according to the RDA.9 Ingredients that are rich in fat can increase the absorption of vitamin E in the intestine.10,11 Fat is one of the food components that has many essential functions in life. The functions of fat in the body as an energy source can produce twice as much energy as carbohydrates and proteins. Furthermore, fat is the part of cell membranes, a mediator of biological activity between cells, insulators in maintaining body temperature balance and act as a suspension for fat-soluble vitamins.12 In TB patients there is an increase in energy needs that can reach 10-30% of the energy requirement by healthy people.13

It was reported in some studies that most of the MDR-TB patients have poor nutritional status, with BMI <18.5 kg/m2. Low food intake and poor nutritional status could slow down the occurrence of sputum conversion in MDR-TB patients.7,14 The WHO Global Report 2018 reported that the percentage of successful therapy in MDR-TB patients in Indonesia was still low, less than 50%. The low percentage of successful MDR-TB therapy in Indonesia is caused by a high percentage of death and loss to follow up, respectively, 16% and 31%.2 MDR-TB patients will undergo complex and prolonged treatment, experienced many drugs' side effects, and their work will also be disrupted. This will certainly reduce the quality of life in MDR-TB patients.15 The purpose of this study was to find out the association between fat and vitamin E intake with total quality of life score in patients with pulmonary MDR-TB.

This cross-sectional study was performed in April-May 2019 at a multidrug-resistant tuberculosis clinic, at Dr. M. Goenawan Partowidigdo Hospital, Cisarua, Indonesia. This study was approved by the Medical Ethics Committee of the Faculty of Medicine, Universitas Indonesia. The sample size calculated using the correlative analytic formula with r 0.3 and a 0.05 was 86 patients. By adding non response rate about 10%, the total number of samples in this study amounted to 95 patients. Enrolled were 92 patients who had a complete data. The research sample was obtained using consecutive sampling method. The subjects were still in the intensive treatment phase with ages ranging from 18 to 59 years. The characteristics of the study subjects noted were age, gender, education level, income, and body mass index (BMI). Data were collected from interviews and anthropometric measurements. Total energy, protein, and fat intake were obtained using the 24-hours food recall which was taken only once, and vitamin E intake using the semi-quantitative FFQ. Quality of life was assessed by using a short form with 36 questions (SF 36). The daily dietary intake of total energy, protein, fat, and vitamin E was calculated for each subject in a dietary analysis programme Nutrisurvey 2007.  Kolmogorov Smirnov test was used to examine the data distribution. Pearson and Spearman correlation test were used to analyze the correlation between fat intake and vitamin E. All statistical analyses were conducted using SPSS version 20.0, and statistical significance was considered at p < 0.05. 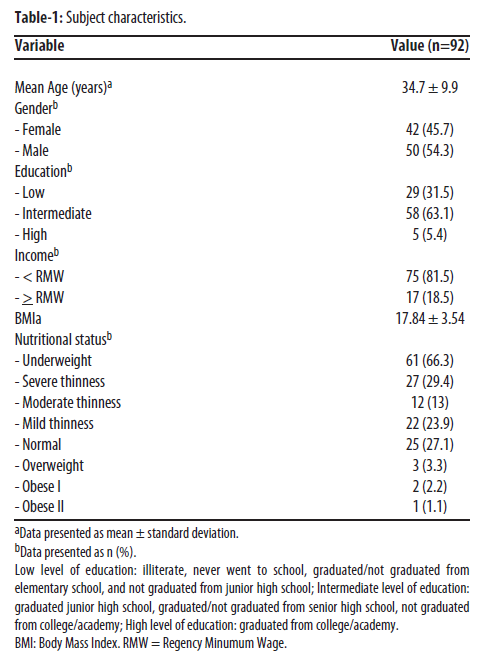 Table-1 shows the mean age of the subjects in this study to be 34.7 ± 9.9 years. The numbers of male subjects were slightly more than female subjects, but with no significant difference. More than 46 (63.1%) subjects in this study had intermediate education, while others having junior or senior high school education. There were 75 (81.5%) subjects with an income below the regency minimum wage (RMW),16 and 46 (66.3%) subjects were underweight (BMI <18.5 kg/m2), and 27 (29.4%) of them classified as severely underweight.

The mean age of the subjects in this study was 34.7 ± 9.9 years classified as a productive age. Tuberculosis and MDR-TB patients with productive age have high rates of transmission to others and have low medication adherence due to high work mobility.17 This study also showed that the numbers of male subjects were slightly higher than the female subjects. This might be caused by male subjects having more activities outside the home, which made them more prone to be in contact with people with TB or MDR-TB. Likewise, male subjects were considered having unhealthy lifestyles such as smoking and drinking alcohol.17 However, Sarwani et al. found that gender was not a risk factor for MDR-TB because both genders had the same risk of exposure.18

There were 58 (63.1%) subjects with intermediate education level or those who had completed junior and senior high school education. However, the research conducted by Sarwani et al. showed that education level was not a risk factor for MDR-TB.18 This might be because people with low education did not necessarily have little knowledge about TB, and people with high education did not necessarily have extensive knowledge about TB. Nowadays, there is a large amount of information about TB found in electronic and print media. In this study, 75 (81.5%) subjects had income below the RMW. The cause of low income could be attributed to reduced working hours or giving up work during the treatment period.

The mean BMI of the subjects in this study was 17.8 ± 3.5 kg/m2, and 61 (66.3%) of them were underweight, with 27 (29.4%) being classified as severely underweight. Aristiana et al. showed that subjects with underweight nutritional status had a higher risk of developing MDR-TB.19 Another study conducted by Putri et al. concluded that people with MDR-TB with BMI < 16 kg/m2 or were severely underweight, took a longer time for the initial conversion of sputum.14

In this study, the mean intake of vitamin E was 4.6 ± 2.7 mg/day, and no subject could meet the vitamin E requirements based on the RDA, which was 15 mg/day. Vitamin E is found in many vegetable oils, such as sunflower seed oil, wheat oil, and safflower oil, which are rich in a-tocopherol. These oils are not commonly consumed among the subjects in this study because of their high prices. The form of vitamin E that has high activity in the body is a-tocopherol.10 The cooking oil commonly used by subjects in this study was palm oil. Palm oil contains 30% tocopherol, and the rest are tocotrienols, which have lower bioavailability than a-tocopherol. The content of vitamin E in palm oil starts degradation at temperatures of 210°C-278°C.20 It was also found that the subjects' total quality of life scores in this study was 47.18±14.98, with 62% having a total quality of life score below 50, which is relatively low.

In this study, there was a significant low correlation between vitamin E intake with total quality of life score. Tuberculosis patients have been reported as having increased oxidative stress and decreased concentrations of antioxidants in the body.21,22 Alli et al., in their study, found a significantly increased level of malondialdehyde (MDA) and decreased levels of a-tocopherol in rifampicin-resistant patients compared to TB sensitive patients.23 Malondialdehyde is the result of lipid peroxidation and one of the markers of oxidative stress.7 In Thanoon et al.'s study, there was a greater decrease in MDA levels and an increase in total antioxidant status (TAS) in people with TB who were given anti-TB treatment added with vitamin E supplements compared to those in the group that were only given anti-TB treatment.24 Vitamin E is the most potent lipophilic chain-breaking antioxidant and can reduce oxidative stress that occurs in patients with TB and MDR-TB.8,24 Aibana et al.'s study found that a-tocopherol deficiency had an increased risk of TB incidence.25 In a study conducted by Kavitha et al. showed significant improvement in the quality of life in TB patients receiving anti-TB treatment.26 It is hoped that increasing vitamin E intake can reduce oxidative stress and improve the quality of life in MDR-TB patients.

There was also a significantly low correlation between fat intake and total quality of life score. Multidrug-resistant TB patients require adequate fat intake due to an increase in energy requirements. Fat has a critical role as an energy source and also to increase the bioavailability of vitamin E in the body.12,13 It was expected that adequate intake of fat could help enhance the absorption of vitamin E in the body, to improve the quality of life in MDR-TB patients.

The limitation of this study was that 24-hours food recall could only be done once. This was due to the subjects' weak condition, the location of the subject's house was far from the hospital, and the need for transportation cost to the hospital. Further research is needed to evaluate the intervention by modifying food intake and giving vitamin E to MDR-TB patients.

Disclaimer: This manuscript is the part of a thesis.

Conflict of Interest: none to declare.

Funding Disclosure: none to declare.