Objective: This objective of this study was to measure the performance of the identification of the seniors at risk (ISAR) tool and triage risk-screening tool (TRST) for frailty screening in elderly emergency room (ER) patients.

Methods: A cross-sectional study involving subjects aged 60 years or older was conducted at Cipto Mangunkusumo General Hospital ER from September-November 2018. Frailty was defined by the Forty Item Frailty Index (FI-40). The ISAR and TRST performance were measured as sensitivity, specificity, positive and negative predictive value (PPV and NPV), positive and negative likelihood ratio (LR+ and LR-) and the area under the curve (AUC).

Elderly visits to the ER often result in a decrease in health status and function; thus, adequate assessment and management is needed for this population.1 The elderly population is diverse, often with multiple comorbidities, atypical clinical presentations and an increased prevalence of cognitive impairment, with more comprehensive evaluations and greater resources than those available for the younger population.2

Frailty is an unfortunate outcome predictor for increased mortality and risks of morbidity, including repeat visits, hospitalisations and decreased function.3-5 The prevalence of frailty in ER patients varies from 7% to 80% depending on the instrument used.4 Frailty is defined as a transitional dynamic physiological condition such that an individual is very susceptible to stressors and has difficulty maintaining homeostasis during stress exposure due to decreased physiological reserves and multiple physiological system dysregulations. There are two approaches to detect frailty: phenotyping and indexing. The index approach to identify frailty has advantages when it comes to differentiating the risks associated with poor outcome, although it has more things that need to be measured and it is difficult to translate clinically as compared to the phenotyping approach.6-9

The FI-40 is an instrument containing 40 index -based approaches developed from a secondary analysis of the Canadian Study of Health and Aging (CSHA) that showed that frailty was strongly correlated with survival.10 Although it has good performance when identification of frailty, the FI-40 cannot be applied to ER settings because it takes a very long time to complete, whereas ERs requires rapid and timely evaluations and treatment. There is therefore a need for a simple, easy, fast and accurate instrument to screen patient Frailty in ERs.

ISAR tool is a 6-item questionnaire developed in Canada to predict poor outcomes for high-risk elderly patients visiting ERs.11 TRST was developed in the United States as a screening tool to stratify high-risk ER elderly patients. This instrument consists of six questions completed on the basis of triage care observations.12 ISAR and TRST, as prognostic instruments were tested in, among other countries, Canada, Germany, Switzerland, the United States and the Netherlands. Which showed moderate prognostic performance.13-17 The previous study showed that ISAR and TRST only moderately predict mortality among our population.18 However, there are very limited reports on the use of ISAR and TRST as ER frailty-screening tools. This aim of this study was to evaluate the performance of ISAR and TRST in screening frailty patients in ERs.

A cross-sectional study was conducted on 471 consecutively-recruited subjects aged 60 years and older who visited Cipto Mangunkusumo General Hospital ER between September and November 2018. Calculation of sample size used the formula for adequate sensitivity in the diagnostic test with 95% confidence level, and the maximum marginal error of estimation (d) did not exceed 15%.19

Subjects with decreased consciousness, significant visual impairments, significant hearing impairments, significant communication impairments and who were illiterate and without an informant were excluded from the study. The informant refers to a person who has been aware of the patient's health for the past year. Forty-five subjects refused to participate, and six subjects without informants were excluded from this study. Ethical clearance from the Universitas Indonesia Ethics Committee (0827/UN2.F1/ETIK/2018) and sampling site permit from the Cipto Mangunkusumo General Hospital Research Committee (LB.02/2.2.1/0803/2018) were obtained for this study.

Trained medical enumerators recruited participants in the ER within the first 8 hours of their arrival by study protocol. Participants and/or informants who had received information and were willing to be included in the study then signed an informed consent document. The FI-40 and TRST documents were completed by enumerators on the basis of interviews and observations, while the subjects and/or informants completed the ISAR documentation. Sociodemographic data, comorbidities, treatment history and completion of the ISAR, TRST and FI-40 tools were recorded in the study worksheet.

A subject was defined as having frailty if it had a score of > 0.25 as assessed using the FI-40 instrument.7 The ISAR and TRST instruments were positive if the subject had a score of 2 or more.11,12 Sensitivity, specificity, PPV, NPV, LR+ and LR- were calculated. The AUC was derived from the sensitivity plot the false positive rate from all possible intersections. Data Analysis were made using STATA software version 15.1.

The subjects had a median age of 66 years (range 60-95 years), and were mostly in the 60-69 age group. Two-hundred sixty-two (55.6%) were male. Almost all of subjects used national health coverage/Jaminan Kesehatan Nasional (JKN) in the ER (Indonesian version of universal health coverage). According to the FI-40 score, the frail subjects accounted for 386 (82%) of the subjects studied. Characteristics of the subjects are shown in Tables-1 and 2. 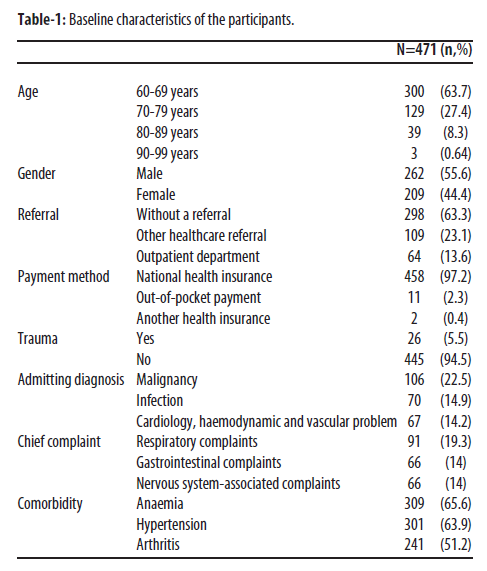 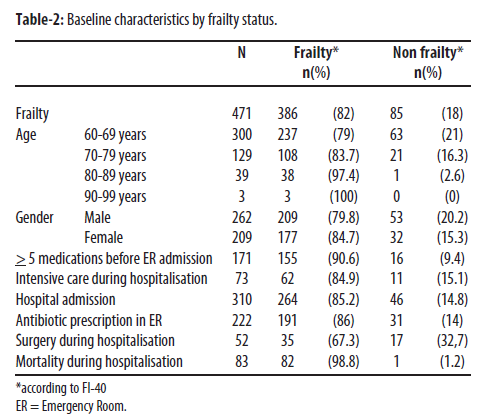 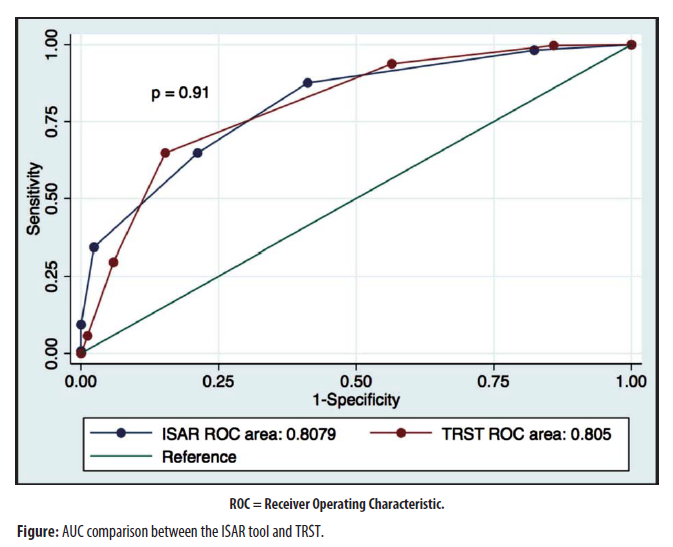 Subjects in this study had a lower median age relative to other countries due to the fact that subjects were recruited at a younger age (60 years of age).13-17,20,21 The larger number of subjects classified as frail in this research was likely due to the fact that the subjects were recruited from a national referral hospital and thus had more complex illnesses. Similar findings have also been published in other countries.13,20,21

In our research, the ISAR tool showed very good frailty-screening efficiency in ER patients. A similar result was also reported in a study conducted in a tertiary hospital ER in Italy where 200 participants aged 65 years or older who visited the ER were evaluated retrospectively by evaluating and comparing their ISAR performance with the Deficit Accumulation Index (DAI) as the gold standard for frailty assessment. In the Italian study, the frailty proportion was 58.5%, and the ISAR was found to have an AUC of 0.92 (95% CI [0.88, 0.96]) at all possible intersections, and at intersection 2, the ISAR had a sensitivity of 94% and a specificity of 63%.21

The use of the TRST as a screening tool for frailty has been recorded in Belgium based on a study of 937 subjects aged 70 years or older with cancer who have been admitted to the hospital.22 The study found a frailty proportion of 73.5%, and compared with Geriatric Assessment (GA), TRST at intersection 2 had a moderate performance with 67.2% sensitivity, 79.8% specificity, 90.3% PPV, 46.7% NPV, a LR+ of 3.33, an LR- of 0.41 and an AUC of 0.74.20 Nearly 1/3 of our subjects had some sort of malignancy (137 subjects, 29.1%) and almost 1/4 of our subjects came due to malignancy-associated complaint (106 subjects, 22.5%).The TRST showed very good frailty-screening results in the ER in the present research.

The high proportion of frail elderly patients attending the ER demonstrated the importance of regular early identification of frailty patients. Integrated geriatric service in ERs — starting with detection of frail patients and accompanied by further assessment and treatment has been reported to reduce bad outcomes.4,23 A Singapore study showed that risk stratification followed by early intervention for elderly ER patients could reduce repeat visits, reduce hospitalisation rates and maintain patient function for 12 months.24,25 A Hong Kong report also showed that community nurses may have a role to play in reducing the number of repeat visits to the ER due to falls.26

The limitation of this study lies in the fact that it was conducted at only one ER in a tertiary hospital in a large city and therefore may have different subject profile compared to other hospitals and other cities. Further studies are needed to identify effective alternative interventions that could reduce poor outcomes for frail elderly ER patients.

Both the ISAR and TRST tools have a very good and equal frailty-screening performance for ER patients. Either the ISAR or TRST tool could be used by ER nurses or qualified healthcare professionals as a frailty-screening tool without greatly adding to their workload. Early detection of frailty, followed by further assessment and intervention, is expected to reduce poor outcomes in elderly ER patients.

Acknowledgement: The authors would like to thank Mahardhika Kartikandini, Yuscha Anindya, Farrah Putri Amalia for their contribution in data collection

Disclaimer: The study was presented as a poster in the 11th Malaysia Indonesia Brunei Medical Science Conference 2019.

Conflict of Interest:  None.

Funding Disclosure: The study was supported by a research grant from Universitas Indonesia.