Objective: This study aimed to investigate osteoporosis knowledge and bone health practices among students of a Malaysian public university

Methods: A cross-sectional study was conducted amongst university students from a Malaysian's public university. A total of 228 students responded to a self-administered questionnaire consisting of items evaluating knowledge and practices of osteoporosis.

Conclusion: The students had a reasonable levels of knowledge about osteoporosis, but their health activities to avoid osteoporosis were insufficient. This illustrates the need for educational programmes to improve students' knowledge and awareness for successful osteoporosis prevention.

Bone growth during adolescence is a strong determinant of lifelong skeletal health, as the greatest deposition of bone occurs during this period.1 Preventive interventions should therefore begin early to prevent osteoporosis in later stages of life. Since knowledge may be one of the factors leading to good practices in bone protection, assessment of knowledge regarding osteoporosis among the younger population is important in the planning of osteoporosis prevention strategies. A recent systemic review has shown that knowledge of osteoporosis and good bone protective practices among the younger population remains low in many countries.2

Previously, Nadiah et al. found that female undergraduate students in a Malaysian health campus were more experienced than males in osteoporosis prevention activity and had higher calcium intakes.1 Male students were more physically active but had a higher intakes of caffeine and carbonated beverages.1 The sample size of this study was fairly small and did not include all three races (Chinese, Malay and Indian etc) of Malaysia. Khan et al. researched senior-year students of a Malaysian public university9 and found that female students were more knowledgeable than males in bone health and that Chinese students had higher scores of knowledge and practices regarding bone health compared to other races. However, this study did not assess physical activity, a significant determinant of bone health among the students.

In order to address the research gaps in this area, a study was conducted to assess the awareness (on disease and prevention) and practices of osteoporosis among students of different ethnic groups at a Malaysian public university. The objective of the study was to highlight the level of knowledge and practice of younger Malaysians regarding osteoporosis and to identify areas to improve their bone health.

A cross-sectional study of students at Universiti Kebangsaan Malaysia was conducted from January 2018 to March 2018. Calculation of the sample size was based on the formula n = [Z2 × P (1-P)] / d2, whereby Z is for confidence level at 95% (value = 1.96), P is the proportion of students with the correct understanding of the definition of osteoporosis (value = 0.87, derived from the study of Khan et al.9) and d is the precision level (value = 0.05). The total sample size estimated was 226, assuming that 30% of the questionnaires were incomplete / unusable. The Malaysian foundation or undergraduate students of the university who were able to complete the questionnaire were recruited using purposive sampling method. Postgraduate students and foreigners were excluded. An invitation along with the link of the questionnaire were sent via email. Written informed consent was obtained from participants prior to their inclusion in the study. The study protocol was reviewed and approved by the Research Ethics Committee of Universiti Kebangsaan Malaysia (approval code: UKM PPI/111/8/JEP-2017-812).

The subjects replied to a self-administered questionnaire on their socio-demographic data, awareness and activities related to bone health and osteoporosis. The demographic information included sex, age, ethnicity, marital status, educational status and course currently enrolled. The medical history of the subjects and the medications/supplements used were also complied. The subjects' knowledge of osteoporosis was assessed using an adapted version of OPAAT which was validated previously.10 It consisted of 30 questions addressing the basic knowledge of osteoporosis (11 questions), its complications (5 questions) and its prevention (14 questions). One point was given for a correct answer to each question, and no point was given for an incorrect answer or when the subjects indicated that they did not know the answer.

The participants also revealed their smoking behaviour, consumption of beverages and intake of dairy and soy-based foods. The beverages investigated included (1) coffee or tea (caffeine-containing beverages), (2) carbonated beverages, (3) cow's milk, (4) soy milk and (5) alcohol (beer, wine or spirits). For beverages, an intake of less than 1 unit per week was described as non-drinker. One unit of milk (cow's milk, soy milk) was defined as 200 mL, while coffee/tea was defined as one regular coffee/tea cup. An alcohol unit was established according to the recommendation of the National Health Service, UK.11

The physical activity status of the subjects was calculated using the International Physical Activity Questionnaire (IPAQ) (short form) previously validated in Malaysia.12 Participants noted the total time spent in high-intensity activity, moderate-intensity exercise, walking and sitting / lying down activities (except sleeping) in a week. Such data were translated to a metabolic equivalent of task (MET) and was summed up. Subjects were graded as inactive, minimally active, or health-enhancing physical activity (HEPA) on the basis of the total MET score or other additional criteria.13

The variables of interest were expressed as mean and standard deviation (SD), or percentage and frequency. The normality of the data was determined by the Kolmogorov-Smirnov test. The Mann-Whitney U test was used to assess the differences of knowledge based on characteristics of the subjects (sex, course enrolled in, diet and lifestyle practices). Knowledge among different ethnic groups was analyzed using the Kruskal-Wallis test. The associations between subjects' characteristics and diet or lifestyle practices were evaluated using chi-square test. Statistical analysis was done using IBM SPSS Statistics version 22 for Windows (IBM, Armonk, NY, USA) and statistical significance was set at P < 0.05. 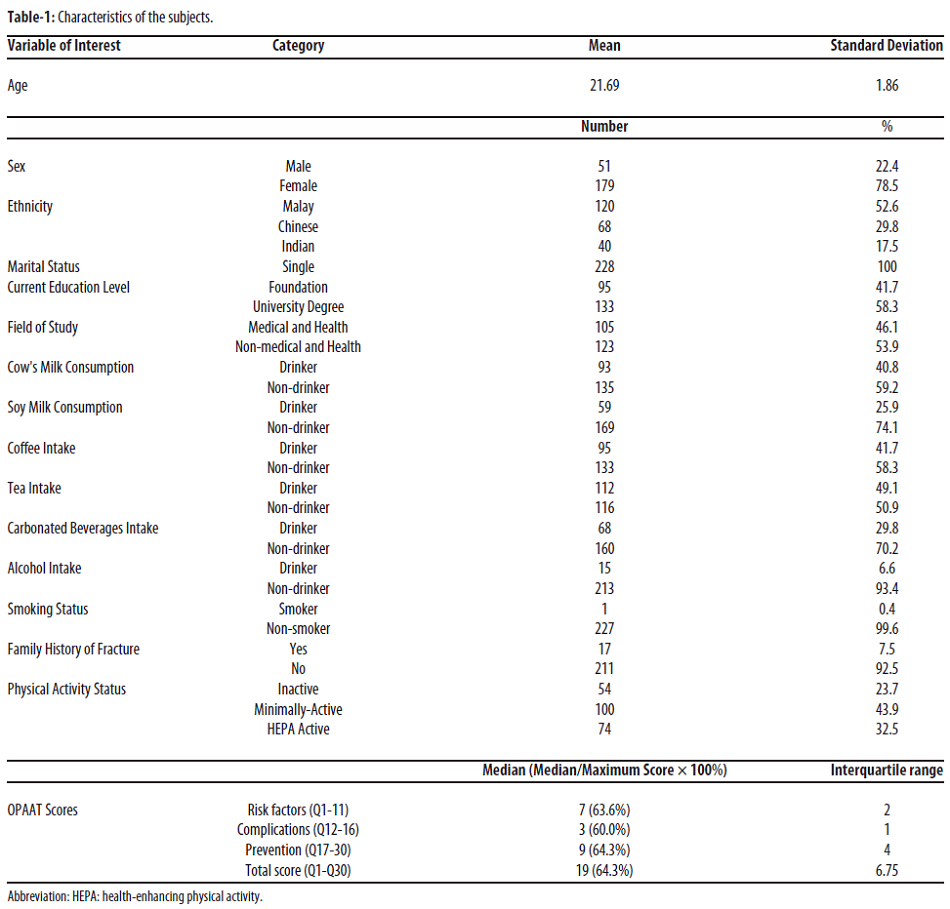 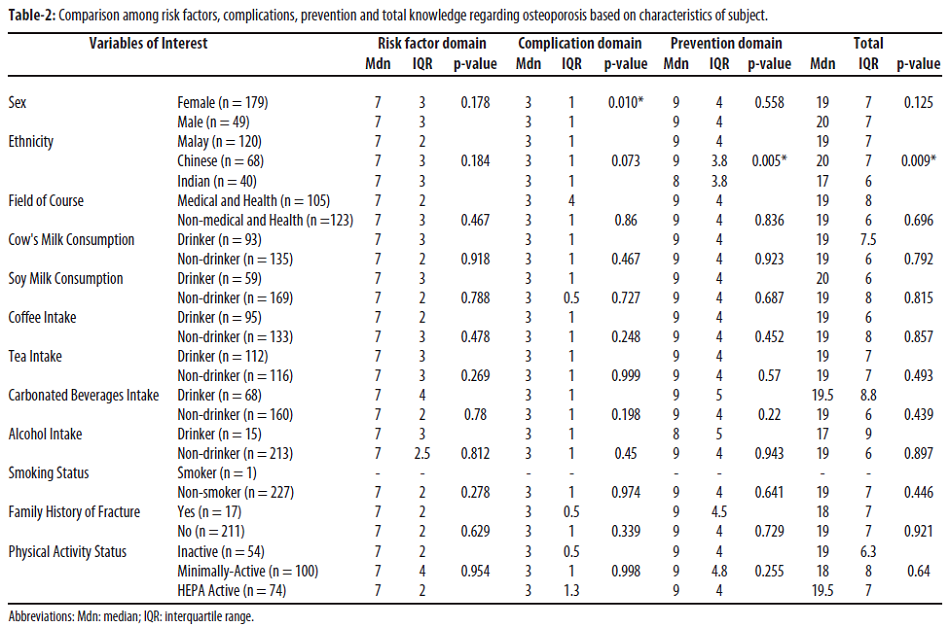 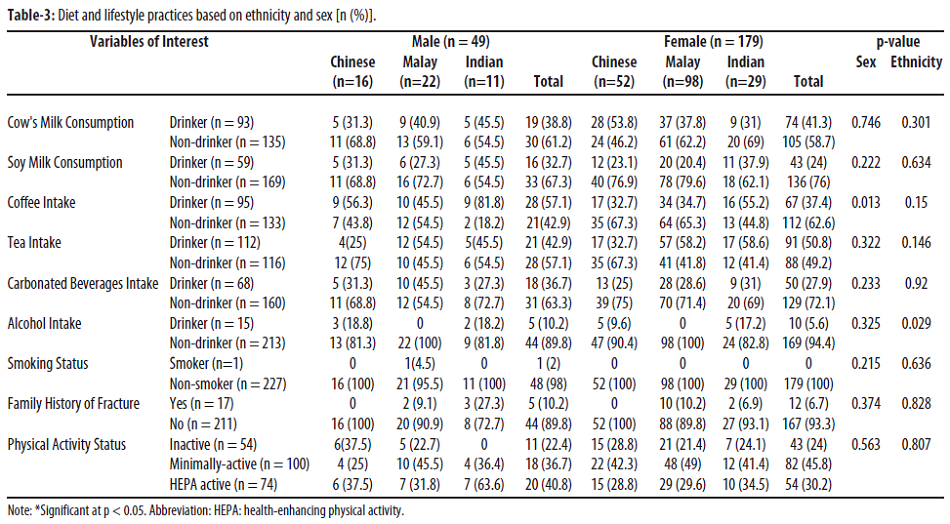 The participants of this study had moderate levels of osteoporosis awareness. This result was consistent with studies conducted among undergraduate students from other countries.14,15 Other studies showed an even lower osteoporosis knowledge level among university students,4,8 but this could be due to the inclusion of new entrants with limited osteoporosis knowledge. On the other hand, senior health and nursing students have shown a higher degree of competence due to health promotion and primary care concepts that have been learned and applied during the course.9,16

Knowledge of risk factors for oesteoprosis among the participants was considered moderate in this research. Specifically, less than a quarter of the students knew that osteoporosis had no symptoms, while only half of the study population acknowledged that osteoporosis was a treatable disease (supplementary material, Table S1). Lack of understanding of risk factors for osteoprosis has been commonly reported among young adults and students.1 In comparison, the students in this sample have shown a moderate level of knowledge of osteoporosis risks.  Most students did not know osteoporosis will not cause joint pain or swelling of the fingers. As a result, subjects could have confused osteoporosis with osteoarthritis. This highlights a need to increase osteoporosis knowledge of osteoprosis among younger generation on this issue. Interestingly, male students in this study were more educated about osteoprosis complications than females students . This contradicted another pervious study which reported that female students understood osteoporosis better than males.8 Since the source of information was not studied, it is not clear how and where the male students learned about osteoporotic complications. Both the domains of risk factors and complications should be highlighted in future osteoporosis prevention programmes aimed at younger populations to address knowledge deficiency.

Malay and Chinese students had significantly higher levels of awareness on prevention of osteoporosis compared to Indian students. This might be attributable to the ethnic differences in vulnerability to osteoporosis. Most students were aware of the use of calcium supplements to avoid osteoporosis, and were aware of the dietary sources of calcium. However, in the field of prevention, this knowledge did not translate to action, as less than half of them consumed cow's or/and soy milk. Previous studies have shown that the purpose for not consuming dairy and soy-based products among the younger populations might be due to aversion to the taste of dairy products,21 lack of motivation on the part of their parents22 or lack of access to calcium-rich foods on campus. Also, most students did not practice proper diet and lifestyle to improve bone health. In this study, more male students drank coffee compared to females, confirming Nadiah et al's observation of Malaysian students.1 Malayan students did not use alcohol for religious reasons, while Chinese and Indians often consumed alcohol.23 Physical activity is an important determinant of bone density, but a large proportion of subjects in this study were not physically active. This may be due to lack of awareness, cultural background, insufficient contact with healthcare professionals and lack of dialogue on prevention of osteoporosis with educators, healthcare providers and parents.24 This finding was comparable to previous research conducted among university students and the general population, which found that younger generations are less engaged in regular exercises.4 Therefore, future health promotion campaigns should aim at young people and emphasize the importance of these activites in the prevention of  osteoporosis. For example, in addition to the conventional focus on muscle building, the effect of resistance exercise programme on increasing bone mineral density and preventing fractures should be conveyed to the public. The gender and ethnic differences in these tradition should also be acknowledged in the transmission of information to the target population. In particular, sufficient outdoor and sunlight exposure is a challenge for the Muslim women's community in Malaysia because of the full-body covering clothing.25 An innovative approach to solving this problem, while respecting the religious practices of the community, should be planned and communicated to the community.

The present study has some limitations. Firstly, due to the study design, causal conclusions cannot be drawn. Also, this analysis was single-centered, and the study population did not represent all of Malaysian university students. The health beliefs of students about osteoporosis, which influence osteoprotective activities, have not been assessed in this research.

Overall, Malaysian university students have a fair level of knowledge about osteoporosis across the disease condition, risk factors and complications. Some gender and ethnic differences in the awareness of osteoporosis have been reported. These factors should be included in the preparation of anti-osteoporosis campaigns in Malaysia. There is a lack of substantial association between students' knowledge of osteoporosis and prevention of osteoporosis, suggesting that these activities may not be correlated with bone health. Therefore, connecting health practices to bone health among younger generations could be considered in potential future awareness campaigns.

Acknowledgement: We are thankful to Universiti Kebangsaan Malaysia for supporting the study.

Disclaimer: The results of this manuscript have been presented in the 11th Malaysia-Indonesia-Brunei Medical Science Conference 2019 in Jakarta, Indonesia, and the abstract has been published in the abstract book of the conference.

Conflict of Interest: None