Objective: Lactate is a useful prognostic marker, as its level increases in hypoxic tissue and/or during accelerated aerobic glycolysis due to excessive beta-adrenergic stimulation and decreased lactate clearance. The Surviving Sepsis Campaign Bundle 2018 Update suggested re-measurement of lactate within 2-4 hours so as to conduct/ help/administer /introduce lactate-guided resuscitation to reduce mortality due to sepsis. The aim of this study was to compare initial lactate levels and lactate clearance at 4 h of recognition of sepsis as mortality predictors in sepsis

Methods: It was a prospective study performed with ethical approval in a single tertiary care centre. Patients aged 18 years or older who were diagnosed with sepsis by the Sepsis-3 definition were included in the study while patients who were not admitted to the ICU were excluded Dropout criteria was death of pateints within 4 hours of recognition of sepsis. Baseline demographic data was obtained and subjects were treated with an hour-1 bundle and examined for initial lactate levels. At 4 hours, lactate was re-measured and patients were observed for 28 days then after Lactate clearance was calculated by the following formula: ([initial lactate - hour-4 lactate]/initial lactate) × 100.

Results: Of the 41 subjects included in the study; 27 died (28-day mortality --65.9%). Age, sex, diagnosis of the patient and Charlson's Comorbidities scores between survivors and non-survivors showed no significant differences. Non-survivors had higher Sequential (sepsis-related) Organ Function Assessment (SOFA) scores (11.41±3.46 versus 8.77±2.92; p=0.02). Initial lactate levels and lactate clearance did not differ in prognostic value (AUC 0.67 versus 0.5; p=0.086), but initial lactate levels of >2 mmol/L had the greatest sensitivity (81.5%).

Conclusion: Initial lactate level and lactate clearance did not differ in predicting mortality in patients with sepsis

Lactate serves as a tissue perfusion marker in sepsis,1 but the etiology of hyperlactatemia in sepsis is complex. Under normal conditions, the lactate concentration is less than 2 mmol/L,2 and arterial lactate concentrations are determined by the balance between lactate production and its clearance. In sepsis, as a result of tissue hypoxia and/or high levels of aerobic glycolysis due to excessive beta-adrenergic stimulation, the lactate level increases due to lactate overproduction1 and decreased clearance.3

Hypoxic conditions hamper the process of mitochondrial oxidative phosphorylation, resulting in the accumulation of pyruvate and an increase in lactate production. Gore et al. found increased levels of pyruvate and its oxidation products in patients with sepsis.4 By contrast, Levraut et al. showed that hyperlactatemia in stable patients with sepsis was caused by a decreased lactate clearance rather than overproduction.3 A strong correlation was also been observed between blood lactate concentration and clearance3 and studies have shown that lactate-guided resuscitation can reduce the mortality rate in patients with sepsis.5-7

This study analysed all patients with sepsis who met the Sepsis-3 definition and our study inclusion criteria. All subjects were treated with an hour-1 bundle for sepsis.

The aim of the study was to compare the initial lactate levels and lactate clearance at 4 hours of recognition of sepsis as predictors of mortality due to sepsis.

It was a prospective observational analytical study conducted in a single tertiary care centre after ethical approval from Health Research Review Committee of Mohammad Hoesin Central Hospital and Faculty of Medicine, Sriwijaya University, Palembang, Indonesia, in the time duration between February till June 2019.

Patients aged 18 years or older and diagnosed with sepsis using the Sepsis-3 definition were included while patients who were not admitted to the ICU were excluded from the study. Dropout criteria was death within 4 hours of recognition of sepsis. Trained investigators, under intensivist supervision, identified all eligible patients for enrolment in this study. Sample size was calculated by purposive sampling technique.

The aim of this study was to compare lactate levels and lactate clearance 4 hours after recognition of sepsis as predictors of mortality due to sepsis. A total of 44 patients met the inclusion criteria and were enrolled in our study. Three patients were dropped out due to death within 4 h of sepsis recognition, leaving a total of 41 subjects whose data were analysed in this study.

The patients in our study had a 28-day mortality rate of 65.9% (27 subjects died). No considerable differences were evident between non-survivors and survivors in terms of age, sex, diagnosis of the patient, microbiology results or comorbidity score based on Charlson classification (Table-1). 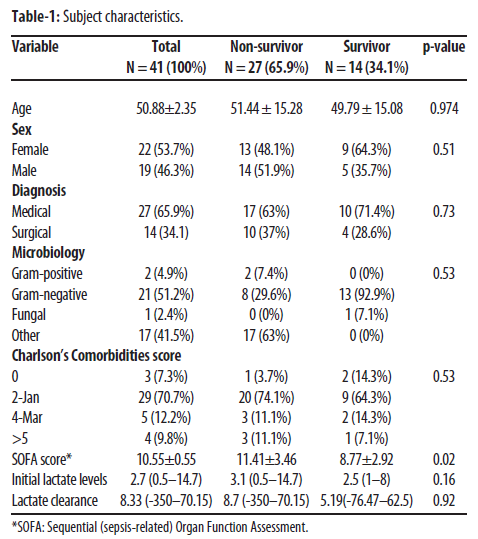 The only variable that showed a clear difference between non-survivors and survivors was the SOFA score. The initial lactate levels were higher in non-survivors than in survivors (2.7 [0.5-14.7] versus 2.5 [1-8]), although the difference was not statistically significant (p = 0.16).

We analysed Area Under the Receiver Operating Characteristic (ROC) curves (AUC) to confirm the accuracy of initial lactate levels or lactate clearance in predicting mortality in patients with sepsis (Figure-1). 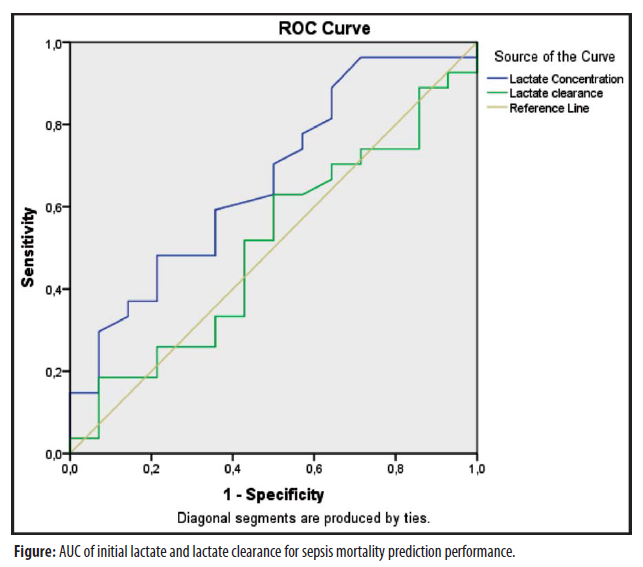 We also compared initial lactate levels and lactate clearance at 4 h for predicting mortality due to sepsis (Table-2),

but the difference between these two variables was not statistically significant. 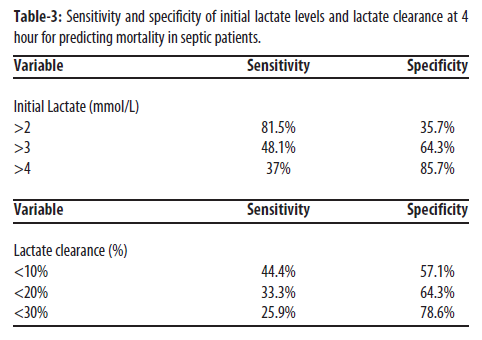 The arterial lactate level is determined by the balance between lactate production and its clearance. Despite their different aetiologies, lactate levels remain clinically important and can be used as a prognostic marker. For example, Mahmoodpoor et al. indicated that patients with sepsis who died within 28 days had higher serum lactate levels at the time of arrival and required a higher dose of vasopressor.13 Similarly, Lokhandwala et al. showed that lactate levels >4 mmol/L at 6 h after the initial examination and lactate reductions less than 20% were associated with an increased risk of in-hospital mortality due to sepsis.14 Nguyen et al. found that patients with a higher lactate clearance had significantly decreased in-hospital and 28 or 60-day mortalities.15 The Surviving Sepsis Campaign Bundle 2018 Update suggested re-measurement of lactate within 2-4 h of recognition of sepsis for lactate-guided resuscitation to reduce mortality.1

In this study, neither lactate level nor lactate clearance differed between survivors and non-survivors. This result contrasted with a retrospective study by Ryoo et al., who found a lower median 6 h lactate level and a higher lactate clearance in survivors than in non-survivors.8 This inconsistency between these study findings probably reflected the different patient populations (sepsis versus septic shock). In this study, we included all patients with sepsis diagnosed by using the Sepsis-3 Definition, which included those patients who had initial lactate levels of 2 mmol/L or less.

Our study had several limitations. One limitation is that we did not examine lactate at 2 h after recognition of sepsis, as suggested in the Surviving Sepsis Campaign Bundle 2018 Update, which recommends re-measurement of lactate within 2-4 h. A second limitation is that we included all patients with sepsis diagnosed by using the Sepsis-3 definition, which included those who had lactate levels of 2 mmol/L or less. A third limitation was that this was a single-centre study, which cannot be generalized to other institutions and populations.

Acknowledgement: We thank Mohammad Hoesin Hospital, Palembang for allowing us to conduct this research.

Disclaimer: The abstract has been previously presented in 11th Malaysian Indonesian Brunei Medical Sciences Conference 2019, and the manuscript was a part of a research paper

Conflict of Interest: This article has no conflict of interest.

Funding Disclosure: There is no funding disclosure for this article.