Objective: This pilot study was performed to identify the differences between the effectiveness of HFNC and conventional oxygen therapy.

Methods: This study was a part of a more extensive ongoing study in a tertiary care hospital from January to April 2019. Criteria for inclusion were adult patients scheduled for upper-abdominal surgery. Patients were randomised into two groups: conventional oxygen therapy (n=10) and HFNC therapy (n=10). The differences in (clinical parameters;Mean Arterial Pressure (MAP), heart rate, respiratory rate), diaphragm thickening on ultrasound, air lung distribution on Electrical Impedance Tomography (EIT), and blood gas analysis data between both groups were assessed at specific times. Adverse events were recorded and treated during the study. The data collected was analysed using SPSS software version 23.0.

Results: During the recuritment of patients, no issues were indentified in this study. Therefore, no clinical or statistical differences in EIT and ultrasound diaphragm thickening between the two groups were observed; no clinical or statistical differences in patterns in clinical parameters were found. The mean arterial PO2 was particulary different at time 1: 137.10 mmHg for patients in the conventional therapy group and 93.95 mmHg in the HFNC group (p = 0.001). A patient in the HFNC group reported a feeling of discomfort.

Conclusion: The aim of this study was to observe differences between HFNC and conventional oxygen therapy. Nonetheless, more data are needed in order to achieve a conclusive result.

Postoperative pulmonary complications (PPCs) are common, raising both costs and patient mortality.1 Following major elective abdominal surgery, PPCs cost the health care system an additional $30,000 per patient and allow the affected patient to stay in hospital for another six to nine days.2,3 These complications are underreported but remain a major cause of perioperative morbidity and mortality.3 Annually, more than 230 million major operations are estimated to take place worldwide. In major surgery, the incidence of PPCs ranged from <1 to 23%.1 Jin et al 2015. reported that 9.7% of postoperative patients had pulmonary complications, with 1.84% deaths. Data collected from Cipto Mangunkusumo National General Hospital showed that of 403 non-cardiac surgical patients, 18.4% had postoperative complications; 12.9% had respiratory failure and 8.4% developed pneumonia.4

HFNC creates positive pharyngeal pressure, which increases lung volume, sustains the recruitment of collapsed alveoli, minimises the variability of inhaled oxygen fraction, decreases the CO2 content of  anatomical dead space (the washout effect), and retains mucociliary function due to warmth and gas humidification.7 A meta-analysis on the use of HFNC on critically ill patients has shown that it reduces cases requiring intubation, mechanical ventilation and increased use of respiratory support device.8,9 However, , studies on the use of HFNC therapy after abdominal surgery are limited and the results are controversial.5,7,10 Considering the similarity between the NIV and HFNC mechanisms, the effectiveness of NIV therapy in improving the outcomes of post-abdominal surgery patients was used as a benchmark for this research on the use of HFNC on post-abdominal surgery patients.11-14

The effects of HFNC intervention in ventilation and lung volume were analysed using techniques such as electrical impedance tomography (EIT) and ultrasonography. EIT is a radiation-free, non-invasive technique to obtain real-time images of and data regarding patients' ventilation and lung volume.5,15 It can be used to estimate lung aeration regionally and globally.16 Bedside ultrasonography can be a simple and non-invasive method of observing diaphragm function and post-abdominal surgery for patients' breathing.17

Patients in the HFNC group had lower respiratory rates compared to conventional oxygen therapy,10,18 while the heart rate and MAP of patients in both groups were similar.18 The PaO2/FiO2 ratio was significantly higher with HFNC at 24 hours and 48 hours.18

Futier et al 2015. studied the effect of early HFNC use on hypoxaemia in patients after major abdominal surgery and found that with HFNC, 21 per cent of patients (23/108) had hypoxaemia (defined as peripheral SaO2 < 92 per cent while breathing 10 L/min oxygen, PaO2 < 60 mmHg on room air or PaO2 < 80 mmHg while breathing any additional oxygen), compared to 24 per cent (27/112) of patients treated with standard oxygen 1 hour after extubation. The incidence increased from 27% (27/108) to 30% (34/112) following discontinuation of treatment.19

This pilot study was designed to identify any variations in diaphragm contraction and lung distribution between HFNC and COT. This pilot study will also provide valuable information on protocol feasibility, consent and screening procedures and data collection processes which can be used as input for a more extensive study. To our knowledge, this is the first study in Indonesia to compare the effects of COT and HFNC oxygen therapy on diaphragm function in patients with post-upper abdominal surgery.

This study was an unblinded, randomised controlled study that was part of an ongoing research at Cipto Mangunkusumo National General Hospital, Jakarta, Indonesia. This study was approved by the Ethics and Research Committee of the University of Indonesia (1132/UN2.F1/ETIK/2018) and registered as ID: NCT04059614 by ClinicalTrials.gov website.

The primary objective of this study was to observe the diaphragm function and lung distribution of post upper-abdominal surgery patients. The secondary objectives of this study were to assess clinical parameters (MAP, heart rate, respiratory rate) and arterial oxygen pressure differences between the two groups.

As this was a pilot study, no power calculation was made. A convenience sample of 20 patients was selected for a feasible duration of study. The patients were treated at Cipto Mangunkusumo Hospital between January and April 2019, The consecutive sampling method or enumerative sampling method which every subject meeting the criteria of inclusion was selected until the required sample size was achieved, was used.20 Subjects of this study were recruited, consented, and clarified according to the hospital and ethical committee by-laws.

The patients selected met the following criteria. They were between 18 and 65 years of age, with the American Society of Anaesthesiologist (ASA) physical classification I-III, the Body Mass Index < 30, a patent airway, the pre-operative Measurement of Exercise Tolerance before Surgery score > 4, and the Portsmouth Physiological and Operative Severity Score for the Enumeration of Mortality and Morbidity (P-POSSUM) mortality score < 10 %.

Patients who were uncooperative, had DNR status, had installed tracheostomy, had pleural effusion, pneumothorax or pulmonary atelectasis, had spontaneous extubation, had been mechanically ventilated for more than 7 days, or had dropped out were excluded.

The participating patients were randomised using a computerised generating table of random numbers (www.randomizer.org)21 into two groups of 10. The HFNC group was the intervention group, and the COT group was the control group (Figure-1). 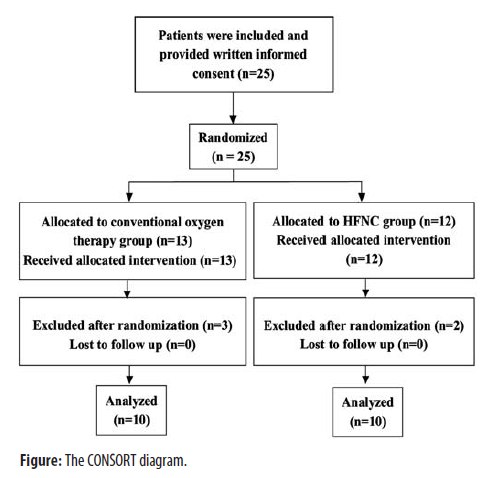 The clinical conditions of the patients were re-evaluated postoperatively. They were given reversed neuromuscular blocking agent (NMBA) and sedated for transport to the ICU. In the ICU, all patients received multimodal analgesia (combination of NSAID, paracetamol and epidural analgesia) with the Visual Analog Scale (VAS) target < 3. Clinical monitoring, weaning, extubation, and other definitive and supportive therapy had been performed using standard operating procedure/work instruction in the ICU.

At hour 24 (2 hours before transfer to the ward), HFNC was removed and these patients experienced a nasal cannula of 2-4 L/min airflow. The control group proceeded to receive the same treatment as mentioned above. Several tests were taken a few minutes after hour 24 (Time 2), several measurements were taken: diaphragm thickness, TIV, blood gas analysis and vital signs. Forty minutes after HFNC was released (Time 3), the same parameters assessed at Time 2 were measured again, this time with the addition of rEELI-G and rEELI-ROI using EIT. Any adverse events have been reported and treated.

In the case of a cardiorespiratory emergency arising within the first 25 hours requiring resuscitation and/or intubation and mechanical ventilation, the patients affected received the necessary treatment and their data were collected and analysed.

The following changes in trends were observed. Numeric variable data (rTIV, rEELI-G, rEELI-ROI, diaphragm thickening fraction, arterial PO2, heart rate, MAP and respiratory rate) were presented as medians and analysed with an unpaired t-test or the Mann-Whitney U test based on their data distribution. Categorical variable data (sex, age, BMI, ASA score, P-POSSUM score and ARISCAT score) were presented as percentages and compared using the c2 test or an alternative test. Analysed data with a mean value (p-value) < 0,05 were deemed to be significant. Data collected from both groups at each collection time were analysed using the Statistical Package for the Social Sciences (SPSS) software version 23.0 (SPSS Inc, Chicago, III, USA).

During the study period, 25 patients met the inclusion criteria. Five were excluded due to postoperative withdrawal (n=4) or a denial of consent (n=1). The reasons for postoperative withdrawal were changes in the routine of surgery or anaesthesia. Both groups were found to have substantially similar demographic baseline data. The remaining 20 patient characteristics and data on oxygenation therapy are presented in Table-1. 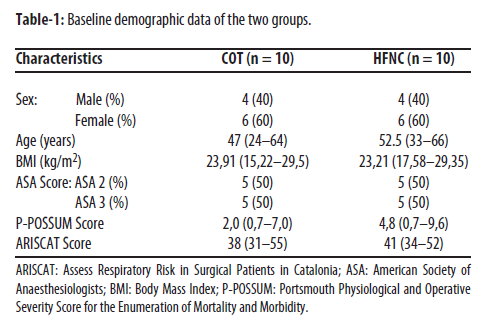 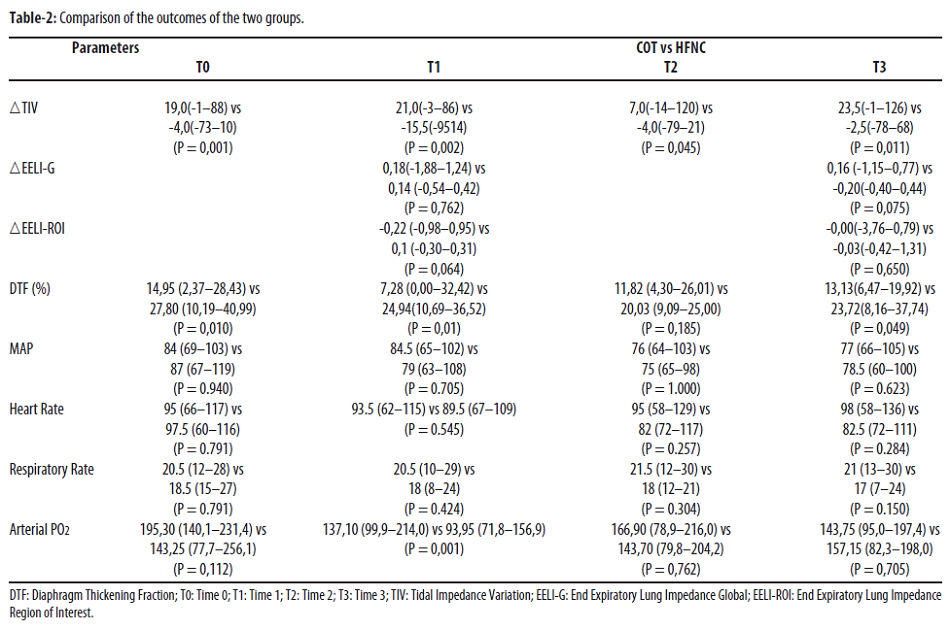 Although Perbet et al 2015. showed that HFNC oxygen therapy enhanced lung volume and oxygen, Umbrello et al 2015. concluded that increasing ventilation support had significantly changed and decreased diaphragm TF.10,17 Nonetheless, in this study, researchers found differences were in baseline (T0) lung distribution (EIT parameters) and diaphragm thickening ratio, so that it was not possible to do so. No clinical and statistical differences found between the two groups with respect to heart rate and respiratory rate, as opposed to previous studies that identified lower respiratory rates among HFNC patients and following intervention.17,18 The mean arterial PO2 measurement for the COT group at Time 1 (137.10 mmHg) was significantly higher than that for the HFNC group (93.95 mmHg), with p = 0.001. However, due to the limited sample size of this study, one must be careful in interpreting this result. The disparity between arterial PO2 measurements could be clarified by the improved oxygen titration capability of the HFNC system.22 The fraction of oxygen in both groups was titrated to maintain > 92 per cent by pulse oximetry; nevertheless, a few patients in the HFNC group required oxygen fractions above 21%. Due to the high flow nature of the gas delivery in the HFNC system, it has been estimated that during every inspiration, each patient in the HFNC group breathed a constant fraction of oxygen.23 Patients in the COT group may have inhaled different fractions of oxygen depending on tidal volume, as the lower tidal volume, the higher the fraction of oxygen. This limited the risk of hyperoxia in the HFNC group. Only one patient in the HFNC group had nasal discomfort.

This study was feasible after a minor adjustment of the study protocol, in particular the improvement of communication technique used to clarify the study, obtain consent and control the discomfort of patients. Further sample recruitment was required to achieve statistical and clinical conclusions.

There were no clinical and statistical variations in postoperative diaphragm contraction and lung distribution between COT and HFNC oxygen therapy in patients undergoing upper abdominal surgery. Further recruitment of the sample was therefore necessary.

Acknowledgement: The authors would like to thank all patients who participated in this study. Thanks are also due to Krisna, Department of Radiology, Faculty of Medicine, Universitas Indonesia — Cipto Mangunkusumo National General Hospital, as well as nurses and anaesthesiology residents working in the ICU, without whom this study would never have been successful.