Qualities of a Teacher: A Trainee’s Perspective

Methods: The questionnaire-based cross-sectional survey was conducted in two tertiary care teaching hospitals in Lahore, Pakistan, from July 2019 to December 2020, and comprised all house officers and postgraduate residents. Data was collected using a self-administered questionnaire that had three sections: demographics, best method of teaching, and the characteristics of a good medical teacher. Data was analysed using SPSS 20.

Results: Of the 135 subjects, 56(41.5%) were males; 79(58.5%) were females; 76(56%) were junior trainees; and 77(57%) belonged to surgical specialties. The overall mean age was 27.6±2.4 years. Best teaching method identified by the trainees was 'asking of problem-based questions' 46(33.6%). Good communication skills 61(44.5%), and calm and non-humiliating demeanour 61(44.5%) were the most frequently identified qualities. More surgical trainees considered the generation of competition among learners as the best teaching method than the trainees from other specialties (p=0.001). House officers reported 'unbiased' (p=0.001) and 'moral and ethical' (p=0.001) significantly more frequently as a good trait in their teachers compared to the residents.

Conclusion: The most important qualities in a medial teacher, as identified by the learners, were good communication skills and calm and polite attitude.

As part of their career, medical faculty serves as role model being a teacher/supervisor, a physician and as a person for the younger physicians.1 Medical education is an unusual field since no formal training as a teacher is obtained by most medical teachers. Having a combination of interest in teaching and the welfare of the trainee, and through clinical experience, most medical teachers start their teaching careers with the hope of contributing something valuable to the life and career the trainee. Abraham Flexner, the author of the 'Flexner Report' and a renowned educationist with great contribution to the field of medical education, is reported to have said, "Medical education is not just a programme for building knowledge and skills in its recipients … it also is an experience which creates attitudes and expectations."2 Most of the studies on the matter have evaluated the qualities of a medical teacher from a students' or teachers' perspective. Boerebach et al. explored different typologies of role modelling of the medical faculty.1 The associations between overall teaching performance and the different types of role models (teaching/supervisors, physician and persons) showed that the odd ratio (OR) was the highest for the role of faculty as a teacher/supervisor.1 Ottenhoff et al. looked at four profiles of a medical teacher, as identified by 26 expert academicians; the inspirer, the role model, the practitioner, and the critic.3 Goldie et al. and Al-Mohaimeed explored the perspective of students and tutors on what makes a good clinical teacher.4,5 However, these studies did not include postgraduate trainees. There is meagre data regarding the qualities a trainee deems to be more important in a teacher, especially from our part of the world. The current study was planned to determine the qualities of a good medical teacher from the perspective of trainees. Secondary objectives included evaluation of best teaching method, and the association of specialty and level of training with teaching methods and qualities of a medical teacher.

The cross-sectional study was conducted at two tertiary care teaching hospitals in Lahore, Pakistan, from July 2019 to December 2020. Ethics review exemption was obtained from Mukhtar A. Sheikh Hospital since the study involved no intervention. The sample was raised using consecutive non-probability sampling Technique from among house officers and postgraduate residents from departments of the two hospitals. Doctors on teaching or non-training posts were excluded. A medical teacher was defined as basic science teachers, supervisors, or any senior postgraduate trainee, fellow, or anyone else involved in the education of students.

After taking informed consent from the enrolled subjects, data was collected using a self-administered questionnaire which was provided to the participants, who filled it out on their own before returning it next day or two. No face-to-face interviews were conducted to protect the identity of the participants.

The questionnaire had three sections: demographics, best method of teaching, and the characteristics of a good medical teacher. Demographic variables included age, gender, level of training, postgraduate year of training and specialty. The specialties were divided into surgery and allied/other specialties. Six methods of teaching were presented in the next section and the participants were asked to select the best methods. These included: asking of problem-based questions; providing role-model for the learner; creating an environment of competition among the learners; building up on what the trainee already knows; didactic instruction or couching in a lecture; and encouraging if goals are met and humiliating if the goals are not met. It was also enquired separately if fear was a strong motivating factor in learning. For the last section, an open-ended question asked the participants to state the three characteristics that should be present in a good medical teacher.

Data was analysed using SPSS 20. Missing values were excluded from the analysis list-wise. Continuous variable age in years was presented as mean and standard deviation. Frequencies with percentages were calculated for all the other variables. Chi-squ test was applied for assessing association between specialty and level of training with teaching methods and qualities of a teacher. For analysis, level of training was divided as house officers and residents, as well as junior trainee, meaning house officers and residents in their first and second years, and senior trainee, meaning residents in their third, fourth and fifth year of training. The level of significance was set at p<0.05, and only associations that reached that level were presented for the sake of clarity. The qualities of the teacher were grouped into four categories, with each category having sub-categories in line with an earlier study.6 The four categories were: teaching behaviour or instructional delivery; interaction with students and colleagues; personal qualities; and professional development. 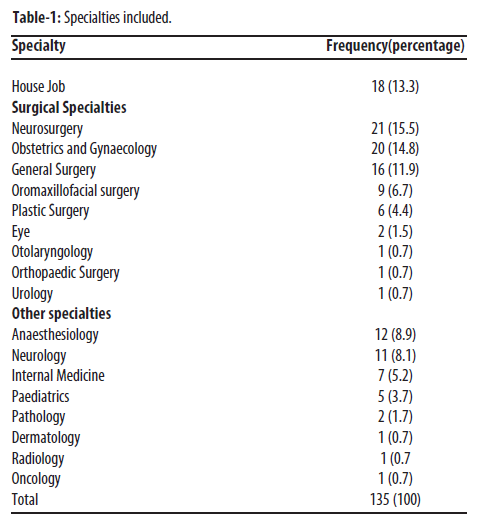 Best teaching method identified by the trainees was 'asking of problem-based questions' 46(33.6%) (Table-2).

Good communication skills 61(44.5%), and calm and non-humiliating demeanour 61(44.5%) were the most frequently identified qualities in medical teachers (Table-3). 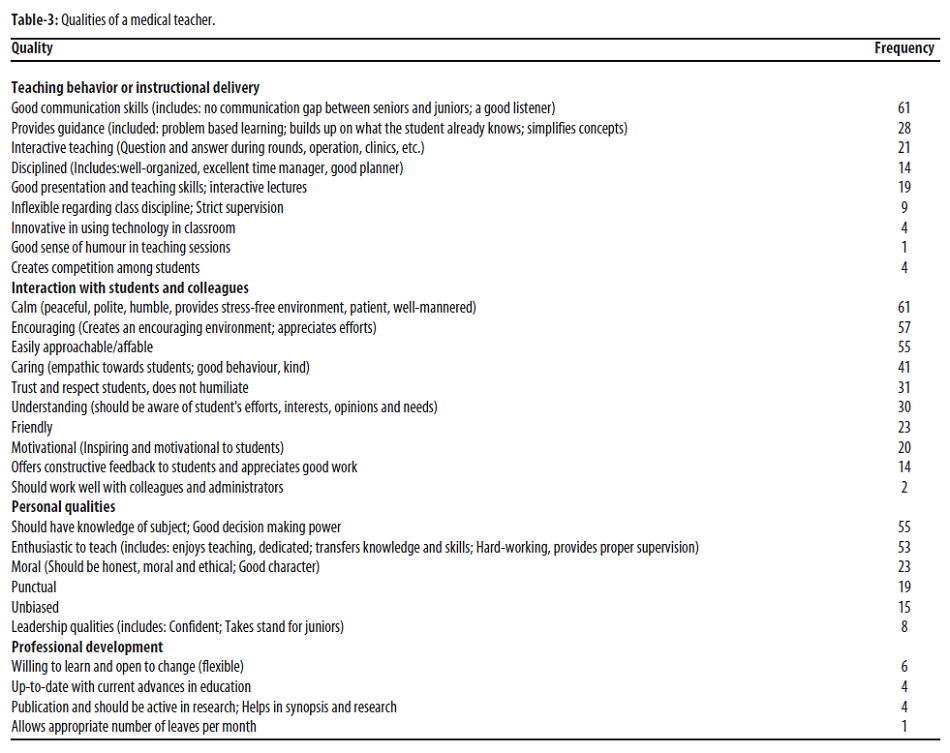 More surgical trainees considered the generation of competition among learners as the best teaching method than the trainees from other specialties (p=0.001). House officers reported 'unbiased' (p=0.001) and 'moral and ethical' (p=0.001) significantly more frequently as a good trait in their teachers compared to the residents.

The most important qualities of a medical teacher identified in the current study were good communication skills, calm and non-humiliating behaviour, encouraging and approachable, knowledgeable, and enthusiastic about teaching. Such findings have been reported earlier as well.6,7 From a teacher's perspective, the top three qualities in a medical teacher in another study were knowledge of subject, enthusiasm and communication skills6 Good inter-personal skills and relationship-building were identified as significant characteristics of a good teacher.4 In a study conducted on dental students, top performance attributes were expertise, good command on clinical skill, and being able to understand/relate to students.8 Top personality attributes identified included being respectful to students, having good communication skills, being helpful, honest, and emotionally controlled.8 A study reported good communication skills, honesty and motivational towards students as the top three qualities of a teacher from the viewpoint of faculty, and respectful, good planner and good examiner as the top qualities identified by students.5 On the other hand, the least identified three characteristics reported by the faculty were leniency, telling jokes during class and being non-judgmental, and by the students as sense of humour, self-sacrificing and sharing of personal experience.5 In line with literature,5,8 good sense of humour was the least frequently identified characteristic of a teacher in the current study.

Communication skills were reported more frequently by the junior trainees (47% vs 53% senior trainees) in the current study. Similarly, Al-Jobair reported that junior dental students recognised personality attributes, including being respectful to students, having good communication skills, being helpful, honest, and emotionally-controlled, etc., as important more than the seniors, whereas performance attributes were rated equally by the two groups.8

Interactive teaching, by asking problem-based questions, was identified as the best method of teaching by participants in the current study. However, a third of the surgical trainees considered creating competition among learners as the best teaching method, which was not reflected in responses from trainees associated with the other specialties. Interestingly, none of the medical trainees in the current study reported teaching during rounds as a preferred trait in a teacher. This may be due either to the possibility of harassment during rounds, or because the rounds in medicine are generally exhaustive. However, these are just speculations. The finding may have been different if a closed-ended question was provided to the trainees.  House officers more frequently reported 'unbiased' and 'moral and ethical' as good traits in their teachers. It may be because, as juniors, they are more exposed to bias at the hands of seniors, or because the perception of doctors changes as they progress through their training.

The question regarding qualities of a medical teacher was an open-ended question, which was a limitation of the study. Moreover, qualities of a supervisor may differ slightly from those of a lecturer, which were both included under the same category in the current study. There were more respondents from surgical specialties which may have led to response bias. Further studies are needed to evaluate the qualities of a teacher from the perspective of each of the various specialties, as well as to look into the changes in the perspective of a trainee about such qualities as they progress in their careers.

Asking of problem-based questions and providing a role-model for the learner were among the best teaching methods identified by the trainees. Good communication skills, politeness, encouraging, approachable, knowledgeable, and enthusiastic were the leading qualities identified in a medical teacher, while good sense of humour, and innovative in using technology in classroom were not as frequently mentioned by the trainees.