Objective: To assess harassment among surgical trainees and its effects on mental health, and to explore its association with gender.

Method: The nationwide cross-sectional pilot study was conducted by the Association of Women Surgeons of Pakistan from July to September 2019, and included  surgical trainees of either gender working in both public and private hospitals. Data was collected using an anonymous online survey form to assess harassment and self-perceived burnout and depression. Data was analysed using SPSS 22.

Conclusion: An overwhelming need was found for trainee surgeon support groups and other interventions targeted at improving the workplace environment for surgical trainees in Pakistan.

Harassment, described as any unwelcome behaviour that makes a person feel humiliated, intimated or offended, is a disturbingly common occurrence in the surgical workplace.1 Harassment takes many forms and may be verbal, physical, emotional and sexual in nature. Particularly vulnerable due to a unique power differential are surgical trainees, with up to 47% experiencing workplace harassment,2,3 with female surgical trainees more likely to suffer harassment, especially of the sexual type.2-4 Understandably, harassment adversely affects job satisfaction, performance and mental well-being of the trainees, leading to increased risk of burnout, depression, substance abuse disorders and even suicidal ideation.2,5-9

The nationwide cross-sectional pilot survey was conducted from July to September 2019 by the Association of Women Surgeons of Pakistan (AWSP). After getting approval from the ethics review committee of Aga Khan University (AKU), Karachi, the anonymous online survey using Google Forms was disseminated via social media platforms, such as Twitter, Facebook and Instagram, and to surgical programmes across Pakistan.

The survey was designed by the research team and pretested for ambiguities prior to distribution to the participants. The target respondents were trainee surgeons in Pakistan, including surgical residents, fellows and senior medical officers.

The survey form had four sections: demographic and work characteristics; experience of harassment at workplace and response to harassment; perceived burnout and depression which asked the participants how burntout/depressed they felt, and their responses were scored on a 5-point Likert scale that were categorised as 1= none, 2-3 = mild-to-moderate, 4-5 = severe; and the perceived need for trainee surgeon support groups.

Data was analysed using SPSS 22. Qualitative variables were presented as frequencies and percentages and were assessed using Chi-squared/Fisher exact tests. Multivariable logistic regression, adjusted for age, position and specialty, was performed with gender as the dependent variable. Odds ratio (OR) and 95% confidence interval (CI) were calculated. P<0.05 was considered statistically significant. 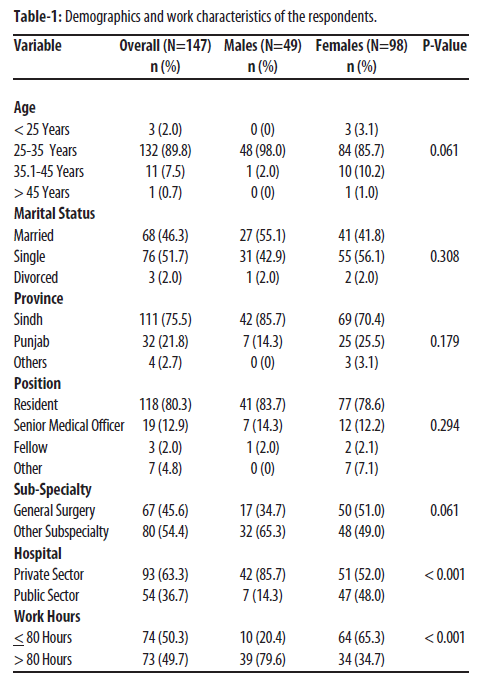 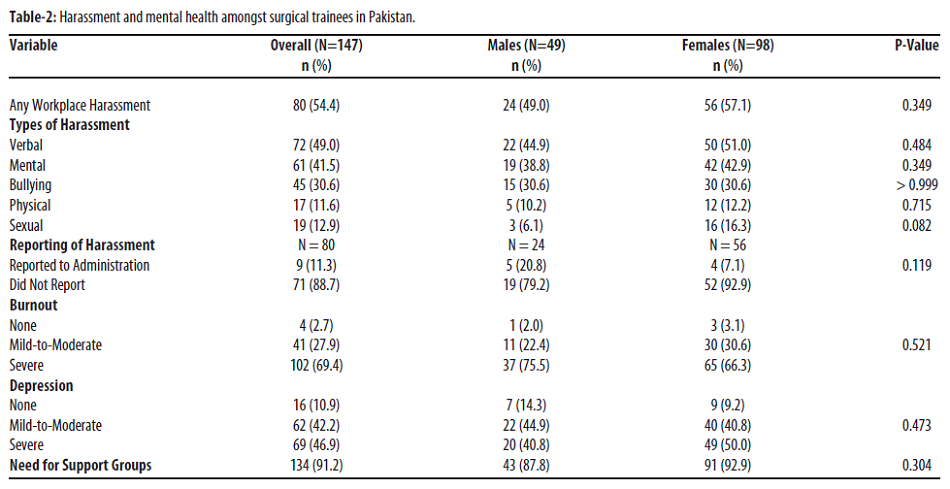 When in need of emotional support, the majority of trainees reported going to their friends 105(71.4%), followed by parents 76(51.7%) and mentors 34(23.1%). Amongst those experiencing harassment, the commonest response was to ignore the incident 45(56.3%), followed by sharing the incident with a friend 42(52.5%), or seeking support 29(36.3%). Trainees working at private sector hospitals were more likely to experience sexual harassment (p=0.042) compared to those working in public sector hospitals. 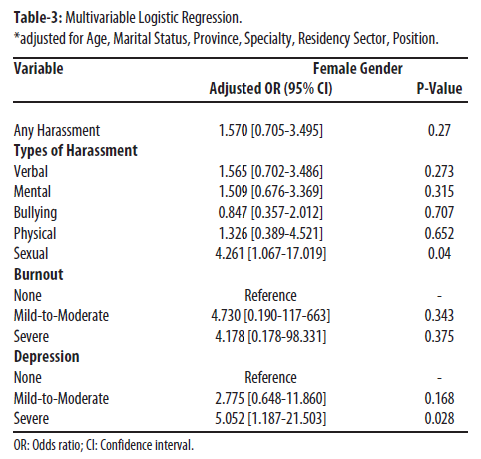 Though the period of surgical education and training is amongst the most formative in a budding surgeon’s career, it is also as trainees when young surgeons are most vulnerable to harassment in the workplace. Our pilot survey describes the prevalence and types of harassment faced by surgical trainees in Pakistan, and explores associations with burnout and depression. Our results show that more than half of surgical trainees experience some form of harassment during their training. Alarmingly, the vast majority of harassment has gone unreported. In addition, 69.4% of trainees reported experiencing severe burnout and 46.9% severe depression. The need for surgical trainee support groups was unanimous, with more than 90% respondents expressing a need for such groups.

In our study, 54.4% of trainees reported facing harassment, most frequently verbal (49%) and mental (41.%) harassment, and bullying (30.6%). Rates of harassment were similarly high amongst trainees of both genders, though sexual harassment was significantly associated with female trainees (OR: 4.261). These findings align somewhat with previous literature. A systematic review by Huang et al. revealed a pooled incidence of harassment of 31.2%, with high heterogeneity, and incidences in individual studies ranging from 9.7%-71%1. The same review also reported a pooled incidence of bullying between 37.7%-40.3%1. In Pakistan, previous surveys reveal incidences of bullying and harassment of around 63% amongst junior doctors and trainees, although these are not specific to surgical trainees11-13. Furthermore, similar to our findings, female surgical trainees have been consistently found to be at higher risk of sexual harassment in the workplace 2-4. The incidence of sexual harassment amongst female trainees in our study was 16.3%, which is similar to the 19.9% reported by Hu et al. in their national survey of surgical residents in the US2.

Unfortunately, despite the high prevalence of harassment amongst trainees in our study, only 11.3% reported their experience to their hospital’s or institution’s administration. This is similar to a previous study in Pakistan, where the majority of victims of bullying did not complain to their administration after experiencing bullying11. Major reasons for not reporting incidents range from being afraid of the consequences of complaining to trying to cope with it oneself 11. This only emphasizes the position of vulnerability of surgical trainees, as in many cases the perpetrator of harassment or bullying may be none other than surgical faculty and/or senior residents or fellows2,11. Our results reiterate a call to action for institutions across the country to work toward establishing safe disclosure policies and formulating reporting mechanisms that ensure protection and anonymity for the victim. Lastly, our study found that sexual harassment was more commonly experienced by trainees at private sector hospitals compared to those at public sector/government hospitals and surgical specialties with the highest rates of harassment were Pediatric Surgery, Cardiothoracic Surgery, and Neurosurgery. To the best of our knowledge, there are no studies from Pakistan comparing harassment and mistreatment between private hospitals and public hospitals, or between surgical sub-specialties, and these findings highlight areas requiring further exploration.

When in need of emotional support, the majority of respondents in our study reported going to their friends (71.4%) or parents (51.7%), with less than a quarter going to their mentors. Similarly, responses to harassment also most commonly included ignoring the incident (56.3%) or sharing it with a friend (52.5%). Moreover, respondents wholeheartedly expressed the need for institutional trainee support groups to help with stress control (85.1%), mentoring (82.1%), and work-life balance (67.9%). These results serve to illustrate a very serious issue across most postgraduate training programs in Pakistan: the lack of institutional support towards trainees in matters such as reporting and taking action against harassment, safe-guarding mental well-being, and imparting mentorship. Although the Protection Against Harassment of Women at Workplace Act (2010)20, the Punjab Healthcare Commission Act (2010)21 and the Sindh Healthcare Commission Act (2013)22 emphasize on the need to report and act upon harassment faced in the healthcare workplace, very few hospitals and institutions have progressed towards developing formal reporting and investigatory systems. Moreover, most surgical training programs in the country lack platforms that make trainee well-being an institutional priority .When judiciously implemented, simple interventions such as mentorship and coaching programs for professional and personal development, faculty wellness champions, peer support programs, process groups, and stress-relieving group activities, may all help promote trainee mental wellness in the surgical workplace16,23. It is of utmost importance that the medical and surgical community in Pakistan work at the institutional and national level towards the development of zero tolerance harassment policies and interventions to resolve harassment incidents and protect the mental well-being of surgical trainees. The College of Physicians and Surgeons Pakistan (CPSP) is suitably placed to coordinate anti-harassment and mental health policy nationally across hospitals and institutions in Pakistan. Additionally, the CPSP must also use existing databases of trainee emails and contacts to conduct comprehensive, nationwide assessments of trainee mistreatment and mental health, so as to build on the results of this pilot survey to develop evidence-based action plans to protect surgical trainees across the country.

Limitations of our pilot survey include its sample size which was restricted due to the lack of access to a universal platform for survey dissemination amongst surgical trainees across the country. This was also the reason for inadequate representation from provinces other than Sindh and Punjab. Moreover, the majority of female respondents could be a result of a response bias due to the survey being conducted under an organization titled the Association of Women Surgeons in Pakistan. Lastly, our survey did not use any full validated tools to measure burnout and depression, but rather gauged respondents’ perceptions about their own mental wellbeing. Nevertheless, the findings of our pilot survey lay a solid foundation and reference for future related research and policy, and represent an important preliminary step for a better workplace for surgical trainees in Pakistan.

Harassment, most frequently verbal and mental, is experienced by a large proportion of surgical trainees in Pakistan, with most cases passing unreported to the administrations. Although overall harassment is similarly prevalent amongst male and female trainees, women are at a greater risk of sexual harassment. In addition, many surgical trainees also face burnout and depression, which may be associated with certain forms of harassment, such as bullying. Lastly, there was an overwhelming need for trainee surgeon support groups, and other policies and interventions targeted at improving the workplace environment for surgical trainees in Pakistan.

Acknowledgements: We are grateful to Taleaa Masroor, a medical student at the Aga Khan University, for assisting in data collection and to the members of the Association of Women Surgeons of Pakistan (AWSP) for their assistance with the creation, piloting and dissemination of the survey at the national level.