Use of endoscope in teaching of otolaryngology residents about site and size of tympanic membrane perforation and its impact on degree of hearing loss in adult patients: A cross sectional study

Objective: To determine the association between site and size of perforation of the tympanic membrane and the level of conductive hearing.

Methods: The cross-sectional study was conducted from November 2015 to October 2016 at Aga Khan University Hospital Karachi and comprised patients with tympanic membrane perforation without any other middle-ear disease. Karl-Storz Rigid Endoscope attached to a camera was used to take pictures of the tympanic membrane. Site of the perforation was determined using a vertical line to divide the membrane into two anterior and posterior halves. Size of the perforation was calculated as a percentage of the total membrane using Image J software. Data analysis was done using Stata 12.

Results: Of the 55 patients, 29(53%) were males and 26(47%) were females. The overall mean age was 33+/-15 years. With every 5% increase in the size of perforation, the hearing loss increased by 1 decibel. A difference of 5.5 decibels was noted between anterior and posterior perforations of similar size.

The external auditory canal and tympanic cavity are separated by tympanic membrane. Vertically, it measures approximately 9-10mm, while, horizontally, it is 8-9mm.1 Tympanic membrane (TM) acts as a barrier to infections from the external ear to the middle ear, and plays an important role in the transmission of sound from the external to the inner ear. TM perforations can cause conductive hearing loss (CHL) that may range from a negligible loss up to 50 decibels (dB).2

There are a number of causes which can lead to TM perforation, including trauma, infections etc. of which infections are the most common cause.3 Increase in the size of perforation causes greater CHL, and the transformer action of the middle ear is lost in the total absence of TM.3,4 The magnitude of hearing loss, according to a study, depends significantly on the location of the perforation.5 However, another study said the location of perforation had no significant effect on hearing.6

Knowledge of the anatomical details of TM perforation is of utmost importance for otolaryngology residents, including the size of perforation and, more importantly, the site of perforation. Missing any perforation in the pars flaccida of TM can be critical, as it may harbour underlying cholesteotoma which can lead to serious complications.

The current study was planned to determine the association between the site and the size of TM perforation and the level of CHL. It was also planned to increase the knowledge of residents about the anatomical details of TM perforation by recording and saving it on the monitor attached to a zero-degree rigid endoscope.

The cross-sectional study was conducted from November 2015 to October 2016 at the Department of Otorhinolaryngology and Head and Neck Surgery of Aga Khan University Hospital, Karachi. After exemption from the institutional ethics review committee same hospital, all patients presenting to the outpatient department (OPD) with TM perforation without any other middle-ear disease were enrolled. Those with active middle-ear disease, with history of surgery in the same ear, patients in whom the anterior rim of perforation was not seen, and those with suspected cholesteatoma, ossicular damage, adhesions and tympanosclerosis were excluded.

CHL was measured using pure tone audiogram. Hearing-loss was documented at frequencies of 500Hz, 1000Hz and 2000Hz. Karl-Storz rigid endoscope attached to a camera and monitor was used to take TM pictures. Site of the perforation was determined using a vertical line to divide the TM into anterior and posterior halves.  The size of the perforation was calculated as a percentage of the total TM using Image J software (Figure-1). 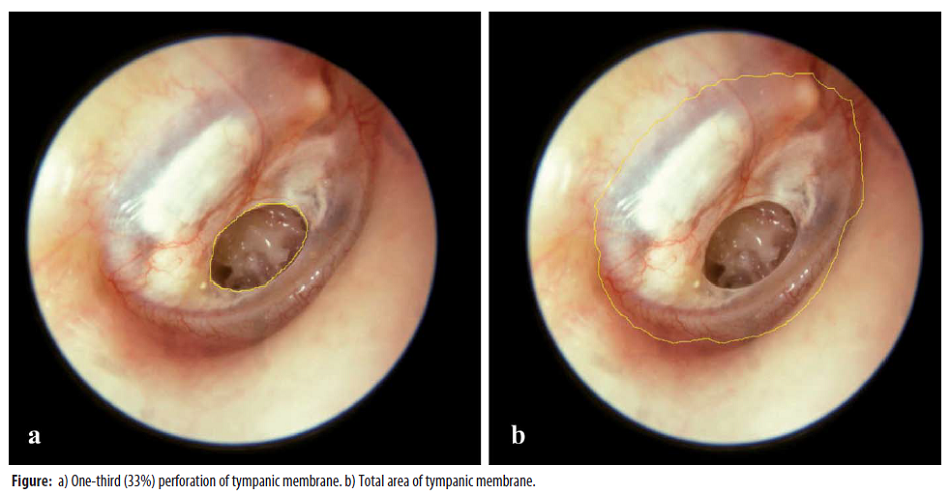 Anatomical findings on the still images saved in the monitor by the attending consultant were then explained to the residents without evaluating its impact on residents' understanding.

Data was analysed using Stata 12.0. Univariate analysis was run to determine the associations of hearing-loss with independant variables. Multivariable analysis was carried out using multiple linear regression to assess the factors related to the degree of hearing-loss. P<0.25 was taken as significant for univariate analysis, while for multivariable analysis the level of significance was set at p<0.05.

On multivariable analysis, only the size and site of perforation were significant (Table-3).

The middle ear is separated from the external ear by TM, a shield-like structure. Besides transmitting the sound energy from the external to the middle and the internal ear, it also prevents passage of infections from the external to the middle ear. TM can perforate due to various reasons, most commonly by infections and less commonly by trauma and other causes.3 Once the TM gets perforated, it loses its baffling effect, and the sound is then transferred to both the oval window and the round window simultaneously, resulting in the loss of phase difference and in hearing-loss.7

The current study showed that mean CHL was more in lower frequencies compared to the higher frequencies, which is in line with literature.8,9 An increase in hearing-loss by 1dB was observed for every 5% increase in the size of perforation, and the finding was similar to earlier studies.10,11

The results of the current study can be explained by other less-explored determinants of hearing-loss, such as middle ear volume and malleolar location of TM perforation.  One study reported that perforations which involved the malleolar region had higher conductive losses, and another study showed that perforations at the Umbo region were likely to have higher CHL.17,18 In one study, there was an inverse relationship between the middle-ear volume and the degree of CHL, and a difference up to 35dB could be predicted for perforations of similar size if the middle-ear volume differed substantially.11

One of the possibilities behind the variations in findings of the current study compared to earlier ones cited above could be that there were no major differences in the degree of hearing-loss according to location, and the current results could have been different if the malleolar location and the middle-ear volume parameters were also taken into account. However, the findings do open a door for debate about anterior perforations being associated with higher degree of hearing-loss compared to the posterior location. Further studies, with large sample sizes need to be carried out in which both the middle-ear volume and malleolar location of perforations should also taken into account.

During the course of the current study, it was observed that still images of TM served as a good learning opportunity for the residents and they reported that the anatomical details seen on the monitor with the endoscope were much superior compared to the details they had observed with the otoscope. Further studies focussing on the teaching part of endoscope compared to otoscope are required to see if the endoscope is actually superior. The current study serves as the beginning point of such studies in the future.

The degree of hearing-loss increased proportionally with increase in the size of TM perforation. Hearing-loss was higher in lower frequencies compared to higher frequencies. Higher degree of hearing-loss was seen in patients with anterior compared to posterior perforations.Also, endoscopes can be considered for routine ear examination and still images can help in better understanding of anatomical details for young residents.

Conflict of Interests: None.

Post-residency fellowship training in Maxillofacial Prosthetics is needed in Pakistan