Femoral head necrosis is a progressive disease of hip dysfunction caused by subchondral fracture, femoral head deformation and collapse, and hip osteoarthritis due to impaired blood supply of femoral head.1 Bone marrow mesenchymal stem cells (BMSCs) are mononuclear cells derived from bone marrow, which have self-proliferation and multiple differentiation potential.2,3 The osteogenesis and angiogenesis of mesenchymal stem cells (MSCs) are used to treat femoral head necrosis.4,5 A new method for clinical treatment of avascular necrosis of femoral head and other bones was explored by Yang et al. which included autologous stem cells transplantation.6 This study was conducted to analyse the perioperative nursing care of these patients.

This case series included five patients with femoral head osteonecrosis (ONFH) in Affiliated Hospital of Guizhou Medical and included 3 males and 2 females, aged 35 to 55 years, with an average age of 46.0±10.3 years. Among them, 2 cases had alcoholic necrosis of the femoral head whereas 3 cases had no obvious cause One case had bilateral necrosis of the femoral head and 4 cases had unilateral necrosis. All 5 patients were treated with BMSCs transplantation. The Informed consent was signed by all patients or their families and this study was approved by the Ethics Committee of Affiliated Hospital of Guizhou Medical University. The included five patients were more than 18 years age. After admission, they were educated about all aspects of the procedure and accepted surgery for autologous BMSC implantation. All patients met the diagnostic criteria of Ficat stage I-II.7 After admission, all patients underwent haematology, electrocardiogram, cardiac colour Doppler ultrasound and lower limb vascular colour Doppler ultrasonography to exclude absolute surgical contraindications.

Harris score was used for measuring success.8 The total score had 100 points, including hip pain (44), hip function (47), hip motion (5), and limb deformity (4). The total score was excellent in 90-100, good in 80-9, moderate in 70-79, and poor in 70. Before treatment, the score was 70.5±5.8. VAS pain score: Visual analogue pain score (VAS) was the most commonly used method for assessing pain. The measure was 0 score was painless, 0-3 score was mild pain, 4-6 score was pain, and 7-10 score was severe pain.: X-ray examination was the main method for assessing success. The survival rate was analysed by Kaplan-Meier survival analysis. The end point of observation was hip replacement when the avascular necrosis of femoral head progresses to stage IV of Ficat.

Operative procedure: The patients were disinfected with towel and injected with 0.5% lidocaine for local anaesthesia. The bone marrow needle was used to extract 110mL-150mL of bone marrow from bilateral posterior iliac spine, and then low molecular weight heparin 5000u-10000u was used for anticoagulation. BMSCs were obtained by density gradient centrifugation. Separate 1-2mL cell suspension for standby, as shown in Figure-1A and Figure-1B.

The implantation was performed under general anaesthesia, and fluoroscopy was employed to monitor the position of Kirschner wires to prevent incorrect penetration, as shown in Figure-2. 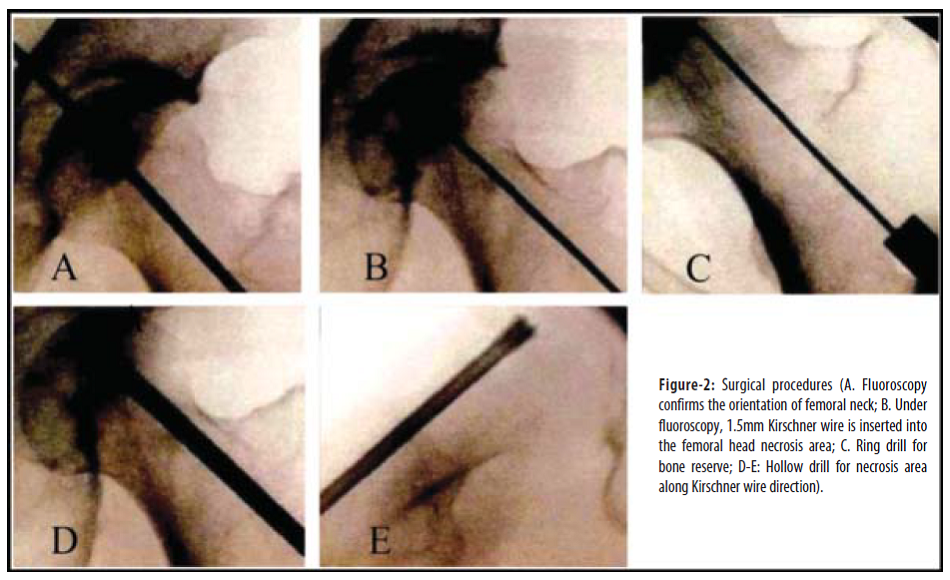 After washing the medullary cavity of the femoral head repeatedly with normal saline, the suspension containing autologous BMSCs and gelatin sponge was injected into the femoral head, the bone channel was sealed with wax, and then sutured layer by layer.

After the operation, the patients rested for about 3 days. Doctors monitored the vital signs of the patients and made the patient turn-over to avoid the bedridden syndrome. Weight bearing activities of the affected limb were avoided for 6 weeks after operation, following which slight weight bearing activities of the double crutches were allowed. Statistical data were analyzed by SPSS 16.0 software, P < 0.05 indicated statistical significance. The patients were followed up for 29 to 34 months. The results are shown in Figure-3, 4 and 5. 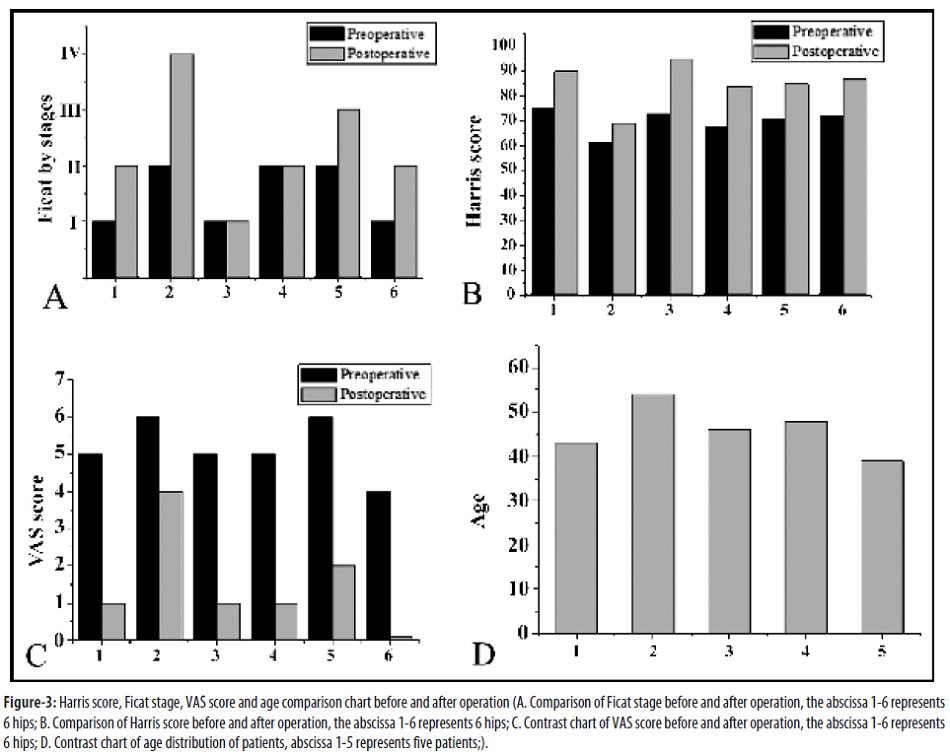 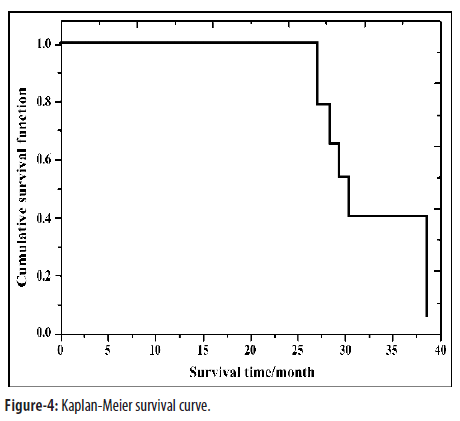 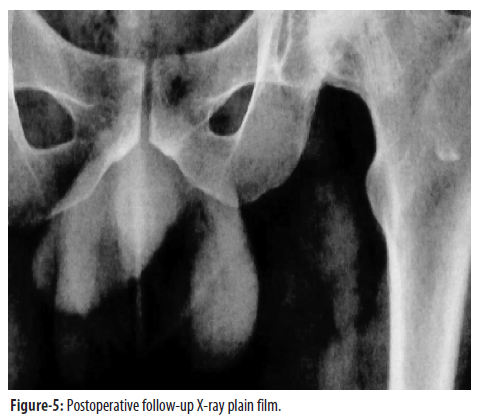 One case that had hip joint collapse was treated with total hip replacement. All other cases recovered well after follow-up.

Early diagnosis including staging and treatment is necessary to prevent or delay the occurrence of femoral head and joint damage. MRI is the best method to evaluate the early osteonecrosis.9,10 Autologous stem cells are considered the optimal treatment of femoral head necrosis which was carried out on the five cases.

As seen from the results, the Harris score after operation was significantly higher than that before operation, and the function improved significantly (P < 0.05). The VAS score after operation was lower than that before operation, and the functional improvement was obvious. There was no significant hip pain or slight pain in the rest of the patients. Since the prognosis of patients with femoral head necrosis was closely related to the stage, necrosis range and necrosis site of femoral head necrosis, the later the stage of femoral head necrosis, the worse was the prognosis. The probability of femoral head collapse is the most probable complication due to the hip joint being a weight-bearing area.11 In our series there were no complications such as infection of surgical site, deep venous thrombosis, vascular and nerve injury and long-term bed-rest complications in all patients except one hip collapse during follow-up, which conformed to the results of Chen et al.12

In this study, autologous stem cells were used to treat femoral head necrosis in 6 hips/5 patients. Patients with avascular necrosis of the femoral head could significantly reduce the VAS pain score. However, the number of cases in this study was small, and there was a lack of long-term follow-up results, so further research was needed.

Disclaimer: I hereby declare that this research paper is my own and autonomous work. All sources and aids used have been indicated as such. All texts either quoted directly or paraphrased have been indicated by in-text citations. Full bibliographic details were given in the reference list which also contained internet sources. This work has not been submitted to any other journals for consideration.