Results: The results showed that among 110 patients, there were 53 (48%) cases of premature septicaemic and 9 (8%) cases were infected during pregnancy. There were 7 (6%) cases of amniotic fluid contamination. There were 26(23%) cases of risk factors in the womb. 25 (23%) cases of children with multiple symptoms., The positive rates of white blood cell and platelet examination, c-reactive protein examination and neutrophil rod-nucleus/neutrophil examination were 59.64%, 38.77%, 38.6% and 5.66% respectively. Procalcitonin level was positively correlated with c-reactive protein (P<0.01, r=0.7). Among them, 6 (5.45%) cases were positive in blood culture, including 3 (2.72%) cases of staphylococcus epidermidis, 2(1.81%)cases of staphylococcus aureus and 1(0.90%)case of escherichia coli.

Conclusion: The clinical manifestations of neonatal sepsis are relatively concealed, and antibiotics are used reasonably in the early treatment process to deal with the symptoms of the disease and promote the improvement of the treatment effect.

About 1.6 million newborns worldwide die of sepsis every year, and the mortality rate of neonatal sepsis in developing countries is even up to a staggering 63%.1,2 Despite antibiotics and extensive treatment, the mortality rate has not decreased significantly in the last decade or two.3 It is observed that that the smaller the gestational age, the worse is the immune function and an increased susceptibility to infection. Recent research has shown that the death rate due to neonatal septicaemia is second to postpartum asphyxia, preterm delivery and intrapartum complications, with the overall figure being 13% of all newborn children. Most neonates die within one week of infection, accounting for 43%.4

Research has also shown that very low weight children often suffer from nervous system dysplasia, which is positively correlated with sepsis.5 Alshaikh's study had results showing cerebral palsy as a complication in these neonates.6 Studies have also focused on cytokine induced inflammation which can be used as a marker in this population. but these results are still not authentic.7 Local studies have also confirmed that, under the same pathogenic conditions, the proportion of premature infants with sepsis is significantly higher than that of normal infants which makes the prevention and treatment methods variable.8,9 The results of Blood culture may not be very ideal giving a low positive rate which can delay the treatment.10

This study was done to analyze the blood culture and drug sensitivity test results, clinical manifestations, common complications and related risk factors leading to sepsis in neonates. This would provide some new evidence-based support for the treatment of sepsis in neonates.

After admission, CRP (C Reactive Protein), PCT (Procalcitonin), treatment and outcome, complications, clinical manifestations and routine blood tests were recorded in detail in the two groups of children, and blood culture was performed in 110 cases. Aseptic operation was also strictly carried out in this process. Blood culture sites were bilateral femoral vein or bilateral radial artery. After the experiment, the relevant data of the two groups of sepsis children, such as birth weight, whether there is amniotic fluid contamination, whether there is premature rupture of membranes, delivery mode, gestational age, clinical manifestations and complications, platelet count, blood culture results, outcome and drug sensitivity test, were recorded and analyzed.

In this study, SPSS version 16.0 was used for statistical analysis of the experimental data. Independent sample t-test was used for comparision between groups. Measurement data were expressed as mean ± standard deviation. The comparision between groups was tested by Chi square, and the counting data was expressed as percentage or bitrate. Among them, the difference value of P<0.05 was considered statistically significant.

In terms of concurrent symptoms, 6 (16%) cases of premature sepsis (Eosinophil, EOS) were diagnosed with purulent meningitis, 7(19%) had NEC (necrotizing enterocolitis) disease. Four (10%) patients were suffering from septic shock. There were also 5 (12%) cases of MOF (Multiple Organ failure), 29 (39%) with late-onset septicemia (LOS) had purulent meningitis, 16 (22%) patients had NEC. There were 5 cases of septic shock, with 7(10%) with MOF. Statistical analysis of the clinical symptoms of late-onset sepsis and early-onset sepsis showed that the frequency of purulent meningitis in infants with late-onset sepsis was higher than those with early-onset sepsis, p=0.031, showing a statistically significant difference. The complication data of the two types of neonatal sepsis are shown in Table-2. 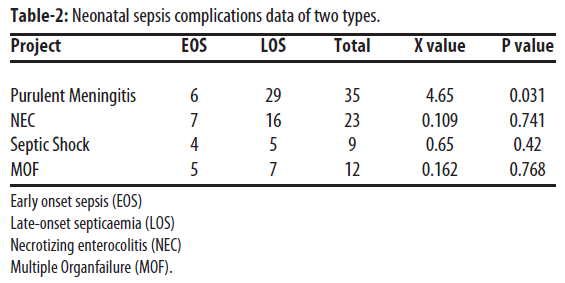 Newborn disease screening is a group work related to the whole society, and all parents are the main participants, but it is also necessary to coordinate the participation of multiple departments. Firstly, all parents must fully realize the importance of blood testing, otherwise it will delay the illness of newborn and cause immeasurable harm and destroy the child's life happiness because of parents' carelessness. Neonatal blood test schematic diagram is shown in Figure-1 (picture from www.baidu.com). 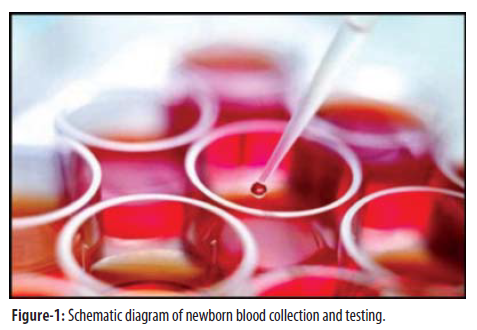 If the newborns with sepsis, often accompanied by crying, children appear weak, listless with, skin spots and temperature instability and other obvious signs of neonatal sepsis in children with symptoms simulation diagram, and often in the short term to cry again, sleepiness, motionless with a poor, complexion, Respiratory abnormalities such as dyspnoea, apnoea, unexplained jaundice, and rapid exacerbations or relapse of jaundice should raise a high suspicion of sepsis.

The white blood cell count of a newborn depends on the age of the child, the accuracy of the specimen on whether the child cries violently, and whether the specimen comes from an artery or a vein. For children with highly suspected infection, in order to ensure early diagnosis and treatment, the principle that I/T method takes precedence over PLT (Platelet) method and PLT method over WBC method should be followed in the examination, as shown in Figure-2. 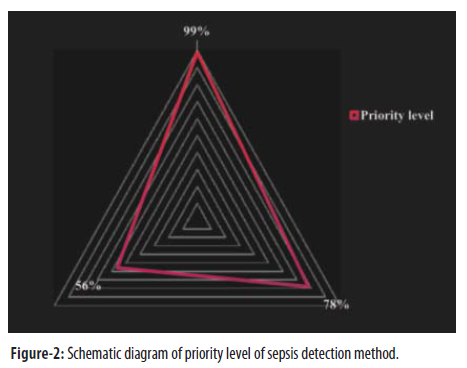 SIRS Has Important Reference Value for the Diagnosis of Neonatal Sepsis

According to this study, all four SIRS (Systemic Inflammatory Response Syndrome) have their own advantages and disadvantages, mainly showing high specificity of heart rate and body temperature, but poor sensitivity. Whether or not respiration is abnormally sensitive, but has poor specificity, showing a complementary pattern as seen in Figure-3. 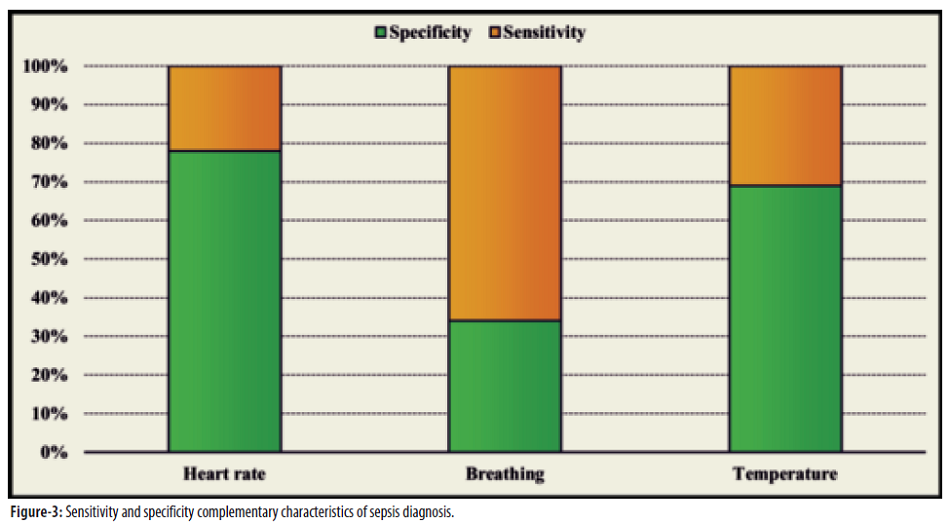 As newborns age, their immune systems develop, but at the same time, poisoning, kidney and rheumatic immune diseases also increase. Therefore, abnormal sensitivity and specificity account for the highest proportion among the four indicators of neonatal SIRS. Specificity and leukocyte abnormality were the highest among the four indexes, reaching 95.4%, followed by positive predictive value reaching 90%, and finally sensitivity index reaching 69.2%. Therefore, when newborns meet the SIRS standard, they should be evaluated in accordance with this standard as soon as possible, which has important clinical value.

As mentioned above, the main clinical manifestations of neonatal septicaemia focus on the abnormal digestive system, respiratory system, body temperature and other aspects. However, the most useful diagnostic information for abnormal response data is sensitivity and specificity. According to these two indicators, the correct diagnostic index can reach 79.7%, which is related to immature central body temperature regulation system, crying behaviour and improper temperature maintenance measures of newborns. Therefore, once the newborn appears abnormal temperature, crying and other behaviour, it is necessary to strengthen vigilance and closely observe the clinical changes, and as soon as possible to carry out the necessary examination, while excluding the common flow of perceptual temperature changes. Research shows that in children with abnormal breathing, digestion, an abnormal body temperature and other anomalies, the probability of its associated with sepsis were 34%, 28%, 33%, 5%, as a result, once appear this kind of abnormal, in addition to the necessary inspection, also need to consider the patient's medical history, related occur outside factors of infection, in order to avoid misdiagnosis. The schematic diagram of neonatal abnormal performance assisting the diagnosis of sepsis is shown in Figure-4. 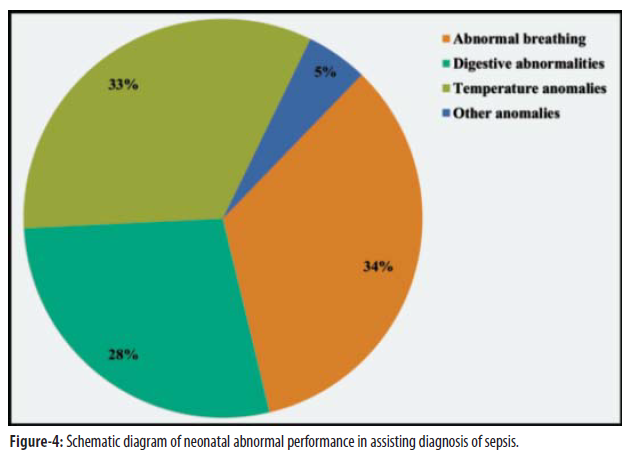 Studies by Hu Xinde and others showed that the PCT and hs-CRP levels in the sepsis group were significantly increased.11 The platelet levels were significantly decreased; the sensitivity of rCT. hs-CRP and platelet diagnosis of neonatal sepsis was 84.8%, 69.7% and 53.0%, respectively. Although the proportion of platelet reduction is not high in this case, the severity of neonatal sepsis clinically indicated a negative correlation between platelet count, that is, the more severe the disease, the lower the platelet count. Platelet count can be used as an important indicator to reflect the severity of sepsis. According to clinical observation, as long as people with sepsis are considered, if they have platelet decline. Finally, they can be diagnosed as sepsis. Research by Zhang Yan et al. showed that the white blood cell count was 93% specific for the early diagnosis of neonatal sepsis, but the sensitivity was only 14%.12 Therefore, for children with normal peripheral blood, it is not possible to rule out infection in general, and blood culture examination and repeated blood routine should be repeated for those who are highly suspected of sepsis.

This study pointed out that MOF, suppurative meningitis and septic shock were common complications of sepsis, and emphasized the key significance of paying attention to and preventing sepsis. The positive rate of neonatal septicaemia blood culture is low, which cannot be used as the basis of clinical diagnosis, but it has important guiding significance for the use of antibiotics. Late onset septicaemia and its complications should be paid more attention to in premature and low weight children. Newborn infants with amniotic fluid contamination, premature rupture of membranes, and asphyxiation must be vigilant against premature sepsis. Because these clinical manifestations are subjective observations, and neonatal patients often have atypical signs and early symptoms are not obvious, the clinician's diagnosis may also show differences. However, it is impossible to deny the substantial effects of abnormal breathing, digestive abnormalities, abnormal body temperature and other abnormalities in assisting the diagnosis of neonatal sepsis, especially in some underdeveloped medical conditions.

Disclaimer: The manuscript has not been published or submitted for publication elsewhere.

11.    Hu X, Liu B. The diagnostic value of PCT, hs-CRP and platelet in neonatal septicemia and their relationship with disease condition. Modern China Doctor 2012;50:56-7.