The torque analysis of lower limbin basketball based on sEMG signal

Methods: In this study conducted from March 1, 2019 to June 1, 2019, 30 professional male basketball players were selected as the subjects, gait analysis was carried out when they finished the three-step layup in 15 minutes. Acquisition and noise reduction process of the collected sEMG signals were first filtered by band-pass filter to eliminate the noise outside the frequency, then suppressed by the spectral interpolation method, and finally subjected to wavelet transformation.

Conclusion: The research results of sEMG signal showed that the torque intensity of the front and back thigh muscles is greater than that of other muscle groups. Strengthening the training is helpful to enhance the jumping ability of basketball players.

sEMG signal refers to the bioelectrical signal recorded from the muscle surface through the guidance of electrodes when the neuromuscular system is active. It has different degrees of relevance with the muscle's active and functional states. Various limb movements are generated by different muscle contraction modes, and the characteristics of sEMG signal are also not similar. Through the analysis of sEMG signal characteristics the different action modes of the muscles can be distinguished.1 According to the above formula wavelet transformation can decompose the signal into weighted sum of wavelet with different scale bases. Because of its translation invariance, the coefficients of wavelet transformation can be directly used as the eigenvector of signal pattern classification. According to the original surface EMG signal of human lower limbs, dmey wavelet is used to decompose each group of nine channel data at multi-level scale, and the wavelet coefficient with the largest absolute value is extracted from each level of wavelet decomposition coefficient as signal feature to form multi-dimensional feature vectors. In this study, the collected sEMG signals were analyzed and processed to identify the intention of sports, and the relationship between sEMG signals and joint torque, which is the basis of basketball training.

A cross sectional experimental study was conducted from March 1, 2019 to June 1, 2019 at the laboratory of sports medicine, Chongqing Three Gorges University, Wanzhou, China.

The research subjects were 30 professional male basketball players, with a mean age of 21.2 ± 1.8 years. 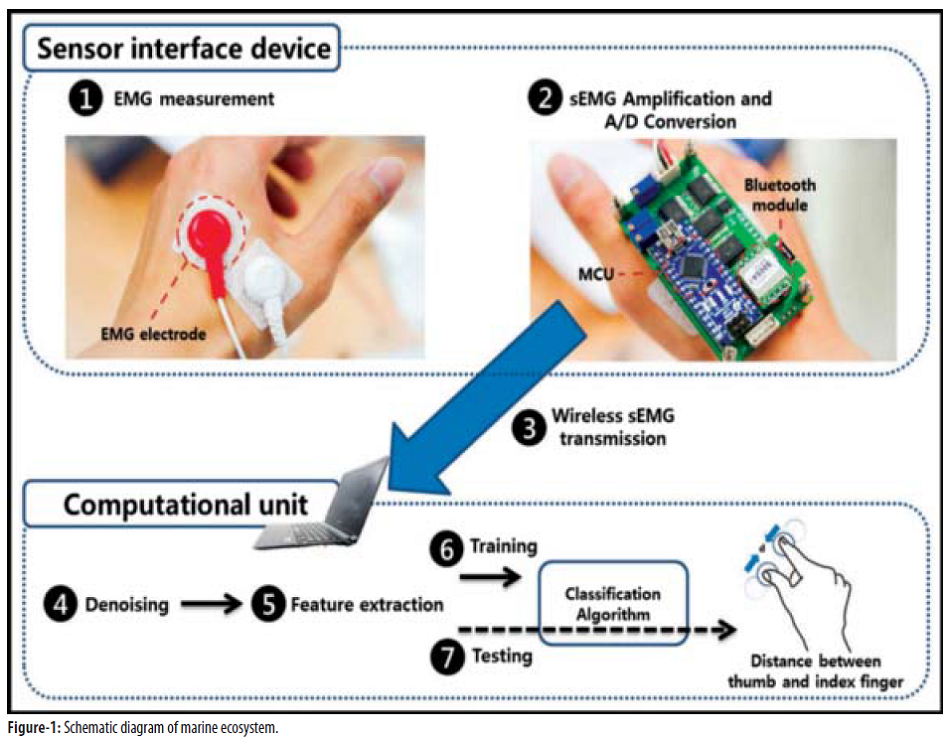 The skin was prepared to reduce the impedance by removing the hair at the place of electrode contact, especially in humid environment or the type of skin prone to perspiration. Gauze was used to clean the skin soaked in 11% Alcohol which removed dead skin and dirt. This cleansed the skin and reduced skin resistance. The electrode was fixed on the skin along the longitudinal direction of muscle contraction as the surface guide electrode, with the distance between the two electrodes being 2 cm. A grounding electrode was attached to the part at a distance from the guiding electrode and had less muscle distribution on the same side of the limb. The connection direction of the two electrodes were placed along the direction of muscle fibers. The electrode channel was then connected with the electrode on the skin surface, and instrument parameters adjusted. The action EMG signal graph was synchronously displayed on the computer acquisition and processing system. Finally, the subjects were relaxed and monitored to observe the baseline position. Signal generation from the multi-channel acquisition system was ensured and the detection of the signals confirmed.12 The muscle strength of legs was increased slowly from weak to strong, and the change of data was observed.

At the end of the experiment, the dynamic data of the force measuring platform, the kinematic data of the system and the EMG signal of the EMG acquisition instrument were collected. Since the dynamometer and dynamic capture system were supporting equipment, relevant mechanical analysis could be carried out by the supporting software COTEX. The sEMG signal collected by EMG measurement was denoised, and then the peak value of sEMG signal under MVC was linearized. The calculated linearization value was approximately equal to the muscle activation degree. 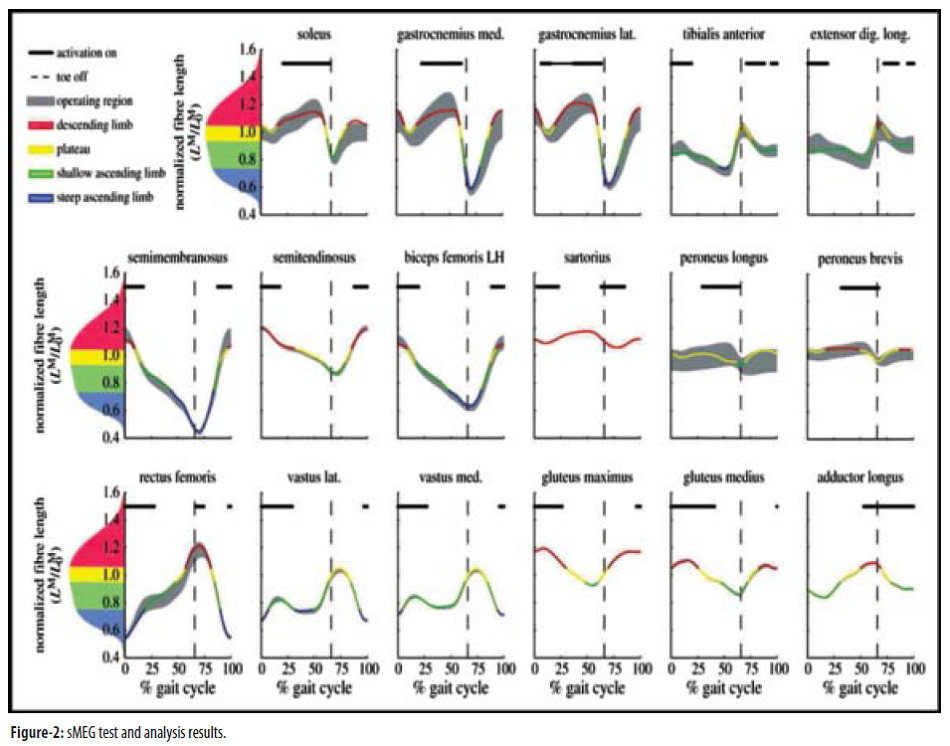 Through curve fitting of the scatter diagram, the joint angle and joint force shows the relationship between movements.

Surface electromyography (sEMG) is to attach electrodes to the target skin to detect single muscle myoelectric activity, multiple muscle or muscle group myoelectric activities and one or more groups of muscle collective myoelectric activities simultaneously. It can collect the myoelectric signals released by muscles in the process of activity, qualitatively and quantitatively, process the myoelectric signals, reveal the pathological characteristics of neuromuscular system and evaluate the function of neuromuscular movement. It assists in the rehabilitation treatment. The reason that sEMG is widely used in rehabilitation medicine and sports medicine is that it has the characteristics of objectivity, real-time and is non-invasive. It has a high detection sensitivity, and can better reflect the level of muscle activity and function. In the process of testing, it was observed that sEMG recording and display potential pattern changes due to the variation of muscle activity. It is non-invasive and convenient to use. It can record muscle EMG signals in a large range, and at the same time, it can better reflect the changes of muscle physiology and biochemistry during the exercise process. In the field of sports medicine, firstly, sEMG detection method can not only evaluate the training level of athletes, but also can be used to measure the fatigue state of neuromuscular system after training of athletes; secondly, the powerful advantage of sEMG signal is not only reflected in the detection of myoelectric response of muscle in the quiet state, but also the continuous detection of muscle state changes in the process of sports. sEMG signal is a random signal, which cannot be accurately described by mathematical function, but the signal law needs to be observed from the statistical aspect.7 Due to the time and frequency location characteristics of wavelet transform, the time-varying spectrum analysis of signal can be realized, the signal can be analyzed in any detail, and it is not sensitive to noise.8 Therefore, wavelet transformation is a powerful tool for sEMG signal analysis. Literature and data show that the effect of 3-5 level wavelet decomposition or wavelet packet decomposition on the classification of basketball action mode is better.

In this study it was observed that the front and back thigh muscle groups produce the earliest movement in a complete step cycle, with the intensity reaching the maximum in a short time. But the duration is relatively short, while the back calf muscle group starts to produce the movement in the beginning and middle of the cycle, and the duration is relatively longer, which is consistent with the muscle contraction intensity and the continuous state felt in our daily jumping exercise. Therefore, it is feasible to analyze the EMG signal of the lower extremity muscle surface by wavelet transformation. At the same time, this study suggests that the short-term burst strength of the thigh muscle group and the long-term and high-intensity contraction of posterior calf muscle group should be emphasized in the daily training of basketball players, which will certainly enhance the ability of lower limb jumping.

This study using sEMG and biomechanics extracted the feature vectors of different movement modes of lower limbs, processed the collected signals by different feature extraction methods based on wavelet transformation, and analyzed the input features of the neural network to recognize the movement modes. The e results show that the joint movement and muscle movement have similar changes in the walking state, judge the intention of basketball players, and lay a theoretical foundation for basketball players' jumping ability.

Limitations: The sample size was not calculated by scientific methods.

Disclaimer: The paper has not been published before.