Methods: Gene polymorphism of two candidate genes Runx2 and IL-15RA were detected by sequencing in 99 OPLL patients of Han population and 98 patients of Mongolian people. Controls included 102 healthy Han people and 104 healthy Mongolian people. The result of sequencing of patients were compared with control subjects to screen loci with significant difference.

Ossification of posterior longitudinal ligament (OPLL) presents symptoms of spinal cord injury and nerve root stimulation in clinical cases. The cause of OPLL is related to the formation and gradually ossification of new heterotopic bone structures in the posterior longitudinal ligament, which leads to stenosis of the spinal canal and intervertebral foramen, further causing compression of spinal cord and nerve roots in aging. However, the pathological cause of OPLL is not clear. Data showed that 70% of the posterior longitudinal ligament ossification occurred in the cervical and only 15% occurred in the thoracic vertebra while no lesion was reported in the lumbar spine. OPLL in Cervical vertebra is one of the main causes of cervical spondylotic myelopathy.1 The prognosis of Cervical vertebra OPLL varies widely, with symptoms ranging from a permanent asymptomatic stable state to a short period of quadriplegia.2 Plenty of clinical studies confirmed that OPLL is a complex disease caused by genetic and external factors. External factors included chronic degeneration, endocrine and metabolic diseases, diabetes, diet, high fluoride and high copper, etc.3 The population of Mongolia has 4.21 million people distributed in Inner Mongolia autonomous region which accounts for 17.6% of total population as shown by figures of 2005.4 Studies on Mongolian genetics mainly focused on the susceptibility genes of Mongolian respiratory disease and cardiovascular disease, and had identified the pathogenic genes of bronchitis, asthma and other diseases. A total of 452 patients with ossification of posterior longitudinal ligament of cervical vertebra were admitted to the spinal surgery department of Inner Mongolian People's hospital from January 2014 to December 2017. Of these, 141 (31.2%) were from Inner Mongolia. At present, there is no report of epidemiological investigation on OPLL in Mongolian people, but as observed, the frequency of OPLL is relatively higher and more severe clinically than other population in this region. Therefore, the study of genetic polymorphism in OPLL in Mongolian people may be beneficial to reveal the association of genes and the disease.

In this study, we sequenced two candidate genes Runx2 and IL-15RA of OPLL patients in Mongolian and Han people in Inner Mongolia. The result of sequencing was used for analysis of gene polymorphism by comparing with the data of healthy people. Four loci of Runx2 and IL-15RA with significant difference were screened in Mongolian and Han people and the relationship determined with OPLL.

It was a comparative study with convenient sampling in which Mongolian patients with OPLL who were admitted to Inner Mongolia People's Hospital form January 2014 to December 2017 were selected as study subjects. Healthy people in the corresponding period were selected as control subjects. All OPLL patients and healthy people lived in Inner Mongolia for over three generations, and they had no relationship, no disease, no history of interracial marriage, no chronic disorders such as hypertension and diabetes, no malignancy, autoimmune diseases and other familial genetic diseases. There were 98 Mongolian OPLL patients, with ages ranging between 39-78 years, (mean age 58±11.9 years). There were 99 cases of OPLL patients of the Han nationality, with ages between 36 to 80 years (mean age 56±10.8 years). Cervical spine CT was performed in all cases to diagnose or exclude OPLL. The control group consisted of 104 healthy Mongolians and 102 healthy Han Chinese with no significant difference in age and gender composition (P>0.05). All cases provided written informed consent for this study.

The comparative study usedGene polymorphism of two candidate genes Runx2 and IL-15RA detected by sequencing in 99 OPLL patients of Han population and 98 patients of Mongolian people. The control subjects included 102 healthy Han people and 104 healthy Mongolian people who were also tested. The result of sequencing of patients were compared with control subjects to screen loci with significant difference.

Primers: Primers were designed according to sequences provided by GenBank. SNP sites and their flanked conservative sequences were target sequences for designing on NCBI. Theoretical annealing temperature Tm was set between 55°C to 65°C; (G+C) content ranged from 40%~70%; Amplified fragment size was less than 800 bp. Primers were synthesized by Shanghai bioengineering company and shown in Table-1.

PCR Amplification of target fragment: Primers were synthesized and DNA templates were determined to be qualified before PCR. The PCR mixture included 1 ml DNA template, 0.5 ml polymerase, 2.5 ml PCR buffer, 0.5 ml forward and reverse primers, 0.5 mldNTPs and 19.5 ml ddH2O. Then the mixture was denatured at 95°C for 3 min firstly, then followed by 35 cycles of denaturation at 95°C for 30 s, annealing at 50-60°C for 30 s and elongation at 72°C for 30 s, the final elongation maintained 10 min at 72°C.

DNA sequencing: ABI's BDT3.1 sequencing kit (BigDye Terminator v3.1) was used for sequencing according to the BDT3.1 operating manual. The alcohol precipitation method in the BDT3.1 manual was used to purify the products, which is then dried and stored at 4°C in dark. The purified dry products were added to 10 ml formamide and fully dissolved for denaturation. Then the denaturation reaction was performed in a PCR apparatus. Finally, samples were sequenced by using 3730XL.

Data analysis: SPSS 18.0 statistical software was used for data analysis. The measurement data of normal distribution was expressed as x±s, Student's T test was used for the comparison of 2 sample means and F test was used for the comparison of multiple sample means. Gene frequency was calculated by gene counting method and genotype distribution was analyzed by chi-square test for detection of Hardy-Weinberg equilibrium. Genotype and allele frequency were compared between groups using chi-square test and OR value and 95% CI were calculated. P<0.05 was considered statistically significant.

Three genotypes of Runx2 and IL-15RA can be detected in all 102 healthy Han Chinese and 104 healthy Mongolian people. Chi-square test was used for comparison of genotypes and allele frequency of these loci, there was no statistically significant difference as shown in Table-2. 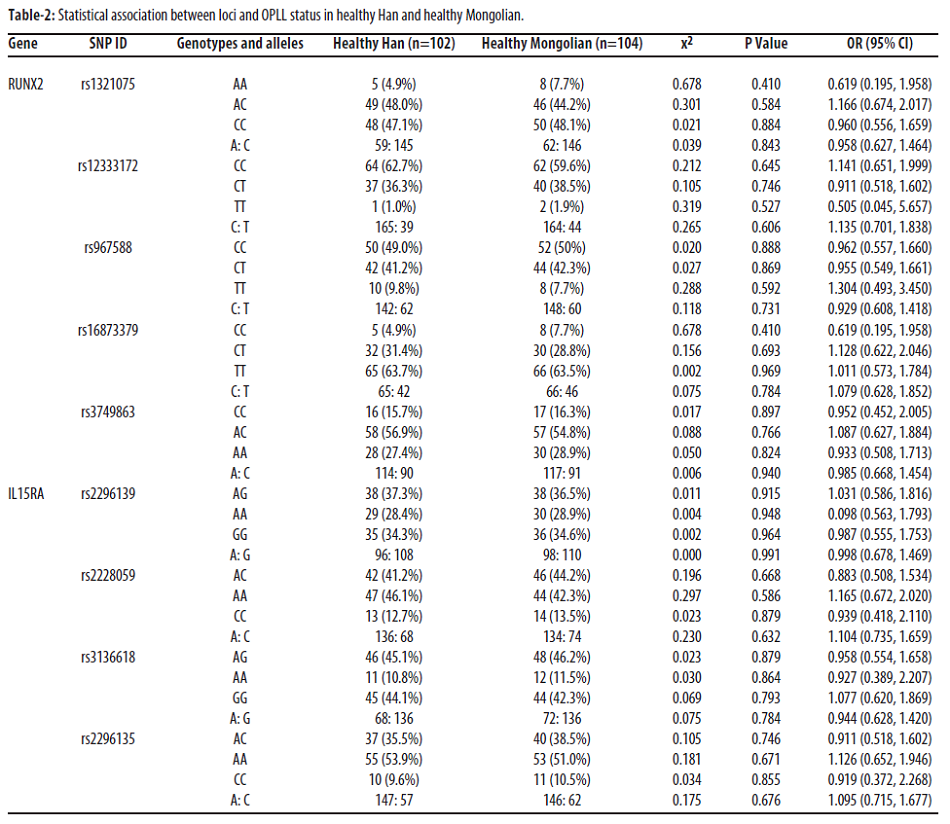 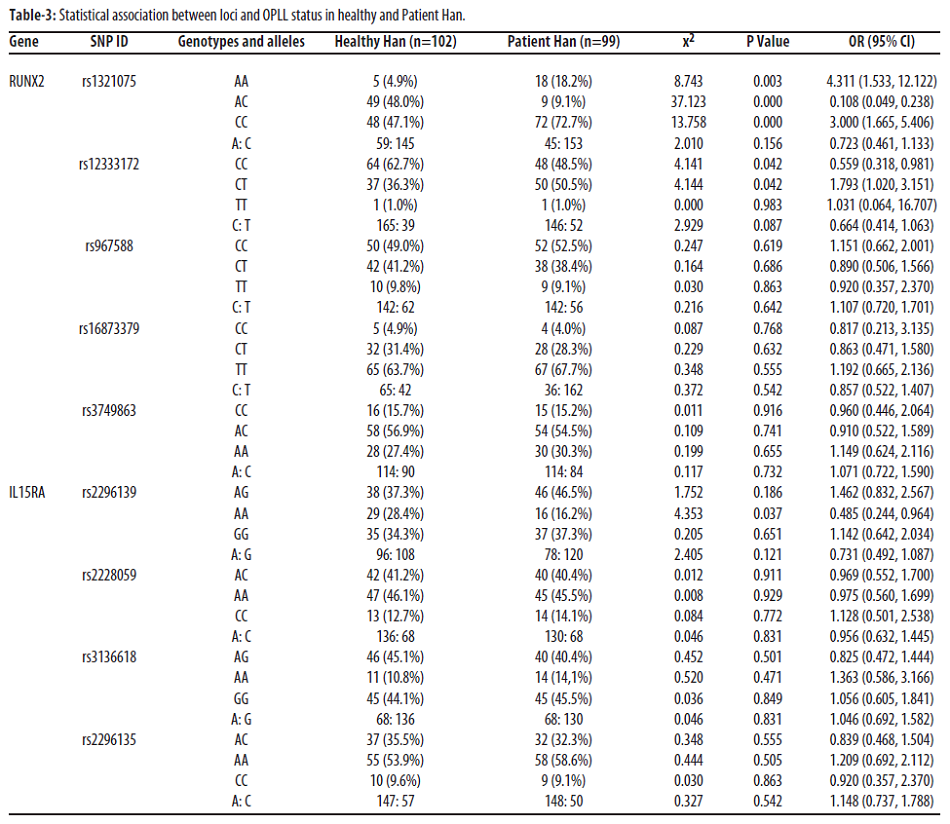 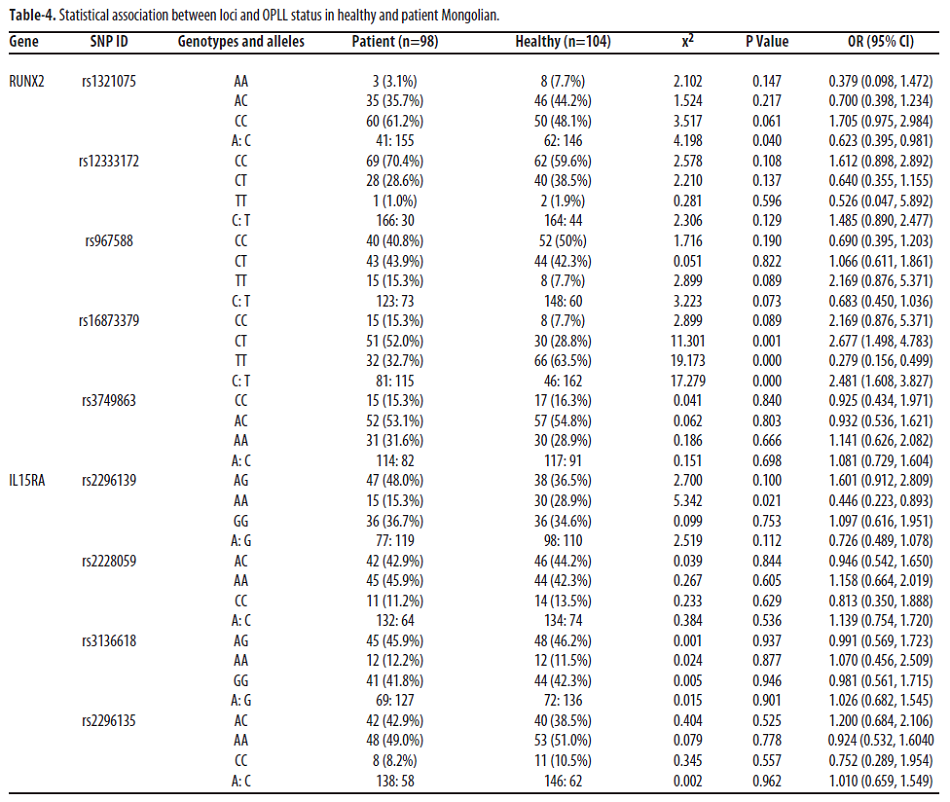 OPLL is a common disease in Japanese and Asians. The prevalence rate is 1.9% to 4.3% in Japanese, 3.6% in Korea and 2.8% in Taiwan Chinese while the prevalence rate is only 0.12% in White people from North America.5,6 Li's study showed prevalence of OPLL in Northern Chinese to be 0.44-8.92%.7 The prevalence of OPLL in the immediate and other relatives of cervical vertebra OPLL patients in Japanese is 23% and 22% respectively in 1981, and in the general population the rate is only 3.7%.8 These results manifest that cervical OPLL may be an inherited disease. In the investigated population, the racial segregation rate in siblings is 0.26, which is greater than 0.25, the theoretical maximum of recessive characteristics. Therefore, OPLL was speculated as a dominant genetic disease. Terayama's9 investigation of 347 families of OPLL patients with a total of 1030 family members showed that the parents of patients with radiological manifestations of OPLL accounted for 26.5%, and 28.89% were in siblings, which was consistent with characteristics of autosomal dominant genes. In 2003, Tanaka et al.10 performed the whole-genome scan of 142 Japanese OPLL patients and the results showed that 1p, 6p, 11q, 14q, 16q and 21q might be the susceptibility gene region of OPLL, and the microsatellite marker D21S1903 located at 21q22-3 had a strong correlation with OPLL. At present, the suspected susceptibility genes of OPLL included 11 a2 (COL11A2) collagen, collagen 6 A1 (COL6A1) and extracellular focal nucleic acid phosphatase/ phosphodiesterase 1 (ENPP1), BMP - 2 (BMP-2), leptin receptor, transforming growth factor b (TGF-b), human leukocyte antigen (HLA), retinoic acid X receptor b (RXRb), estrogen receptor, interleukin 1 (IL-1), Runt related transcription factor 2 (Runx2), angiogenin - 1 (angiopoietin-1) and g-protein coupled with purine receptor P2Y 1 (P2RY1) et al.11 In 2016, Chen et al.12 detected 11 known pathogenic genes of OPLL by target gene sequencing, the results showed COL11A2 conferred to be an OPLL-related gene.

Transcription factors in the Runx family participate in coordination of various processes of cell development, such as cell proliferation, differentiation, and lineage specific differentiation. The name of RUNX gene derived from the developmental regulatory gene runt, which was considered to be a key for early embryo segmentation. Transcription factors of the Runx included Runx1, Runx2 and Runx3. Runx2 is a major regulator of bone development and plays a variety of roles in the regulation and differentiation of osteoblasts and chondrocytes lineages.13 In the soft tissue, mesenchymal stem cells (MSCs) differentiate into osteoblasts and formed bones, matured osteoblasts form osteocytes and bone finally, this process named intramembrane ossification. Runx2 is a specific transcription regulator for differentiation of mesenchymal stem cells into osteoblasts. The differentiation of cartilage is regulated by RUNX2 and RUNX3.13 Kishiya et al.14 detected expression of RUNX2 by DNA microarray, and the results showed RUNX2 gene expression were enhanced in patients with ligament ossification. In the ossified posterior longitudinal ligament cells cultured in vitro, RNAi was used to inhibit the expression of Runx gene, the results showed the expression of angiogenin-1 in ossified cells was significantly down-regulated, while the expression in normal cells showed no significant change. These results suggested that angiogenin-1 promoted the ectopic ossification of spinal ligaments. In Liu's15 study, the expression of COL6A1, Runx2, bmp-2 and VDR4 in 82 OPLL patients and 118 healthy people were detected, the results showed the RS1321075 and RS12333172 of Runx2 were strongly correlated with OPLL.

Interleukin 15 (IL-15) is another important T-cell growth factor reported after IL-2, IL-15 has a wide range of biological activities and has been proved to play a unique role in some clinical diseases. The a subunit of IL-15 receptor (IL-15Ra) is part of the heterologous trimer of IL-15 receptor (IL-15Rabg). Involved in the composition of high specificity and affinity receptors, IL-15a can bind IL-15 with high affinity without the involvement of subunits b and g. IL-15 a is beneficial to immune development and function, the high affinity with IL-15 makes IL15Ra play an important role in signal transduction of IL-15. IL15RA is an important component of proinflammatory signal transduction, which is involved in various physiological and metabolic processes. The expressions of IL-15 and IL15RA increased dramatically in the mild inflammation caused by sports injuries,16 and also increased chronically in some pathological conditions such as rheumatoid arthritis, especially in the synovial fluid.17 Petrovic-rackov et al.18 reported that expression of IL-15 in serum and synovial fluid in patients with osteoarthritis and rheumatoid arthritis were significantly higher than those in patients with osteoarthritis, and the expression of IL-15 is also associated with disease activity. Single nucleotide polymorphisms (SNPs) of the IL15RA gene are associated with bone mass.18 Emanuele Loro's19 study demonstrated that IL15RA was necessary to ensure effective combination of osteoblasts/ osteoclasts, which determined the phosphoric acid homeostasis and mineralization of osteoblasts, especially for mineralization of cortical bone.

Acknowledgment: The authors would like to thank Dr. Zongzheng Liu for technical help. This study was supported by a Grant-in-Aid for Natural Science Foundation of Inner Mongolia Autonomous Region (2017MS08142).

Limitation: The sample size was not calculated by any scientific method.

4.      Guo Q. The Compilation of a Collection of Five Books or Book Series on China's Ethnic Issues. Chinese Science and Technology Journal Database 2008;6:6-6.

7.      Li Z, Wen S. An investigation on the incidence of ossification of posterior longitudinal ligament of cervical spine in patients with neck and shoulder pain in northern China. Chinese Journal of Spine and Spinal Cord 1999;9:126.