Methods: Sixty three patients with primary colorectal cancer were prospectively selected in the Jingzhou Central Hospital from January 2017 to December 2018; all patients were planned for contrast-enhanced CT examination and 20% ASIR incremental reconstruction. For reasons of interest, single- and multi-slice scans and radio-histological analysis were performed: ASIR effects were calculated by multilevel linear regression method.

Conclusion: The incremental level of ASIR can significantly affect the quantification of CT radiohistology of primary colorectal cancer. The second-order statistical and fractal characteristics obtained by single-level analysis can be more variable than those obtained by multi-level analysis.

Radiomics have improved the accuracy of cancer diagnosis and classification. They have been gradually applied in analysing the clinical features, prediction of prognosis, therapeutic scheme making and therapeutic effect evaluation of multiple malignant tumours including non-small cell lung cancer, breast cancer and prostatic cancer.1 Computed tomography (CT) technology has obtained continuous optimization and development in recent years. Iterative image reconstruction algorithm can control image noise while lowering radiation dosage.2 Adaptive statistical iterative reconstruction (ASIR) mainly regards image information gained from filtered back projection as the basis of iterative reconstruction to gain better image quality. Meanwhile, it can reduce 30%-65% of radiological dose and image quality without any obvious loss.3 At present, the reconstructed images gained for CT imaging research are mostly based on pure filtered back-projection technique. Iterative reconstruction technique has been widely applied in CT scanners. The influence of iterative reconstruction algorithm on quantitative image features is closely related to radiomics.4,5 The authors infer that compared with pure filtered back projection technique, ASIR can lead to a significant change of imaging characteristics. In the meantime, as the increment percentage of ASIR increases, such change is more significant. This study aims to explore the effect of ASIR on CT radiomics quantification in patients with primary colorectal cancer, in the hope of providing more reference for follow-up CT imageological examination and result judgement.

Sixty three patients with primary colorectal cancer treated in Jingzhou Central Hospital, China from January 2017 to December 2017 were prospectively selected Inclusion criteria were patients diagnosed with primary colorectal cancer by pathological and imageological examination, had received contrast enhanced CT examination and age between 18-75 years. Exclusion criteria were diameter of tumour<2 cm, glomerular filtration rate<50 ml/minute, allergic to iodinated contrast agent and incomplete data. The study proposal was approved by the Ethics Committee of the hospital, and both patients and their family members signed the informed consent form.

Through contrast-enhanced CT examination and 20% ASIR incremental reconstruction, the tumour area of interest were selected to complete single-layer and multi-layer scan, and the multilevel linear regression method was used to calculate ASIR effect.

The CT image acquisition and reconstruction was acquired by Philips Brilliance 64 CT scanner produced by Philips. Dynamic contrast enhanced scanning was performed. The specific parameters used were as follows: 100 kV; 75 mAs; Z axis coverage 4 cm; scanning field of view 50 cm; matrix 512×512 mm; reconstruction thickness 5 mm; acquisition points of time 35; intravenous administration of 20 mg scopolamine; injection of 50 ml ioversol 320 as the contrast agent at the speed of 5 ml/s, and injection of 50ml normal saline at the same speed; average CTDIVol (138.14±15.74)mGy, and average DLP (552.78±62.13)mGy. When ASIR percentage is 0%, 20%, 40%, 60%, 80% and 100% respectively, reconstruction dynamics of the scanner is acquired, and the independent dataset is established respectively.

Statistical analysis was done with SPSS 20.0 software. Measurement data were expressed with (±s). Multilevel linear regression method was used to calculate ASIR effect. Standardization effect (B) was judged by inter-group standard deviation through absolute regression coefficient/ASIR plus 20U, where B value <0.3, 0.3-0.8, >0.8 is judged as small influence, medium influence and large influence, respectively. Inspection level a=0.05. The sample size was calculated according to the incidence rate. The incidence rate of colorectal cancer is 15%, and the sample size was 49 cases. For accuracy the sample was increased by 20%. Finally, 63 patients were enrolled,

Among all patients, no tumour was found in 2 patients through CT examination, but later they were diagnosed definitely with colorectal cancer by histopathologic examination. In all 56 CT datasets were analyzed with 2D radiomics and 46 CT datasets were analyzed by 3D radiomics. The average diameter of tumours was (5.73±1.71) cm. There were 8 cases with the tumour in the caecum; 4 cases had the tumour in the ascending colon; 14 cases had the tumor in the sigmoid colon and 30 had the tumour in the rectum. According to CT imageological examination and TNM standards of AJCC/UICC,6 18 cases were in T2 phase; 34 in T3 phase; 4 in T4 phase, 32 in N0 phase; 20 in N1 phase and 4 cases were in N2 phase.

The Radiomics analysis showed absolute regression coefficient, standardization effect B value and corresponding P value of first-order, second-order and classification of 2D and 3D datasets as shown in Table-1. 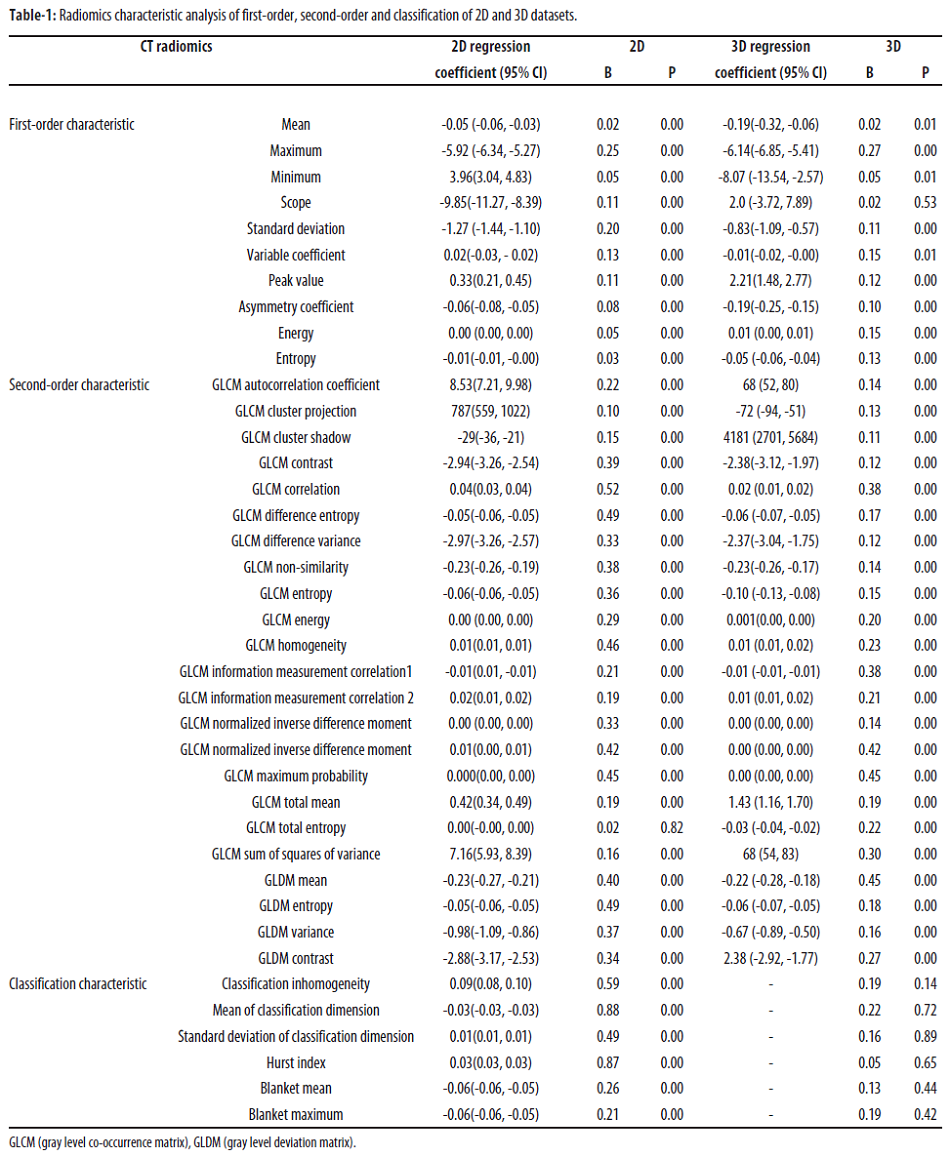 Classification characteristics of 3D dataset are shown in Table-2. 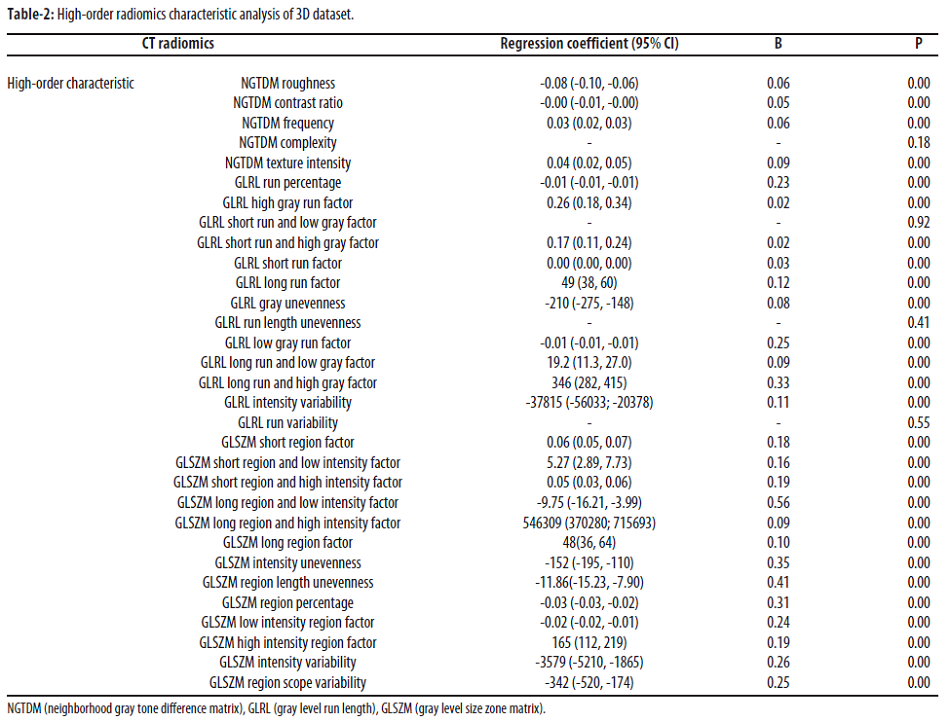 In recent years, numerous clinical studies have verified the value of radiomics in imageological examination of malignant tumours.7,8 But there is still lack of research about the influence of CT image reconstruction due to the change of filtered back projection technology to hybrid iterative algorithm. This study verified that ASIR increment level could lead to significant changes of first-order, second-order and classification features. Such changes present the linear correlation, and are free from the influence of 2D and 3D analysis. The remarkable changes of classification characteristics can only be seen in 2D dataset, and small changes of first-order characteristics can be seen in all datasets. But, second-order characteristic change of 2D radiomics is more influenced by 3D radiomics.

Image analysis and reconstruction by filtered back projection method is one of key parts of CT examination.9,10 However, it is difficult to interpret image noise through such technology due to statistical variation, so low-dose CT imaging is obviously restricted.11,12 As CT scanning equipment develops and improves, and computing power is enhanced, iterative reconstruction algorithm has started to be widely applied clinically in recent years. The mixed algorithm represented by AISR can improve image quality based on reduction of image noise through the combination of analysis and iterative method.13,14 However, it is necessary to notice that a change related to high AISR enhancement exists in the imaging features,15 so the author infers that AISR can change radiomics features, compared with filtered back projection method and AISR weighting.

Some scholars analyzed the influence of quantitative CT data for different reconstruction algorithms, such as finite histogram and second-order GLCM feature. In this study, filtered back projection method, 50% ASIR and model-based iterative reconstruction method were compared. The patients selected had hepatic pathological changes, or kidney stone, and non-enhanced or enhanced CT scanning was conducted under 120 kVP. The model-based iterative reconstruction method showed the largest influence on imaging features. Significant impacts on the standard deviation of first-order characteristics were generated in 50% ASIR, but there was no obvious influence on other types of first-order features or second-order GLCM features.16 The above research differs from the result of this study, mainly because the research design is different and it assesses overall ASIR increment effect, instead of comparison with other methods for single percentage ASIR.

In this study, 56 CT datasets were collected and analyzed. The results showed that significant statistical change of ASIR increment level can be seen in most radiomics features (P<0.05). First-order statistical features were analyzed by single particle and 3D imaging, and their change were relatively small (median standardization effect B=0.08). Second-order statistical features were analyzed by 2D imaging (median B=0.36), and the change level was higher than that of 3D imaging (median B=0.13).24-26 Significant statistical change of classification features could be only seen in 2D imaging analysis (median B=0.49), verifying that reconstruction algorithm change, voxel and gray discretization minimization contribute to improving quantification stability of CT radiomics features. But some limitations also exist in this study:  The sample size was too small, but the parameter indexes collected were fixed, including KVP, MAS, reconstruction algorithm and voxel size. Thus, centralized analysis of the influence of reconstruction algorithm could be achieved; the images of other iterative reconstruction algorithms are not assessed in this study, which is mainly because they cannot be acquired in the research process. More in-depth exploration is required in the follow-up.

6.      Yao HW, Wu HWi, Liu YH. The eighth edition of the Joint Committee on cancer of the United States and its "prognosis and prediction" evaluation system. Chin J Gastrointest Surg 2017:20:24-7.