Objective: To study the application of ultrasound-guided indwelling epidural catheter in painless labour.

Methods: A total of 300 single-foetus cephalic position and full-term primipara who did not implement labour analgesia under the same conditions were randomly selected. According to the principle of random grouping, 150 pregnant women who requested and signed the informed consent for labour analgesia were selected as the analgesic group (group A). The other 150 pregnant women who experienced natural delivery without any analgesic measures were categorised as the control group. In the analgesic group, epidural anaesthesia was used when the uterine orifice reached 2.5 cm. The pain grade, motor nerve block, uterine contraction, foetal heart rate and the time of the first stage of labuor were recorded.

Results: The results showed that the group receiving epidural block had lesser pain compared to the control group. The duration of first stage of  labour  of the analgesic group was significantly shorter than the group without analgesia.. There were no significant differences in the degree of motor nerve block, uterine contractions and foetal heart rate between the analgesic group and the control group.

Conclusion: The use of ultrasound-guided first stage indwelling epidural catheter had a significant effect in causing painless labour in the parturient.

The concept of labour pain in a pregnant woman has always been accepted as an inevitable process. It was never thought that this pain could be alleviated. The severe pain during labour can make the parturient tense, anxious and even fearful, and causes a series of neuroendocrine reactions, such as the increase of catecholamine secretion in the blood, the further increase of adrenaline secretion, resulting in vasoconstriction and the decrease of blood perfusion in the uterus and placenta, which easily leads to foetal intrauterine ischaemia and hypoxia.1-3 At the same time, pain can cause maternal hysteria with increased ventilation resulting in respiratory alkalosis, obvious decrease in partial pressure of carbon dioxide, left shift of the oxygen deviation curve, and reduction of oxygen supply capacity.4 The increased production of acidic substances eventually attributes to metabolic acidosis, acid-base imbalance in maternal and foetal systems and internal environment disorders. All these changes can  can have adverse effects on mothers and infants.5,6 Good labour analgesia is essential because it can effectively relieve maternal pain and alleviate the adverse reactions caused by euphemistic pain. The ideal labour analgesia should have the following characteristics: safe and reliable, no adverse effects on the mother and infant, easy drug use, quick onset with a longer duration of action, only blocking the sensory nerves with no effect on motor nerve and no action on uterine contractions and maternal exertion. The parturient can keep awake during the whole process of labour analgesia and participate actively. If the need for surgery arises, the same analgesia can be utilized.7-20 Epidural anaesthesia has a quick onset, exact and specific analgesic effect and low incidence of adverse reactions. However, the effects of epidural anaesthesia on the progress of labour, mode of delivery and rate of oxytocin use vary in different studies. This study included a total of 150 primipara who received labour analgesia, while 150 primipara without labour analgesia under the same conditions were selected as controls. The effects of efficacy and safety of labour analgesia on labour process, motor nerve block, uterine contraction and foetal heart rate were observed.

Labour pain is one of the most severe pains that most women experience in their lives. This pain can cause a series of neuroendocrine reactions that can lead to imbalance of the internal environment of the mother and foetus. In order to reduce the adverse effects of this pain on the mother and foetus, alleviate the pain in the process of delivery, improve the prognosis of mother and child, and improve the quality of obstetrics, labour analgesia is imperative. The emphases of research on labour analgesia are different. Wang Xiaomei et al. observed the effect of nitrous oxide (laughing gas) inhalation on labour analgesia, the influence of related factors and explored the clinical feasible scheme of nitrous oxide in labour analgesia. They found that nitrous oxide inhalation analgesia in labour had good analgesic effect, not only shorten the active period, but also did not cause foetal distress and did not increase the postpartum haemorrhage. Moreover, it did not affect the mode of labour, neonatal score, parturient and infant analgesia. It also has no adverse effects, is simple and convenient, and pregnant women are willing to accept, which is an ideal method of labour analgesia, worthy of clinical promotion. Wang Lina et al. evaluated the clinical efficacy and maternal and infant safety of electro-acupuncture point labour analgesia by single-blind and clinical randomized concurrent controlled trial, so as to provide a safe and effective analgesic method for obstetric clinic. Zhang Wei et al. tracked and compared the effects of water analgesia and remifentanil intravenous controlled analgesia and traditional delivery in primipara labour analgesia, and explored the effect of water analgesia on the improvement of pain during labour, especially the occurrence of severe pain and cumulative time. It was found that the NRS score of the traditional group was significantly lower than that of the water group after analgesia. The most painful point of the water group was lower than that of the traditional group, and the cumulative time of severe pain in the water group was shorter than that of the traditional group. Li Haiyan et al. observed the clinical effect and feasibility of percutaneous electrical nerve stimulation in labour analgesia. They also studied the effects of percutaneous electrical nerve stimulation (PENS) on maternal stress hormones (ACTH and COR) in different stages of labour, mode of labour, total bleeding volume during labour and 24 hours after labour, fetal Apgar score, and amniotic fluid characteristics. It was found that PENS can reduce the VAS score of parturient after analgesia and has a certain analgesic effect. Gao Yunfei et al. studied that adding opioids (fentanyl or sufentanil) into epidural and subarachnoid space could reduce the dose of local anaesthetics (ropivacaine), reduce the degree of motor nerve block, and enable parturient to get out of bed after the labour process, namely walking labour analgesia, which was the closest to the ideal state. This research aims to study the application of ultrasound-guided epidural catheter indwelling in painless labour.

Under the same conditions and no labour analgesia, a total of 300 primiparas with single-head position and full-term delivery was randomly selected as subjects. According to the principle of randomized grouping, 150 pregnant women who actively requested labour analgesia and signed the informed consent for labour analgesia were selected as the analgesia group (group A). The other 150 pregnant women experienced natural delivery without any analgesic measures were categorised as control group (group B). There was no significant difference in age and gestational week between the two groups. No other systemic diseases, obstetric complications or contraindications of anaesthesia were found in the selected subjects. Those having head-pelvic disproportion and significantly prolonged latency during labour were excluded. Informed consent was signed by all patients or their families and this study was approved by the Ethics Committee of Taizhou Hospital of Zhejiang Province.

In analgesic group, the parturient entered the latent period. During the first stage of labour, the parturient underwent epidural block anaesthesia when the opening of the uterine orifice was of 2-3 cm wide. The left knee was flexed to the chest, the normal saline was infused through the open venous channel, and epidural puncture was performed between L2-3 and L3-4. It was proved that after entering the epidural space, the epidural puncture needle was replaced by a catheter 2-4 cm to the head and fixed properly. The first drug was given in a dose of 7-10 mL of the prepared anaesthetic, and the distal catheter was connected with the analgesic pump. The narcotic drug formulation was a mixture of low concentration of ropivacaine and fentanyl, and the level of anaesthesia was regulated at T10. After about 60-90 minutes of epidural anaesthesia, the effect was reduced. The drug was continuously delivered by the analgesic pump into the epidural cavity at the speed of 6 mL/h. The locking time was 15 minutes, and the single dose was 2mL. The injection was stopped after the cervical orifice was fully expanded. The control group was given routine obstetric treatment without any extra measures. The analgesic effect, motor nerve block degree, the first, second and third stages of labour, labour mode, foetal heart rate monitoring results, postpartum haemorrhage, side effects and complications were observed and recorded. The maternal blood pressure, pulse, respiration and oxygen saturation were automatically monitored during the whole labour process. 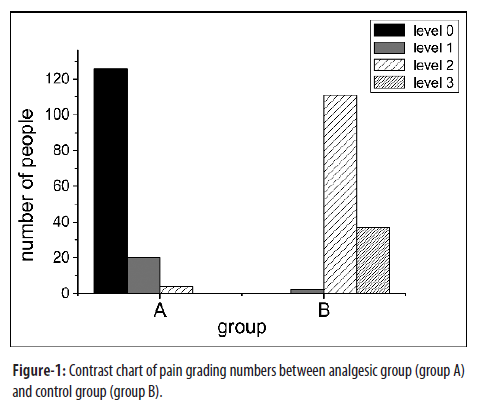 The comparisons of uterine contraction and foetal heart rate between analgesia group and control group were displayed in Table-1. 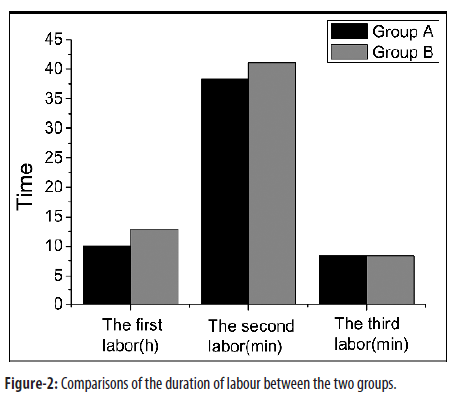 The results showed that epidural anaesthesia for analgesic delivery could significantly shorten the duration of labour.

In this study, the first stage of labour was cervical dilatation that began with regular uterine contraction for 5-6 minutes and ended with cervical opening. The cervix of primipara was tighter and the lower segment of the uterus dilated slowly, which took about 11-12 hours. The cervix of the multipara was looser and the uterus mouth dilated faster in about 6-8 hours. The pain mainly originated from the regular contraction of the uterus and the dilation of the lower uterus and the cervix os. The second stage of labour was foetal delivery. It took about 1-2 hours for the primipara to complete the opening of the uterine orifice until the foetal delivery. The pain was mainly caused by the descending foetal head pressing on the pelvic floor tissue and perineal expansion. The main innervating nerves were the perineal branch of the inferior rectal and posterior femoral cutaneous nerves, the dorsal nerve of the clitoris and the genitofemoral nerve of the somato-abdominal nerve, which were introduced through the sacral 2-4 nerves. The severe pain and anxiety during labour could cause complex psychophysiological stress reactions in the puerpurium. These resulted in a series of changes in the nervous and endocrine system of the woman's body as sympathetic nerve excitation, increased catecholamine secretion and inconsistent uterine contraction. These slow down the rate of cervix expansion, thus affecting and hindering the progress of the labour process and leading to a delayed delivery time.

Labour analgesia can help expectant mothers to be free of pain, reduce the fear of childbirth and postpartum fatigue, and let them rest in the first stage of labour for a long period. When the cervix is fully dilated, the woman has enough strength to complete the labour due to the accumulated physical strength.