Objective: To explore the clinical effect of comprehensive rehabilitation nursing intervention on hemiplegia patients in the sequela stage of stroke.

Methods: Patients with knee reflex after stroke were divided into the treatment group and the control group. Patients in the control group received Activities of Daily Living (ADL) training. Patients in the treatment group received comprehensive rehabilitation training in addition to the ADL training of the control group, including joint flexion and extension training, active resistance training, low-frequency electrotherapy, and standing training. The knee reflex angle and ankle dorsiflexion angle of patients in both groups were measured before and after 4 weeks of treatment. Also, the Manual Muscle Testing (MMT) scale, the modified Ashworth scale, the Fugl-Meyer assessment (FMA), and Barthel index (lower limb) rating scale of patients in both groups were compared.

In modern society aligned with the improvement of people' s living standards, people are not only concerned about food, clothing and warmth, but also the pursuit of quality. Health had attracted people's attention utmost. Stroke is a common and frequently-encountered disorder in a clinic. Its morbidity, mortality and disability rate are at the forefront of all diseases in China. The incidence of stroke in China was 219/100000, and the disability rate was as high as 83%.1 Studies showed that stroke occurred above the level of the cerebral cortex, basal ganglia, thalamus and upper pontine. Due to this the cortical excitatory impulses cannot reach the contralateral cerebellar hemisphere's granular cells through the ipsilateral pons, thus resulting in the decrease of the contralateral cerebellar hemisphere activity causing functional inhibition.2 Hemiplegia is caused by a part of the brain becoming dysfunctional and is characterized by incomplete or complete loss of voluntary movement of one side of the body.

The concept of Fast track surgery (FTS), or Enhanced recovery after surgery (ERAS), is to reduce the psychological trauma of patients in the perioperative period, speed up the recovery after operation, shorten the hospitalization time and expenses.3 It is a multi-disciplinary collaborative medical care model based on evidence-based medicine and laparoscopic minimally invasive surgery. Rehabilitation nursing is an important part of the therapy. An interactive relationship with patients and their family members can be formed through daily, direct and continuous nursing. This can prevent complications, gradually achieve self-care, and constantly improve the quality of life.4,5

Sample size calculation: The calculation equation of the comparative sample content using the average of two samples was as follows:

Patients: From February 2017 to December 2018, 50 patients with knee regurgitation after stroke who were treated in rehabilitation center of Hebei University of Engineering Affiliated Hospital were selected, which includes 28 males and 22 females. CT or MR1 showed 19 cases of unilateral cerebral haemorrhage and 31 cases of cerebral infarction. The ages ranged between 38 to 75 years. All patients met the diagnostic criteria of cerebrovascular diseases approved by the Chinese Society of Neuroscience and were confirmed as the first case by CT or MRI. Fifty patients were randomly divided into control group (25 cases) and treatment group (25 cases). Informed consent was signed by all patients or their families and this study was approved by the Ethics Committee of Affiliated Hospital of Guizhou Medical University.

Inclusion criteria: Patients had to meet the diagnostic criteria for stroke with their ages between 18 to 75 years irrespective of gender. All patients were confirmed by CT or MRI. The course of the disease was less than 4 weeks. Patients showed unilateral limb hemiplegia and they could stand. The quadriceps femoris muscle strength of the patients was greater than or equal to grade 3. The knee joint over-extension angle was greater than 5° when the affected limb was loaded, whereas the knee joint over-extension angle was 0°~10° when the healthy limb was loaded. The patients had no severe cognitive impairment, no sensory aphasia, and they could understand the basic instructions. The condition was basically stable. There was no other serious heart, brain, kidney diseases, severe malnutrition, and thrombophlebitis. They volunteered to participate in this study. Exclusion criteria: Patients had a history of stroke, transient ischaemic attack, reversible ischaemic neurological disorders, excluding cerebral embolism, brainstem infarction, bilateral infarction, and subarachnoid haemorrhage. Before onset, the patients had diseases which were affecting lower limb sensation and movement, such as rheumatoid arthritis, lumbar disc herniation, various skin diseases, lower limb trauma, diabetes mellitus and other peripheral neuropathies. The patients who were over 75 years age were also excluded. Pregnant women and mental disorders who could not cooperate during the treatment were excluded.

The control group: ADL training was performed on the control group given completing basic nursing care. Patients were required to transfer and apply the retained or regained functions in time to their daily lives. With the assistance of family members and escorts, patients were given eating training, personal hygiene training (including face washing, hand washing, and tooth brushing), bathing training, training in wearing clothes, bed transfer training, and toilet training in wheelchairs. The daily routine care was given once a day and 5 times a week.

The treatment group: Comprehensive rehabilitation training was performed in addition to the ADL training of the control group. Firstly, joints were stretched and squeezed to promote the recovery of deep sensation of lower limbs. Secondly, in prone position, the knee joint of hemiplegic side was flexed and stretched at 15°~30° to avoid compensatory movement of hip joint. Thirdly, quadriceps femoris muscle strength was strengthened by assisted-active-resistance training. Fourthly, low frequency therapy by using the KT-90A type nerve injury therapeutic instrument produced by Beijing Haidian Kangda Medical Instrument Factory. The low frequency modulation wave was square wave, and the frequency was 0.5-5Hz. There were two groups of channels. Patients in supine position: A group of polar plates was placed at the medial femoral muscle and quadriceps femoris abdomen at the knee joint, respectively. The prone position of the patient: The polar film was re-grouped and placed on the abdomen and the lower limb cochineal muscle (the strength of quadriceps femoris is 1/2 of the strength of cochineal muscle) according to the patient's tolerance. Fifthly, quadriceps femoris and cholangiomuscles contracted alternately, rhythmically, stably and resistively. The duration of each contraction was 10 seconds and the relaxation time was 2 seconds. Sixthly, the patients took a standing position. The healthy limbs were placed on the steps. The affected knee was flexed and stretched for 10 seconds at the flexion of about 15°. Then, some straightening exercises were done to keep it in the 0-5° flexion state. Attention was paid to the lower limbs of the affected side, so as to avoid the center of gravity from moving forward. Appropriate assistance could be used to prevent overextension of knee joint. Finally, standing training was conducted on the 20° slope, and attention was paid to knee joint control when standing. The training intensity of both groups was once a day, 50 minutes each time, 6 times a week, and the total course of treatment was 4 weeks.

Comparative analysis of basic data of patients: From Table-1, is be seen that the age, course of disease and gender of the two groups were statistically compared.

Analysis of changes of knee reflex angle and ankle joint angle before and after treatment in two groups: From Figure-1, it could be seen that the collected data were statistically analyzed, and the correlation histogram between the observation indexes of the treatment group and the control group was obtained. 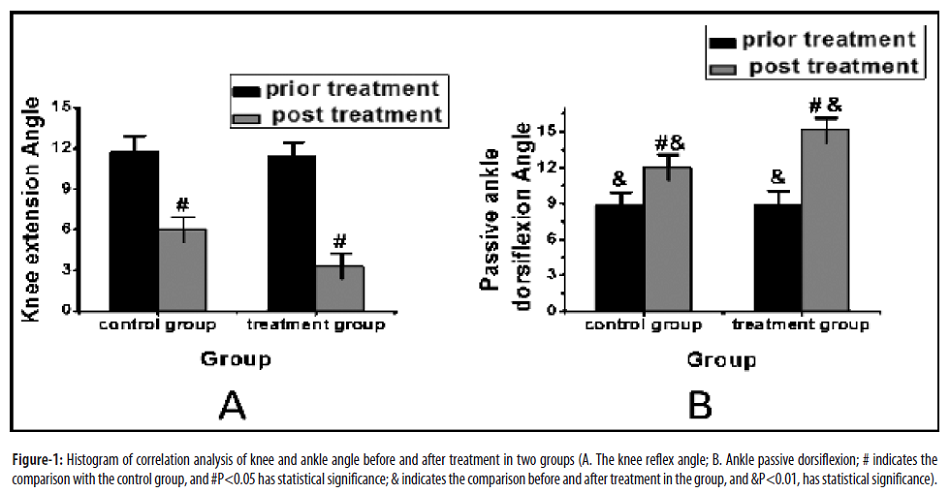 Figure-2 shows a histogram of Ashworth and MMT grading of treatment and control groups.

Figure-3 displays a histogram of Fugl-Meyer and Barthel integrals of treatment and control groups. 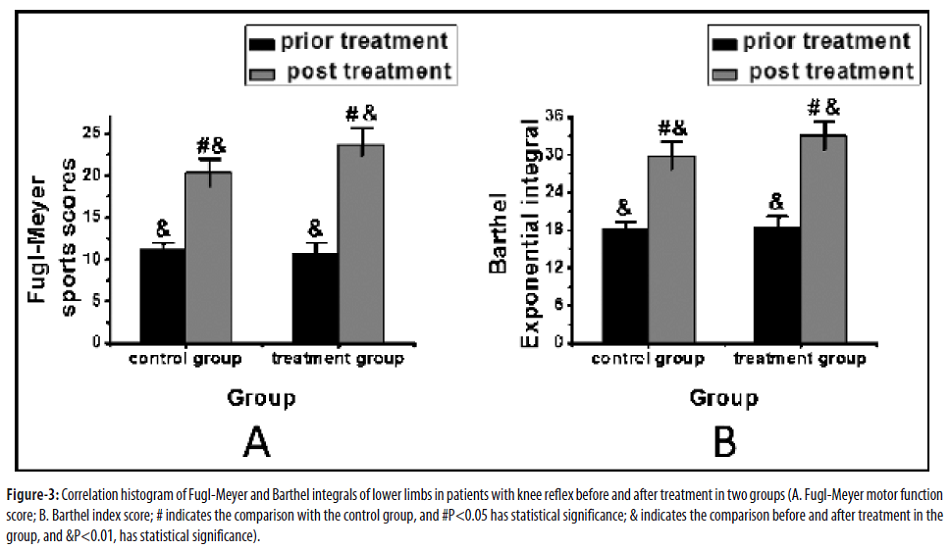 In recent years, the incidence of stroke has increased significantly. Hemiplegia after stroke is a common complication with long-term adverse consequences. Many studies have shown that comprehensive nursing can be an effective intervention for hemiplegia rehabilitation after stroke. Huang research group explored the effect of comprehensive body position guidance and exercise range training through the educational video of prevention and function improvement of shoulder joint injury in hemiplegia after acute stroke. It is found that in the process of rehabilitation in the hospital of subacute stroke patients, the comprehensive position guidance and exercise through educational video can improve the recovery of hemiplegia patients' movement and limit the shoulder joint injury.21

Hemiplegia in the sequelae of stroke belonged to the upper motor neuron paralysis. The patients had abnormal movement patterns such as spasm, abnormal posture, common movement and joint reaction. Because the spinal cord motor cells lost the control of the superior motor center, the reflex activity changed and the muscle tension produced, and the lower primitive reflex reappeared. Therefore, it was necessary not only to treat patients by restoring muscle strength, but also establishing random and coordinated normal movement, breaking the spasm mode, and then promoting the reconstruction of muscle motor advanced neural control.22 Otzel et al. proposed that neuromuscular function could be coordinated through rehabilitation training of static and dynamic balance functions of single leg standing position.23

In the analysis of the changes of knee and ankle angle before and after treatment, it was found that there was a significant difference between the two groups of patients after treatment. This showed that the comprehensive rehabilitation training proposed in this study had a good effect in controlling spasm and improving knee tension. Deschenes et al. proposed that "slope training" was a simple and easy treatment method to improve knee reflexes. It could not only control the spasm of triceps crus for improving contracture, but also train for centripetal contraction, which was consistent with the results of this study.26

Stroke rehabilitation requires a large team of sustained and coordinated efforts, to achieve the goals. Family, friends, and caregivers as doctors, nurses, physical and occupational therapists, speech pathologists, entertainment therapists, psychologists, camp therapists, social workers and others are helpful who maximize the effectiveness and efficiency of rehabilitation. This may sound expensive but it is an important aspect of stroke care.

Source of Funding: This work was supported by contributing authors University through internal research grant.