Methods: A total of 100 primiparas were randomly selected in this study. They were divided into postpartum nursing intervention group (50 cases) and control group (50 cases). The data from prenatal and postpartum women were collected through questionnaires. The Edinburgh postpartum depression scale, social support scale, general self-efficacy scale, and mother's role adaptation questionnaire were distributed to 100 pregnant women. By collecting the results of these questionnaires, the differences between the nursing intervention group and the control group were compared.

Results: The results showed that the proportion of postpartum depression in 50 primiparas after postpartum rehabilitation nursing was significantly lower than that of the control group. The physiological and psychological changes of primipara after childbirth would be significant, and would be subject to tremendous pressure from all aspects.

Under the tide of economic globalization, competition has increased with a rise in social development. Women are increasingly participating in international affairs. The legal status of women has risen thus providing extra responsibilities and pressures.

With these additive factors, postpartum depression has become one of the common negative emotions in puerperal women.1 With the acceleration of life rhythm, women play a double role of taking care of their families and work at the same time. The various life, economic and work pressures they face are increasing, which has lead to an increase in the frequency of postpartum depression.2 The rise in postpartum depression will not only affect the physical and mental health of the mother, but also affect the development of infants and children. This can result in adverse consequences and can even lead to thoughts of maternal suicide or infanticide.3 As medical models and living standards continue to increase, the demand for perinatal care and neonatal health knowledge among pregnant women is also increasing. Compared with previous help provided by  midwives, now most primiparas have poor self-care ability and low mental health.4,5 A primipara experiences the first birth of her baby, she lacks the knowledge of normal pregnancy, childbirth, childcare, along with an inadequate psychological preparation. During pregnancy, the primipara is taken care of by relatives and remains happy. After childbirth, the relatives tend to shift their attention to the infant and the mother feels neglected and is prone to depression.6

A total of 100 cases of primipara (obstetric delivery) were selected from the Second Affiliated Hospital of Shaanxi University of Traditional Chinese Medicine.

The sample size was calculated by the formula (1)

where ua represents the standard normal difference corresponding to a level, ub denotes the u value corresponding to type II error probability b, d indicates the difference between the mean values of the scores of the two groups of primiparas on the Edinburgh Postpartum Depression Scale (EPDS), s suggests the estimated value of the overall standard deviation, which is replaced by the sample standard deviation S, and the larger one is selected. According to the pretest results, d=6.15, S=8.81, a=0.05, ua=1.96, b=0.10, ub=1.282, and n1=n2=44 cases. Considering about 15% of the sample loss rate and no response bias, the corrected sample size was calculated as 50 cases in the experimental group and 50 cases in the control group.

They were divided into intervention group (50 cases) and control group (50 cases) according to inclusion and exclusion criteria. Informed consent was signed by all patients or their families. This study was approved by the Ethics Committee of the Second Affiliated Hospital of Shaanxi University of Traditional Chinese Medicine.

The inclusion criteria were single-foetal primiparas aged 20-34 years with normal 30-42 weeks of pregnancy. The pregnant woman was taken care of by the relatives during  puerperium. The family were educated with the ability to write. The maternal women and their families volunteered to participate in the study, signed informed consent, and were randomly grouped.

The exclusion criteria were, women with a history of mental illness or family history of mental illness or receiving relevant treatment. Severe organ diseases and chronic diseases during pregnancy or before pregnancy (such as chronic hypertension, chronic pulmonary diseases, heart disease, diabetes or liver and kidney diseases) were also excluded. The women with complications such as postpartum haemorrhage, uterine rupture or amniotic fluid embolism during or after preterm delivery were also excluded. HIV-positive, syphilis-positive, hepatitis, active tuberculosis and other infectious diseases were also not included. Other exclusion factors were those who refused breastfeeding or live with the infant due to maternal and infant health factors. Finally those women with pregnancy complications, emotional instability, mental disorders and who refused to communicate with survey personell and those who had experienced major stress events in the past three months were excluded.

A general information questionnaire for primipara before and after delivery was designed by the research team and the related obstetric nursing experts. After repeated revisions and examinations, it was subjected to a pre-test. It included the situation of pregnant women, their spouses and new-borns. The basic framework was formed from a large number of documents and was reviewed by the invited obstetric nursing experts. Specific contents included the age of primipara, the only child, the educational level of husband and wife, occupation and family income, the history of adverse pregnancy and childbirth, the mode of delivery, if the pregnancy was planned, what was the baby's gender expectation, sleep quality, husband-wife relationship, mother-in-law relationship, neonatal feeding and health status.

Edinburgh postpartum depression scale: Edinburgh postpartum depression scale (EPDS) was developed by Cox et al.17 which has a good reliability and validity. EPDS was used for screening postpartum depression. In 1998, it was translated into the Chinese version and has been applied in domestic research. The internal consistency reliability and content validity was 0.76 and 0.93, respectively. The scale not only screened depression during pregnancy and postpartum, but also evaluated the effect of maternal depression. The revised EPDS contained10 items, each of which was divided into four levels, and each item was assigned 0-3 points. Among them, 1, 2 and 4 items were positive scoring, and the other 7 items were reverse scoring. The total score for each item was 0-30. The higher the score, the more severe the degree of depression. From the findings, the EPDS total score of > 13 indicated positive postpartum depression screening and patients with varying degrees of depressive disorders. In this study, the scale was used as both screening tool and scoring scale.

Contents and methods of intervention: The control group received routine nursing care. During maternal hospitalization, the symptoms of mothers and infants were observed before and after delivery. Medication management, psychological nursing, rehabilitation diet and exercise education were carried out. Breastfeeding, neonatal bathing and touching were also necessary. Skin, buttocks and umbilical care were conducted. Neonatal stress response, facial colour and urine were observed to judge whether the baby was warm or cold. Primipara were given face-to-face education and handbooks. Before discharge they received guidance for a postnatal visit fourty-two days after delivery.

The intervention group adopted a more in-depth post-partum rehabilitation nursing model. The psychological and physical status of primipara and the problems encountered were assessed. A preliminary intervention plan was worked out with primipara and their families, so as to guide their families to actively participate in the care of their mothers and newborns, to build trust with each other, and to encourage primipara to do their own work as far as possible for the care of their newborns. This improved the ability of self-care. Child-rearing confidence and self-satisfaction could be enhanced to promote the adaptation role of the mother.

In the process of implementation, the method of explanationg guidanceg practiceg guidanceg practice was used to explain and demonstrate the knowledge and skills if the primipara and their families had failed to grasp. Health education on postpartum depression was carried out among family members to understand the mental health status of puerpera as well as their families. According to the EPDS survey results, the key psychological guidance was provided to the puerpera.

All the data in the study were analysed by SPSS 18.0 statistical software in the Chinese version, with P < 0.05 as the statistical significance. The statistics of general data were expressed by frequency and percentage, and the measurement data were described by the mean standard deviation. The correlation between social support, self-efficacy and prenatal depression level of primipara was analysed. The balance test of general data of primipara in the two groups was analysed by two independent samples t-test and chi-square test. The postpartum depression situation of the two groups of primiparas was compared. The changes in the social support level and self-efficacy were evaluated by repeated measurement variance analysis. Two independent samples t-test and chi-square test were used to compare the differences of postpartum depression score, social support level, self-efficacy and maternal role adaptation between the two groups in order to evaluate the intervention effect.

As shown in Figure-1, age, an only child, pregnancy planning, sex expectation of the baby, the relationship between husband and wife, sleep quality, delivery and feeding mode were not significantly different (P > 0.05). 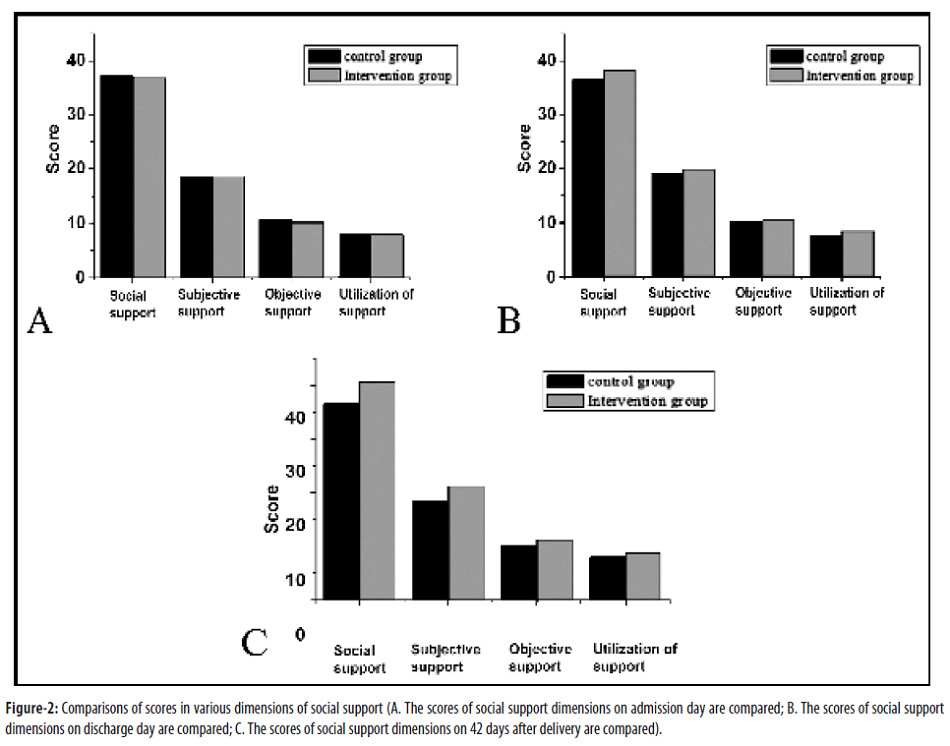 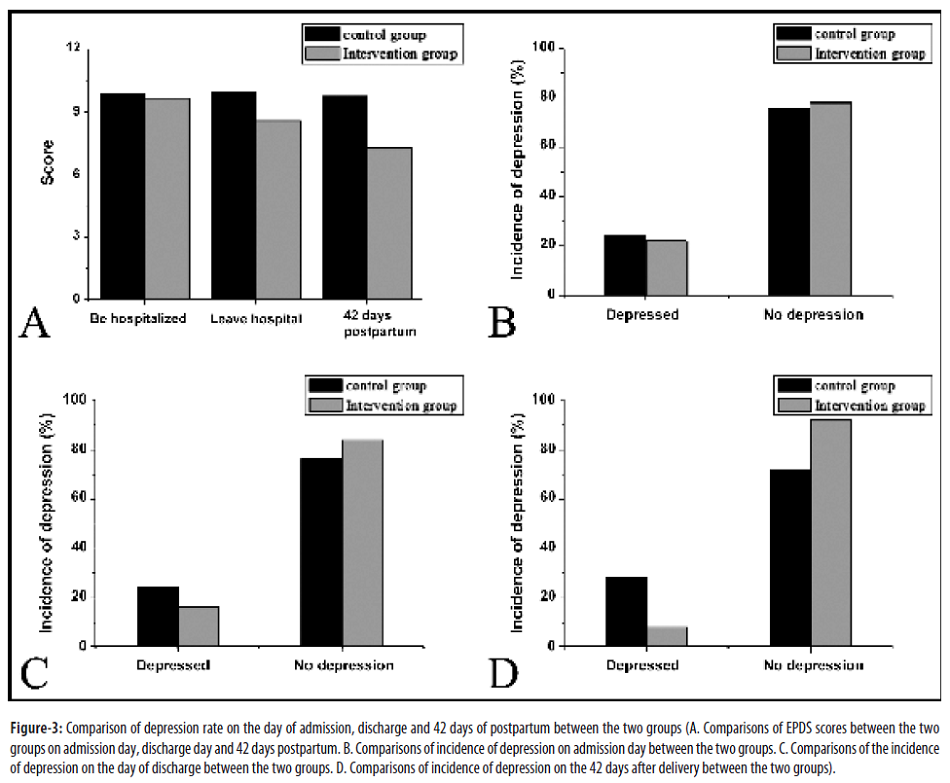 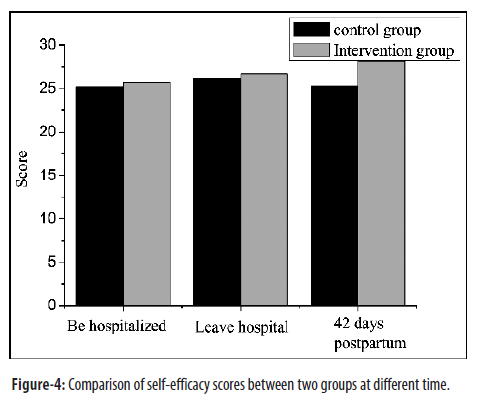 The role of postnatal care in the occurrence and development of depression cannot be ignored, and has received attention in recent years. Studies have found that nurses should tailor care to couples' preferences to help them identify and utilize preferred resources. Patients may be more receptive if mental health care is provided in obstetric care. Moreover, the role of nursing is mainly reflective listening, helping women adapt to the process of rebirth. An internal process of painful growth represented by motherhood, striving to protect the true self in order to maintain emotional health while negotiating development and transformation.

Conflict of Interest: We declare that all contributing authors of this paper have no conflict of interest and all have contributed equally to this research work.

Source of Funding: This work was supported by contributing authors from University through an internal research grant.