This case report describes dental management of a 15- year-old boy, undergoing treatment for Thalassaemia Major and Acute Myeloid Leukaemia with bone marrow transplant and immuno-suppressants. During the course of his treatment the patient developed a swelling in anterior maxilla and therefore was referred by the primary physician for evaluation. This case report highlights the management of medically compromised patients in a tertiary care hospital in which apexification was carried out in a permanent immature tooth utilizing MTA as an immediate apical plug.

Dento-alveolar trauma can lead to compromised function and aesthetics.1 Losing a tooth in any stage of life not just effects the masticatory and aesthetic efficiency but also has psychological impacts.1 Saving a traumatized tooth with incomplete root development is a unique challenge because root development stops if trauma results in necrosis of the tooth.2 It may lead to incomplete root end closure.3 Thus, making obturation problematic. In order to salvage such teeth a procedure known as apexification is carried out. Conventional apexification procedure included filling canal with Calcium hydroxide paste Ca(OH)2 and replacing it with new one at subsequent visits and this may take upto 24 months.4 Apart from lengthy treatment time, there is increased risk of fractures.4 Since 1979, researchers have been in a quest of a biocompatible material for creating artificial apical barrier. A recent method of apexification incorporates the use of a biocompatible material i.e Mineral Trioxide Aggregate (MTA) in the apical third of canal to achieve barrier against which obturation material can be condensed.5,6 This has overshadowed the conventional method because it offers the following advantages i.e. time saving, better patient compliance, better healing and less incidence of root fractures.5 MTA has been suggested by various studies for achieving orthograde apical stop.6

This is a case of 15-year-old boy, who visited Aga Khan University Hospital in September, 2018. He was undergoing treatment for Thalassaemia Major and Acute Myeloid Leukaemia with bone marrow transplant and immuno-suppressants. During the course of his treatment, he developed a swelling in anterior maxilla and therefore was referred by the primary physician for dental evaluation. The patient presented with severe pain since 2 days. Clinical examination revealed an Ellis class II fracture associated with tooth # 21 which was traumatized and had a diffuse swelling with a grade II mobility. Furthermore, a sinus tract was also noted near mucogingival junction. Radiographic examination revealed a radiolucency associated with immature tooth and an open apex (Figure-1). 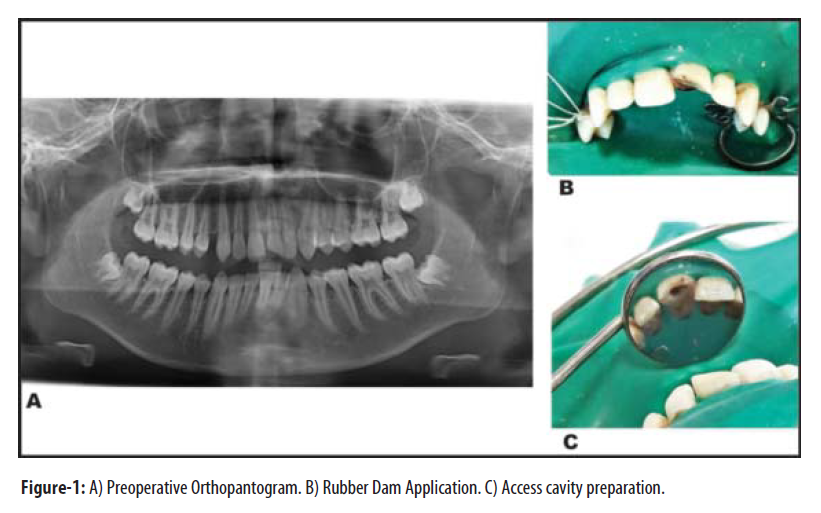 After thorough discussion and with the informed consent of patient, the option of immediate orthograde apical plug formation followed by root canal treatment was offered to the patient and treatment was started. Approval from head of the department was also obtained. Treatment was done under antibiotic cover. Rubber dam was applied after obtaining anaesthesia and access cavity was prepared in the tooth # 21 (Figure-1). Working length was determined with a #30 hedstorm file (Figure-2).

The canal was cleaned chemo-mechanically with # 80 Hedstorm file using 2% chlorhexidine Plus 2% (CHX) (Vista dental, Racine, USA) for copious irrigation. Canal was dried with sterile absorbent paper point prior to placing Ca(OH)2 paste (Calcipex II Techno-Dent, Bangkok, Thailand). Patient was re-called after a week. In the second appointment, the temporary restoration was removed under rubber dam isolation and local anaesthesia, and intracanal medicament was flushed out using CHX 2% together with gentle filing with a size of 80 K file. With the objective to create an apical barrier, canal was dried using paper point and MTA (Ortho MTA, Bio MTA, Seoul, Korea) was manipulated as per manufacturer's recommendation, carried to the apical 4mm of the canal using Micro-Apical Placement System (MAP) (Dentsply Maillefer) and then condensed with gauged endodontic pluggers (Figure-2). A radiograph was obtained to determine the optimum placement of MTA (Figure-2). A cotton pellet moistened with sterile water was placed in the pulp chamber and the access cavity was sealed with temporary filling material (MD temp Plus, Meta BioMed, Seoul, Korea). After a week, the temporary filling material and the cotton pellet were removed. Verification of the integrity of apical barrier was executed using a size 20K file. The root canal was irrigated using passive ultrasonic irrigation technique prior to final obturation. Canal was dried as per previously explained protocol and obturation was done with backfilling of thermoplastic gutta-percha (Calamus system, Maillefer, Switzerland) combined with a root-canal sealer (Sealapex, Kerr, Sybron Dental Specialties, California, USA). Flowable composite (Filtek, 3mESPE, St Paul, USA) was used for access cavity filling (Figure-3). 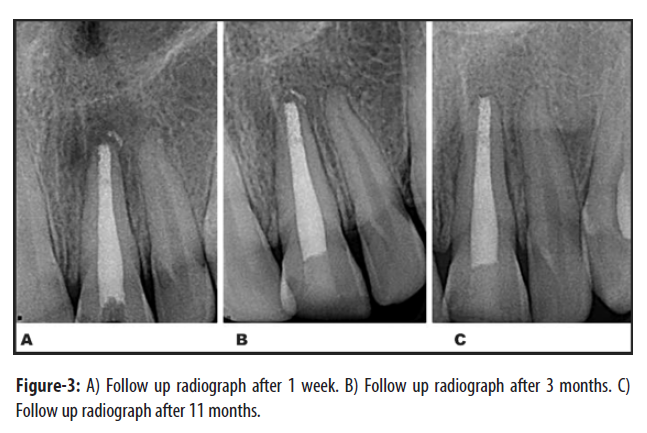 There were no clinical symptoms, mobility or periapical radiolucency on subsequent follow up visits i.e: 1 month, 3 months and 11 months follow up radiographs (Figure-3). Function was restored to normal.

The use of Ca(OH)2 apexification treatment has a 90% success rate, however it has shortcomings.7 The alkaline nature of Ca(OH)2 deteriorate the organic constituents of dentinal tissue, compromising the resistance to fracture. MTA has proved to be a good alternative due to its strengthening effects on the roots.8,9 In our case, the choice of orthograde apical plug with MTA was opted not just due to its beneficial effects in teeth with immature apex but also due to patient's medical and psychological status. Patient was reluctant to come to hospital multiple times for the treatment. Therefore, the option of conventional apexification would not have been practical for him due to lengthy treatment time. Antibiotic prior to treatment was prescribed as per physician's advice. Patient's blood reports revealed mild drop in neutropil count at that time. According to Infectious disease of society of America, patient should only be prescribed with antibiotics if any invasive treatment is being carried out in less than 9 months of bone marrow transplantation or if patient's neutrophil counts are less than 100mm3,11. The rationale of using intracanal medicament in this case for one week prior to final obturation was to limit bacterial count.12 There are various combinations of bacteria present in root canal system of necrotic teeth.13 It is important to use intracanal medicament for a period of 7-10 days to eradicate bacteria from inaccessible areas of root canal system. Studies have proved efficacy of Ca(OH)2 alone has less antibacterial effect against Enterococcus faecalis. Ca(OH)2 with concomitant use of CHX has showed significant decrease in bacterial counts.12,14 Thus, CHX 2% was also used as a final irrigant in every appointment. Sodium hypochlorite was deliberately not used in this case to avoid extrusion of irrigant beyond apex which could result in hypochlorite accident. A study by Nesser et al. has proved that apical diameter of >2.5 mm is not safe and can result in extrusion of irrigant beyond apex.15 Micro Apical placement system (MAPS) was used in this case for the delivery of MTA upto the root apex. It facilitates unhindered access to the apical area and helps in apical placement of material with a plastic tool avoiding the scattering of the root canal filling material in the surrounding bone. Orthograde creation of apical barrier is a technique sensitive task as placement of material has to be confirmed by radiograph. Condensation forces have to be gentle due lack of resistance of open apex and inability to directly visualize the field in comparison to retrograde apical surgery.16 This could lead to extrusion of MTA beyond apex, as in our case. Studies have proved that MTA beyond the apex did not affect the healing rates.17,18 Study by Simon et al. has concluded that MTA is highly biocompatible and has an acceptable setting time.19 An ideal root canal treatment demands for a good coronal and apical seal for long term successful outcomes.20 In a tooth with wide canal it is important to do a well condensed three dimensional root canal obturation.21 Obturation was carried out using warm vertical thermoplastic technique in this case to achieve densely filled root canal. In this case the thickness of apical plug was 4mm to provide an optimum seal against bacterial leakge.22 Leimburg et al. stated that thickness of the material has no effect on bacterial penetration but on displacement resistance.22,23 Hence, material should be 3-5mm thick. Thickness of 3mm is appropriate for teeth with short root canals to accommodate filling of middle and coronal third of root with root filling material.23 Patient was followed for 1 month, 3 months and 11 months. Healing outcome was assessed as per Periapical index criteria. This criteria is used by various researchers to assess periapical healing status in many studies and cases of apical periodontitis.24

The desirable healing outcome in this case encourages the use of MTA for creating apical barrier. Teeth with necrotic pulp and immature apices can be salvaged nonsurgically with orthograde approach. New advancements in calcium active silicate cements has opened new horizons for saving dentition with least intervention possible. In patients who are medically compromised, a treatment alternative with less number of appointments yet predictable outcomes is appropriate. Therefore, we recommend that the use of MTA with orthograde approach in cases of immature apex with necrotic pulp. It is valuable treatment technique which allows conventional apexification method thus, reducing treatment time with good healing outcomes.

Disclosure: We have no financial interest, arrangement or affiliation that would constitute a conflict of interest.

20. Sritharan A. Discuss that the coronal seal is more important than the apical seal for endodontic success. Aust Endod J 2002;28:112-5.