Chest trauma, penetrating or blunt is common in this era of motor vehicle accidents, violence and terrorism in South Asia. Islamabad is the capital of Pakistan but there is no dedicated chest surgery unit in any government sector hospitals. Gunshot chest, is therefore managed by general surgery team in our tertiary care setting i.e. Federal Government Polyclinic Hospital and Post Graduate Medical Institute, Islamabad. We report a case of gunshot chest with lung contusion and open pneumothorax with a chest wall defect of 10 x 15 cm. in March 2015, this young man presented in emergency department of Federal Government Polyclinic Hospital (FGPC), Post Graduate Medical Institute (PGMI) Islamabad in shock after self-inflicted point blank suicidal gunshot to his left anterolateral chest. After primary resuscitation, the patient was shifted to OR, and a left anterolateral thoracotomy performed. Lung contusion was repaired and chest drain placed. The challenging task of closing the huge chest wall defect was performed by rotating the left latissimus dorsi muscle flap. The patient was shifted to ICU and remained stable postoperatively.

Globally, Thoracic trauma is a challenging health task. Thoracic trauma makes around 10 to 15 % of all trauma. Chest trauma itself is the cause of death in 25% of trauma patient and in another 25% it's a contributing factor in mortality due to associated complex injuries. Pakistan is a third world country faced with terrorism, violence and road traffic accidents. Chest trauma is common in the above settings. Islamabad is the capital of the country without a dedicated thoracic surgical unit in any government sector hospital. At Federal Government Polyclinic Hospital (FGPC), Post Graduate Medical Institute (PGMI) Islamabad, the premier institute of the capital, chest trauma is managed by general surgical team. Majority i.e. over 80% of the chest trauma is managed without the need to open the chest i.e. with a chest tube, IV fluids, blood transfusion, oxygen therapy and aggressive physiotherapy.1 Latissimus dorsi muscle is the workhorse in this region and has been used to reconstruct arms, chest and shoulder area tissue loss.2 Limited or extended latissimus dorsi flaps are used depending upon the need. Chest wall tissue loss due to infection, trauma or oncological surgery may be reconstructed with latissimus dorsi muscle and combination of thoracoplastic technique, composite titanium, polypropylene, Gore-tex, collagen and syntheticbioengineered rib grafts. Latissimus dorsi flap was introduced in 1970 s, it has always been useful, after the development of transverses abdominis flap for chest wall and breast reconstruction.3 We present a case report of chest wall reconstruction with latissimus dorsi muscular flap in a patient with a gunshot wound.

This 21 year old man presented to the ER of the PGMI, Islamabad in March 2015 with self-inflicted/suicidal gunshot (pistol) to his left anterior chest wall. 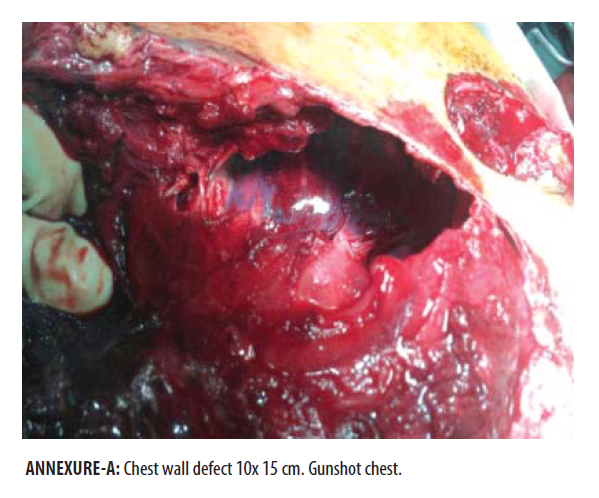 The entrywound was 3 x 3 cm at left 4th intercostal space mid clavicular line and the exit wound was 10 x 15 cm in the lateral chest wall on the same side. It was a point blank close range gunshot with extensive tissue loss in the lateral chest wall. There was loss of body of 5th and 6th rib with underlying lung laceration and extensive haemorrhage. 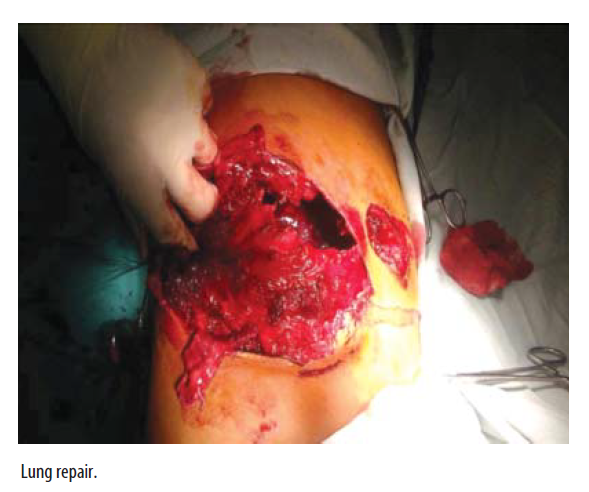 The patient was resuscitated in emergency department with iv fluids, oxygen inhailation and occlusive dressing for the open pneumothorax and shifted to OR for emergency thoracotomy. At presentation, patient was in shock, pulse 130 per min, BP 80/50, respiratory rate of 32 per min. Patient was anaesthetized in the OR and CVP was passed. Left Antero lateral 5th rib thoracotomy was performed. The damage was assessed and lung parenchymal repair with hemostasis was performed. Dead charred tissue with free floating rib pieces was removed from the contused lung. The pericardium, diaphragm and mediastinum was intact. 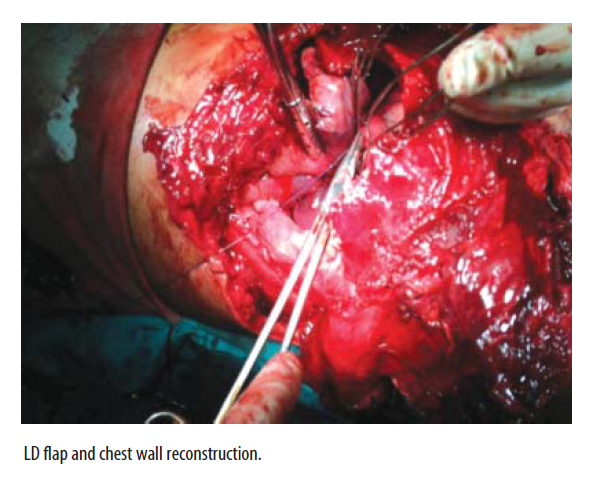 A challenging task was the closure of lateral chest wall defect of 10 x 15cm as the body of 5th and 6th rib were lost and primary approximation of chest wall defect was impossible. A mess of interrupted proline sutures was used to bring the ribs closer to decrease the size of the defect. The complete LD muscle flap can measure up to 20×35 cm. The skin paddle can be as large as 12×20 cm. We didn't require that much tissue in our case as the defect was 10x15 cm. moreover, skin wasn't needed as skin flaps were easily mobilized by subcutaneous dissection. So we dissected the LD muscle and raised the muscle flap. As the tissue loss was substantive, a rotation muscular flap of latissimus dorsi was taken from the ipsilateral side. The flap was rotated anteromedially to cover the defect and placed there with vicryl 2/0. 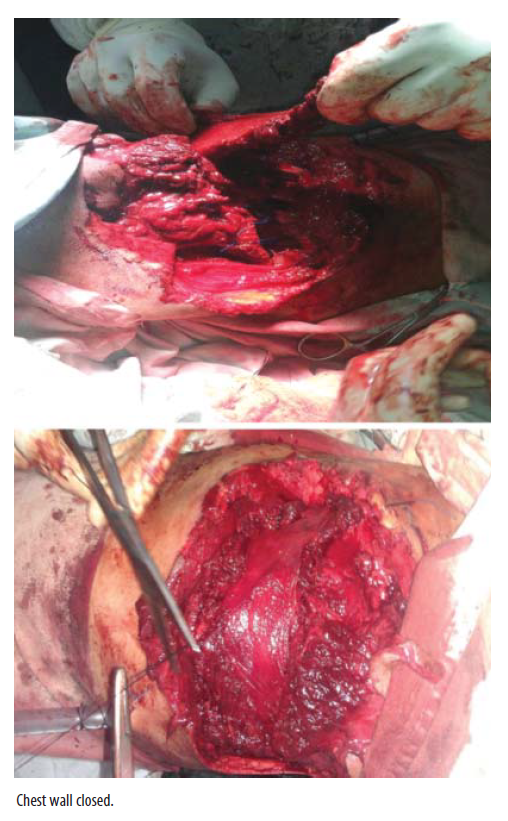 A chest drain was inserted on the same side in 8th inter costal space mid axillary line. The skin flaps were raised on both side of the chest wound and skin closure was done primarily. The patient remained stable haemodynamically as adequate resuscitation was performed intra operatively. Post operatively the patient was shifted to surgical ICU and remained stable. We removed the drain on the 5th postoperative day and sent him home on 7th post-operative day. Mild wound seroma was managed with dressing. Stitches were removed on 10 post-operative day.

Historically Tansini, was the first surgeon who used muscle flap for chest wall reconstruction i.e. a latissimus dorsi flap for a radical mastectomy defect in 1906.4 Some LD cases have been described in the 1940s and 1950s; however, this technique was revived in the 1970s and is now routinely practiced.2 Principles of ATLS, govern the management of chest trauma patients. Airway, breathing and circulation is secured. Closed chest injuries are managed by chest drains. In cases of open pneumothorax with chest wall defect, chest drain does not help or restore the pulmonary dynamics. The patient needs to be shifted to the OR for control of haemorrhage, lung parynchymal repair and chest wall reconstruction.5 Different methods have been used effectively to reconstruct chest wall. The reconstructive spectrum includes skin grafting, prosthetic implants, micro vascular free tissue transfer, bone reconstruction, and vacuum assisted closure. Flaps of Pectoralis major, latissimus dorsi, and rectus abdominis have been used for chest wall defects reconstruction.2 We performed LD FLAP in our repair of chest wall defect. Olivari6 advocated it for coverage of radiation-induced wounds of the chest wall. To obliterate dead space with a muscle-only flap, LD FLAP is now commonly used for coverage of both extrathoracic defects and intrathoracic defects. Gunshot chest patients with huge defect, receive high velocity close range or high caliber shots. These patients are haemodinamically very unstable due to excessive blood loss and extensive visceral injury. They rarely reach an institution where expert thoracic surgical/ chest wall reconstruction expertise is available. We presented this unique case of emergency chest wall reconstruction in a gunshot patient, after suicidal selfinflicted gunshot to the chest. This patient was in shock too with lung contusion and massive haemorrhage. The sucking open chest wound lead to grossly disturbed respiratory mechanics. Such patients usually die on the way or in ER/ OR due to haemodynamic instability. In this particular case, adequate resuscitation and prompt thoracotomy saved the patient's life. This case report is important, as we already mentioned, thoracic trauma alone is the cause of death in 25% of patients and in another 25%, it's a contributing factor in a poly trauma death. This amounts to a very high mortality. Our patient received a close range self-inflicted point blank shot, with major laceration of left lung. Our patient had full recovery from this life threatening situation. Plastic surgery or reconstructive surgery strictly follows a ladder. It emphasises on simple procedures first. If simple closure, relaxing incisions, skin flap closure is not possible, then local rotation flaps are the mainstay for reconstruction. Skin pedicle design was introduced to allow large flaps to be raised without requiring free grafts. This V-Y pattern helps to cover large anterior chest defects after mastectomy.7 Ersoz E and colleagues used a titanium mesh to reconstruct the chest wall in chondrosarcoma of the chest wall8 while Yoshiya K and colleagues used Malex mesh in their series of 16 cases between 1994 and 2012.8,9 The debate continues, whether to use myocutaneous flaps alone or in combination of prothetic implants and mesh. Makboul M and colleages have proven that myocutaneous flaps alone can be safely and effectively used to cover chest defects in radionecrosis. In our case, we used the muscle only to cover the defect. However, larger defects, with loss of more than 4 ribs require some thoracoplastic technique where synthetic material may also be used in combination with flaps.10 Our patient presented in emergency with a gunshot wound. Most of the case reposts and studies reporting chest wall reconstruction are elective procedures. Between January 2006 and December 2010, Guo L and colleagues presented their series of 14 cases of these 12 cases were due to giant chest wall tumour resection. One case was of thermocompression injury and one case was due to radiation necrosis.11 Plenty of variations exists in chest reconstruction throughout the world. Schmidt J and colleagues used A cellular Porcine Dermal Collagen Matrix mesh to reconstruct chest wall12 while in a large study of 45 patients, Basta MN and colleagues presented their novel thoracoplastic approach. They incorporated mesh in their repairs with latissimus dorsi and pectoralis major flaps.13 Tissue engineering has also been used to perform chest wall reconstruction. Xie HQ and Colleagues have given their account of chest wall reconstruction in 16 cases between 1994 and 2012, using tissue engineered ribs.14 Synthetic material like Gore-Tex mesh is also popular among surgeons. Benzo L and colleagues, used Gore- Tex mesh in a patient with chest wall defect after resection of a low grade chondrosarcoma.15 Penetrating chest trauma has a mortality rate of around 10% due to damage to lungs, heart, trachea and major vesselsx:16 Massive chest wall defects are really challenging. They pose immediate threat to life in cases of penetrating trauma. The respiratory dynamics are disturbed and the underlying lung contusion/ shock leads to severe oxygen mismatch. This leads to hypoperfusion of vital organs with risk of mortality and morbidity.17 Managing such patients is a life time event for a General surgeon. Though classically trained in abdominal surgeries and emergencies with little exposure to thoracic surgical training, the general surgical team can perform well in do or die situations, applying the knowledge n basic surgical skills. Qualified and trained thoracic surgeons are very few in number in this country of 200 million population. Thoracic surgical exposure and training for a general surgeon is mandatory till the development of specialist thoracic surgery units in big cities.

Conflict of Interests: None.

Funding Source: No funding received from any organization/ society/ hospital.

Patient Consent: Consent for publication was taken from patient.