Inferior vena caval (IVC) injuries are uncommon and challenging. The objective of the study is to evaluate outcomes of patients operated for inferior vena caval injuries at a university hospital. This is a retrospective case series of all adult patients aged >18 years who had been operated for traumatic IVC injuries at a university hospital between Jan 1998 to December 2018. During the study period, 9 patients with IVC injuries were operated with mean age of 26±10.3 years and all were males. Five (55.5%) patients had penetrating injuries while 4 (44.4%) had blunt trauma. Four (44.4%) patients had infra-renal while 5(66.7%) had suprarenal segment injuries with 4 (44.4%) patients undergoing primary repair of the injury. The most injured associated organ was liver 5 (55.6%). Thirty-days operative mortality was 66.7%.

Traumatic inferior vena caval (IVC) injuries are difficult to deal with. Most of the patients die at the scene and are not able to reach the hospital. Half of those arriving in time, die within the next 24 hours as the sequel of massive bleeding and multi organ failure.1 Mortality rate for patients operated for IVC injuries have been reported as 33-59%.1-4 Uncontrollable haemorrhage, associated abdominal injuries and the ''triad of death'' are considered responsible for mortality. There is little reported data on this topic in loco-regional literature. The objective of the study is to evaluate factors predictive of mortality in patients operated for inferior vena caval injuries at a University hospital.

This was a retrospective case review of all adult patients aged >18 years who had been operated for IVC injuries between Jan 1998 to December 2018. Patients with IVC injuries brought alive to the operative room table were included. Outcome measures were pattern of Injury (penetrating vs. blunt), operative strategies (ligation versus repair), intra-operative and 30-day operative mortality. After obtaining approval from the institutional ethical review committee, data related to demographics, mechanism of injury, associated injuries, surgical management, duration of hospital stay, complications and mortality were extracted from patients records on a well-designed performa. Data analysis was done on SPSS version 22. Continuous variables were expressed as mean ± standard deviation (SD). Categorical variables were expressed in frequency (%). During the study period, 9 patients with IVC injuries were brought to operating room table alive and were operated. All patients were male with a mean age of 26 ±10.3 years. Median (IQR) time from injury to the presentation was 50(240) minutes. Five (55.5%) patients had penetrating while 4 (44.4 %) patients had blunt trauma. At presentation mean Glasgow coma scale (GCS) was 8.8±6.03, mean injury severity score was 39.8±15.4, mean systolic blood pressure was 94.4 ±24.1mm Hg and mean revised trauma score was 7.4±3.9. Four (44.4%) patients had infra-renal injuries while 5 (55.5%) had suprarenal IVC injuries. The associated most injured organ was the liver in 5(55.6%) cases. Two (22.2%) patients had combined kidney and ascending colon injuries. Three (33.3%) patients collapsed before bleeding could be controlled, while 4 (44.4%) had primary repair of the venous injury. Out of total, 6 (66.7%) patients expired in which five patients died in the operating room due to uncontrolled bleeding. Two (22.2%) patients experienced complications; one had deep venous thrombosis while the other had gangrenous bowel which required resection. Details of the patients are given in Table-1 and 2. 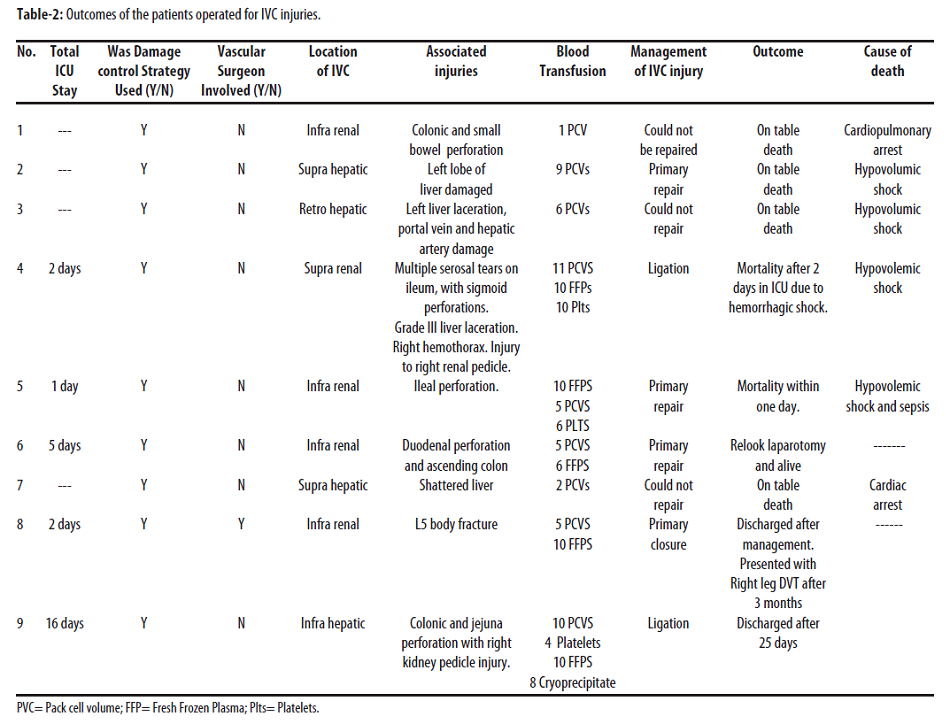 This is a case series of traumatic inferior vena caval injuries managed by the general and trauma surgeons from a developing country. A high mortality rate was observed. Less than 5% of the patients with penetrating abdominal injuries are IVC related and less than 0.5 % of blunt abdominal trauma patients have these injuries.5 IVC is anatomically divided into infra-renal, juxta-renal, retrohepatic and supra-hepatic segments. It is important to identify the site of injury as surgical exposure for each segment is different. Patient can present with active bleeding or contained retroperitoneal haematoma. Presence of free blood in the peritoneal cavity is a poor prognostic factor. It is technically difficult to deal with diffuse venous bleeding compared to arterial bleed where arterial spurter helps to locate the origin. The first step in case of active bleeding in the peritoneal cavity is to control it by direct compression. Applying compression by a sponge-stick proximally and distally is an important part of stoppimg haemorrhage. Even with adequate compression, haemorrhage can be significant, the source of which can be the renal and lumbar veins. The proximal control can be achieved by compressing both iliac veins lateral to L5 vertebra. Manual compression of the aorta at the aortic hiatus can help in locating the site of bleeding. This can be achieved by exposing the supracoeliac aorta after dividing the gastrohepatic ligament. The present study is on patients operated for IVC injuries at a university hospital from a developing country. This showed that most of the patients with penetrating trauma had suprarenal IVC injuries. All patients were explored through midline incision. For control of active bleeding, initial manual pressure and packing were done. The surgical exposure was individualized upon the site of injury. The haemodynamic status, associated injuries and the extent of injury dictated the operative strategy as repair or ligation. Most of the patients presented with, higher mean injury severity score and lower mean GCS and mean systolic blood pressure. The 30-day operative mortality was 66.3 % and was comparable to other series.6-8 Rosengart et al6 described predictors of outcome as anatomical location of injury, initial severity of shock, and number of associated injuries. They reported mortality rate of 100% for suprahepatic, 78% for retrohepatic, and 33% for infra-renal injuries. Bowley DMG et al. showed that massive bleeding leading to haemodynamic shock as a predictive factor of death.7 Cudworth et al. described GCS as an independent predictor of mortality in IVC trauma.8 Practically IVC injuries can be primarily repaired,9 if simple and in a stable patient. Ligation of significantly injured IVC is an acceptable practice as a damage control surgery which was performed in 5 of our patients. It is usually well tolerated. In a review of 100 IVC injuries patients, ligation was performed in 25 cases with good results and without the trace of lower extremity oedema. The limitations of the study are small sample size and its retrospective design. Despite these, it identified the patterns and outcomes of patients with IVC injuries presenting to a trauma centre of low-to-middle income country. It also showed over two decade, there were very few patients who had been brought alive to the hospital and in a serious condition. Probably, rapid identification and transportation to dedicated centres can improve the outcomes of these patients.

IVC injuries are uncommon and associated with high mortality rate.

Delay between onset of indication and definitive surgery for tracheal trauma