The spectrum of injuries from motorcycle induced road traffic accidents from level one trauma center: A prospective observational study

Objective: To observe the role of motorcycles in causing Road Traffic Accidents and assess the demographics of the drivers, the injury patterns and their outcomes.

Methods: This prospective observational study was conducted at the Surgical Unit 1, Lahore General Hospital, Lahore for a period of 6 months from November 2017 to May 2018. All patients presenting in ER with RTA secondary to motorcycle trauma were included in the study. Data of patients including demographic and medical data, helmet use, spectrum of injuries, specific injury diagnosis, and final disposition of patients was analyzed. The distribution and associations of both victim- and crash-related variables such as crash mechanism, types of involved vehicles, types of injuries, and demographic characteristics were investigated. Data were analyzed by SPSS v23.

Conclusions: Motorcycle traffic morbidities and mortalities remain to be a major public health issue in Lahore as well as all over Pakistan. There is an urgent need for an efficacious interventional programs to decline the burden of motorcycle related morbidity and mortalities.

With the innovation of motor operated vehicles, the standard of civilization and living has ascended to an incalculable level. In present times, use of automotive vehicles are considered as a necessity. Contrarily, they can be a source of trauma and destruction to the property, which has enhanced the burden worldwide. Among motor vehicles, motorcycles are the most frequently used mode of transportation in Pakistan as it is the most economical conveyance.1 In spite of the rising numbers of motorbike trauma, motorcycles production in Pakistan is rising to a noteworthy level with almost manufacture of 2.3 million motorbikes within the initial ten months of 2017. Around 7,408 new motorbikes get on to the roads every day in the country.2 Worldwide, 49% of mortality is caused by road side accidents involving vulnerable road users which includes pedestrians, bicyclists, and motorcyclists. Almost, one fourth of those who get killed in road accidents are motorcyclists.3 In 2013, road traffic accidents were the prime cause of death amidst the populace of 15-30 years of age, executing approximately 1.25 million persons worldwide. While there has been an overall inclination towards stabilization of deaths from road side accidents, significant disparity between developed and under developed countries prevail. From a vocational perspective, automobile accidents are a standout amongst the most of work related causes and pose extreme risk of mortality and morbidity, especially for individuals with occupations associated with driving or transportation. From the viewpoint of financial costs, the burden of automobile accidents is critical, evaluated at 2% of the GDP in USA, and at 1.5% - 3.9% in territory of Latin America.4 Motorbikes intimidate their drivers with considerable risk in terms of road safety. Their structure is weak with little security for riders against crashes and difficult for other road users to protect them. In addition, it is particularly testing to determine the speed of approaching motorbikes considering their small width and a single head light. In a journey of a mile, riders of motorbikes are about 5 times more at risk to encounter and get injured in a road crash than a person travelling in a car. They have a 29 times higher risk to be killed.5 Motorbike helmets have averted almost 40 percent of lethal injuries and 13 percent of non-fatal severe injuries. However, as much as 1/3rd of bikers still do not wear helmets. Impact of motorbike helmet legislation on the utilization of helmet, patient wounds, and consequences has been witnessed. Although few to no information are accessible assessing the impacts of motorbike helmet laws on maxillofacial and cranial trauma. Complex traumas to face are frequent among motorcycle accident patients and more than double likely to be encountered by patients not wearing helmets. In spite of the fact that majority of facial traumas are not immediately perilous, individuals presenting with complicated face trauma suffer from poor health and intense trauma-related disability averting employment.6 Motorcycle helmet laws are efficacious as they promote a large number of bike riders' compliance in using a helmet. Universal legislations are promptly enforceable by cops on the grounds that resistance is promptly recognizable. In United States with universal helmet laws, approximately 12% of severely injured riders were without helmets in comparison with around 64% of partial law abiders following helmet laws and 79% when there was no helmet law. America has ratified universal laws after no legislation or a limited regulation, which has lead to an increased use of helmets from 15-60% to 80- 99% in riders. In general, when comparison was done in states without a helmet law and with those states following a universal law around 22-33% decline was seen in mortality of motorcycle trauma victims and the states following partial laws have around 7-10% reduction. Interestingly, in states that have removed or debilitated helmet laws have encountered critical abatements in helmet use among bike riders and comparing increments in fatalities and head trauma hospitalizations.7 Studies demonstrated that motorcycle related trauma cost the public health care system as much as 6 times more than other automobile injuries, per vehicle. Communicated in different terms, Ontario's Ministry of Health and Long-Term Care would hope to spare $13.5 million every year if impact rates stayed unaltered and the province's registered motorbikes were supplanted with cars. Although this approximation is plausibly conservative for multiple reasons.8

This prospective study was done in Surgical Unit 1, Lahore General Hospital, Lahore for a period of 6 months from November 2017 to May 2018. Surgical emergency of this hospital receives patients of trauma 24 hours a day. Inclusion criteria were patients presenting with Road Traffic accidents of any age and gender. Exclusion criteria were patients with trauma other than a road side crash for example with history of fall or fight. Consent was taken verbally from for the data collection and publication from every patient or their attendants. On admission, information regarding demographic characteristics such as age, gender, duration between trauma and admission and mechanism of injury (car, motorcycle, fall, assault, pedestrian, injury by object, others) is routinely recorded by admission unit employees. The driver, passenger or pedestrian, who was hospitalized after a road traffic accident, was enrolled in the study. Experienced staff collected the needed information after treatment of the patient. Variables such as demographics, helmet use, blood pressure, time of accident, type of accidents, speed of motor when the accident occurred and region of injury in the body. For the study, statistical analysis was done at SPSS v23 software for windows. 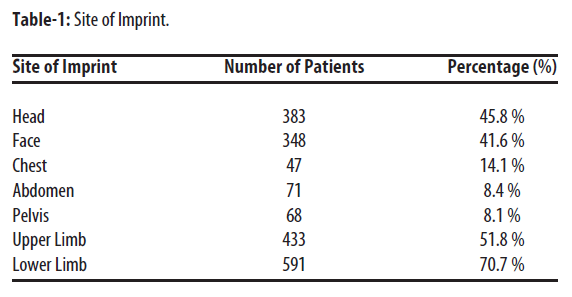 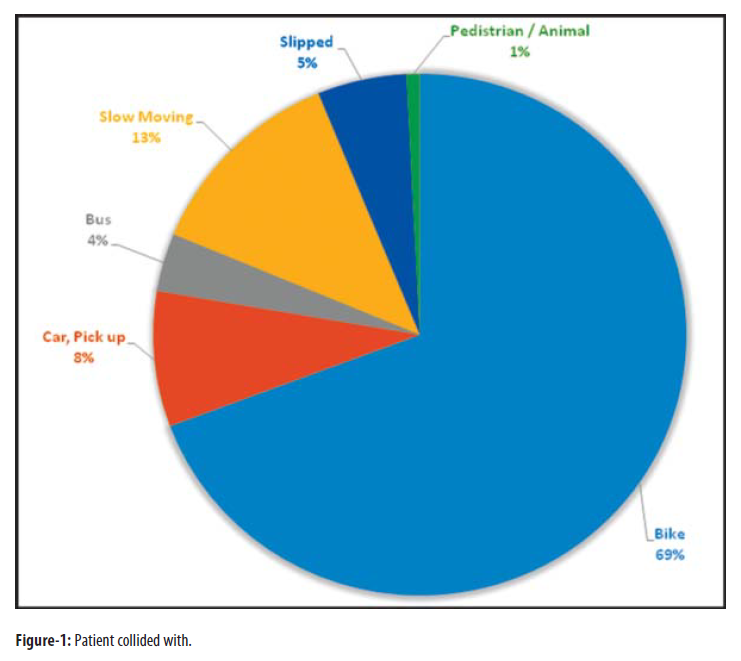 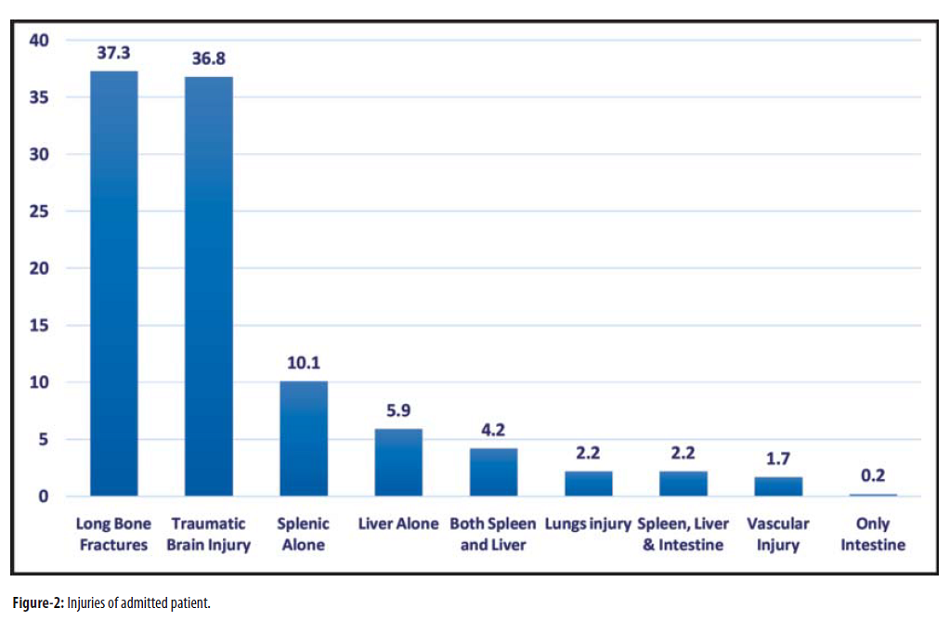 Grade of injuries at various regions of body are shown in Table-3.

Pakistan is one of the territories with relatively high rate of road side accidents and associated mortality as well as morbidity. With the frequent use of motorbikes in Pakistan, motorcycle associated traumas are becoming more common. As indicated by the first road side trauma surveillance report in 2011,9 the incidence of road side accidents involved 184.3/100,000 people, and mortality rate was 5.7/100,000 population.9 This features the vital necessity to embrace compelling local protocols in the desire for diminishing motorcycle injuries. Our information recommended a higher rate of head trauma, maxillofacial wounds, and fractures of long bones than those recorded in the previous epidemiological studies.1 Besides, cranial and maxillofacial trauma rates were higher than those found in Western countries bike accidents line up with the analysis by Monk et al., who announced that automobile accidents in affected people in their second decade of life brought about higher casualty rates than those in different decades.1 In a study conducted in Singapore on 62 motorbike riders, no compelling disparity was noted among the patients with regard to injury severity score (ISS) as well as injury distribution.10 Thus, the present study was conducted, and our findings advocate the idea that almost similar treatment was given to drivers and passengers, particularly considering the strong grounded understanding from extremity trauma.10 Our study features the epidemiology of head injuries and usage of helmet among motorbike accident injury patients. Similar to a study conducted in Kenya,11 our study showed low prevalence of helmet use and a significant frequency of head trauma. Out of 835, only 168 (20.1%) drivers were wearing helmets while 667 (79.8%) were not wearing any head protective device. A study done in Kenya showed 94 (28%) helmet users and 247(72%) were not wearing helmets at the time of the accident. Provided a fast rise in bikes on Kenyan streets, there is a dire requirement for continued endeavours at diminishing the danger of head injuries and their outcomes among motorbike riders. Official information by the Kenya National Bureau of Statistics demonstrates new bike registries for ten month (January 2016 – October 2016) period rose to 159,260 units in contrast to 85,073 motor bikes registered during a similar period in 2015.11 Both studies represented that majority of motor bike accident injured patients were of the age somewhere in the range of 20 and 29 years, which is also in accordance with the results of our study.11 In a study conducted on Road Traffic Accidents in a tertiary care hospital in Sirilanka demonstrated that 32.1% were drivers, 43.9% passengers and 19.7% were pedestrian while in 4.3% it was unknown. As well as 36.6% patients were travelling on motorcycles, 28.2% were on 3 wheels vehicles, 12.9% were travelling via van, jeeps and pickups while 22.3% were travelling on buses, cars and other slow moving objects. While in our study 72.9% were drivers, 22.3% were passengers and 4.8% were passengers. Moreover 69% patients were travelling via motorcycle 8% via cars and 4% on busses while 19% were travelling on slow moving or other mode of transportation.12

Motorcycles although a cheap mode of transport, are a major cause of road traffic accidents. The morbidity associated with these accidents however can be greatly reduced by effective use of protective gadgets including helmet, knee and elbow caps to be used by both drivers and passengers.

Limitations: This was a short duration study and only looked at 835 patients. As such the results of the study cannot be generalized to the whole population and recommendations cannot be made.

Funding Source: All funding was provided by the hospital.

Non-operative treatment of hepatic trauma: A changing paradigm. A Six year review of liver trauma patient in a single institute