Doxorubicin is a chemotherapeutic drug used in combination with other anti-cancer drugs for the treatment of sarcomas and carcinomas as well as acute lymphocytic leukaemia. Doxorubicin induced cardio toxicity (DIC) is acumulative dose-dependent progressive myocardial damage which leads to heart failure.1 Doxorubicin leads to apoptosis, necrosis and autophagy through formation of free radicals. The heart is more vulnerable to the effect of free radicals due to high density of mitochondria which is the main site for the creation of free radical. 2 During DIC, mitochondrial calcium-loading capacity is lost which results in the induction of mitochondrial permeability transition pore (MPTP), which increases the inner mitochondrial membrane permeability. 3 Additionally, doxorubicin inhibits endothelial nitric oxide synthase (eNOS), result in reduction of nitric oxide (NO) production. This interaction is dose-dependent and high dose of doxorubicin deviate eNOS for the generation of superoxide instead of NO. Genetically absence of eNOS transcription protects against the DIC. 4 Indeed, in DIC there is over-expression of both β-adrenergic receptors and pro-apoptotic pathway leading to heart failure. 5 As well, doxorubicin may causes important dys-regulation of cardiomyocyte calcium content by direct or indirect effect through the induction of reactive oxygen species (ROS). Dys-regulation of cardiomyocyte calcium occurs through inhibition of sarcoplasmic reticulum calcium pump, sarcolemma of  sodium/potassium pump and ryanodine receptor. 6 The clinical presentation of DIC including; acute cardiotoxicity, early onset-cardiotoxicity and late onsetcardiotoxicity. 7 Therefore, uses of natural or synthetic anti-oxidants may protect against DIC through modulation of oxidative stress and preservation of endogenous antioxidant capacity. 8Ginkgo Biloba (GB) is a herbal agent belonging to the Ginkoaceae family. The main constituents of GB extracts are flavonoids, terpenoids and various organic acids. Flavonoids are responsible for the major anti-oxidant effect of GB, which reduced the level of free radicals and prevent lipid peroxidation. 9 Therefore, the aim of the present study was to evaluate the cardio-protective effect of Ginkgo Biloba (GB) on doxorubicin induced-cardiotoxicity in rats.

For tissue sample collection, the heart was separated from the decapitated animals, and stored in normal saline solution. The isolated hearts were fixed in 10% formalin buffer to preserve the tissue structure according to the paraffin methods. 12 The staining of the tissue sections was done by using haematoxylin and eosin (H&E) stains.

Data analysis was done using SPSS 20, and it was presented as mean} standard deviation (SD). The variables were tested using unpaired student t-test to compare treated groups with control. The levels of significance was set at p<0.05. 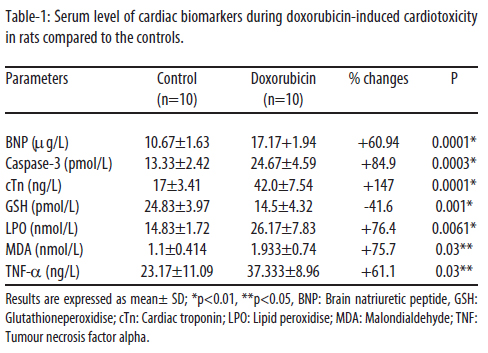 Co-administration of GB with doxorubicin led to significant reduction in cTnI, Cas-3 sera levels with elevation in GSH serum level significantly (p<0.05). The effect of GB on BNP, LPO, MDA and TNF-α was insignificant (p>0.05) compared with the doxorubicin (Table-2). 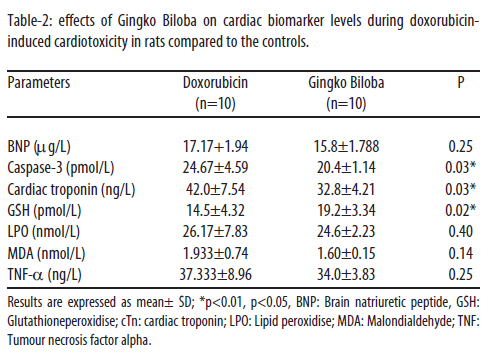 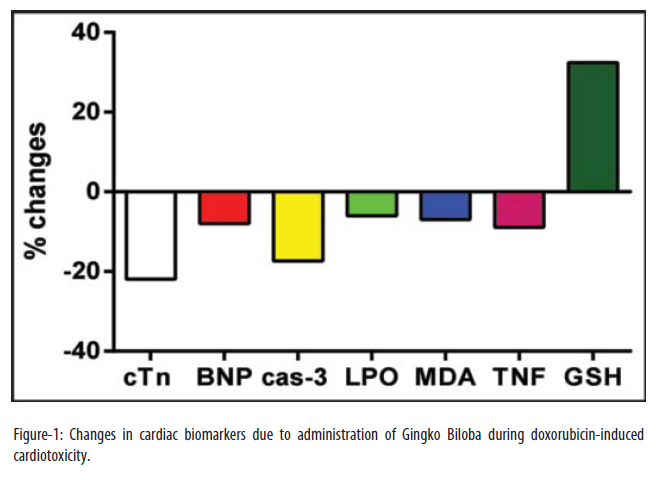 Ginkgo Biloba was found to have a significant cardioprotective effect through attenuation of oxidative stress during doxorubicin-induced cardiotoxicity in rats.

Acknowledgment: We are grateful to Prof. Dr. Sadiq M. Al-Hamash for his great support.
Disclaimer: None.
Conflicts of Interest: None.
Source of Funding: None.

10. National Research Council. Guide for the Care and Use of Laboratory Animals: Eighth Edition. Washington, DC: The National Academies Press, 2011.

Berberine and Pentoxifylline: A novel combination in amelioration of acute kidney injury