Objective: To compare the post-operative outcomes of open inguinal versus laparoscopic varicocelectomy.
Methods: The comparative prospective study was conducted from January 2016 to January 2018 at the Al-Yarmouk Teaching Hospital and a private hospital in Baghdad, Iraq, and comprised patients diagnosed with varicocele. Group A patients underwent laparoscopic varicocelectomy and Group B patients were treated with open inguinal varicocelectomy. All patients were followed up for a minimum of six months and parameters compared included operative time, post-operative need for analgesia, hospital stay, post-operative changes in seminal fluid parameters, complications of surgery, recurrence rate and patient satisfaction. SPSS 25 was used for data analysis.
Results: Of the 60 patients, 20(33.3%) were in Group A and 40(66.6%) in Group B. Operative time was shorter in Group B (p=0.066), but it was shorter in Group A in cases of bilateral varicocele (p=0.005).Mean duration of analgesia need was significantly lower in Group A compared to Group B (p= 0.001). Significant post-operative improvement in sperm count and motility was detected in both groups (p<0.05).
Conclusion: Both techniques were found to be effective in treating varicocele with a reasonable safety profile.
Keywords: Varicocelectomy, Laparoscopic, Ppeninguinal, Iraq. (JPMA 69: S-73 (Suppl. 3); 2019)

Varicocele is defined as varicosity and tortuosity of this plexus around the funiculus spermaticus and testis, which results from retrograde blood flow through the internal spermatic vein due to incompetent valves. It is one of the main correctable causes of male infertility.1 It is encountered in 10-15% of the male population. While this rate is 21-41% for males with primary infertility, it may increase up to 70-80% in males with secondary infertility. 2  It may be because of three anatomical causes; the vein on the left side connects with the larger outflowing vein at a right angle; the valves that are supposed to prevent backflow fail which is called  venous insufficiency; and, finally, the pressure in upstream arteries creates a 'nutcracker' syndrome. 3  The relationship between varicocele and infertility is unclear. The effect of varicocele on sperm function includes damage via excess heat caused by blood pooling and oxidative stress. 4  Varicocele may present as soft lumps, usually above the testicle and mostly on the left side of the scrotum. 5  Bilateral and right-sided varicocele may also occur. Also, patients can feel symptoms of pain or heaviness and sometimes it is discovered when investigating the cause of male infertility. 6  It can be confirmed with high-resolution colour-flow Doppler ultrasound, which will shows dilation of the vessels of the pampiniform plexus, typically more than 3mm in diameter. 7  Testicular strain elastrography has a potential effect in terms of identifying varicocele patients. 8  There are no effective medical treatments other than surgical procedures. If a varicocele is causing pain or discomfort, the use of analgesics and scrotal support can be used initially. 8  Treatment options include percutaneous embolisation of the gonadal vein. Percutaneous occlusion is a suitable treatment option for persistent/recurrent varicoceles. 9  Surgical repair remains the most popular form of treatment for varicocele and it can be achieved by conventional open varicocelectomy (retroperitoneal high ligation, inguinal and sub-inguinal ligation), laparoscopic varicocelectomy and microsurgical varicocelectomy. 10  Although open varicocelectomy is performed under general or spinal anaesthesia on an outpatient basis, in selected patients it can be performed under local/regional blockage with or without intravenous (IV) sedation. 11  Laparoscopic varicocelectomy has the advantage of isolating the internal spermatic veins proximally. It is generally performed transperitoneally, but extra- or retro-peritoneal approaches have also been described, with recurrence rate of laparoscopic varicocelectomy being 6-15%.12  Complications of laparoscopic varicocelectomy has been reported around 8-12%, and include air embolism, genitofemoral nerve injury, hydrocele, intestinal injury and peritonitis. 13  In Iraq, varicocelecetomy is usually performed by the urologists and general surgeons, and the commonest surgical approach is the open inguinal. In the last 10 years, Laparoscopic varicocelectomy has also been introduced and is preferred by some surgeons and patients. The current study was planned to compare the outcome of open inguinal and laparoscopic varicocelectomy in a group of Iraqi patients.

The comparative prospective interventional study was conducted in the Department of Surgery at Al-Yarmouk Teaching Hospital, Baghdad, Iraq, and in a private hospital in Baghdad province from January 2016 to January 2018. The study was approved by local ethical committee and consent was obtained from the participants for the study. Those included were adult male patients aged 18 years or above with clinical varicocele who presented with either a history of infertility (primary or secondary) or were complaining of pain related to varicocele, and furnished consent to participate in the study. Those who were lost to follow-up were excluded. Varicocele was diagnosed and graded as follows: Grade I: Small varicocele, detected by palpation with difficulty but easily by Valsalva's manoeuvre; Grade II: Moderate grade, easily detected by palpation without Valsalva's manoeuvre; and Grade-III: Large varicocele, visually detected at adistance. The laterality (unilateral or bilateral) of varicocele was determined and it was confirmed  using colour Doppler ultrasound.The patients were assigned to two groups on the basis of their own informed choice between laproscopic and open inguinal surgery. Group A had those who opted for the laproscopic option, while Group B preferred to undergo open inguinal surgery. Preoperative seminal fluid analysis was done for all patients using the masturbation method after 3-4 days' abstinence, and the World Health Organisation (WHO) 2010 reference values for human sperm were used which means sperm count >15 million/ml and progressive sperm motility >32%.14  As for the open inguinal varicocelectomy, it was done under general or spinal anaesthesia, and the patient was placed in a reversed Trendelenburg position. A 3-5cm incision was made through the skin and the subcutaneous tissue just over the pubic tubericle where the spermatic cord could be seen emerging through the superficial inguinal ring, and by meticulous dissection all the dilated spermatic veins and cremasteric veins were isolated and then ligated and divided. For laparoscopic varicocelectomy, the patients were operated by insufflated laparoscopic varicocele ligation. In a supine position and after the induction of general endotracheal anaesthesia, a 10mm port was placed supraumbilically by open (Hasson) method. After adequate pneumoperitoneum, the laparoscope was inserted and under direct laparoscopic vision, two other 5mm working ports were placed in the lower abdomen according to the laterality of varicocele. Spermatic vessels were exposed by T-shaped peritoneotomy. Clipping of spermatic veins was done doubly without division. Care was taken for spermatic arteries. The ports were closed in a standard fashion. Postoperative assessments were done for a minimum of six months; first on the 3rd day, second on the 12th day, third after 72 days and the last after six months which included history, physical examination and scrotal ultrasonography to detect the success of surgery (disappearance or decrease in varicocele clinically / cessation of venous reflux by colour Doppler) and to detect complications; early ashematoma, wound infection, or late as recurrence, and testicular atrophy, throughout the follow-up period. Post-operative seminal fluid analysis was usually conducted on the 72-dayfollowup visit. Paracetamol IV vials were given to all patients post-operatively as analgesia. The hospital stay was calculated by the number of hours till the discharge. The operative time was recorded from the time of incision till closure of the wound/ports. Data was analysed using SPSS 25 and was presented as mean, standard deviation (SD) and ranges. Categorical data was presented as frequencies and percentages. Pearson's Chi-square test was used to assess the statistical association between patients' characteristics and complications. Independent t-test (two-tailed) was used to compare continuous variables between the groups. P<0.05 was considered significant. 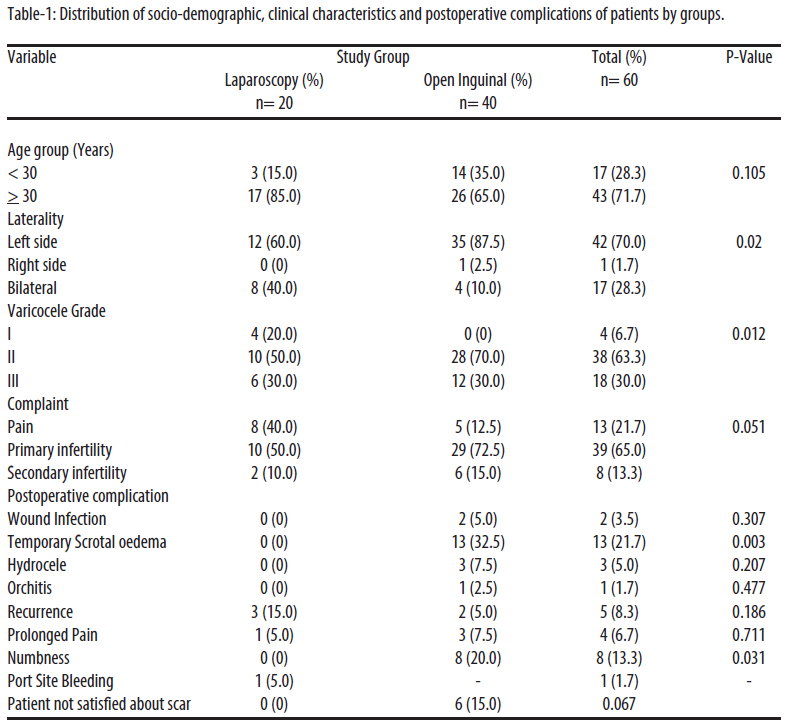 In semen analysis, there was statistically significant postoperative improvement in the sperm count and progressive motility in both groups (P<0.05) (Table-3).

Varicocele is the most common and correctable reason for male infertility and erectile dysfunction. 15  It could be treated with many different options including radiological, laparoscopic and open surgical approaches. 16  However, the most effective method in terms of outcome and post-operative complications is still not determined. 17  Reports have suggested that laproscopic varicocele ligation has the advantages of reduced morbidity, analgesic requirements and a more rapid rate of return to work compared with the standard open surgical approach. 18,19  In the present study, the majority of patients had leftsided varicocele, and the finding is in accordance with literature. 20  Varicoceles are more common on the left side as the left testicular vein enters the left renal vein at right angle, in addition to the lack of anti-reflux valves. In the current study, most patients had grade II varicocele, which differs from an earlier study. 21  The difference might be due to the time of varicocele diagnosis via regular or irregular medical check-ups. Mean duration of analgesia needed in this study was significantly lower in laproscopic patients, while the duration of operation in overall patients was lower in those who underwent open surgery. This is in agreement with a study. 22 Concerning the duration of operation and analgesia needed for bilateral cases, they were significantly lower in this study in Group A than that in Group B, and the finding matches earlier results. 23,24 In the current study, there was significant postoperative improvement in the sperm count and progressive motility in both groups. This result agreed with some studies. 20,22 and differed from a study which did not show any significant changes after varicocelectomy. 25  The differences might be attributed to the sample size, and the pre-operative semen parameters might have been within normal range and irreversible damage to the testes could exist. In the current study, laproscopy did not lead to wound infection, temporary scrotal oedema, hydrocoele, orchitis or numbness, whereas among those who opted for open surgery, these complications were 5%, 32.5%, 7.5%, 2.5%, and 20% respectively. Scrotal oedema encountered in this series was transient and quickly resolved after wearing scrotal support. In spite of these local complications, 85% patients in the group were satisfied with their choice and the subsequent scar. Bleeding from the port site occurred in one patient in the laproscopic group (5%). This differed from a study in 2017 in which the complication occurred in both open and laproscopy groups (5.7% vs. 3.3% respectively) 21  and the rate of hydrocoele was 6.9% in laproscopy and 9.7% in the open surgery group. 26  Post-varicocelectomy hydrocoele may occur due to ligation of the lymphatic vessels that are colourless and are sometimes mistaken for veins. Also, surgeon's experience and theatre environment determine the complication rate as well. Finally, in this study, pain was more prolonged in the open surgery group, while the recurrence rate was higher in the laproscopy group. This is in line with earlier studies. 20,22  The variation in post-operative pain and recurrence rate between the two groups might have been due to the fact that in the laproscopy group, only high ligation technique was used, while in inguinal ligation, cremasteric veins can also be ligated and there is extensive dissection required in the open technique.

Both techniques were found to be effective in treating the varicocele-related morbidities, like infertility and pain, and the safety profile of the procedures was reasonable.