Objectives: To identify antibiotic susceptibility and resistance of bacterial strains responsible for urinary tract infections in children.
Methods: The cross-sectional study was conducted from June to December 2017 at the Central Teaching Hospital, Baghdad, Iraq, and comprised patients aged between one day and 15 years who were brought to the emergency department and were diagnosed as having urinary tract infections. Urine samples were cultured on appropriate media and the isolated organisms were identified. The susceptibility of bacteria-causing urinary tract infection to different antimicrobial agents was investigated using antibiotic discs. Data was analysed using SPSS 24.
Results: Of the 155 patients, 78(50.3%) were girls and 77(49.7%) were boys. The highest number of patients 55(35.5%) were aged <1 year. The most common organism encountered in the study were Escherichia coli 78(50.followed by Klebsiella pneumonia 21(13.5%). Among the Escherichia coli isolates,54(69.2%) were resistant to ceftriaxone, 50(64.1%)to ampicillin and 38(48.7%) to ciprofloxacin.
Conclusions: Escherichia coli was found to be most predominant organism causing urinary tract infection, and it was resistant, among others, to ceftriaxone, ampicillin and ciprofloxacin.
Keywords: Antibiotic susceptibility, Antibiotic resistance, Urinary infection, Bacterial infection, Paediatrics. (JPMA 69: S-59 (Suppl. 3); 2019)

Urinary tract infection (UTI) is one of the most common bacterial infections in children and one of the major causes of admission to hospitals.1 UTIs are considered the most common infections after the upper respiratory tract infections (URTIs). 2 The prevalence of UTIs varies with age. During the 1st year of life, it is more common in males, the male-tofemale ratio being 2.8-5.4-to-1. Beyond 1-2 years, there is a female preponderance, with the male-to-female ratio being 1-to-10. In boys, most UTIs occur during the 1st yr of life and are much more common in uncircumcised boys. In girls, the first UTI usually occurs by the age of 5 year, with peaks observed during infancy and toilet training. 3The most common causative agents of UTIs are Escherichia (E.) coli, Klebsiella (K.), Pseudomonas (P.), other gram-negative enteric bacilli, such as Proteus, and other agents such as group B streptococci, staphylococci  (S.), Candida (C.) albicans and microorganisms belonging to the flora of vagina and periurethral region. 1 UTIs may be asymptomatic or symptomatic and may cause mortality due to sepsis, and pyelonephritis at younger ages, and recurrent UTI especially may cause serious long-term complications such as hypertension (HTN) and end-stage renal disease (ESRD). 4 Antibiotics play an important role in the treatment of UTIs. Choosing an antibiotic depends on various factors, such as the patients' past medical history, past hospital reports of other illnesses, their spontaneous cure rates and their antibiotic-resistance charts, the frequently identified aetiological agent, its antimicrobial sensitivity testing, its pharmacokinetics its toxicity, and the patients' age etc. 5 Multidrug resistance (MDR) is defined as resistance to two or more different structural classes of antimicrobial agents. MDR has become a universal phenomenon across organisms and may complicate the management of infections. Antibiotic resistance can cause serious damage and is an important public health problem. 6 The importance of infectious agent determination and susceptibility to antibiotics and the detection of resistance status are key factors in the diagnosis and proper treatment of UTI because of the increasing antibiotic resistance. 7 The misuse of antibiotics leads to possible adverse effect, super infection, increased cost of healthcare and the emergence of highly resistant strains of bacteria in the community. 8 The biochemical and genetic aspects of antibiotic resistance mechanisms have been discussed in literature 9 (Figure). 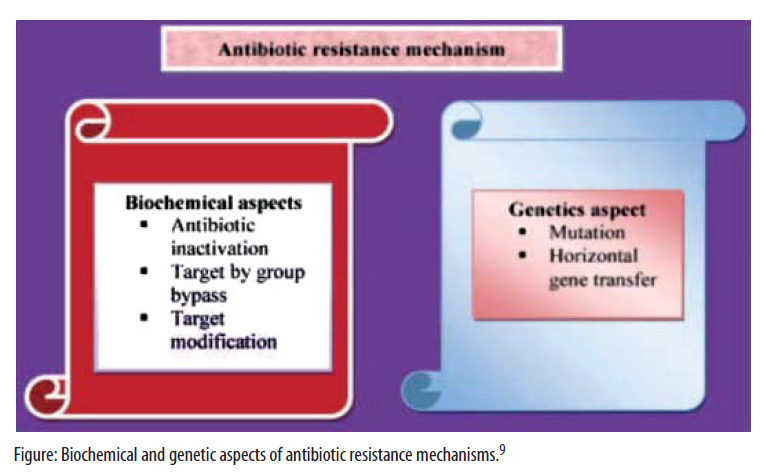 The current study was planned to obtain data on antibiotic susceptibility and resistance of bacterial strains responsible for UTIs in children.

The cross-sectional study was conducted from June to December 2017 at the Central Teaching Hospital, Baghdad, Iraq, and comprised patients aged between one day and 15 years who were brought to the emergency department (ED) and were diagnosed as having UTI. Those included had clinical symptoms of UTI, like fever,incontinence, dysuria, abdominal pain and vomiting, along with a growth of >105 CFU/mL in urine cultures. Those excluded were patients with incomplete data, growth of multiple microorganisms in the culture, and those who had known urological problems, such as vesico-ureteric reflux. After consent was obtained from the participants by talking and taking permission from the parents or thepatients if old enough, medical files were reviewed, and age, gender, clinical findings and culture results of the patients, antibiotic sensitivities, and resistance patterns were retrospectively evaluated. Urine samples from the non-toilet trained patients, aged 1day to 36 months, were obtained by clean catch collection method. Mid-stream urine was collected from toilet-trained children. The samples had been cultured immediately, but in samples that cannot be cultured within 4 hours of collection, the sample had been refrigerated. 10 Urine samples were sent to the laboratory where they were inoculated using a 4mm caliber loop on culture medias containing blood agar with 5% sheep blood and MacConkey agar (BioMark, India), andincubated at 37°C for 18-24 hours using an incubator (Fischer Scientific, Germany). In urine cultures with significant growth, bacterial identification was performed using standard conventional methods, including Analytical Profile Index (API) 20E, API 20 staph and gram stain. 11 After identification of the microorganism, antibiotic sensitivity test was done on Mueller-Hinton agar by  disc diffusion test (Mastdiscs, UK) againstsulfomethaxazole-trimetoprim (SXT) 25μg, ceftriaxone 30μg, cefixime 5μg ,ciprofloxacin 5μg, amikacin 30μg, nitrofurantoin 30μg, gentamicin 10μg, cefoxitin 30μg, cefepime 30μg, cephalothin 30μg, amoxycillinclavulanate 30μg, imipenem 5μg and ampicillin 25μg. Sensitivity and resistance were determined by measuring the diameter of zones around each drug according to Clinical Laboratory Standard Institute (CLSI) guidelines. 12 Data was first recorded in Excel and was then analysed using SPSS 24. Continuous variables were presented as means and standard deviations (SDs), while discrete variables were presented as frequencies and percentages. 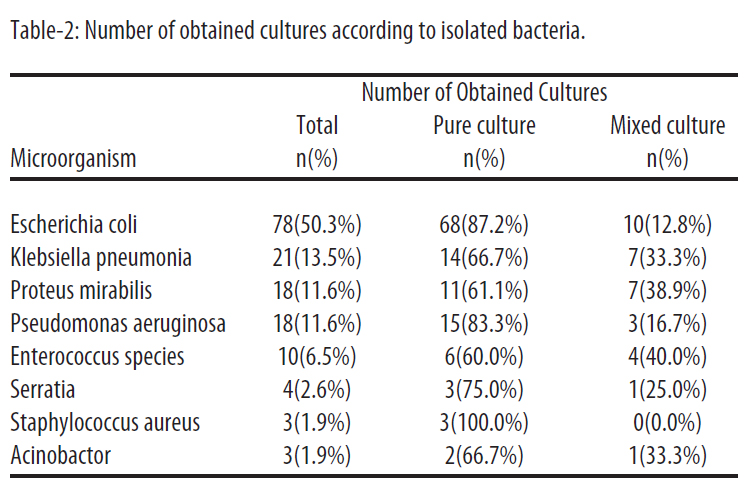 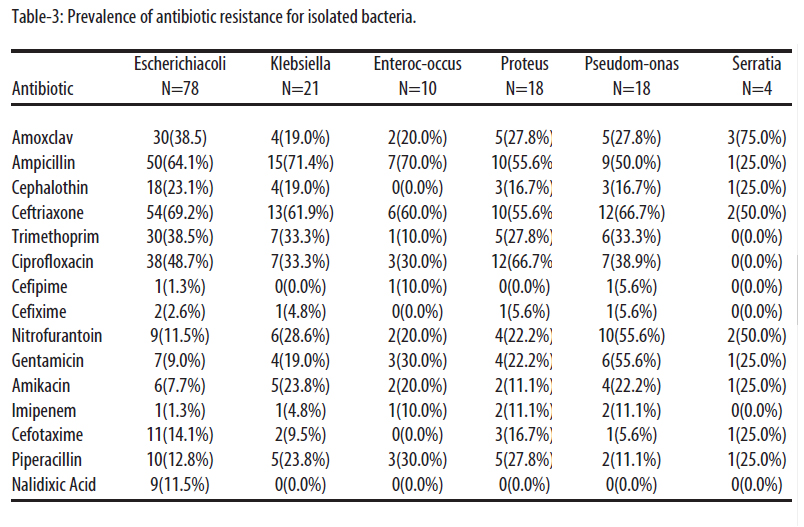 UTIs are some of the most common bacterial infections, affecting 150 million people each year worldwide. In 2007, in the United States alone, there were an estimated 10.5 million office visits for UTI symptoms (constituting 0.9% of all ambulatory visits) and 2-3 million ED visits. Serious sequelae include frequent recurrences, pyelonephritis with sepsis, renal damage in young children and complications caused by frequent antimicrobial use, such as high-level antibiotic resistance and Clostridium difficile colitis. 13 During infancy, boys are more likely to develop UTIs. After infancy, girls are much more likely to develop them. UTIs are more common among girls because their short urethras make it easier for bacteria to move up the urinary tract. 14 The findings of the current study agree with literature. 15,16In studies performed in various regions of the world, mostly E. coli have been isolated in UTIs. 17-21 In the current study as well, E. coli was the most common uropathogen identified either as a single or mixed culture. E. coli is the most common cause of UTI as it possesses a variety of virulence factors, which the organism uses to get attached, invade and injure the host. These virulence factors include adhesins, toxins, iron acquisition factors, lipopolysacharide capsules, and other invasins. 22The second microorganism implicated as a cause of UTI in this study was K. pneumoniae, which is in line with a study, 16 but S. aureus ranked second as a UTI cause in a study 15 and in another study, Proteus species ranked second as a UTI cause. 23These differences are related to the different risk factors associated with certain types of infections with particular microorganism such as age, comorbid conditions, and whether the infection is hospital-acquired or community-acquired. Proteus mirabilis and P. aeruginosa accounted for 11.6% of all species encountered as a UTI cause in this study. In one study. 16 Proteus accounted for 12.1%, while P. aeruginosa was the third predominant organism in another study. 24 However, Bagshaw et al. 25 recorded enterococci as the third most frequent uropathogen in intensive care unit (ICU)-acquired UTIs. This higher percentage of enterococcus species could be related to the fact that entercocccusis associated with approximately 15% cases of nosocomial UTIs in both children and adults. Nowadays, resistance is increasing and resistance pattern is changing because of careless and irregular use of antibiotics, especially in children with recurrent UTI. The resistant pattern of E.coli in the current study was nearly similar to other studies15,26-28 to the effect that most E. coli strains are resistant to ampicillin, ceftriaxone and a significant percentage were resistant to ciprofloxacin, while most E. coli species in the earlier studies were sensitive to amikacin, nitrofurantoin and nearly almost of them were sensitive to imipenem (Table-4).

It is significant to note that the current study and an earlier one 15 showed a higher resistance pattern of E. coli to SXT compared to the other studies cited above from Iraq, and this could be related to the widespread use of this antibiotic as a drug of first choice for UTIs in the country.  K. pneumoniae, the second most common cause ofculture-proven UTI in the current study, was resistant to ampicillin which is in line with a study conducted in Malaysia. 29

Most of the organisms implicated as a cause of UTI showed good sensitivity to imipenem, amikacin, nitrofurantoin and gentamicin. The high rate of resistant bacteria suggests that frequent and excessive use of antibiotics should be avoided in day-to-day practice.

Disclaimer: None,
Source of Funding: Our budget.
Conflict of Interest: None